posted 5 years ago
After many months of prep, scavenging and prep I had my first burn and it worked!

My rocket mass heater works but it won't for long.  I used some grey potters clay from work (Art reacher) for the heat riser top, and to seal the drum manifold to the fire brick.
It's fine until it dries out then it cracks and falls apart.  I was planning to use a big bead of it to seal the drum and them cement block around and backfill with perlite, around the feed tube and burn chamber.

Why didn't you use cob newbie?  Well on short notice I can't find any, and it's just me working on this flippin thing.  I don't have a gaggle of hippies to help me make a bunch of cob either.  No offence I was once a dirty foot myself.

So is there anything I can seal the drum to the brick with, that isn't cob intensive? Could I replace the grey clay with a cob mixture and then insulate with a perlite box?

I assume at some point when I find a good stash of clay I will cob the sucker in but for no I am trying to get this going in the greenhouse this week so we can get our seedlings going. Time i of the essence here.

Also, when it was burning well, when the clay was moist and made a good seal it was burning clean with a bunch of steam coming out of the chimney.  Does anybody have any condensation problems in the last leg of the exhaust pipes?  Can that be an issue?
IMG_0147.jpg 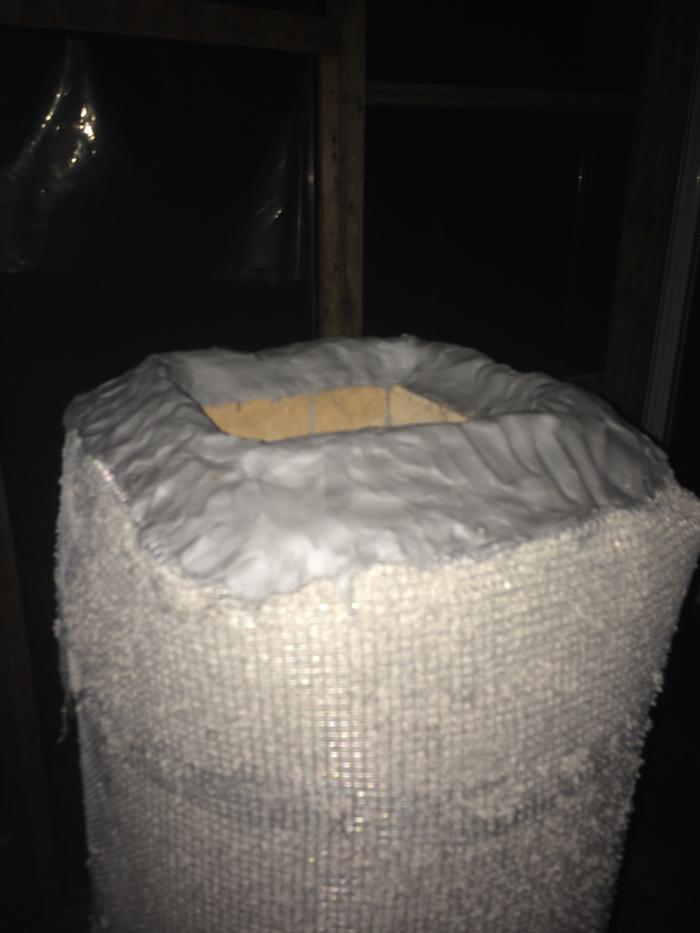 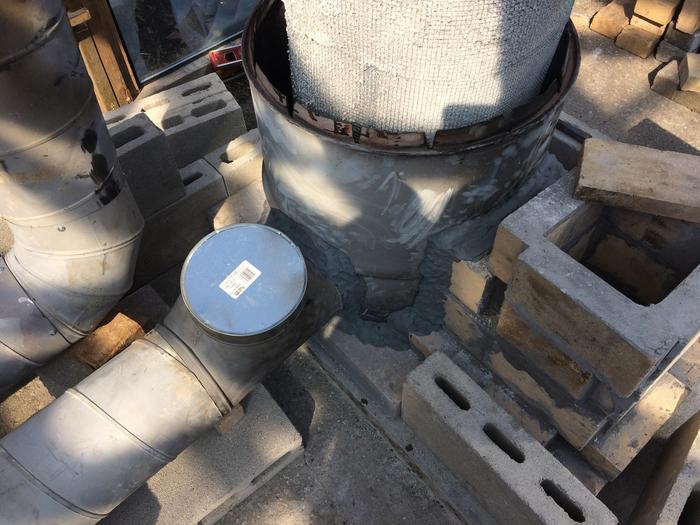 Byron Campbell
pollinator
Posts: 293
Location: US, East Tennessee
34
posted 5 years ago
Pure clay without any sand? Even when clay is used in the recommended mortar mix with quality (sharp granules) masons sand (typically 1 part clay to 3-1/2 ~ 4 parts sand), it will still crack when in direct contact with steel (1/2 barrel "manifold" area etc.) unless an expansion joint is employed. For a "straw cob free" expansion joint on my stove, the 1/2 barrel "manifold", including the burn chamber, is wrapped in 1-inch thick ceramic fiber blanket insulation. Clay/sand mortar is used as fill between the blanket insulation and the face brick.

I've noticed that in my completed and fully dried out RMH, condensate will be developed in the ducting when the mass is cool. Once the mass is brought up to temperature with the first burn of the heating season, condensate is no longer developed (when burning seasoned wood, about 15% moisture content). Condensate will naturally be a little worse in an incomplete stove with really cool exhaust temperatures.

posted 5 years ago
Thank you for the answer.  So would I place the 1/2 barrel on top of the ceramic fiber at the bottom, and then stuff the blanket in the seams between the firebrick and metal lip?

Clay/sand mortar is used as fill between the blanket insulation and the face brick.

I can picture this, it's too early in the morning. To stick the blanket to the brick?

Aaron McKinley wrote:Thank you for the answer.  So would I place the 1/2 barrel on top of the ceramic fiber at the bottom, and then stuff the blanket in the seams between the firebrick and metal lip?

"Clay/sand mortar is used as fill between the blanket insulation and the face brick."

Aaron McKinley wrote: I can't picture this, it's too early in the morning. To stick the blanket to the brick?

Just to fill the gap between the insulation and facing (brick, block, etc.) to hold the insulation firmly in place. Other fill options include stuffing in additional ceramic fiber in the gaps, or use clay stabilized perlite for filler.

posted 5 years ago
Thank you it makes more sense now.   So I will rehydrate the clay and mix it in the ratio of 1 part clay to 3 to 4 parts sand (construction/course) and fill any larger gaps between the ceramic fiber and the fire brick.

So when the 1/2 barrel rests on the ceramic fibre, that is all it needs to seal?

Also, for the T-pipe coming out of the barrel, should I stuff the ceramic fibre in the gaps and then then use the aluminum tape to seal?

Thanks for the help, so close to using this beast of a project.

posted 5 years ago
OK I am on the search for the ceramic fibre blankets and that stuff is hard to find and expensive.  Has any body used Roxul Insulation or fire stove gasket instead?

Just trying to be creative here, without paying an arm and a leg for something I only need a little off.