Something's in my liquid culture jars

Jon La Foy
Posts: 104
Location: Hopkinsville, KY (Western KY) Zone 7
2
posted 3 years ago
I'm new to the mycology world so this is my first time using LC jars. I did my daily checks and noticed a gel like substance growing/floating at the top of one jar. It looks like it might have some fuzzy stuff in the middle. Anybody have any idea what it is and how I should remove it? Thanks in advance.
20170330_195940.jpg 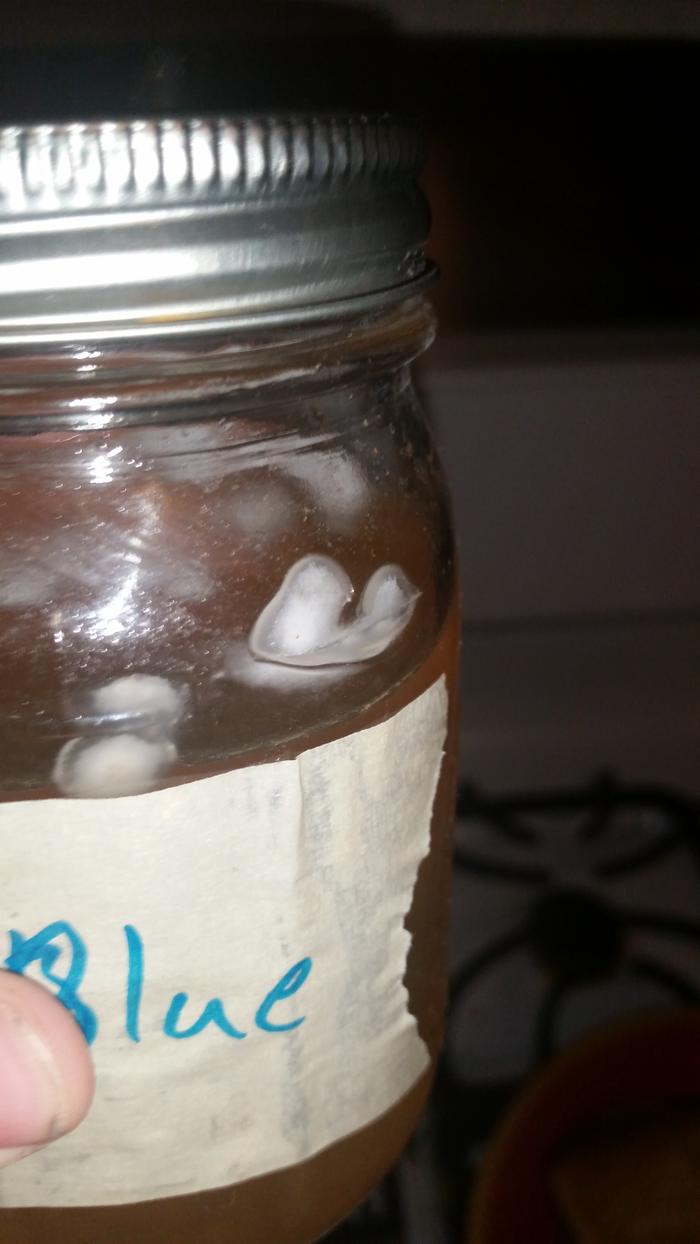 Jim Patalano
Posts: 17
2
posted 3 years ago
Any reason to think it isn't the mycelium? A white "gel like substance" with "fuzzy stuff in the middle" certainly sounds pretty typical of mycelium. Did you innoculate these recently or is this an older jar?

The floating on the surface of the water is a bit weird but doesn't tell me anything per se. Could easily be the mycelium you are trying to grow.

Another compounding factor here -- LC contaminants, in general, don't visibly look different than healthy mycelium. In other words, generally with LCs its difficult to tell if you have a success or a contamination just by looking at it. Everything pretty much looks like a fuzzy white cloud.

My recommendation is to let it sit and see what happens. Definitely DONT open the jar and try to get it out-- unless you have a HEPA flow hood and really good sterile technique. That's a surefire way to contaminate it.

One thing you should do, either right now, or after letting it sit for a few days to get more growth, is to suck that LC up into a syringe and inject it into a test jar of spawn. Homemade LCs can't be verified as clean until the culture is grown out on agar or grain, so its generally recommended to do a single test jar in this manner before doing a massive amount of innoculation. In any case, testing your LC on some grain spawn will tell you a lot more about whats going on.

Make sure not to contaminate the jar when you use the LC-- you have an injection port on that lid, right? If you jave a hole-with-tape instead of an injection port than I would recommend building a still air box for doing that.
Jon La Foy
Posts: 104
Location: Hopkinsville, KY (Western KY) Zone 7
2
posted 3 years ago

Cybil Opsin wrote:Any reason to think it isn't the mycelium? A white "gel like substance" with "fuzzy stuff in the middle" certainly sounds pretty typical of mycelium. Did you innoculate these recently or is this an older jar?
...

Well, I wish your post had come sooner.  I already opened it, in a clean environment, and removed the floating fungus with a sterilized spoon.  So far I have not seen any more complications and the mycelium appears to be healthy.
I suppose the stuff could have been mycelium for the mushrooms, but it looked so different I assumed it wasn't. If it comes back, or if anything else appears, I'll take your advice and try to spawn it.
I do have self healing ports which make things way easier.  And this is the first time these jars have ever been used for anything.
Thanks for your reply and advice
Casey Williams
Posts: 36
3
I like...

posted 3 years ago
It was more than likely the mycelium that you were seeing. Mycelium suspended in liquid looks quite different than mycelium growing on an object. As previously mentioned, it is never a good idea to open your LC jars unless you have a glove box or flow hood. I pretty much never open my jars unless I am emptying the contents.

One other thing you can do in the future to check for contaminants is to just let the jar sit for several days without stirring. The mycelium may come to the top for air, but if any other organisms are present, they will also come up for air. You'll see (usually) green or black contaminants on colonizing the top of the liquid if they are present.
Jon La Foy
Posts: 104
Location: Hopkinsville, KY (Western KY) Zone 7
2
posted 3 years ago

Casey Williams wrote:Mycelium suspended in liquid looks quite different than mycelium growing on an object.

This is why I thought it was something else... It looked nothing like the mycelium at the bottom of the jar. Thanks for the information.