posted 4 years ago
Intermediate Bulk Containers (known as IBC totes) are ubiquitous to the majority of industries in the USA. IBC’s are typically 275 gallon or 330 gallon capacity. IBC’s are commonly used only once to ship everything from vinegar to industrial chemicals from origination of the product to the end user. After they are used they are bought up by resellers and sold empty on the open market, craigslist has them listed in most markets. 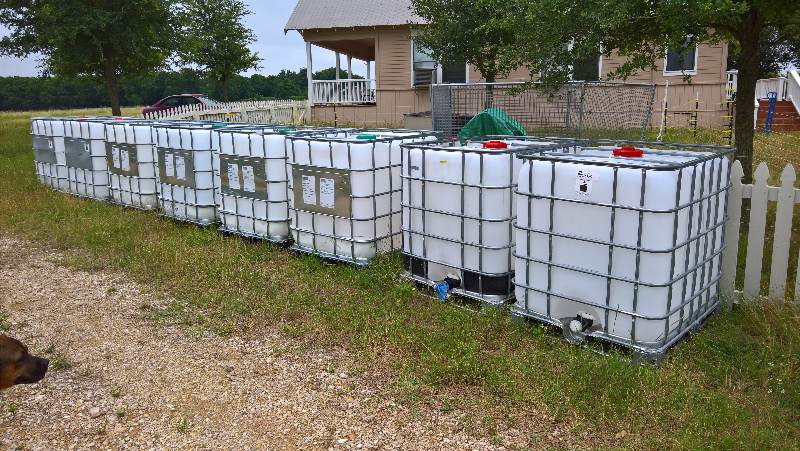 One issue I have when buying IBC’s from a large company is the concern that when hundreds or thousands of IBC’s are bought and sold it may be impossible to properly track each one in the process. I need to ensure that the IBC’s I bring in are food grade as chemical residue could harm livestock or the land. For this reason, I prefer to deal with small vendors who can guarantee the previous contents were food grade. I’m lucky enough to be working with a man named Steve who only sources IBC’s from one bakery.   Case in point- vinegar is often used to hide the smell of something else a container held. Vinegar is shipped in new IBC containers using red caps on the top, if your seller claims vinegar with any other color cap IBC this could be a case where they are hiding something with the vinegar smell. All the red cap IBC’s I buy from Steve obviously smell like vinegar, the other color ones do not. Caveat Emptor: know and trust your IBC tote source.

Potential uses of IBC totes on farm are endless from water storage, rain barrels, to aquaculture/aquaponics. I recently purchased a 75 gallon stock tank/water trough and paid almost $70 for it at the feed store. I decided to cut one of my 275 gallon IBC’s in to 2 tanks, one being approximately 150 gallons and the other roughly 100 (my cut wasn’t laser straight so I’m estimating slightly less volume for reckoning purpose). As I paid less than $70 for the IBC tote, it was like buying a larger 100 gallon tank for cheaper than the 75 gallon tank and getting an effectively ‘free’ 150 gallon tank to go with it.

Here is the process I used: 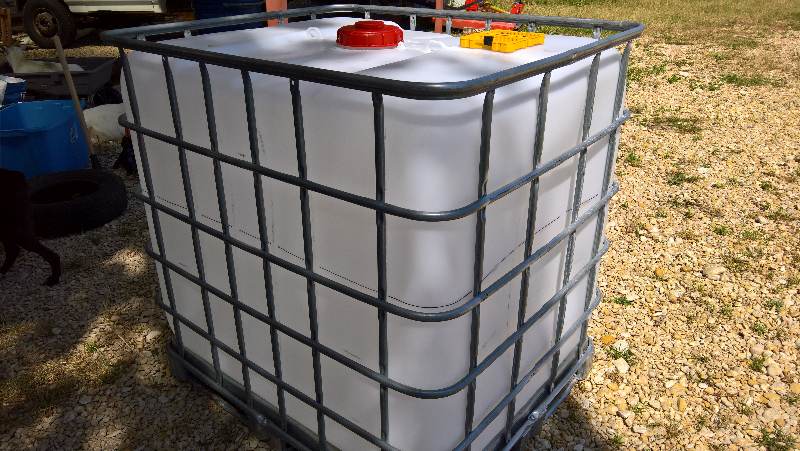 Mark the cut line prior to removing from cage, remove top bars 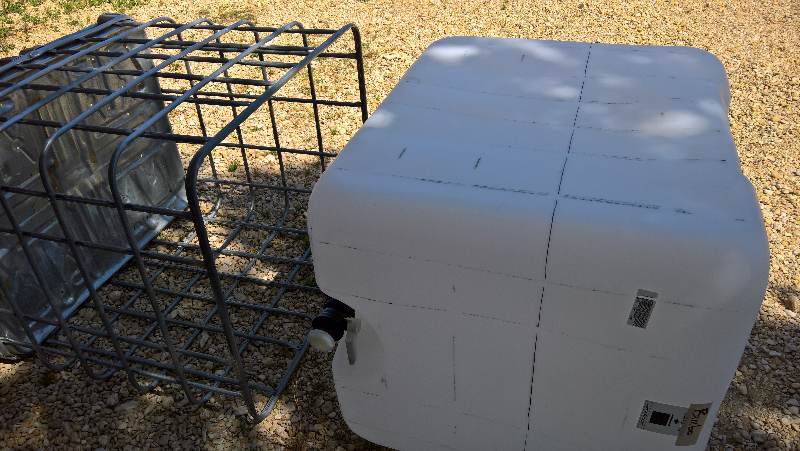 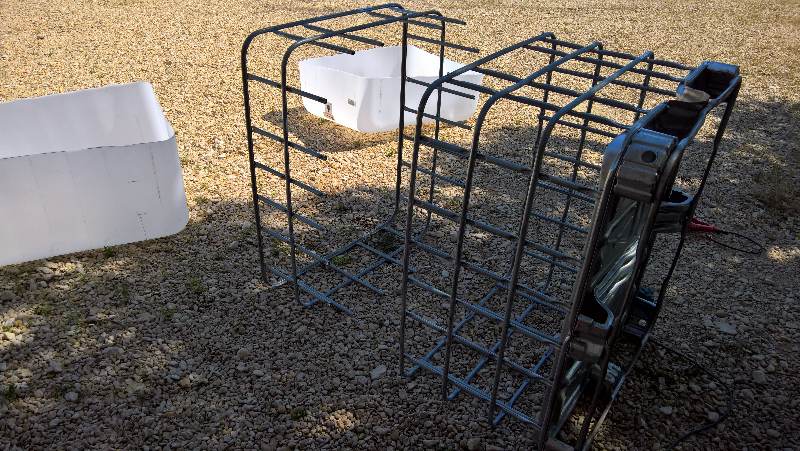 Cut cage and plastic with sawzall 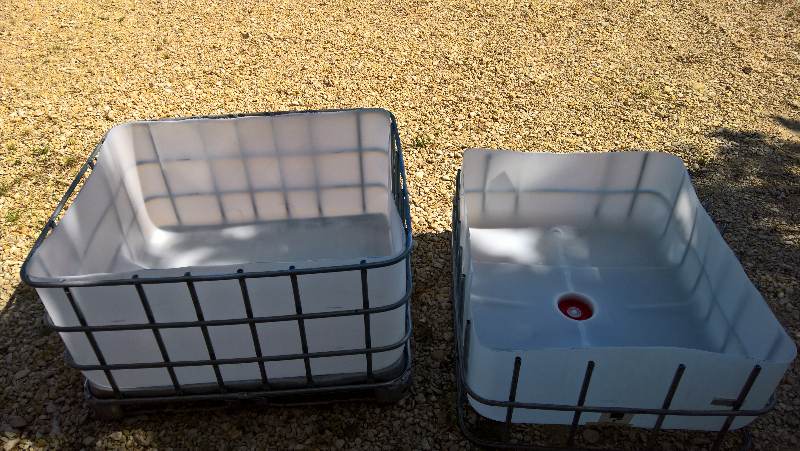 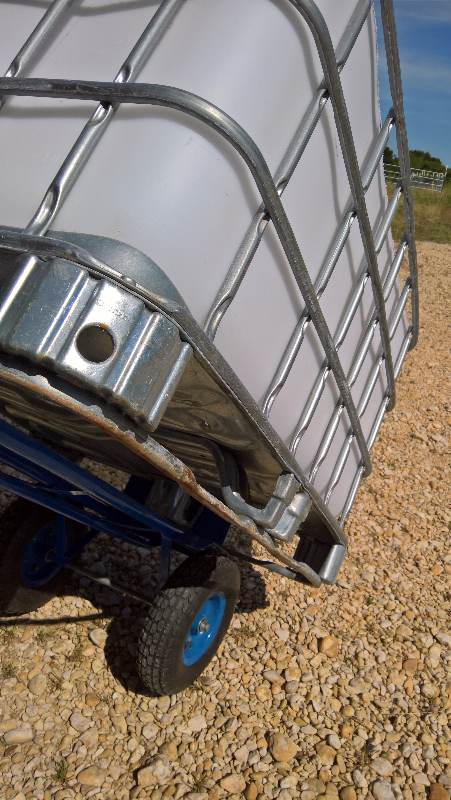 Easily move containers around pasture with large wheeled dolly, or one could use pallet forks on their tractor in the built in pallet.

I choose to make the lower section of the IBC the larger trough because it has a valve at the base making it easy to drain or add a float valve if wanted. I can manually dump the smaller container made from the top half. The metal cage adds a level of durability that the all plastic feed store trough lacks, one excited cow in the pasture could wreck the uncaged trough. 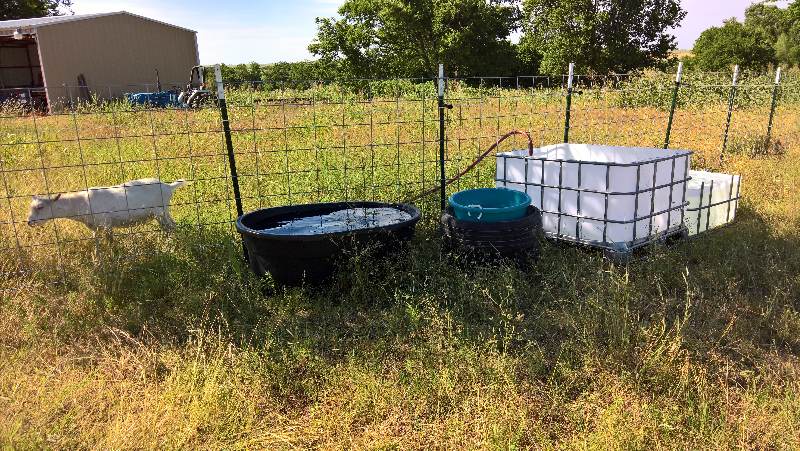 Above shows difference in containers. Small calves can’t reach the water in the 150 gallon trough, but can easily use the 100 gallon one. the 150 gallon trough is higher not only because of the larger volume, it also has the incorporated metal pallet at the base. Take note that the galvanized steel cage will definitely conduct the electrical charge from an electric fence, this was confirmed by  not paying attention when tipping it off the dolly. Logistically it means that I need to plan my daily pasture rotation using these troughs slightly off my polywire so they don’t ground out the system.
All in all I highly recommend chopping a food grade IBC for cattle water as a durable and economic option for your farm.
-Josh

http://www.1880farm.com Central Texas, USDA Zone 8b, Temperate Grassland, 34″ annual rain, 52 acres of bottom land, with approx 4-5 acres in young woodland and 2.2 acres in ponds (or tanks, as they are called in Texas)

posted 4 years ago
I wish IBC totes were more affordable in my area. I would have dozens of uses for them. They range in price from $275 -$300 each around here. Too pricy for a small operation like mine.

posted 4 years ago
Josh, are the cut edges of the tubs sharp? Do you worry about the animals cutting themselves when they drink?

posted 4 years ago
Miles I don't see any issues with sharp edges when using with cattle. I've seen my neighbors cattle using barbed wire fence to scratch themselves, the IBC trough edges are relatively blunt in direct comparison. Immediately after cutting, I ran a shop towel along the cut plastic to keep any small bits of plastic out of the drinking water, that edge is not sharp. I didn't smooth out the cut steel edges, but they are not that sharp either, though sharper than the plastic.  I would make sure to smooth the edges if I was going to use them for mini pools for ducks, geese, or any other smaller livestock. 80 grit sandpaper on an orbital sander would make quick work of smoothing the plastic. A lightly applied flapper disk on an angle grinder should round out the steel edges.

http://www.1880farm.com Central Texas, USDA Zone 8b, Temperate Grassland, 34″ annual rain, 52 acres of bottom land, with approx 4-5 acres in young woodland and 2.2 acres in ponds (or tanks, as they are called in Texas)

Cheryl Brociek
Posts: 8
posted 3 years ago
Thanks for posting, this is very helpful. Do you think if I laced it down on its side if it would be able to hold a 250 pound pig for a shelter? I know they come in different sizes and the one I am looking at is a 275 gallon container. I would put hay in there for bedding.