posted 3 years ago
Has anyone used the New Zealand-style shower dome (or anything related)?  The idea is to put a plastic dome over a shower, keeping hot water droplets in, thereby 1) keeping the shower hot and 2) reducing steam in the bathroom.  The latter also reduces the need to mechanically vent hot, moist air from the house, which is a waste in the winter when you want moisture and heat to stay inside).  The idea seems solid, and it seems pretty popular in NZ (where the idea originated, I think) but I'm puzzled why it hasn't spread.  I'm very tempted to build one myself out of the kind of thin acrylic that can be shaped by heating it with a hairdryer (used for things like model aircraft canopies) or something similar, but I wanted to see if others had tried this and had any advice first.
Sebastian Köln
Posts: 612
Location: Abkhazia · Cfa (humid subtropical) - temperate · clay soil
74
I like...

posted 3 years ago
Looks reasonable to me. However I would use a flat surface, as the benefits of a dome shape are not obvious to me (apart from looking fancier).
It might get a bit steamy in there though. I'd try it with a cheap top surface (plastic foil, possibly wrapping around some wood) first.
jim hughes
Posts: 97
Location: 6A
17
I like...

posted 3 years ago
The only showers I see this used on is the smaller ones but I would imagine it will scale. I have never thought or heard of this. good idea! We heat with wood, seems like a win win.
showerdome-moisture-info.jpg 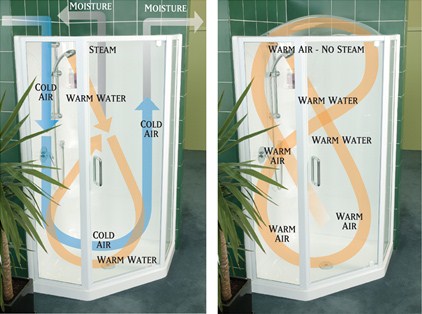 posted 3 years ago
Here is an Instructible on a Diy shower dome.

It also includes a very clever hands free valve, to control the flow of water.