Dale Hodgins
Posts: 9002
Location: Victoria British Columbia-Canada
676
posted 3 years ago
Eton microlink FR 160. It's a radio, flashlight and cell phone charger. It can be charged either by the built in solar panel, or by the hand crank.

I have found that it works quite well on AM and FM radio, as well as on a wideband station that gives weather reports. The flashlight is not terribly bright, but certainly much better than nothing at all.

After exhausting the battery, I turned off the radio and operated the crank at a medium pace, for one minute. This gave enough charge for the radio to operate at medium volume, for 12 minutes.

The cell phone charger works, but I didn't use it long enough to determine how long that takes.

I found this in the basement of a house that I prepared for moving, so I'm quite happy with the price.

I've seen devices like this in camping stores. Seems like a perfect one-size-fits-all Gadget, to take along when going anywhere that is distant from electricity. Being able to listen to the wide band or marine band or whatever they call that, is certainly a safety feature. The cell phone charger and flashlight could also be considered safety gear. 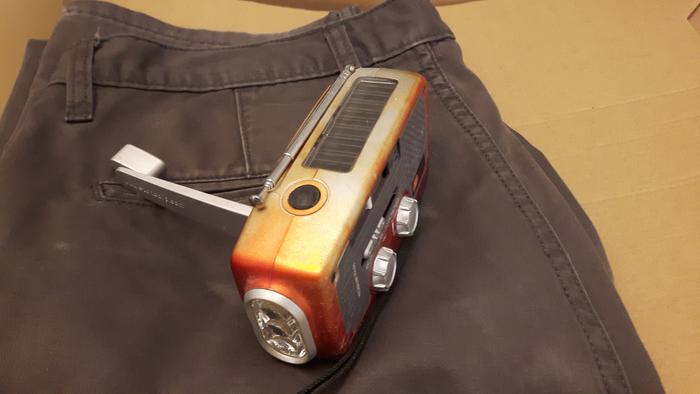 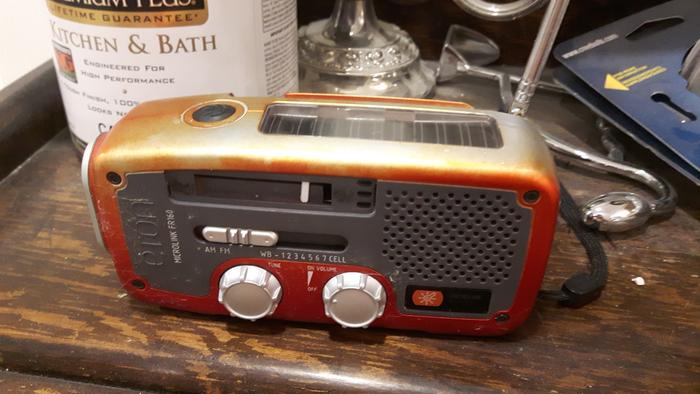 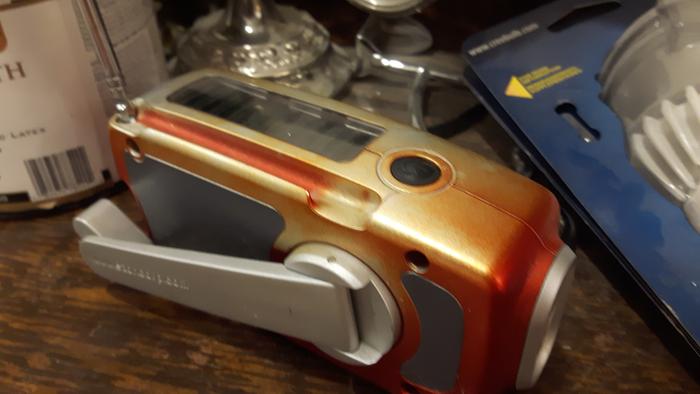 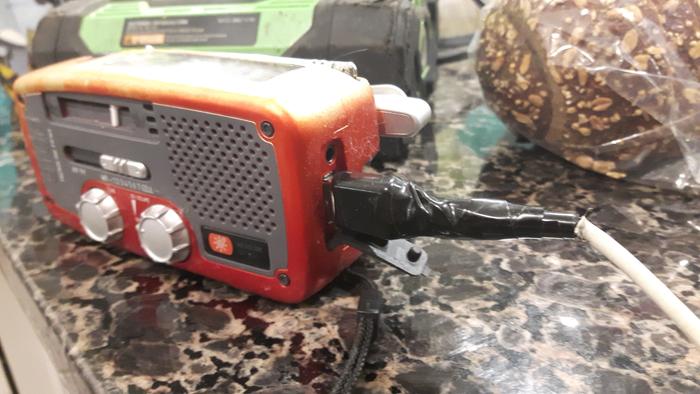 posted 3 years ago
I give this radio 8.5 out of 10 acorns. We've actually had the same little emergency radio for something like 7 or 8, maybe even 10 years. It's held up pretty well, all considering. The solar charger doesn't seem to really charge the thing, but the last time we took it out in the sun, like 2 years ago, it would run on just solar power (play at the loudest volume, which is reasonably loud). Take it out of the sun, and it'd die. If you had it off and "charging" and then tried to use it, it wouldn't run.

It doesn't take too many cranks to get a few minutes of music out of it--my husband would often get it going to distract our fussy babies...specially when they came to bother him when he was doing his "business" on his "throne." No privacy with kids...

The antenna, like most all antennae, is easy to break... especially when someone under the age of five gets their little hands on it.

Be careful with the volume dial. It likes to pop off, and sometimes when it goes back on, it's hard to get it working--it will spin, but it won't turn on. (The volume dial is also the on/off "button" for the radio).

It takes a LOT of cranks to charge a device. But, it does charge things.

We actually bought a similar little hand-crank emergency radio to send in our kids' Operation Christmas Child box (as well as a water filter and a screw driver set. Some fill their boxes with toys--we put a few in, of course, but put mostly useful things in there!).

Anyway, it's a handy little radio/flashlight and surprisingly durable. We use it to listen to music, to entertain our kids, in power outages for weather updates/light/and music, and as a flashlight when our kids have hidden/broken/misplaced all the other flashlights.

Dale Hodgins
Posts: 9002
Location: Victoria British Columbia-Canada
676
posted 3 years ago
Sounds like yours has been through the mill and back. I tried cranking it 20 times and leaving it overnight. It only worked for a very short time in the morning. But when I did the same thing and then used it immediately, it played a few songs on the radio before dying. So it seems that it has a poor battery. I have no idea how old this one is. As I said, it was free to me, as are many things that I find left behind in houses that are being torn down or moved.

I'm planning a trip to Africa, where I will bring this. I will probably give it to someone who could really use the phone charging feature, even if it's just to crank it a little during a call. My friend's phone is always at risk of running out, because there is a shortage of places to charge. I found that although it doesn't store power for charging, it produces plenty for a current call.

When using it as a radio, it's a great thing to go to sleep by. I often use my battery powered Makita radio, but it keeps playing long after I go to sleep. This one would quit within 10 minutes or so. Perfect.
Dale Hodgins
Posts: 9002
Location: Victoria British Columbia-Canada
676
posted 3 years ago
My friends in Kenya regularly experience blackouts, while eating supper. In order to prevent a total system breakdown, the whole place is on rolling blackouts. Everyone gets enough power to keep the fridge running, but it must be rationed. Electricity is not used for heat, for either space or cooking.

I tried turning the crank for 30 seconds, and then set up the light, focusing on the white cupboards and ceiling, in order to illuminate my 150 square foot kitchen. Not bright by any means, but certainly enough light that you could comfortably finish a meal. It continued to the 25 minute mark, but lost brightness after 15. It works half that long or less, when the radio is used in conjunction with the light. After 40 minutes, it gave just a slight glow, just enough so you could find it in a dark room.

It's been decided that this light will be left with my friend's mother, in Kenya when I return. I'm going to keep my eye on used Victoria, and if I'm able to find a few more of these, at a good price, I will take several of them on the trip. A simple little thing like this, that cost me nothing, can really make a difference for those who have no such device available.
20171201_103533.jpg 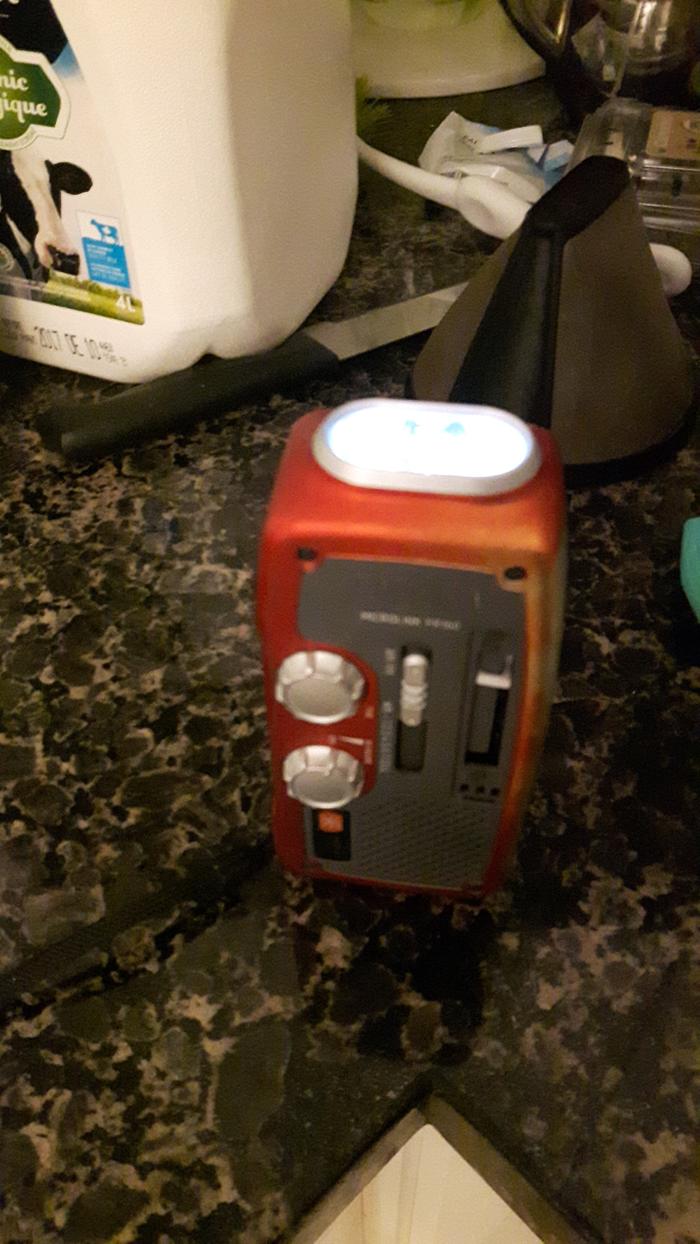