posted 2 years ago
I called my new chainsaw a rattle box, right off the dealership shelve and it has proven to be true. I try not to be negative, but I really do not want Permies to spend money on this saw thinking they are going to get something impressive. I have only had the saw now for 2 months, and cut 200 cord with it...maybe only 150 cord...but I never had the bar nuts rattle off on my other saws, Stihl or Husky. It is so bad on this saw that they actually have keeper lugs on the bar nuts so they don't get lost, and twice in 2 month now, I have had to replace one of the bar nuts despite this feature.

Today the top handle hand blew out on me. I was cutting some big spruce and was limbing one out...first twitch of course...and was like 'man this suspension is loose'. I know its got a better suspension than the Stihl, but this was excessive. It was; pretty hard when three point contact was only two. I finished the twitch, but even for me (not generally known for being super-safe), in the name of safety, I could not continue and had to stop and fix my saw...not what I wanted to do with rain coming in tomorrow.

I looked through my former parts-Husky's in trying to fix it, but their top handle design is different , and naturally the saw shop is closed on Mondays so I had to drill it out and put in my own bolt. I tried to find a Stihl bolt to fit just out of spite, but sadly could not find one, that way I could forever call it a Stihusky 562. For now I will stick with the name "Rattle Saw."

I rattles so bad I have had to replace the bolts twice now that hold the bucking dogs on, and while those three things are it so far (bar nuts twice, bucking dog bolts twice and top handle bolt), it is enough for a 2 month old saw.

The dealer told me it was a disposable saw, so I guess I cannot say I was not warned, but while only a $750 chainsaw, they could at least make it so it does not rattle itself apart!

It is also a VERY under-powered saw, and while tolerable if it is super sharp, the second it even remotely gets dull, it is screaming for another 16 cc's or so.

There are features I do like...its return to run feature, and its autotune which is very similar to electronic fuel injection on a car, but slightly different. Still as the days go by, and the cords add up; its showing itslack of durability. I would pass on this chainsaw.

Dale Hodgins
Posts: 9002
Location: Victoria British Columbia-Canada
666
posted 2 years ago
Send them a copy of this thread and promise to put a negative review in every spot on the internet where that could occur. They may have the wisdom to refund your money.

posted 2 years ago
I am an avowed fan of Husqy's. I had a 359XP for many years. It was a real workhorse until its piston blew. My only saw now is a 385. Its great but a little heavy for me. But put an 18" bar on it and it cuts like nobody's business.
I was hoping to get a 562XP to replace my dearly beloved 359XP as they dont make the 300 series anymore. So this is good to know. Maybe Ill buy my first stihl.
In my books $750 chainsaw is NOT A disposable its alot of money!  Are nt the 500 series the top of the line Husqs? If they are throwaways what does that say for the entire line?

I bought the saw based 100% on price. I had just mashed my MS 461 Stihl into the ground with my skidder after only a year of use, so I needed something, and for $400 less it seemed like it would get me by. I suppose it has, but it is just not holding up.

Maybe if I had not gone from a 76 cc saw down to a 60 cc saw the pill might be harder to swallow, but at the time $400 did not seem like it was worth 16 more cc's either. In all fairness there are things I like about the 562 like the autotune, which Stihl has as well, and soon the Stihl MS 461 will get a replacement model that has that feature, but it probably won't cost $1100 any more either.

I will say after all this, the return on investment on a chainsaw is incredible; they pay for themselves with the first load of wood, but darn I like that money in my pocket too, it did take 85 years for those trees to grow! 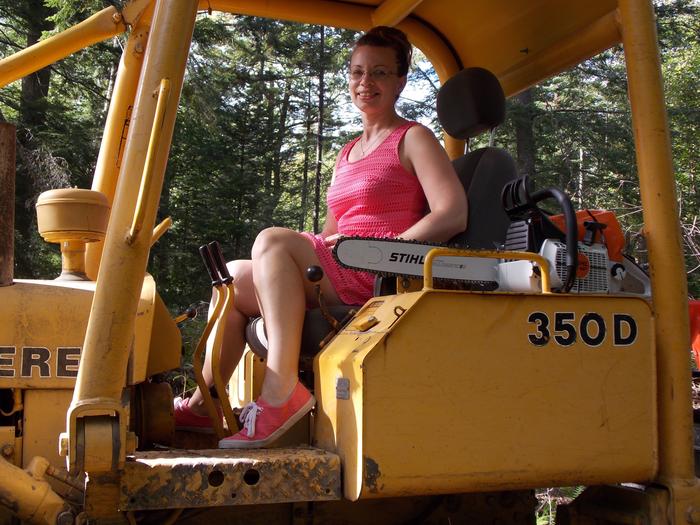 posted 2 years ago
Sorry to hear you got a dud.  My pops swears by the Huskies.  I've only used Stihls.

I have been known on occasion to under-tighten my bar nuts...pretty scary when that chain is whipping around without a cover.  If anything I over-tighten now.

posted 2 years ago
Travis,
I will mail you a 441 so you can have a good saw. People here buy them because they "need" a huge bar, but then sell them because you will surely cut your leg off if you are not pretty good at it. I have seen MS 660 here for $500 at a zip code that has no sizeable trees.

I have both Huskys and Stihls, and I am done with the huskys. They are too fragile, too commoditized. It is a shame, the Husky shop here is great- I just see them too much!