I knew better, but I did it anyway; Or Containing Flighty Chickens

G Freden
pollinator
Posts: 624
Location: West Yorkshire, UK
209
posted 4 years ago
Ok, here's the thing.  I've got a broody hen sitting on six white Leghorn eggs.  They're due to hatch in two weeks.  They might not hatch, but they probably will--and I will have six adorable fluffy little yellow escape artists.

I already have one Leghorn hen;  she's a brilliant egg layer, but also brilliant at getting over nearly every fence lower than 2 m.  My chickens for the most part coexist peacefully with my kitchen garden--except her (I still haven't forgiven her for the leeks).  I use the basic paddock shift method outlined by Paul, although my hens have a coop and run at the back of my very small suburban property.  They get moved to a new section of lawn or beds every week, but have permanent access to coop and run.

I'm chasing after the Leghorn most days;  sometimes multiple times a day.  I can't tell you how many times I've nearly wrung her neck;  the only thing that's stopped me is her amazing eggs.  Why did I say yes to more Leghorn eggs, generously given to me for free by a colleague?  Because they were free, I didn't have to search them out, arrange a meeting time, pay postage...whatever.  But mainly because of the eggs, those reliable, beautiful daily eggs, even in winter.  We wouldn't have had eggs last winter if it weren't for Leghorn Florry, despite the fact that she's two and a half.

Anyway.  To get to the point. 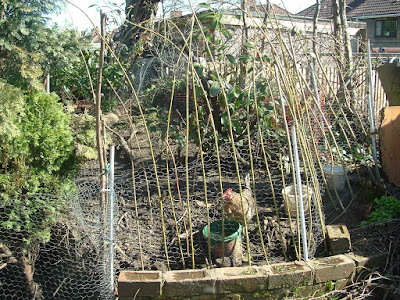 Here's a fence treatment that I have done, and it works.  They need to be 1-2 inches apart, or Florry just jumps up and shoulders between them.  That's Rock behind them, incidently.  I'm collecting straight-ish garden trimmings as fast as possible, to cover the chicken wire currently enclosing the veg patch.  It's a long piece of chicken wire, and I've only got about 1/5 of it done.  I've got another two or three months before judgement day, and by then, the main summer garden will be over, so hopefully damage will be limited anyway.

I hope these new chicks aren't all boys...

posted 4 years ago
A cattle panel chicken coop would keep her in.  Here is a thread about using them.  Use chicken wire to cover the cattle panel.

Anne Miller wrote:A cattle panel chicken coop would keep her in.  Here is a thread about using them.  Use chicken wire to cover the cattle panel.

That's a great design, for sure.

It's a difficult trade off between giving them fresh forage every week, and keeping them (her) contained.  I feel it's important to give them a new space regularly, both to break the parasite cycle, and also to keep them happy and interested so they don't start bullying each other.  My property is small--really really small!  A quarter of it is off limits to chickens for most of the year (veg patch).  And it's not even flat or square--it's certainly a job trying to wrangle a piece of chicken wire around shrubs and up mounds every week.  We've kept them fully confined once in the past, when required to by the government because of a bird flu outbreak.  They were in once spot for about three months, fully enclosed in chicken wire, and were the most miserable birds I've ever had.  They were so happy when I finally let them out;  I was happy too :)

I tried giving Florry (and her occasional partner in crime Rock who is just as flighty but at least gives up a lot quicker) a double amputation, i.e. clipping both wings, as the single was useless;  she was still hopping/climbing the 5 foot fence.  Turns out the double is useless too.  Ah well.

Mine aren't free range, really (except Florry, of course, who sees the fence as a jumping off point).  I move them around micro paddocks once a week, requiring mobile fencing--some lengths of chicken wire and a few poles in my case.  I can only do a chicken tractor on the lawn, which covers just about one quarter of the non-veg areas they are allowed in.  I'm doing my best to enclose the veg patch to keep her off it, even when she jumps the paddock fence.

Did I mention I'm both cheap and lazy?  That's probably the main reason Florry's still with us, now that I think of it.