posted 2 years ago
Hello all,
I am mainly a lurker here, who just gathers info, with an occasional reply thrown in about my experience or a question. So this is kind of a bit of an introduction thread. For close to ten years now, I have washed my clothes with a pedal-powered machine. Our first version, following plans found on a French web site, used a belt. And it really sucked, as the belt would slip a couple of times a minute, with breakage thrown in about once a month to boot. So we moved to a chain. And we later threw in a derailleur, for obvious reasons. Then later, we upgraded the drainage system, so that a valve would drain the machine (as opposed to the original drainage system -- a pipe that we moved from up to down, resulting in a few splashes each time). And now, we have moved to a pretty modern machine. And it's really cool, as it is very quiet now. Photos below
IMG_0162.JPG 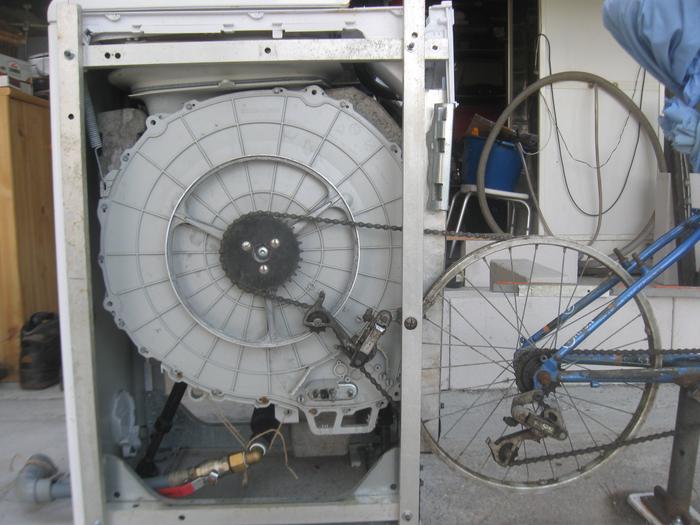 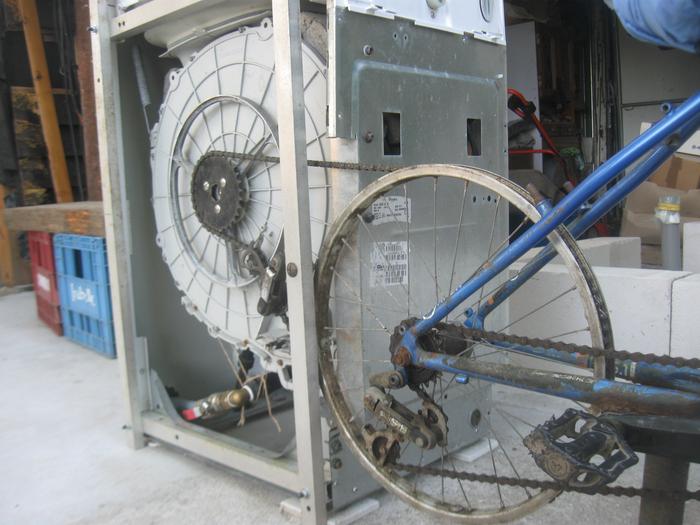 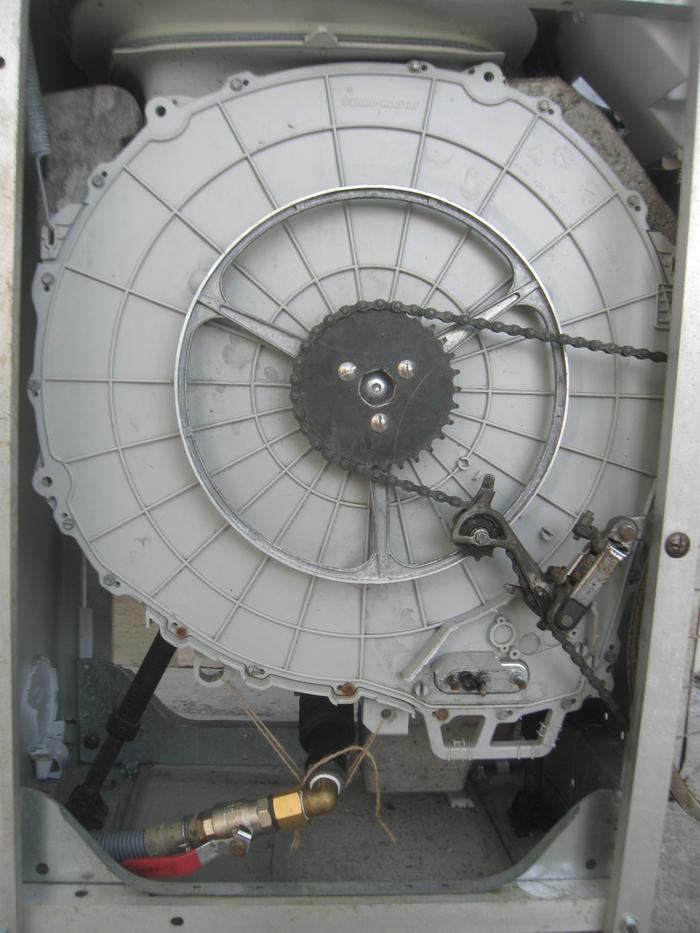 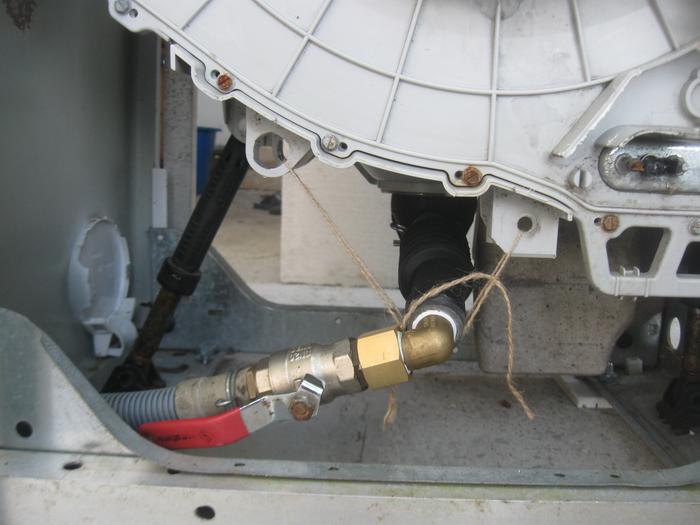 How long do you usually ride per load?

Also, how do you keep the chain from slipping on the bike rim?

There are two kinds of people.
1) Those who can extrapolate from incomplete data

posted 1 year ago
Thank you, Bryan!

I used to take forever to wash one load, frequently walking off and letting the laundry sit for a few hours, thinking I'm just doing the laundry passively. But, all it did was cause build-up in the outer tub, which was not easy to eliminate. Laundry works much better if we actually decide to do our laundry and spend an hour pedaling for the wash cycle, and then fifteen minutes each on two rinse cycles, plus 5 (or right now 10)) minutes of spinning after each of those three. That totals two hours of pedaling for the moment. We only needed to spin for five minute with the old machine, because we could have go faster, since it did not move. The new machine has already gone a few changes in trying to  reduce the machine movement, with the result of derailing. With the old machine, it never derailed. My husband put heavily modified screws in the rim of the bicycle to have that there are "spokes" on the rim for the chain to attach. I will try to take a picture of that, and what we are trying to do to reduce movement of the new machine. This is the old machine, which .ended up having some cracks in the metal pieces at the base of it, that were important, since they held it up. That was after close to 10 years of the machine being pedaled and probably just as many being powered by an electric motor. I figure that was pretty good of a life span.
IMG_0491.JPG 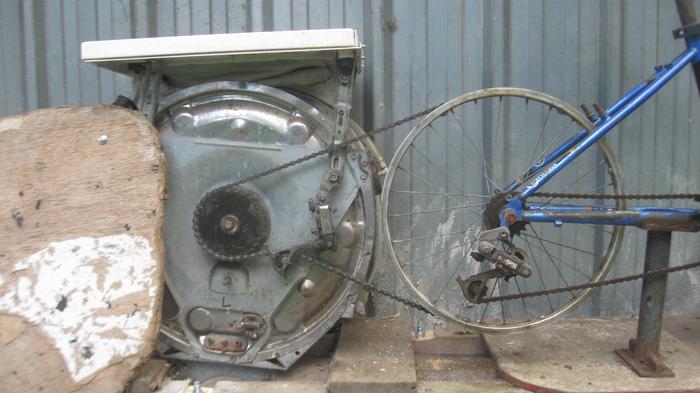 There are two kinds of people.
1) Those who can extrapolate from incomplete data

posted 1 year ago
It's at a very leisure pace for the wash and rinses, with a need for speed only on the spin cycle. But I do joke that it's how I keep my figure.
Richard Grimes
Posts: 5
Location: Southern Spain / Hampshire
posted 2 months ago
Hi Tiffaney and all.
That pedal washer looks awesome!
I am trying the same and have a way to go to stabilise, chain shorten, plumb in and make efficient.
As i dont have a water source near to where i need to keep it i was thinking of putting a drill pump on the fly wheel that i can drive and pump the water in from a rain barrel, and out again to the garden.
My problem is making a drive shaft from the flywheel that i can clamp the drill pump to.

I was thinking of attaching 4 L-brackets back to back (in a X) with a drill bit that will drive the pump.
Has anyone done this? I assume for strength it will need to be welded together and screwed to the wooden flywheel i have.

I would love to hear from anyone with experience of this.

Hope everyone can see the photo.
Thanks
Rich
Tiffaney Dex
Posts: 40
Location: La Bretagne
11
I like...

It's looking good. As far as pumping water, I know someone who set up a bicycle powered pump in a village in Namibia. It filled up an elevated holding tank, which gave the village pressure. I don't really know the specifics of how the pump worked, I know that they needed to pedal for one hour to fill up the tank. But I don't even know how big the tank was. I can ask him details about the system when I see him in a few weeks time. Would you like me to ask any specific questions?

To get the 7:1 ration, we made gear spokes from screws, which we put in a wheel, which turns the chain connected to the washing machine. The wheel we have now is bigger than our first original wheel. But we still need to find a bigger one. Also, washing works better if you can turn in two different directions. Which makes things more complicated, as the wheel has to be able to go "backwards." Normal bicycles only go forward. I believe there is something that can be done to change that, but we have never figured that out. We have just used the wheels as we found them.

Good luck and I will get back to you when I see my friend again.
Richard Grimes
Posts: 5
Location: Southern Spain / Hampshire
posted 2 months ago
Hello Tiffaney
Thanks for your reply!
I spent a year in Namibia (1989) what a coincidence! Lovely wild place.
I would love to hear about the village pump. I think i have the pump part sorted I just need to drive it from the bike.
I may have painted myself into a corner by not using the rear wheel like you have but it may open a new world of solutions too.
Mart Hale
pollinator
Posts: 441
87
I like...

posted 2 months ago
Very nice,   but I would want my bike with an electric hub motor ;-)

posted 2 months ago
Here is my mod to a bike ->