Winston Greene
Posts: 19
posted 3 years ago
Hello, My name is Joe and I'm a 28 year old farmer who just bought a farm about 45 minutes south of Kansas City. I'm sure this is a long shot but I'm currently looking for a partner to help me turn this farm into a sustainable working homestead. Ever since I was a kid my dream has been to make a living farming, I was a WWOOFER for a couple years in my wild/restless early 20's and I also managed a vegetable farm in Colorado for three years while getting my associate's degree in sustainable agriculture. I'm in the process of building my house which should be finished by the end of November along with my first outbuilding on 25 acres. There are about eight acres of nice pasture in the front and the rest is mostly woods up on a hill. Unlike most places in Kansas the house is situated on a south facing hill and I have about 150 feet of elevation, so there is a beautiful view of the surrounding area. Visible from the top of the hill about a half mile from the farm is a beautiful lake that has lots of catfish and a 3,000 acre wildlife area around it that is one of the best places in the state for hunting deer, geese and ducks. The house is about half finished and will be an earth-contact home with southern exposure. I'm planning on having a small storage unit business in the front to have some passive income that isn't dependent upon the weather as well, and I plan on having the construction of the storage units completed by the end of spring next year. Once my water is installed sometime during the next week I'll be able to start getting some livestock, I plan on goats and a couple of cows to start, with eventual plans for sheep and a small dairy focused on the production of feta cheese. I also have plans for a pastured poultry operation along the lines of the sort promoted by Joel Salatin, with a separate flock of about ten to fifteen egg layers to sell some eggs on the corner for some extra pocket money. Vegetable production with a focus on the nightshades (potatoes, tomatoes, peppers) is something I would really like to get going also, but I am only one man. I've heard it said that every successful farmer has a wife who works in town, but at this point I would be happy just to have someone out here to help me farm. My dreams might be too big to achieve all by myself without some help. I grew up in Kansas City but moved away as soon as I was old enough, moving back to the land of my youth has really been a trip. Compared to California or Colorado where I have farmed in the past, south eastern Kansas really is a sort of garden of eden. It's rare that it doesn't rain at least once a week during the growing season, the dirt is black and rich and I seem to see at least a deer or five every single day. My county has about ten thousand people in it and doesn't have a single stop light. I'm new but people are so friendly here that it already feels like home. I guess I had to go on a walkabout through the rest of the country to realize how special Kansas really is. I have a lot of family around here and they all keep telling me I need to find a girl but I guess I'm sort of a hermit and I've become fairly comfortable being alone. I attended a Buddhist college in Boulder, Colorado for a couple years but dropped out before finishing the degree in environmental science that I was pursuing. In the last few years I've rediscovered my Christian faith. I am in search of a like minded person who might be interested in helping me build this farm into the sustainable paradise that I know it can be. 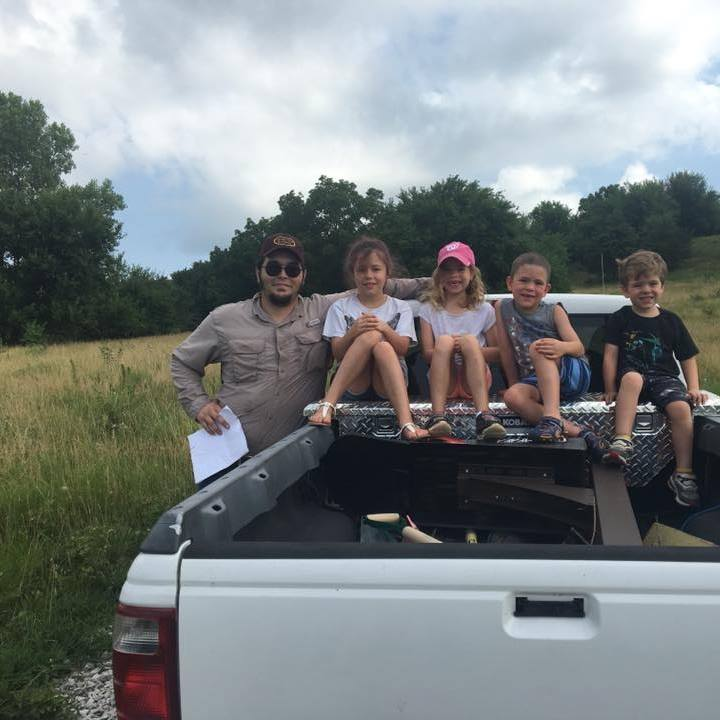 posted 3 years ago
I was just going to say, you are a 'busy' single dad.

S Bengi wrote:I was just going to say, you are a 'busy' single dad.

Lol yeah I can see how that picture would be confusing now in retrospect. I really just didn't have any other pictures of me on the farm at the time and my family came down for a blackberry picking day.

I was just searching “Kansas City” looking for homestead homies in my area.

I want to see your farm when you get it going!! I love farm tours. I learn so much but seeing what others do. I am newish to farming but I have a farmstand that I stocked daily all summer. Love growing nightshades as well! I also have a meat rabbitry. Need any bunnies?! 😝

posted 3 years ago
Sounds like you have landed a real nice spot Joe, and it sounds exciting what you plan to do. I only wish I had started at your age, but I'm glad I started at all. I just wanted to say best of luck and keep sharing with us as you progress.
Colin Sexton
Posts: 1
posted 1 year ago
You wouldn't happen to still need help would you? I just graduated high school and it's my dream to buy land and make it self sustaining while providing for all my needs. I'm currently doing an online permaculture course with 'Holistic Homestead' but I wish to further my education. I would love to help, but I need some more information on what you were thinking.
Melody Water
Posts: 8
posted 4 months ago
How can I get ahold of you? 28/f…already far out of KC’s energy but close enough distance wise… I’m wanting to take this lifestyle to the next level as I’m the only woman in my area who has this as my dream.