posted 2 years ago
I want to keep this as brief as possible to not lose anyone over the details. We've been trying to build something similar to an air well that could collect atmospheric water from our soon to be homestead in the chaparral desert. I want it to be as low tech, low energy input and cheap as possible in order to be able to replicate it. I did some research on the air well in this article: Air Wells But turns out its a massive complicated structure that doesnt produce as much water as you would imagine, I did research on other passive methods that could collect around 1 liter per square meter of surface used and other active methods that were able to collect a LOT more water but at the cost of being expensive and requiring large energy inputs, you can read a pretty lengthy review on many techniques here: A review: dew water collection.

Eventually this idea really got my attention, its a glass pyramid structure that is opened at night to collect moisture in the air and closed during the day so the hot sun can make the absorbed water evaporate, condense and be collected, its pretty nice knowing that it collects water AND helps to sort of clean it through evaporation. It seems it can collect up to 2.5 Liters a day and I mean, thats definitely the difference between life and death in us humans! Also, it can use different types of materials to collect moisture, from silica gel and a calcium chloride soaked cloth to newspaper and wood shavings. I believe thats more in tune with the permie philosophy. 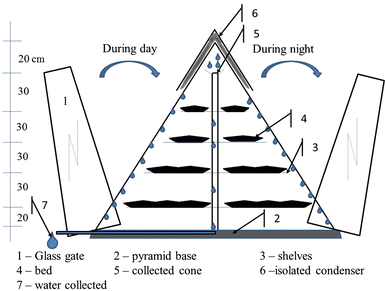 I love this idea but I would like to take it a bit further, what if one where to construct a large greenhouse like structure following this glass pyramid principle, hang large cotton cloths inside so that it could collect as much dew as possible at night and then make it evaporate and condense it during the day. Im imagining a sort of slim and long greenhouse like structure where you could hang things easily. This could also be used to literally dry washed clothing and collect the water from it. It could be an amazing multi purpose tool but Im thinking about how to build it in a way that actually works and to make it as cheap as possible. I would love to hear everyones ideas!
Joseph Lofthouse
steward

Collecting water from the atmosphere is all about location, location, location. Gotta have water in the air before it can be collected. It might be a great idea in a humid area, it really sucks in a desert that might have a dew point of 20F.

posted 2 years ago
Ah forgot to mention, there is definitely moisture at night since there are lichens and there is a lot of vegetation that grows around big rocks here. I imagine those are a small source of water since we only have 250 mm of annual precipitation.