We have a little knapweed problem, spreading up the road from Plum Creek lands into our native montane grassland at 6000' (along our road....oops).

There aren't any biocontrol agents that far up in the mountains, and I'm trying to get populations of two weevils started (root weevils and flower weevils).

Does anyone have/know of a property where I could go collect adult Knapweed Root Weevils (Cyphocleonus achates)?

Tips for public properties that might be good collection sites?  I know someone else out there has done this already....

You can get them for $1 per adult from http://www.bio-control.com, but I want to collect....

They are an introduced biocontrol that will feed on spotted or diffuse knapweed - I know they are really kick butt some places in the Bitterroot.

-Chris
Thomas Bassett
Posts: 3
Location: Missoula, MT
posted 9 years ago
There are a lot of great places in Missoula to gather bio-control insects.   The Cyphocleonus weevils in my backyard, in the Rattlesnake, are just finishing pupating and will emerge soon, probably in a couple of days.  So it is also probably a good time to collect Cyphocleonus down in the Missoula valley.    Unfortunately/fortunately, I don't have a significant amount of knapweed in my backyard, but I can recommend a few places in the Missoula valley that I have collected Cyphocleonus in the past.

I have collected bio-control insects on Mt. Sentinel and at Blue Mountain, as well as in several drainages in the area, but I think the best places to collect bio-control insects are in Missoula itself.  The place I've used the most is down by the railroad tracks where N 2nd St. E meets W Greenough Dr.  There is an unused patch of land that has a fair amount of large (sometimes gigantic, although I haven't checked this year) knapweed plants that supports a correspondingly large bio-control insect community.  In the past, I've seen some gigantic plants at The Osprey Stadium parking lot as well.  The bike path that follows the train tracks on the north side of town generally has a lot of knapweed too.

In general, for the Missoula valley, any place that has very large knapweed plants that have been established for more than two years is a great place to find knapweed bio-control insects.  The largest knapweed plants are usually found in vacant lots and parking lots (I don't know why, but I suspect they like the radiant heat coming off the concrete/asphalt at night or the lack of competition from other plants).

Insects, in general, are easiest to find either early in the morning or late at night.  They like to hide during the heat of the day.  Cyphocleonus is most often found in the rosette of the knapweed plant.  Look for rosette leaves that look like they've been eaten and you will probably find Cyphocleonus.  Based on anecdotal evidence, knapweed bio-control insects are not very effective, but out of all of them Cyphocleonus is the only one I've seen cause mortality in knapweed plants.

Additionally, Agapeta moths have already finished pupation and are flying around right now.  I saw one on my kitchen window this morning.  Catch them in a tupperware container and release them on your knapweed or you can have them lay eggs on white paper and place the paper strips near your plants.  Larinus minutus and obtusus  (Knapweed Flower Weevils) can be found on knapweed flowers just about everywhere in the Missoula area.  Collect them in tupperware containers and place them on your flowering knapweed plants.  Make sure when collecting your insects to keep the container out of the sun. I've accidentally cooked my insects on more than one occasion.

Thanks for your detailed and helpful response about all the bio-control species in our area.  I'll walk a little more slowly on weedy bike paths this week, and see if I can find a good spot to get some Cyphocleonus weevils, and even Agapeta moths.

I'm trying to establish some bio-control insects on more remote Knapweed populations in the Garnet Mountains.  I've seen some Larinus weevils up there, but it doesn't look like any other critters have had a chance to spread that far.

In the wildlands, any critter that helps reduce the reproductive potential of knapweed is beneficial in my opinion.  Knapweed is not a problem, per se.  I have seen knapweed populations along trails in Glacier that pose no risk for becoming a noxious weed. Knapweed only becomes a problem when it is able to replace existing plant communities, usually aided by disturbance of some sort.

In our area, Knapweed is particularly invasive where humans have disturbed the area, on roadsides, and on former Plum Creek lands (skid roads, burn piles).  Where there is no human disturbance, knapweed is a natural invader on south-facing slopes, where vegetation is sparse, or where rodents till the soil in the winter.  It is these 'natural' populations that pose the greatest risk to existing natives, but also has the biggest potential for 'naturalization' of knapweed.

By naturalization, I suggest that knapweed will eventually be able to co-occur with native plants, in areas lacking ongoing or historic disturbance.    Naturalization will occur when knapweed have enough natural enemies (released or evolved), so that it isn't able to out compete native plants quite so much.  Part of that is reducing seed loads (directly with moths, flower weevils or rodents, or indirectly by mortality or reduced health).

Anyone have any examples of their knapweed being eaten / attacked by insects or animals that aren't typically considered 'bio-controls'?  I've seen rodents and deer chew unopened flower heads, and seen leaf-hoppers sucking on Knapweed....

I definitely agree with everything you said. Naturalization will eventually come around and bio-controls will help the process along.

Leafhoppers and treehoppers are the most common native insect families I've seen feeding on knapweed in the Montana.  I noticed it a few years back and I did an experiment on them at U of M and they actually grow larger and faster on knapweed than on common crops such as peas and lettuce.  Hemiptera (True Bugs) in general tend to do extremely well on knapweed plants.  I found a large amount of Scutelleridae (Shield-backed bugs), Pentatomidae (Stink Bugs) and Thyreocoridae (Common name?) in knapweed areas as well.  Grasshoppers don't generally eat the leaves of knapweed, but they will strip the epidermis of the stem off in the late summer (this is a behavior I've observed in the laboratory as well).  If you look closely at knapweed stems in late summer you can see the little brown stripes from where they ate the epidermis.

Thank you for taking the initiative and spreading the bio-control insects to remote knapweed areas.  Cyphocleonus weevils especially need help spreading since they don't travel very far.
Bill Schulz
Posts: 10
Location: Central Montana
posted 9 years ago
I would love to know more about  your collective experiences with these biocontrols for knapweed and also leafy spurge. I am over in Great Falls and have the typical weed issues - knapweed where it is dry and spurge anywhere I irrigate. Mine is a smallholding situation so I have dealt with the problem mainly through mowing and hand pulling. I have about 3 dozen mixed fruit trees in a 'food forest' concept, and I have been mowing to keep the allelopathic weeds somewhat under control, but of course that prevents any useful understory to develop with the trees. Not sure what to do, but maybe try the biocontrol approach and see what happens. I am assuming that once the bugs are introduced, their target food source has to be allowed to grow...i.e. no more mowing. Not sure what the risk vs reward might be in this situation. Any words of wisdom? Thanks in advance.
Thomas Bassett
Posts: 3
Location: Missoula, MT
posted 9 years ago
Sorry, for the delay in reply.  I've been told mowing can help in certain situations, but personally, I've only seen it fail miserably.  In Colorado, they did an experiment on Diffuse Knapweed (Centaurea diffusa) and it was able tolerate two mowings and still set a decent amount of seed.  I've seen knapweed tolerate several mowings and still flower.  I have no clue how leafy spurge does after a mowing, but it seems to survive the sheep mowing pretty well. Leafy spurge can have roots up to thirty feet deep so I wouldn't be surprised if it survived lots of mowing (Although, this is all conjecture).

Bio-controls could help, but that doesn't mean they'll get rid of your invasive weeds.  They'll weaken the weeds, but most natives still won't out compete the invasive weeds even with biocontrols.

I would fall back on the permaculture principle "The Problem is the Solution".  Invasive weeds like disturbed, low nutrient soils.  They thrive in bad soil conditions.  So I would suggest that you should feed your soil with organic matter and your natives will be able to compete better in the new nutrient rich soil environment.

Another method would be to plant your own understory plants that are good competitors with invasive weeds that will also help you build soil.  The first idea off the top of my head is to plant some kind of perennial deciduous shrub, bush or bramble that will significantly shade the ground, retain water, and with the falling of the leaves add organic matter to the soil.

For instance, this summer I planted yellow wax beans around the base of my newly planted plum tree to keep the soil shaded, weeds down, add nitrogen (since leguems fix nitrogen in the soil), and add organic matter when it dies in the fall.  So far it's worked, although we'll see if the plum tree survives the winter.
Jocelyn Campbell
steward

posted 1 year ago
I know this thread is quite old, but thought I would reference this thread, understanding knapweed, which has more discussion on mowing techniques that work or don't work.

Plus, just thought I would give a shout out to Weedbusters Biocontrol LLC in Missoula where we purchased knapweed root and flower weevils a few years back. Now, when we pull a knapweed plant, it usually has some root weevil damage already and we do think the bugs have helped reduced our knapweed. 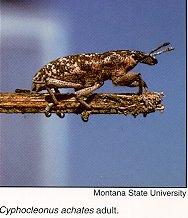 When I was running errands in town, I dropped off the styrofoam cooler they'd sent the bugs in, and as I approached the door, one of the Weedbusters folks was handling and cooing over a root weevil like it was a new kitten or something! Very cool to witness that kind of joy and passion for their bugs.