Turning a single family home into a duplex.

posted 3 years ago
So last year I rented my house out and lived in a small class c rv.  Meh, it sucked.  Four dogs, and 105f days were no fun in the cramped and stuffy space.

So I moved back in to the house in January.  It's just too much space.  Space to heat, space to cool, space I don't use.  I'm not a collector of "stuff", so I only have basics.  A queen size bed (I'd be fine on a double, but a queen is what I have/had to deal with), a laptop, a rocking chair (I haven't had a couch or another chair in the house for several years),  and some essentials for the kitchen.  That's it, errr, that's all I use.  The house does have an armoire with a small flat screen tv that I don't/didn't use, and a bedroom set with dresser.  Okay, I used the dresser because it was available, but I didn't need it.

So, I'm sitting in the house one day thinking how I can make money off of it, and still live in it.  Bam, a new wall and an exterior door is all I need to split it into two separate units.  I end up with two small bedrooms, and the guest bathroom, and the tenant gets the whole rest of the house (kitchen and all appliances, screened room, dining area, great room, master bedroom, master bathroom and laundry room).   I also retain the two car garage (where I easily installed a gas clothes dryer (gas line already there for water heater) and a washing machine.) so I still have tool storage, and a work space.  The yards I zoned off with nice iron gates so the tenant gets the area directly behind the house (very nice with trees and landscaping) and I retain the entire outside perimeter where I already have my existing gardens.  One of the bedrooms I use as a prep area/kitchen to make food (I make all of my meals at home).  The only thing bugging me was running water for the kitchen.  First I thought I could wash dishes in the shower.....lol, yes, I thought that.  Washing them in the tiny sink in the bathroom wasn't cutting it either.  Bam, I had an old stainless sink with faucet on it out in the garage that I picked up for free years ago.  All I did was pull the old faucet off the bathroom sink, and plop that big old stainless unit right on top of it.  No plumbing (other than screwing the water lines onto the sink faucet), the large stainless sink drains right into the small porcelain sink below.

I happen to live in a very desirable area, so rentals are in high demand around here.   An entire house comparable to what I have goes for around $1,200 per month from what I've seen listed.  I figured there's probably a market for singles who want the privacy of a house, but don't really need the extra bedrooms.  I listed it for $900 (and stipulated they pay for my electricity, and gas of which I use very little).  In less than a week, I had a dozen people seriously interested.  The first woman who came to look fell in love, and has now been here a month.  Because of the way the house is situated, I can barely here anything from her side (maybe if a door slams, or thuds of some sort).  She says she can't even tell that I'm here.
So the house is paid for, I'm making $900 per month, and two of my utility bills have been eliminated.    I still have more space than I need, but it's utilized much better, and is probably just about right if I'm honest.

It's probably been done lots of times before, but I'm pretty impressed with how easy it really was to do it.  (The exterior door was the hardest thing to do, but because I put it in place of an existing window that was framed high enough, just simple framing was required to get the door to fit the space.  I have yet to patch the small stucco space left by the window, but it should be relatively simple.  The exterior door cost $120 from home depot, and the sheet rock/studs for building the wall/partition along with s bit of insulation and other misc. materials was less than $100.  For sure less than $350 total when all is said and done.

It's not "legal", I know, but it would be unlikely someone would turn me in.  Even if they did, I could easily say I'm renting a room out rather than a "house". 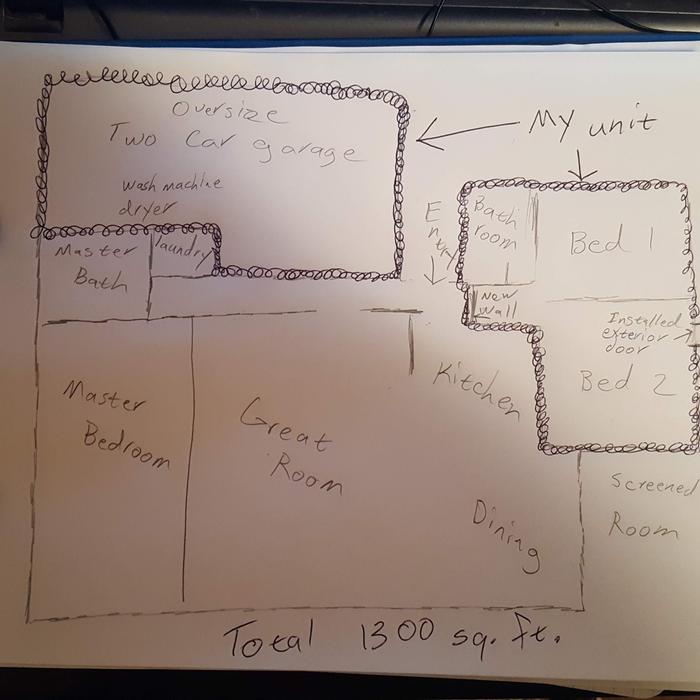 posted 3 years ago
Oh yeah, for cooking I have recently fallen in love with a cheap electric pressure cooker from Wal-Mart.  Unbelievable how fast and efficient it is at cooking.  It even has a searing setting, so browning veggies, frying eggs, etc. is simple.  HARD BOILED EGGS.....oh my gosh, worth it just for that alone.  Never had shells come off so easy before I used one.  I was going to use a coleman camp stove with propane for cooking, but so far the pressure cooker has been doing everything I need.  The only thing I miss is a full size oven.

I also have a mini fridge up on a shelf I built above a tiny chest freezer.

I am a bit worried that for the entire section of the house I have, there is only one 15amp circuit.  So far so good, though.  Nothing has tripped or been an issue yet.

posted 3 years ago
I think this kind of conversion is very doable in houses built with a "mother-in-law " plan.  We've got a nearly identical layout and have converted the garage into more living space.  We continually joke about adding a galley kitchen and second exterior door to that area.  Depending on where we put the dividing wall, we could comfortably house two complete families.  Your story might be just the push we need if there's ever a point where we're not using the complete house. Right now it's a good size for three generations.
Joshua Bertram
Posts: 610
Location: St. George, UT. Zone 8a Dry/arid. 8" of rain in a good year.
177
I like...

posted 3 years ago
Yeah, as long as the layout will work, this is super simple.  Even going the extra mile to plumb in a real working sink/kitchen wouldn't be too bad, especially if you could do it yourself.

You know, I considered a pop up tent trailer and setting it up in the garage, or even a truck topper camper unit placed in the garage, but it'd be almost the same as living in the rv.

I'm really happy with this setup.  Full size shower with tub, hot and cold water, and in the even I exceed power......I'd probably just drill a hole in the ceiling, and run a 50' extension cord over from the 20amp garage circuit.

Good luck on your project!

posted 2 years ago
I'm going to bump my thread because, for one, it's been a fantastic idea that I have zero regrets for doing so far, and two, I'm thinking about downgrading to fOOL time living in a tent in the garage!  I'm just tinkering with the idea at this point, nothing for sure yet.

So, I still have the same woman tenant.  She's been great for the most part.  Total introvert, and the only time she has company over is to have her parents over.  Always pays on time, and I really don't even know that she's here most of the time.  I hope she stays for a long time.
Oh, and I made a deal with her that if she pays in cash, I'd take $100 off the rent each month.  So she pays $800 cash now, not the $900 stated in the first post.  She pays the entire gas and electric bill too.

I'm really thinking I can get $500 per month MORE (that would put it at $1,300 total) if I rent out the two bedrooms/bath where I've been staying for the last year+.  Rooms go for $400 locally, and that's without a private entrance, and would have "shared" areas.  I think there are a lot of private people out there that'd prefer their own private space and not having to share any of it for a little extra.
I still haven't really done the finishing work in here......(I've been busy playing in the garden!) so I still need to button up some stuff, but it wouldn't take much effort to get it ready to rent.  I could even build a little outdoor area for a washer and dryer right where the unused pool heater and pump used to be (power and gas line already installed).  I'd just have to throw up some tin roofing material over it.  Maybe even put a gas oven out there.....  There is a very tiny fenced off yard back there too.  For an extra $100 I might even consider letting them have a small dog...........  I'd have to figure out utilities.  It wouldn't be fair to keep charging my original tenant if I had another renter.....and of course I'd have to make sure that the new renter jived with us.

I was thinking of a pop up trailer, or a truck topper originally in the garage, but I think a tent is a better idea, and would be easier/cheaper to deal with.  It wouldn't be as good as the house for sure, but that $500 more per month sure could justify the slight inconvenience.

So, this 1/3 acre property has the potential to pay me $1,300 per month, I still get to live on it, it produces quite a lot of food (thanks to my new raised beds)(plus 10 chickens), produces its own compost (my in ground swimming pool is filled with wood chips that the chickens manure), and has the potential to have three distinct/separate living areas!