Christina Darling
Posts: 71
Location: East-Central Illinois
posted 9 years ago
We have 20 year-old railroad ties in our garden and I want to get rid of them. At least one of them appears to be oozing a yellow-ish yucky slime. I'm thinking it is creosote.

Should I bury these Hugleculture style? Would they be toxic to the garden? Should I put them in the ravine to rot down?  What to do?

Dale Hodgins
Posts: 9002
Location: Victoria British Columbia-Canada
670
posted 9 years ago
I would never garden edible crops where there are railway ties. Creosote is a known carcinogen and will affect the soil long after the ties are gone. If your local dump doesn't accept this material you can burn it fairly cleanly by building a good hot brush fire surrounded by rocks or firebrick and slowly feeding and the creosote wood onto a well established fire which is burning without smoke. I'm not saying this will be legal but properly incinerated creosote is much less harmful than what you have now. Don't spread the ashes from this fire on your crops.
Eric Thompson
pollinator
Posts: 471
Location: Bothell, WA - USA
50
I like...

posted 9 years ago
Creosote is wrapped up in the black part - giving railroad ties and utility poles the outer black appearance.  I would keep these away from food, but don't go off sending them to a landfill unless you need to.  Any of these I have found around my place become heavy fence posts, and any rot resistant area might be a good application - foundation timbers for a deck?

Oh, and the oozing yellow stuff is almost certainly a fungus working to break down that wood for you.  Do an image search on yellow fungus and see if something matches - I've had some striking patches of Dog Vomit Slime Mold on my wood chip pile this year!
Christina Darling
Posts: 71
Location: East-Central Illinois
posted 9 years ago

Ootama wrote:
I've had some striking patches of Dog Vomit Slime Mold on my wood chip pile this year!

Dog Vomit Slime Mold!  Is that for real? I'll have to look that one up. The ties were old when my husband first got them, had been on a railroad track for who knows how long. They are not in good enough shape to be used for anything. They are rotting and falling apart. But I agree that they are probably not safe to leave in the garden. Maybe I'll just pitch them in the wooded part of our property and let nature (the fungi) and the elements finish them off.

We also have a bunch of bricks and white rock in the garden. Years ago, before I knew him, he had a raised garden with brick pathways that are now overgrown with weeds. My thought is to take up the brick and make a low wall on the north side of the garden, get rid of the ties, and put the white rock on the driveway. THEN I will rebuild the garden using brush and dead limbs from the fruit trees, new soil, manure, and green mulch. There are some flowers around the perimeter but mostly overgrown bushes and such. I will try to save some of the flowers but it needs to either be cut down or severly cut back.

What do you think? Any suggestions anyone?

Christina Darling
Posts: 71
Location: East-Central Illinois
posted 9 years ago
Too funny! This guy has a sense of humor!

posted 9 years ago
If the beds are at least still raised, trimming everything and putting 6 mil black plastic over the area for 6 months (including Winter) will probably be the easiest rehabilitation -- the edges don't really need to be very neat to be very functional, and cardboard + 6 in of wood chips over the pathways in the spring will probably keep them pretty nice!

Christina Darling
Posts: 71
Location: East-Central Illinois
posted 9 years ago
Yes, that would work, but the beds are too small. I want more room to grow more things!  And there are too many brambles in the garden besides! We have blackberries, red, golden, and black raspberries. Plus there are berries on the other side of the house! I want berries out of the garden. They do attract a lot of bees though. You can't see them for the weeds but there is red brick under all the pathways. It's a jungle out there and just more than I can handle. I can't work outside after 8:30 a.m. because it's already too hot for me. I really need a permaculture garden. Wish we had a pond but we do have woods. I want to learn to do a 'forest garden.'
A-Summer-Garden.jpg 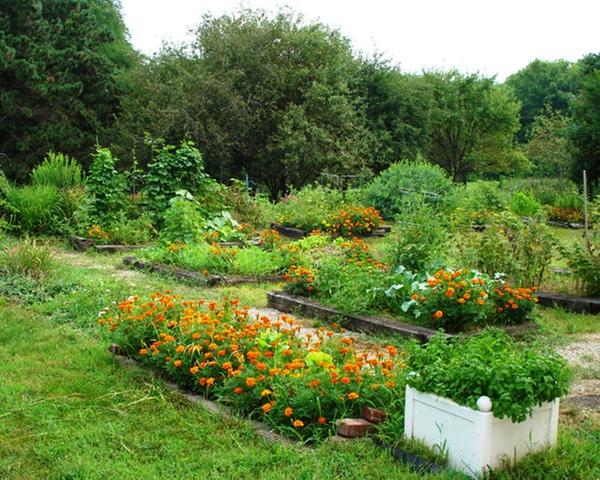 Richard Nurac
Posts: 52
Location: north Georgia
posted 9 years ago
I used to use railroad ties to support the cables for my muscadine vines.  They were ideal, with a cross section  of about 6" by 8" and when buried 2.5 ft in the ground they were immovable and easily carried the weight of 3 cables laden with vines.

However, I became more and more concerned about their impact on nearby plantings and so I hauled them out.  4"x4" cedar posts are not really strong enough.  My solution, where I could, is to re-use 8ft lengths of trunks of maple and cherry trees which had to be cut down.  I am sure, with time, they will rot but I will benefit from the return of nutrients to the soil.  You can see an example of a recent installation (only 1 cable and beginning vines) I did from the attached 'photo - more details at my website www.nutrac.info.
036yz.jpg 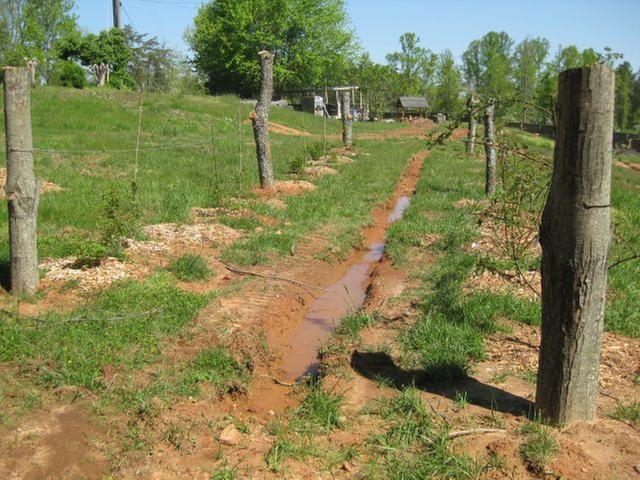 posted 7 years ago
Richard N. : Cedar posts consisting of the whole tree though only 3-5 '' should be cheaper,and last longer than any hardwood with the exception of
Osage Orange (not the Fruit), get out where the Red Necks live and strike up a bargain .

I couldn't tell are you burying deadmen at the ends of your rows to cantilever your load? Big Al

allen lumley wrote:Richard N. : Cedar posts consisting of the whole tree though only 3-5 '' should be cheaper,and last longer than any hardwood with the exception of
Osage Orange (not the Fruit), get out where the Red Necks live and strike up a bargain .

I couldn't tell are you burying deadmen at the ends of your rows to cantilever your load? Big Al

My guess is that those maple posts are now half way to compost. I would add black locust to the list of rot resistant hardwoods. There are many tropical woods that are resistant but also quite valuable. We're not going to see a lot of teak and mahogany fences.