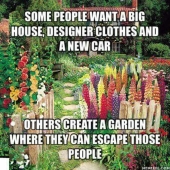 Hilarious, rib tickling memes
Another summer blockbuster!
show more
1 year ago
meaningless drivel
What should I seal my planter boxes with?
A couple of things you need to be aware of. 1) There is a difference between Finishes and Sealers. You can have a planter that is finished beautifully and yet leaks like a sieve. There is not, that I am aware of, any one product that will do for both. 2) Wood, no matter how well sealed, in touch with water will eventually rot. I made some planters out of redwood with roofing tar as a sealer. Ecological disaster that they probably were, even they did not last for ten years before turning to mush. If I were doing this, and wanted to make some attractive planters for sale or gifts, I'd look for someone thermoforming liners out of empty plastic bottles (we have to find something to do with the damned things). Here is a source I picked practically at random. http://www.deepstreamdesign.com/abs-plastic-planter-liners.html

Galicia's clitoris festival - turnip tops for the win!
This is a story from my friend, Mary Pate, who grew up in Savannah in the middle of the last century. Just after the war, when she was in college, she decided to spend a summer in the Appalachian Mountains in Northwest Georgia travelling around talking to the folks who had lived there for generations. She filled notebooks with folk cures (to cure a stomach ache, for example, the sufferer lies on a wooden barrel on it's side. Someone grabs wrists, someone grabs ankles, and they roll the patient back and forth. Presumably until they either get better or die, I don't know), ghost stories, and gardening folklore. In the Spring, the people told Mary, they'd plant by phases of the moon. The round produce - tomatoes, acorn squash, melons - were planted by the women. At the end of each row, the woman would turn around, hike up her skirts, bend over, and moon the whole row. Presumably to give the coming crop inspiration. The longer vegetables - green beans, zucchini squash, cucumbers - were planted by the men.
show more
2 years ago
meaningless drivel
What to use on top of two coats of old chipped house paint? any non toxic choices?
Here are a couple of lead-testing kits. There are links included for purchasing. http://lifehacker.com/how-to-perform-a-diy-test-for-lead-paint-in-your-home-1732514709

recommended tomato varieties
This may be a little off topic, but a fun story nonetheless. Many years ago I lived in a little town in Puerto Rico called Lajas. The sewage treatment facility would treat the "sludge" anaerobically, then aerobically, then dry it. They ended up with a wonderful, odorless, black fertilizer. If you called and asked, they'd deliver a pickup load for free. We used it liberally to revive the moribund Puerto Rican soil in our garden (Puerto Rico monocrops sugar cane so everywhere the soil is depleted). There is only one caveat. It seems that tomato seeds stay viable through digestive tracts and most sewage treatment schemes. So we had volunteer tomatoes coming up all over the garden. We'd pull them where they weren't wanted, but let them grow elsewhere. The trick is to not think too much about where the tomatoes in your salad came from.
show more
3 years ago
cooking
Repurposing inorganic chemical fertiliser
"There are plenty of wild areas that could use a little boost of nutrition that are not immediately used for food: lawns, barrow pits, etc. "

I thought then term "Barrow pit"(sometimes "borrow pit") was strictly a Wyoming term. It must be creeping beyond the borders.
show more
3 years ago
zero waste
Video editing for a complete beginner: how do I do it? Please post your favorite resources.
By the way, I've not played with Lightworks, but a friend of mine knows it well and says that without the Controller it's a little kludgy, but with the Controller (you can find them on ebay) it's very slick and accurate. The contoller is kind of a track ball that can run your footage back and forth to find the best cut point - much easier and quicker than pressing keys on a keyboard.
Tim
show more
4 years ago
residual income streams
Video editing for a complete beginner: how do I do it? Please post your favorite resources.
First, a hard-learned cautionary tale. eight years ago I was living in LA and had a similar revelation - I had been making a living as a carpenter for 30+ years and wanted to hang up my hammer. What I felt drawn to was Video Editing. What a friend suggested was to buy a decent Mac computer, Final Cut Pro, a used video camera, and several instructional books and then go ahead and teach myself. I had taught myself carpentry this way and I decided that instead I wanted to get a full-on Editing education on the best equipment. So I found a trade school that taught the Avid. 3 years later I was a highly-skilled editor with my own Avid Workstation and a  $30,000 debt. And I couldn't find enough work to make the payments, let alone support the family and I had to go back to wood-butchering. I was over-qualified for 95% of the video work out there which is just simple cut-to-cut, lay in a few transitions, titles, maybe a little music and Bob's-your-Uncle.

When you pick your software make sure that there are at least one or two instructional books on Amazon for it. For me, at least, books (with an included DVD of cuts to play with) are much easier to teach yourself editing processes with than YouTube tutorials. You can try each step, go back and try it again until you get it right, then move on. And you don't have to listen to some 13 year-old with a nasal pubescent voice and try to follow his mouse movements as they whip around the page.

Other random points: when you shoot video with your phone, always hold it horizontally (landscape), otherwise you'll never get rid of those black bars on each side of the picture. Find out what format your phone and camera shoot in and make sure your software accepts those. Find out what format your software exports in, if it's not MP4, then get a freeware called MPEG Streamclip (so good I'm still amazed it's free) to transcode to MP4. This is the format that YouTube likes the best. If you're going to sell DVD's, Roxio makes good burning software under $50.

You'll need an editing software that can give you at least 4 video tracks and 6 audio. More than that is superfluous. It should have an integrated title tool with at least a couple of dozen fonts. Beyond simple dissolve, most transitions (wipes, page rolls, blinds etc.) are just annoying and useless. Use Audacity (another free software that way too good to be free but it is) to edit all your sound (music, voiceover, sound effects) then export it as WAV or MP3 which your Editor should happily import and lay into an audio track (or 2 if it's stereo).

Don't be too worried about the learning curve. With some skills, like writing computer code, you have to have some mastery before it gets interesting and fun. Editing has rewards and fun right from the get-go and for every step thereafter.

Making cob 101 (the basics of basics)
Joy,
I lived in Fairfield, Iowa for many years and did a lot of building there. Here is how you find clay. Go out in the backyard with a shovel and dig a hole. The topsoil will be very dark about 6" to 18" thick and easy to dig up. Then you hit a lighter colored, harder to dig layer that can be 50 feet or more deep. Congratulations! You found clay. There is little or no sand in the clay (just as there are no rocks in Iowa, there is no sand that rocks weather down into) so the soil does not percolate worth a damn. And that is why Iowa basement walls are all buckled and reinforced with I-beams. Guys who haul and sell soil in Iowa have two choices - Topsoil and Fill. The Fill is cheap and is mostly, if not all, clay. You will have to buy sand.
- Tim
show more
5 years ago
cob