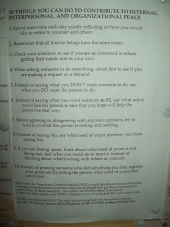 Are there really that many people who when hearing, "Hey, can we try putting the milk in this other spot? It keeps tipping over when we put it here." will get defensive about being blamed? I guess I understand that some people might feel blamed if someone says, "hey, you keep spilling the milk when you open the fridge." A simple tweak in wording like above would be enough for almost everyone, I would think. Maybe I don't get it.

My late mother told me that oftentimes, she had difficulty with a task, finally found a way of doing it that worked for her, only to get unsolicited advice, "It's better to do it this way" -- which was a way she already tried and couldn't do. As I moved into adult life, I found that was often a problem for me, too, although thankfully less so as I get older. So yes, "Can we try putting the milk in this other spot" can feel like an attack if the person had a definite reason for not doing so.
show more
2 days ago
communication

EMF/WIFI sensitivity in an increasingly EMF-filled world
This is a difficult topic for me, because with my background in science, I'm usually good at separating the science from the pseudoscience, but not this time. This case has me stumped.

Initially, conspiracy statements against 5G were similar to that of mobile phone signals, radio signals and other sources of non-ionizing radiation: it causes various cancers, deep state. The usual sorts of things for anything new.

They then go on to list seven different, contradictory conspiracy theories linking 5G to COVID-19.

But on the other hand, with members of this thread describing their own experiences, well, I can't just dismiss that either. I don't live in your body, I can't lecture you about what your body feels. At the end of the day, just because fringe conspiracy theorists seize upon something and distort it, doesn't mean there are not real problems with it also. This branch of science is not my specialty, so I can't really weigh in. I do know, though, that -- as RationalWiki repeatedly points out -- correlation is not causation. Just because two phenomena seem to occur at the same place and time, or one seems to follow the other, does not, in itself, prove that one causes the other. Your feeling the way you do when you go into the town might be because of the non-ionizing radiation; or, it might be because of something else entirely, maybe something you are not yet aware of.
show more
2 days ago
personal challenges 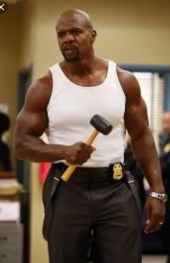 Advice for Holding onto Different Values When it’s Tough?
Fascinating. The OP started out with turning lawns into food, and producing something yourself instead of buying it. Yet so many of the replies focused more on the next paragraph, about clothing. Clothing is literally the most superficial aspect of a person (dictionary definitions of Superficial all make reference to the surface, as clothes are on the surface of the body). I get it -- people so easily judge by that when they don't know the other person -- but I am curious about being judged for having those more fundamental values.

I remember how frustrating it was when my mother bought her couple acres in the woods -- and then the bulldozer knocked half of it down to build the house and a large area of lawn. Not what she wanted, but "that's how it's done." And then the house she had sold --the new buyer, again, knocked down most of the existing trees, to make room to park trucks. I grew to hate that county, because it seemed like the defining ethos was, "If there's a tree, cut it down."
show more
2 days ago
personal challenges 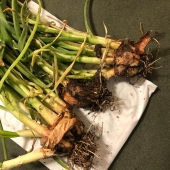 Shallots: bulbs divided/multiplied
Shallots are like garlic in that each clove can be planted separately. This page first explains growing scallions, then goes on to explain growing shallots: Shallots and Scallions

Essentially, it recommends planting 6 inches apart, and that the new bulbs are ready in 90 to 120 days.
show more
3 days ago
gardening for beginners
Avoiding camping fees

Mark Phillips wrote:
Later in life I became a minister and realized how many small poor churches needed repairs they could not afford. Being a contractor and RV Tech by trade I decided (My new wife and I) to go on a sort of mission. We crossed the US from PA to Florida to California and back stopping along the way and offering to help out and all we asked for in exchange was a extension cord and parking space. It was quite gratifying to be able to help so many small churches along our way from building puppet stages for youth ministry to repairing leaky faucets and sinks and we met a huge variety of great people doing it.

I have used a number of these tips myself; I can offer an idea that came to me, inspired by hurricanes. I was in Greenville, North Carolina when Hurricane Matthew hit. The motel where I was staying suddenly filled with evacuees, and the Red Cross van brought meals. Everything seemed normal in that part of the city; but the part close to the river was deserted and everything closed,  I drove out onto the country roads and was surprised to see lines at the gas stations extending onto the roadway. The next year I was in the Dominican Republic when Hurricane Irma was followed a week later by Hurricane Maria. There, too, trucks drove around distributing free meals. It occurred to me: if you have the tools and the skills, "hurricane travel" could be a thing. Go to the aftermath of a major landfall, find where people are making repairs, and lend a hand. When the disaster relief meals arrive, you get included in the head count. It isn't freeloading if you're making yourself useful, right?
show more
2 weeks ago
frugality

Inventions you wish existed or think someone should make - drop your ideas here!
My first trip to the Dominican Republic, an idea suddenly came to me: a solar turbine. PV cells are quite toxic to manufacture, you know? But when I was a kid, my family had a Christmas decoration called angel chimes, powered by three candles. A very clear picture appeared in my mind (we autistic people are said to "think in pictures," whatever that means) of a solar turbine, more eco-friendly to make than PV cells. Unfortunately, I have not yet been able to build a proof-of-concept, because of the lack of equipment and technical skills.

While we're on the subject, I would love to find a way to open Indian almonds without individually splitting each one with my machete.
show more
2 weeks ago
cottage industry 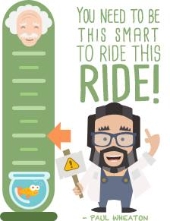 People who have escaped the purgatory of the 9-5, how'd you do it?

Catie George wrote:
I feel like, but have no proof, that avoiding the offputting ad-ness of a lot of other sites has helped grow your following. I probably wouldn't be here regularly if "Buy my ebook!" Was a banner ad I had to turn off every time I open the the site, but dont mind the tiny ads at all. I havent bought anything from you but have bought something from a staff member. But then- i also have never bought off of a "Buy this thing!  Sign up for my newsletter!" Full page banner ad either.

I've wondered about that myself. I open a web page, start reading an article, and no sooner do I finish one paragraph than the screen dims out and a popup appears, blocking the article, and asking, "Would you like to sign up for updates?" And I'm like, "I barely read one paragraph. That's not enough to know whether I'm interested in updates. Plus you just pissed me off by interrupting me." Is there any evidence to suggest that this aggressive strategy actually makes money? I would think just the opposite.
show more
2 weeks ago
residual income streams
What does "Retirement" mean to you?

S Bengi wrote:
With Half a million in the bank and a projected 10% return on investment, one could survive on just the interest. The stock market goes in cycle sometimes losing 50% of the principal other times making 20% on the principal so a whole million is needed to ride out such fluctuation.

For a lot of us, that is pie in the sky. At 47, I am nowhere near on track for that, and it isn't due to lack of foresight. I have a Roth IRA, and TSP; but I have seldom earned enough to max them out while still meeting my current expenses. I've been a renter all my life, so no mortgage, but also no equity. "Invisible" disabilities can sometimes more than offset high education in terms of employability.

That's why I chose the Dominican Republic. I was presented with an opportunity to purchase a 100-year lease on an eighth of an acre, for an amount that I was able to pay off without taking out a long-term loan. I still need to cover the annual fee, but that is a lot more doable than  a year's worth of mortgage payments. An eighth of an acre is small by Permies standards -- I occasionally see blogs and whatnot about self-sufficiency on a quarter acre, but never smaller than that -- but I have to face the reality that that is what I have to work with.

For me, retirement means being able to make that my permanent home (I'm not currently there), with the permaculture features reducing my expenses: solar panels, food forest, gravity-fed water. I am preparing now by expanding my work-from-home skill set, since I am pretty sure that I will need some source of income besides my IRA, TSP, and Social Security. In my youth, I dreamed of being an explorer in the Amazon or Congo; people like Jane Goodall and Henry Bates were my heroes and heroines. What do you do when the future you dreamed of becomes the past that didn't happen? The years of my life that I had envisioned doing that are now mostly gone -- spent in the struggle to get by, with periodic, tantalizing tastes of the dream when I was able to travel. But during my last sojourn at my Dominican "homestead," I was able to encourage myself with a mental exercise: I thought of all the exotic flora and fauna so beautifully illustrated in my childhood books, that I had wanted to see someday, and ticked off which ones I had seen there in the Dominican hills and shores. I concluded that there were enough of them that I could still do meaningful "exploration" close to what I now think of as home. At 47, perhaps I can still say, "When I grow up, I wanna be an explorer!"

John F Dean wrote:I find many things impact my health. Certainly diet is one of those things.

Should have posted this before I just posted my "Omnivore?" thread. This is a prime example of the way different people's bodies are so different. I have never been anywhere near an Atkins diet, and I go years between seasonal colds. On the other hand, although my family mostly live in the Pacific Northwest, I just can't bring myself to go back there -- eight months of the year with nothing on my mind except longing for summer to come back was not good for my mental health.

I think the real observation here is that each of us are affected by different things.
show more
3 weeks ago
medicinal herbs