What to plant over septic field?
We have a similar issue - septic tank is basically Zone 1 for me because we spend so much time out back (not so much out front).  I am going to redo our porch to redo some zoning and make the front/side yard an easier "zone 1"or at least Zone 2 because I need more garden space.

We overseeded clover, triticale and alfalfa over our septic tank and use it in our paddock rotations for chickens =)
show more
2 months ago
grey water
plants that will clean your grease trap
They are working on something like this for the passive wofati greenhouse!
I think their last assessment was a mini-septic tank to avoid the grease clogging the pipes issue :-/
show more
2 months ago
grey water 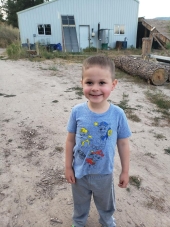 WheatonLab2020 with the kids
I really wanted to upload some more pictures, but I am experiencing technical difficulties just slightly more difficult than this tired, mom-brain can handle.

We only stayed one week.  Had my husband been with us, I believe we could have stayed much longer.  After four days, my four year old was missing his brother and father too much.  When the water pump was shut off and my son had an 'accident' because he couldn't make it from one bathroom to the other to do the doo, it caused him so much embarrassment that he was throwing fits every time we left his 'comfort zone', which was far too small a radius.

TIPS for coming with kids:
*They must be comfortable with peeing (and pooping) out of the house and in odd places.  Using the Willow Bank Toilet wasn't too hard, but peeing when out working was a stretch for my little guy, and not something I have ever considered an issue before.

*Pack bug bite kits EVERYWHERE. I am the only one who got stung, but having the kit handy was amazing.

* Really listen to the podcasts.  Seriously.  Paul is the same person on podcast as he is in person.  Don't expect anyone to be any different around your kids, and you'll be totally happy!  (AKA - people swear; have different spiritual/religious backgrounds, different politics.  None of that mattered to me - we were there to learn.  If it matters to you - don't come, you'll be offended/triggered/insulted, guaranteed.)

* The area is FULL OF DANGERS.  Natural (rocks, wasps, mountains, etc) and man made (sharp/heavy tools, possible Legionella exposure, fire/hot stuff)  Basically, assume the whole place is booby trapped for kids because there is NO WHERE that is "kid proofed"

* Realistic Expectations:  Having kids isn't had.  Having kids while trying to do anything else is difficult.  My 15 year old was able to work half days consistently, but he wasn't acclimated to the heat and still needed "mom" to help him; that meant I was parenting two kids, and couldn't really be a boot.  I really, really wanted to be a boot.  I chose to be mom.

* When well fed and working WITH someone they like, more gets done.  Choose your projects based on your kiddo's interests, and you can do more!

*Extra clothes for littles - they just get SO DIRTY and it's easier when you can just enjoy it.
*Portable toys.  I wish I was better about bringing things the 4 year old would play with - the reality is, he wanted his brothers and no books, Legos, or dinosaurs were enough when he was with only me.

I was overwhelming blessed by the BOOTs and WOOFs who were there.  Several of them helped my kids do BOOT activities and my boys both loved it!  My boys are used to being outside, used to using tools, and used to doing what they are told.  If you are even CONSIDERING coming, your kids had better be much the same - more Boy Scout of the 50's than millennial cub scout.

I will ABSOLUTELY COME BACK in a year or two. . . without the little kids.  They will stay at Grandmas for two weeks while I bring my Eagle Scout and CAP kids to learn alongside me and my husband. If you  have a partner who can also take the time off and travel with you, it may be worth bringing a kid or two.  But don't expect to be able to get much out of it for yourself.  It is hard work, and harder to do while raising a kid.

show more
2 months ago
wheaton laboratories
what to bring when coming to wheaton labs
Yeah, but it happened

Just posting a range "summers are typically in the 90's from 2-5 p.m., with occasional bouts up to 100.  Evening lows range from 45-60.
Winter lows are typically (what, 10 degrees?) and dip as low as (-20?)
show more
3 months ago
wheaton laboratories
what to bring when coming to wheaton labs
Add a temperature range for us out-of-state visitors under the 'clothing' sections.

We weren't fully prepared for 102 degree days!  The weather report we looked at was for 90 degrees, and that 10 degrees is a huge difference!
show more
3 months ago
wheaton laboratories

WheatonLab2020 with the kids
Day 2:
When it is 90 before lunch, the work happens in the morning!  We stayed close to camp today because Benya was not ready to get up!
Benya helped Dez and Jen move rocks, and Eli got to use a fire truck to water the 10 foot tall huegel beds.
After lunch, both boys napped and I harvested alfalfa seeds- apparently they are one of a few soil building plants that survive the rocky, dry climate so these seeds are being scattered everywhere.
Speaking of everywhere- grasshoppers! Apparently they really like rhubarb, and bathroom doors.
show more
3 months ago
wheaton laboratories

WheatonLab2020 with the kids
When Paul invited me to the Wofati groundbreaking as a Kickstarter bonus, I asked "can I come with kids?"  And, of course, the answer was a back-and-forth over two days that resulted in both Paul and my husband answering with a resounding "YES!"

For context: I am a 40-year-old mother of 4, homeschooling and urban homesteading north of Seattle. My oldest, Eli age 15, and my youngest, Benjamin age 4, made the 500 mile trip with me. At home, I feel like a country-girl in the city; arriving here, I feel like a city-girl in a country utopia.

2 hours in to our arrival, the 15 year old introvert has pitched a tent, made friends with 3 cats, and seems to be enjoying the "pee everywhere" instruction once he got over his shyness! The 4 year old has found several hills to run up and down, found a bone he uses as a pick-ax to "slay monsters" and hid from the two couples who helped welcome us and showed us around. He has successfully deposited into the composting toilet, and had an amazing conversation via video phone with Daddy about the "2 toilets IN THE SAME BATHROOM! One for pee, and one for poop!"

More posts as I can, perhaps the teen will let me picture him while working. For now, I am praying the excitement wears off and the 4 year old sleeps soon. . .
show more
3 months ago
wheaton laboratories 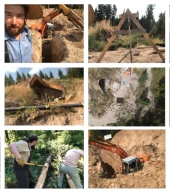 wofati greenhouse design and build - raw zoom vids
Did the 3rd meeting (Monday) get posted somewhere, or is that not part of the package?

Am I understanding correctly that the beds have all been removed and replaced with Tubs, or is that just some of them?  If there is no beds, then we can't plant a tree, right?  The roots just won't be able to go down long enough to be successful.
show more
3 months ago
paul wheaton

choreography
Is Eastern Washington "cold" enough?  We have a variety called Red Haven peaches.  Elberta's also do well (and usually what I can) but this spring frosts hit late and destroyed the Elbertas but not the Red Havens.  I was going to can the last dozen I have from last week's purchase, but maybe I'll just bring them with me. They are starting to wrinkle but still taste good!  I am not sure I will make it to the organic farm I get them from as it is an hour off-road (on 20, not on 90).
show more
3 months ago
wheaton laboratories

choreography
Are there any good (read as: organic and nice people) farm stands along I 90 that we could stop at to grab a box of something to share on our way out?  My favorite is on Hwy 20 and I'm debating adding an hour to my drive just to bring fresh peaches!  Unless you have peaches to share