How to grow more vegetables by John Jeavons 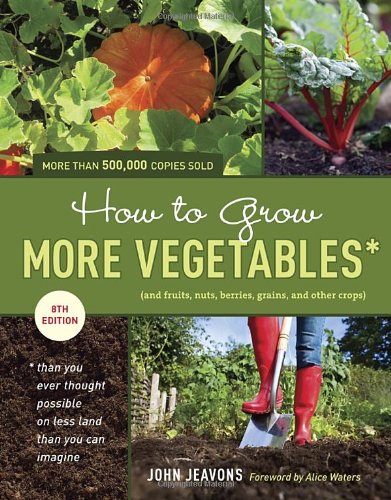 From Amazon: "Decades before the terms “eco-friendly” and “sustainable growing” entered the vernacular, How to Grow More Vegetables demonstrated that small-scale, high-yield, all-organic gardening methods could yield bountiful crops over multiple growing cycles using minimal resources in a suburban environment. The concept that John Jeavons and the team at Ecology Action launched more than 40 years ago has been embraced by the mainstream and continues to gather momentum. Today, How to Grow More Vegetables, now in its fully revised and updated 8th edition, is the go-to reference for food growers at every level: from home gardeners dedicated to nurturing their backyard edibles in maximum harmony with nature’s cycles, to small-scale commercial producers interested in optimizing soil fertility and increasing plant productivity. Whether you hope to harvest your first tomatoes next summer or are planning to grow enough to feed your whole family in years to come, How to Grow More Vegetables is your indispensable sustainable garden guide."

Posts: 582
Location: Lower Mainland British Columbia Canada Zone 8a/ Manchester Jamaica
10
posted 10 years ago
Whoa! what type of hidden gem is this? I can't even find the book you mentioned as I've already opened 5 other tabs of other books on a myriad of subjects that I could never get hard data on. I think one of the things allot of us miss in permaculture is how much good documentation there is out there on things like what to feed muscovies, to how do I transplant my coffee plants for this food forest I've been spouting off at the mouth about. Thanks you so much, this page is like an arsenal of farm income streams and how they've weighed out for real farmers on the ground across the world.
Stewart Lundy
Posts: 77
Location: Eastern Shore of Virginia, USA, Zone 7b, KeB Bojac Sandy Loam
7
posted 10 years ago
While you're at it, you might consider Soil and Health Library's extensive resources: http://soilandhealth.org/

They have all of the back issues of the Biodynamics Journal from 1941-1975 -- and for free: http://soilandhealth.org/01aglibrary/BD.Journal.TOC.html

ben harpo
Posts: 76
Location: Illinois, zone 6b
4
posted 9 years ago
John Jeavons calls his method "biointensive". I'm not sure if he does "biodynamics". As far as i know the two systems don't contradict each other, and one could pick and choose and combine the methods, but they are not the same.

posted 9 years ago
I own John Jeavons book, and I use his master charts for all of my garden calculating and layout. He makes it really easy to organize your garden as if you have been perfecting it for decades like he has.
The intensely close spacing is allowing me to have a 10 share CSA on only 800 sq feet, the other 5200 sq feet I have is growing 75% of me and my girlfriends food. It requires no machinery, and it is pretty much a no till garden.

But as with all things permaculture, you can adapt what parts you want to your particular methods, and mix and match ideas from his book and many others. I do not follow his book exactly to a T but I do use many of his methods. With Biointensive you can grow 2500+ carrots per 100sq ft. That is 315 carrots for every 2.5'x5'. By breaking up soil 24" down you unlock a lot of nutrients, and a lot of growing area. The major benefit to his preperation is adding oxygen at 24" down, essentially just boosting the micro life, and in turn they seduce your plants roots to get down deep where a lot more elements are hiding.

posted 9 years ago
As far as it being similar to biodynamics: John jeavons leaves out all the spiritual stuff, only uses science and sound theory. He uses Alan Chadwicks work on moon phases and planting, which is not nearly as mystical as many biodynamic calendars. He does not speak of any horns and burying any animal or animal waste, which as much as I wish I had plenty of fresh cow horns to try it myself I will just have to live within my means until they fall into my lap.

He pushes companion planting, but also states its much easier for the new farmer to follow heavy feeders (i.e corn) with heavy givers (i.e beans) instead of planting everything together at the same time, this also makes harvest much easier, and paying someone to go pick beans and lettuce is much easier when they arent picking through a polyculture of many species (not trying to say polycultures are not very important and dont still have their place in my garden).

He has simplified the human diet to only need 4000sq ft of soil to grow enough food to feed 1 person for an enire year. 60% compost crops, 30% calorie crops, and 10% vegetable crops. I am only growing about 40% compost crops and most of that is fava beans so they are a dual purpous compost crop. I bring in lots of material from all over the area for compost so I can get elements I dont already naturally have in my soil. That allows me to feed almost 2 people off 5200sq ft

Carlos Martin
Posts: 4
posted 9 years ago
Jeavons adapted his methods from what he learned of the Biodynamic French Intensive Method of Alan Chadwick. Although Chadwick had some exposure to Rudolf Steiner in his youth, his methods do not employ the preparations advocated by Steiner. Some commentators have wanted to argue about whether Chadwick was "really biodynamic," but this is a largely misdirected enterprise. An interesting perspective on this issue by Andrew Lorand, PhD, can be found here:

He argues that the two approaches are mutually complementary.

See also Alan Chadwick for recorded lectures by Chadwick where he discusses his method.