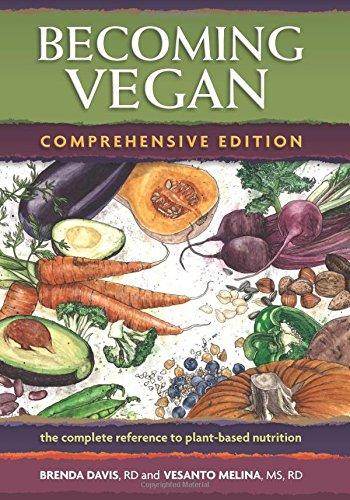 Becoming Vegan: Comprehensive Edition is considered the authoritative reference on how to adopt a plant-based diet. Internationally acclaimed vegan dietitians Brenda Davis and Vesanto Melina specifically designed this fully referenced, comprehensive edition to meet the needs of health professionals, academic librarians, and curriculum developers as well as lay readers with a deep interest in nutrition. Fully revised and updated, this new edition of a seminal classic offers recommendations from top nutrition researchers on areas of particular concern to vegans. Becoming Vegan: Comprehensive Edition will set the standard for discussion on vegan nutrition for many years to come.

Vegan Forest Garden Diet
If a vegan friend visited you today, what could you make for them?
Raw Food, Veganism and Calorie restriction
The Vegan Forum

posted 7 years ago
I'm hoping someone can give me a definitive answer (preferably with reference(s)) to this B12 question, so that I can lay it to rest once and for all:

Are lacto-fermented vegetables really and truly an acceptable source of B12 for vegans in the absence of supplements?

I have heard many vegans say confidently that they are, but I have heard other vegans say that a B12 supplement is necessary, and I have heard many in the Paleo/ancestral nutrition crowd assert that there are no acceptable vegan sources of B12 except supplements, and that algae and other alleged plant based sources are not actual B12, or that those forms are not absorbed by the body...but I don't think I've ever seen any Paleos address the fermented veggie question regarding B12 (although they tend to support fermented veg for the probiotic aspects). What's more, I have seen MDs, nutritionists, and academic researchers of various stripes assert all of the above positions at various times, so I am really looking for an unimpeachable reference if it's available.

Can someone please clear this up? I would greatly appreciate it.

posted 7 years ago
I'm working on a review of this book, but in short the authors have come down very, very heavily on the side of advising that you cannot rely on any such sources of B12 and that supplements are necessary. Very necessary.

I'll try and get that review done as soon as possible, but in short this book appears to be *the* definitive guide to current knowledge on vegan diets and it's has a huge number of references listed. When it says 'take B12 supplements', I'm inclined to believe it.

Here's a link to a page with info which basically summarises the info on B12 in the book - Interview with Brenda Davis, RD: Vitamin B12 Foods, B12 Deficiency Symptoms

posted 7 years ago
Thank you Burra! I really appreciate the quick reply, and look forward to your review. I added the book to my PaperbackSwap list, so maybe I can get my hands on the bibliography!

posted 7 years ago
thanks Mother tree!!!

Veganism, like permaculture, is based on ethics. Which is probably why there is a natural overlap of the two as people extend their ethical behaviours into other areas of their lives.

For anyone who produces most of their own food, I think it's important to understand as much as possible about nutrition so that they can ensure their diets supply everything their bodies need. For anyone thinking of giving up animal products it's even more important to know the strengths and weaknesses of a plant-based diet and how to put together a diet that will provide all the nutrients required for maximum health. And this book is currently *the* best book to fill that need.

The book itself is a 600 page tome, including 80 pages of references.

Amazon.com says that this book is

...considered the authoritative reference on how to adopt a plant-based diet. Internationally acclaimed vegan dietitians Brenda Davis and Vesanto Melina specifically designed this fully referenced, comprehensive edition to meet the needs of health professionals, academic librarians, and curriculum developers as well as lay readers with a deep interest in nutrition.

For the most part it was highly readable, but there were one or two places where I felt like I'd picked up a university text-book and I had to struggle occasionally to keep focused on the big picture rather than get too bogged down in details.

The authors' aim seems to be to enable vegans to construct a diet that will enable them to be as healthy as possible so they can act as ambassadors to the cause. I think they tried very hard to be unbiased and non-preachy, but to be honest it really is written with the mindset of 'veganism is obviously better, and here's the evidence to support that belief'. And I think that belief may have coloured some of the writing despite their best intentions.

I'm quite happy to read a book, screen out what I think is biased, and accept the rest on merit, but I think some people may be put off by the bias. My son, for instance, picked up my copy, flicked to the start of chapter two, read a couple of paragraphs and recoiled in confusion and distaste at the thinly-veiled pseudo-religious 'feel' he was picking up from it. But I think that if you are prepared for a certain amount of that and concentrate on the nitty-gritty rather than the fluffy bits, you'll get a lot of very, very good information, all fully referenced, and all together in one up-to-date tome. It's a bit of a case of 'take what you need and let the rest go by'.

One subject which always seems to crop up in relation to vegan diets is vitamin B12, which appears to be the only essential nutrient that cannot be reliably supplied by a plant-based diet. There are eight pages devoted to the subject in the chapter on vitamins, with over 50 citations. In short, the authors have come down very, very heavily on the side of advising that you cannot rely on any plant-based sources of B12 and that supplements are necessary. Very necessary. This has some quite profound implications for permaculturists who wish to produce all their own food and follow a vegan diet. It seems that they must choose between suboptimal (or worse) health, buying in supplements or fortified foods, or deigning to eat occasional animal products. B12 is not produced directly by animals, it is produced by bacteria, but although it is possible that some B12 might be found in fermented foods that have been prepared in unhygienic conditions, there appears to be no reliable way to produce B12 on a domestic scale. I would urge anyone reading this to give considerable thought to the matter and choose the most appropriate solution to their needs.

Here's a link to a page with info which basically summarises the info on B12 in the book - Interview with Brenda Davis, RD: Vitamin B12 Foods, B12 Deficiency Symptoms

I would have liked to have seen a similar discussion on glucosamine, which I believe *can* come from vegan sources. Again, vegan supplements are available, but I would really like to know whether or not I could replace the supplements with something plant-based that I could produce at home. Is bone-broth really the only home-grown solution for aging joints?

Just occasionally I was confused by some of the conclusions drawn. For instance, on the section discussing low-carbohydrate diets I read this...

I was delighted to read this as I follow a low-carbohydrate, plant-rich diet myself and wanted to know more, especially what the study's definition of 'plant rich' was, but the conclusion the book drew from this was...

There's no question that low-carbohydrate, high-protein diets are effective for weight loss in the short term; however, this benefit becomes irrelevant when weighed against their long-term impact on all-cause mortality.

I was somewhat baffled by that conclusion as the one I would have drawn from that data would have been more along the lines of 'low carb is good, but not when you stuff yourself with meat and fail to eat a substantial amount of plant material'. On the other hand, the information I needed to form that conclusion was there, so I guess it's up to the reader to take the information and form their own conclusions.

There was also the usual confusion between benign dietary ketosis and ketoacidosis, which was a little disappointing. Maybe in the next edition the authors will address these issues.

I feel as though I've come down rather hard on this book, which is absolutely not my intention. In fact, I was seriously impressed by the scope and depth of the information. Apart from the chapters on general nutrition with their emphasis on the nutrients to take extra care to provide, I particularly enjoyed the ones which spoke about weight control, eating disorders, types of vegans and vegan diets, and diet at various stages of life, such as pregnancy, childhood and old age, which were all excellent and thought provoking. The whole thing was rounded off with a chapter about putting it all together on a 'vegan plate'.

Despite my criticisms, I would strongly recommend this book to anyone considering becoming vegan as I believe the information in it is of vital importance to health.

The authors have also written a shorter, gentler Express Edition as well as books on Becoming Vegetarian and Becoming Raw.

I've ordered Becoming Raw as I'm interested in the lower-carb, higher fat, more Mediterranean-style diet that it encompasses which I will review in due course.

John Master
Posts: 519
Location: Wisconsin
10
posted 7 years ago
I was making some changes to the way I ate and watched forks over knives, was a vegetarian for two days. The longest two days of my life. The most powerful and in depth book i've ever read on nutrition is "nutrition and physical degeneration" by Weston Price. After making some large changes to the way we cook and eat I can say I have a 5 yr old who only took antibiotics once (before we knew better), a three yr old who has never and a 5 mo old who hasn't had anything besides mothers milk and cod liver oil. I haven't had a filling in 3 yr nor filled a prescription for anything in that time. My mouth is full of old dental work, my diet was terrible looking back now. One take away from the book is that humans are only as healthy as the soil their food is grown in and that applies to animals as well and the animals and animal products that we eat. For anyone considering veganism that wants a good challenge as to "why not", this is worthwhile reading.

You should never forget that every creature has its purpose in the cycle of nature and can also be very important to humans. Sepp Holzer's Permaculture