What are these orange spots on my Egyptian Walking onions?

posted 2 years ago
This is the second spring that I'm growing the egyptian walking onion in this bed. They've been growing vigorously throughout the winter and spring, but I've been seeing these weird raised orange spots on the leaves of the onions at one end of the onion patch in the past month or so. The plants at the other end of the patch, about 5 feet away, don't seems to be affected yet.

I'm thinking maybe it's some kind of insect or fungal infection or something. This end of the onion patch is pretty dense, and there's some chard and celery right next to it, and with the Portland winter/spring, these plants have pretty much been damp since October. So maybe the moisture and crowded planting (and snails that seem to love to hang out on the chard and then come over and eat the ends of the onions) are contributing to whatever this is.

I'm trying to attach some photos of it, but haven't done that on this forum before, so it might take me a few edits to get them right.

Any ideas of what this could be? Didn't look like any of the thing I found when searching for common onion pests and diseases.
onion2.jpg 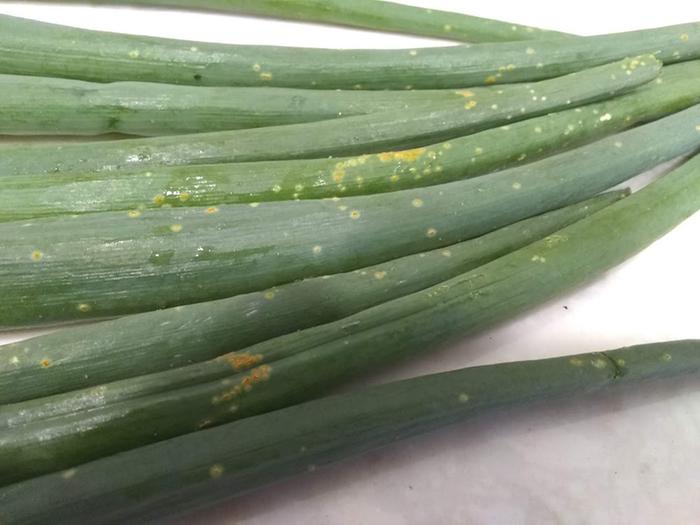 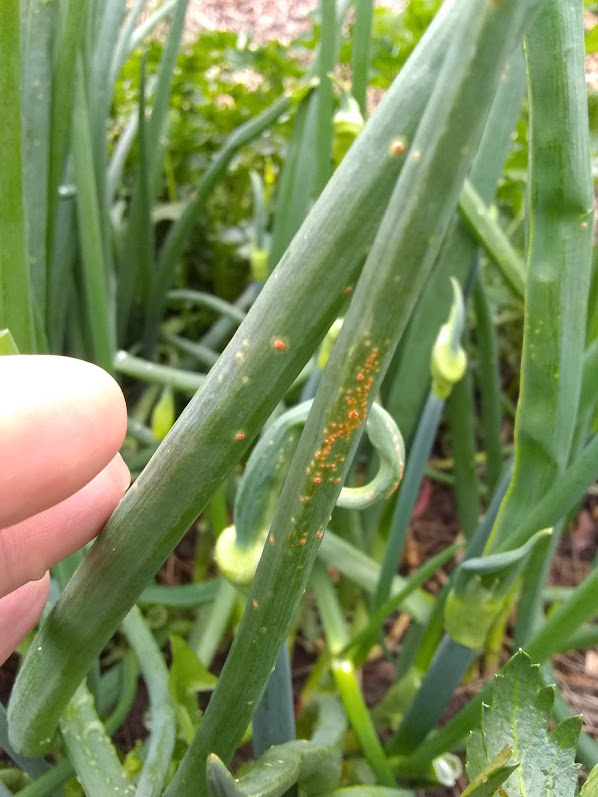 posted 2 years ago
Rust it's a fungus

Here are some suggestions on how to control it.
https://www.rhs.org.uk/advice/profile?PID=214

What soil are you on? If you are on heavy clay like me adding some more sand can be good for drainage helping to prevent fungal attack like this.
Timothy Holdaway
Posts: 17
Location: Portland OR, 8b
21
I like...

posted 2 years ago
Thanks for the info about the rust, Henry. Not sure why I overlooked / wasn't able to find that when I was googling around about onion diseases.

Infection is worse on nitrogen-rich soils with low potassium, so take care with fertiliser applications
This particular end of the egyptian walking onion patch was one of my preferred spots to pee in my yard. Going forward, I'll try to distribute the fertilizer goodness around a bit better

Do not crowd plants, as this raises humidity and increases the likelihood of infection
I had planted the egyptian walking onions the summer before last, and had let the bulbs divide since then without digging and harvesting any bulbs. This resulted in the patch being way too dense. There were a bunch of dandelions and docks and celeries and stuff growing pretty much on top of the walking onions, too. This crowding has pretty much kept this end of the onion patch from ever drying out, even when we've had the rare pacific northwest dry week during the winter.

As far as the soil that I have, I haven't really done my homework on that (haven't even done the most basic test where you shake up the soil in a jar and look at the layers), but it seems pretty clay-ey. I should do some work to get a better idea of what I'm actually working with.

For the immediate term, I've tried to cut out all infected foliage to try to reduce the spore production, and will continue to monitor and chop as necessary. I've thinned out the onion plants and their neighbors to increase airflow and decrease moisture. And we're coming up on a warm, dry week in the weather forecast, so hopefully that will dry things out and halt the fungus. I'm hoping I can keep the plants in this location for the rest of this season, and then take their top-sets and plant my egyptian onions in a different location if necessary, taking measures to keep them drier and less crowded to keep them from being susceptible to this disease.
Phil Stevens
pollinator
Posts: 859
Location: Ashhurst New Zealand
245
I like...

posted 2 years ago
First of all, my condolences. That's rust all right. Once it's in your region, you will probably always have it around. The spores blow for long distances, so even if you cleared your property (and that of all your close neighbours) it would come back. We were in a rust-free area for the first ten years we lived here. Then one spring, after a warm and wet few weeks, all the garlic was infested with it. The bulbs ended being half their normal size and we didn't sell any at markets after a couple years of some nice sales. I resolved to plant most of the crop in a different part of the property, among some young nut trees, in a well-ventilated paddock and at the "high point" of what's a pretty flat bit of land.

The next spring was totally different, starting a bit late and then getting dry during what's normally a reliably wet time of year. I thought that this plus the planting locations would keep us safe from an outbreak. Wrong. The orange spots showed up right at the peak of the freakishly hot and dry period right before summer solstice. The harvest wasn't as badly affected, but still nothing like the pre-rust years.

This season's performance was similar to last year's. I moved the plots again, planting mostly in some new raised beds with fresh soil plus compost and inoculated biochar. Spring weather was a bit more "normal" (like there even is such a thing anymore), but the rust showed up on schedule in late November. This time I got a little more aggressive with the countermeasures: mostly spraying the leaves with potassium bicarbonate and manure/compost teas. We got an OK harvest, but still nothing like what we used to take for granted. Elephant garlic, which is really a leek, is unaffected. The stiffneck varieties don't seem to get it as badly on the tops, but the bulbs are still considerably reduced in size. Softneck seems to get it the worst here, but I will select and plant out the largest bulbs in hopes that there is some resistance or tolerance going on in what are effectively clonal varieties.

I learned a lot about the lifecycle of rusts thanks to this experience and the myrtle rust which began spreading in NZ a few years ago. Long story short: don't expend all sorts of effort on quarantine, because it's airborne. Keep your soil healthy, experiment with earlier or later plantings, and try foliar sprays to knock it back.

posted 2 years ago
Following this thread- I have a lot of alliums in my garden but only the garlic chives (nira) get rust. I cut them down a few times but the rust always came back. this year I started new seeds and planted in a place with better drainage but I know it`s probably just a matter of time.
Bryant RedHawk
gardener

posted 2 years ago
The best way to get rid of rust is to use aerated compost teas to spray the soil, fight the microbes with a healthy microbiome.