Can someone help me make sense of electric fence circuits?

posted 1 year ago
So we're fighting with electric fencing.  We have a 6 joule charger running many miles of wire over many acres.

What I'm trying to learn is how disconnects might interrupt the current flow.  The problem is we have many gates, as well as buildings interworked into the fenceline, and anywhere there is a dead-end we have to splice the wires.

What I am currently doing is at a gate/dead end, all lower lines attach to the top hot wire (which runs uninterrupted 7-8' high), which then carries over the fence, drops back down on the other side, and all of the lines connect again to that main top wire.
We have a "top hot" ling running 8' tall all over the property to deliver electricity to all of the pastures.  We came up with this idea because getting 3-7' of snow pack in the winter requires us to disconnect our lower lines as they get buried.  So anywhere the lines dead-end and connect to that top hot wire we have created insulated hooks that can simply be unhooked and disconnected in the snow.  This method would also allow us to isolate a pasture with each pasture transition (turn a whole circuit on or off for maintenance, etc).  We have 5-6 hot strands running up to 8' tall so that we still have a hot fence line in winter to deter big cats and canines, as well as in spring melt and pack when the livestock can walk on top of the snow.  We have ground wires running in alternate with the hots so that anything that touches both at once gets fried (goats are especially poorly grounded out here, but it also helps with animals that think they can just swoop under the fence- BAM they hit ground and hot in the process and get popped.  We also have some areas that only have 2 lower hot lines fortifying solid wire fence, where multi-strand isn't really needed except to keep livestock from taxing the wire fence.  These 2 lower lines tie in into the lowest two hot circuits.

I attached a diagram that hopefully makes sense and helps to illustrate what I'm talking about.

We have extensive grounding at the charger (copper rods sunk into a water drainage area) as well as several acres away in another low wet area.

The problem is that:
- the fence very rarely pops at 100% according to the charger reading.  If I isolate just the top wire it's 100% of course.
- the fence seems to pop erratically. Sometimes, for example, a pig will press into the wire and not notice and it may take 10 second for the fence to pop.  Other times it pops instantaneously when they get to close.  The charger is set to fast, so it's pulsing every 2 seconds.
- some areas of the fence seem extremely hot, while others don't seem to be working, even on the same unbroken line.  The goats have learned that one stretch of fence in particular is very weak and they are now running free and naughty around the mountainside.
- there is no point of grounding that we can find, and we've been over it many times.  It does endure a LOT of grounding out, too.  Twigs and sticks don't really bother it.  Short of being in direct contact with a ground wire, it's always hot.

And I'm curious if:
- it's better to tie dead-end hot lines into the main top hot
- or better to just end their circuit at that point and NOT tie them back into the top hot wire

I'm assuming how I have things spliced is messing with the current.  But It's REALLY hard to find literature on electric fences that aren't a straight-forward single square pasture. 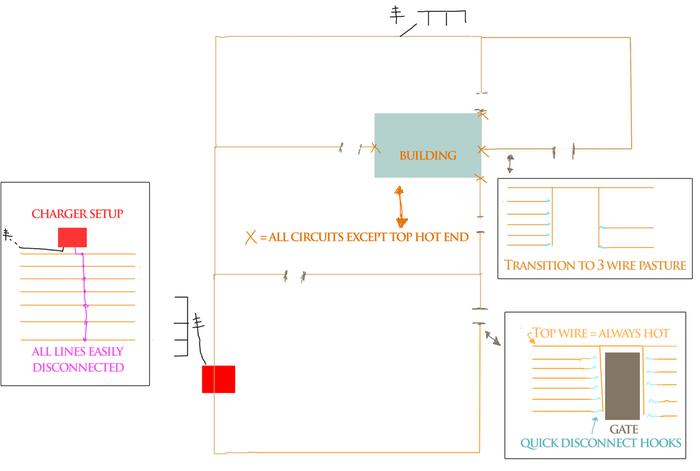 Scott Harper
Posts: 5
posted 1 year ago
"some areas of the fence seem extremely hot, while others don't seem to be working, even on the same unbroken line".  So current in a section of fence is not working but is on opposite ends of that section?  I don't know what you are using for insulators but I have had on rare occasions instances where the wire actually wore through the insulator and was in contact with the nail that was holding it in place.  It was grounding out on the nail but on visual inspection looked perfectly fine.  Could this be your problem?
James Freyr
steward

posted 1 year ago
The symptom you describe of having a hot pulse then weak pulses and again at some point later a hot pulse is the exact description of what I had going on with my fence a few years ago. The pulse energy on my fence tester went in a repeating cycle; a good hot 10kv pulse, then a couple weak ones, then nothing, then a good hot 10kv again, and repeat. I even had a buddy, who farms, has electric fences, and happens to be an electrical engineer come over. We tested the battery, energizer, ground, all good. It turned out, on my fence, the bottom poly wire had slipped off the fiberglass post and was barely touching the metal spike in the soil. I shimmied it off the metal post spike and back onto the fiberglass post, and problem solved.

If I read everything correctly, it sounds like your grounding, 8' high main hot wire and energizer are all working properly, and problems only occur when lower strands are connected. I suspect either something is unknowingly being grounded somewhere, or, one of the switches or disconnects is functioning poorly and not allowing the hot pulse to get through to the other side of the switch. The other thing that comes to my mind is 6 joules is not enough. It may be plenty for the main hot wire, and is why when it's tested it shows a good zap, but adding more and more conductor weakens the pulse.

posted 11 months ago
Thanks for the replies!

We’ve got it popping full blast now. I’m not really certain what the problem was.   I fixed a few grounded spots, although you can pretty much leave this thing laying on the ground and it’ll snap like a .22 but still be popping hot.  As long as it’s not touching a grounded line. We even found a spot where a maple branch had fallen on the upper wire, but our issue was with the lower wires. At one point the charger would just error out if I connected it to the lowest line at the charger. Even though it was tied into the circuit and hot elsewhere on the property.

So. One thing I changed that I think helped was to reduce areas where I had to hook lower lines back into the top hot line. So, I had some “dead end” areas where I hooked the lower hot lines back onto the top hot with quick disconnect hooks.  I was thinking this might help the current/circuit. But It seems that allowing the current to dead-end on the lines rather than loop back in has alleviated the fluctuating power.