posted 1 year ago
Something is amiss with my Blue Vervain plants this year. The new growth at the tops is all twisted and the leaves are all curled up. They are still flowering normally somehow. The mother plant was given to me last year and did not have this issue while growing in a pot. This spring, I planted her in our yard and planted some of her seeds here too. No amendment of the soil, just a bit of mulch. All of them are affected to varying degrees.
Could this be a response to heat and not much water? It was a very wet, cool spring, followed by very hot and dry summer. No other species of plants in the garden is having this issue. I asked the herbalist who gave me the plant if he had seen this, but he has not.
I’m a little concerned that somehow aminopyralids were in the potting soil I used for the mama plant last year. Seems unlikely though since her babies have it too. Any ideas for the cause and things that could help would be much appreciated! These plants are very special to me.
9049B9BB-3FFE-438F-AA06-0F5B070E8CCF.jpeg 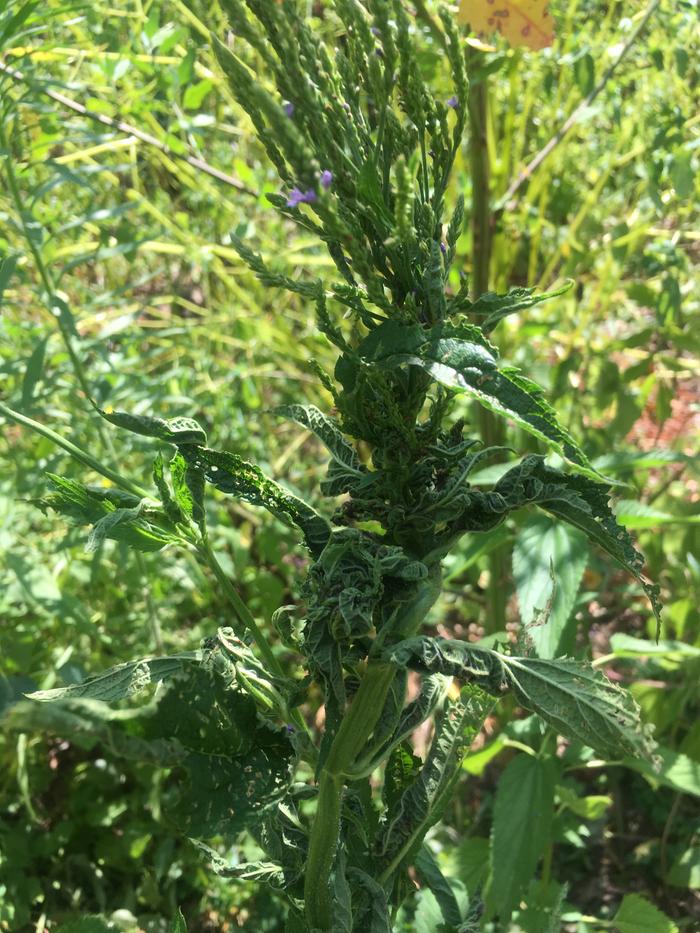 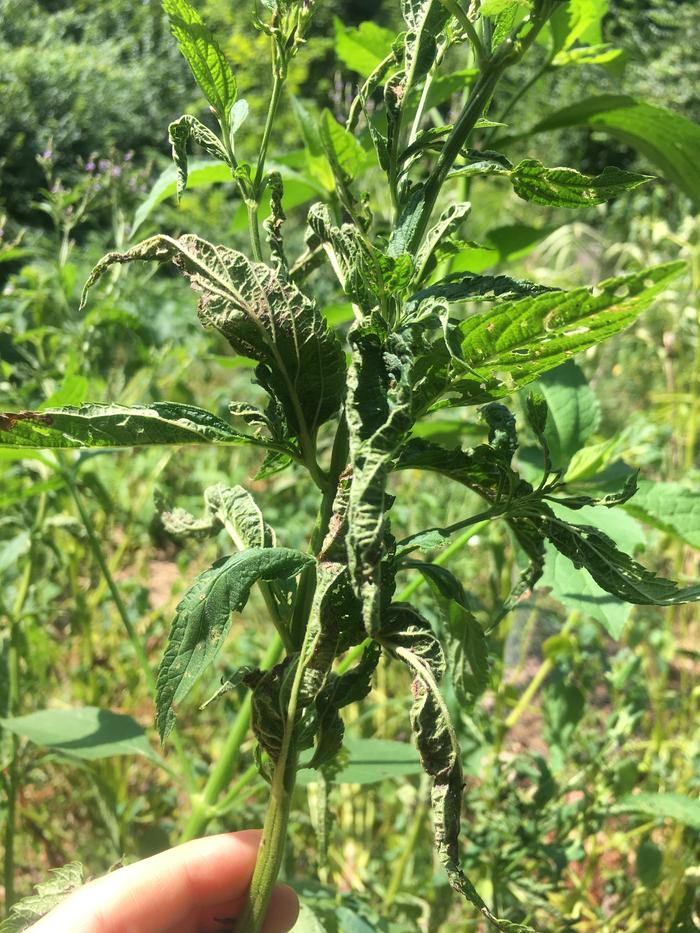 posted 1 year ago
Hi Heather, that really looks to me like exposure to an herbicide of some sort. It's impossible to tell by looking at it, if indeed herbicide is the cause of the symptoms, if the herbicide is in the soil or if the exposure came by drift in the wind from someone spraying somewhere nearby.

posted 1 year ago
Thank you James and Judith for the help in trying to solve this mystery!


Hi Heather, that really looks to me like exposure to an herbicide of some sort. It's impossible to tell by looking at it, if indeed herbicide is the cause of the symptoms, if the herbicide is in the soil or if the exposure came by drift in the wind from someone spraying somewhere nearby.

I agree, from what I have been able to find, it really does look like that. I imagine if that's the case, it would have been introduced in the bought soil. Our garden has roughly a 20 foot wide buffer of dense shrubs and weeds on all sides, none of which are affected, so drift from someone else spraying seems highly improbable. I imagine that would mean the potting soil I used last year was the culprit. But that seems less likely since I don't recall it doing this last year. Also, the fact that the offspring of the original plant are all affected makes me wonder if that is the problem. The seeds were all planted directly into the soil here, no potting soil or other amendments and all in different spots. Everything else around them is happy as can be. Given that nothing else is having this problem, it seems like the original soil here is not contaminated. Surely an herbicide could not be so persistent as to cause effects in the seeds and subsequent generation of a plant? I sure hope not...


Check for aphids just in case...I've had them deform leaves on some types of plants.

I checked and found only one, though I imagine they could have left already. Would they cause the stems to twist too? I did notice a fair number of tiny holes in some leaves. They are also very brown and crumble apart near the edges especially.

I'm very perplexed by this and really want to help the plants heal. My plan right now is to mulch them well to see if water and heat stress are part of the problem. Perhaps if I find the time, I will do a bioassay of the potting soil by planting some seeds in there and see if they have this issue too. I have heard that method works for aminopyralids, not sure about other herbicides.

What other possible causes could there be? I did notice that a wild White Vervain in the garden has a very, very small degree of the leaf curl, but nothing like this. Maybe this genus of plants just responds this way to drought? I don't seem to recall seeing this earlier in the season when rain was abundant and temperatures more moderate. Or perhaps there is an insect, fungi or bacteria that specifically goes after Vervain? Maybe this is the confluence of multiple problems?

Are there other steps I could take to help these plants recover? They have so helped me in my healing and I would like to return the favor. I had hoped to eventually harvest some to make tincture, but right now I don't feel that would be respectful to them. And possibly unsafe for me, if an herbicide is the cause.

posted 1 year ago
Sometimes plants can respond to over fertilizing with symptoms that look like herbicide. Something I discovered years ago is an accidental excessive application of mychorrizae can cause similar twisted gnarly growth like that. Have you used either recently?

posted 1 year ago
Interesting discovery, James. I haven't added any mycorrhizae to these plants intentionally. There is a lot of rotting wood about. And there are some patches where we added wood chips inoculated with King Stropharia in the vicinity, but not near all of them, yet all are affected. The only fertilizer I have added is blood from my moon cycle, diluted, about a month ago. I have given that to these and other plants many times before and never seen this. Usually it does wonders for them.