Maddie Bern
Posts: 28
Location: Sierra Nevada foothills, zone 7
posted 10 years ago
I set up my raised veggie beds this last spring, and am having strange fungal growths in the beds. The growths appear in all 3 raised beds. The bed layers in the upper two beds consist of dirt from the swale, then amendments, then cardboard, then llama manure, then 6'' or more of new straw, then composted straw or composted leaves, then fine compost (purchased). The third bed is slightly different, mostly because it has wood chips instead of new straw.

When I planted the veggies, I made a coffee-can sized hole in the bed down to the cardboard, made a smallhole in the cardboard, filled the hole with the sifted compost, and put in the transplant. Then I set up drip irrigation and mulched with straw.

The first few weeks after I planted the beds, they were very moist, but since then it has, at times, been hard to keep the plants watered enough. I had to keep increasing the length of time the drip system was on. Now the plants aren't severely wilting in the afternoon, the corn isn't bending over halfway up the stalk, and the squash blossoms aren't all dying on a hot afternoon. Many of the fungal growths (if that is what they are) appeared when the beds were quite wet. But some appeared when it was on the dry side, though maybe it was locally wet. They are definitely clustered around the drippers.

Does anyone know what these growths are, and whether I should worry about them? I am guessing that the main cause is that some areas are getting more water than others (I used some new drippers and some old ones which maybe were semi-clogged), and that water retention in my beds varies greatly (straw areas near the plants vs. sifted compost immediately around each plant). Maybe the fungi are from the compost I bought. Though it seems like fungal spores would be pretty ubiquitous. In case you are wondering, no, I haven't seen any mushrooms, nor have I looked at the soil underneath for mycelia (too dark out now to look!).

Also, a friend tells me I should be adding more manure to the beds this fall. Is this necessary? The soil under the cardboard is pretty good. It was a garden for about 6 years and we added manure (in varying amounts) every year. 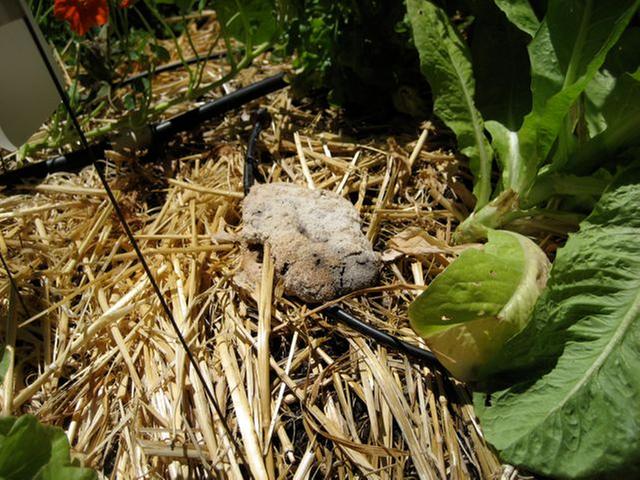 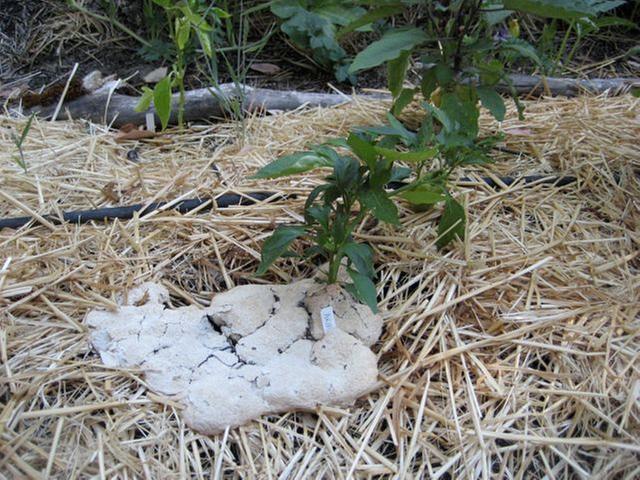 Maddie Bern
Posts: 28
Location: Sierra Nevada foothills, zone 7
posted 10 years ago
Here's one more picture of the garden in question. You can see the initial pictures at the following link, but you need to scroll way down the page. The pix start with the girl mowing the cover crop. 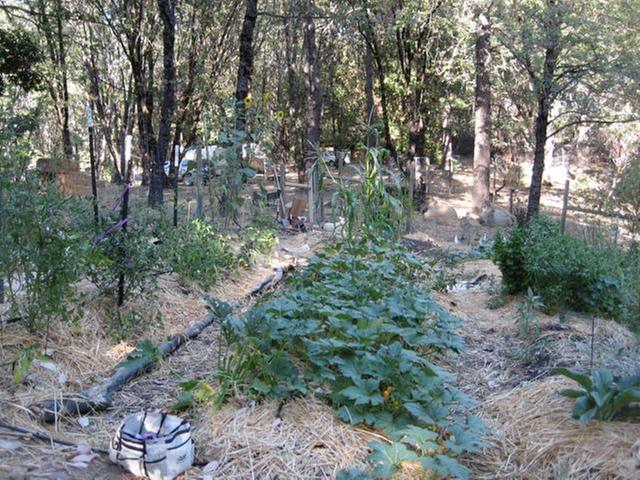 Jordan Lowery
pollinator
Posts: 1528
Location: zone 7
18
posted 10 years ago
we have that same fungus growing when we chip piles of brush and leave it to rot some. not sure what it is.

Posts: 1551
Location: Cascades of Oregon
72
posted 10 years ago
This is the first year I have seen this same fungus in my beds.  It actually surrounded a few potato stalks but didn't appear to injure the plant or the tubers.
I attribute it to the late wet spring but not sure what it is or if I'll see it again.

At the farm I'm at there is a lot of that growing throughout the mulch beds; look for the mycelium web.  From what I understand most mycelia are very important to gardens and the fact that you have it should give you some benefit for plant growth and soil help.

Although not all mushrooms or fungus are good for the garden; many if not most eithier do nothing to plants or are beneficial.

Maddie Bern
Posts: 28
Location: Sierra Nevada foothills, zone 7
posted 10 years ago
Wow, if that's the veil, the mushrooms should be huge when they come up! Some are a good 8 or 9" across.

I will try to post a picture if and when they come up.

Just as harmless as any fungi would be.
Posts: 262
Location: Coast Range, Oregon--the New Magic Land
1
posted 10 years ago
yup, I'm happy when I find fungus popping up, that means the soil is happy with all the mycelium/mycchorizae. The thready roots help plants get more nutrients fro soil and also sharing nutrients from stuff other plants suck up from the soil.

My Blog, Natural History and Forest Gardening
www.dzonoquaswhistle.blogspot.com
"Listen everybody, to what I gotta say, there's hope for tomorrow, if we wake up today!" Ted Nugent
"Suck Marrow" Henry D Thoreau

rose macaskie
Posts: 2134
7
posted 10 years ago
There are bad funguses like honey fungus bad for trees, and mildew on leaves but that comes from wetting them not from hugglculture beds, the austrians  have a tradition of using huggleculture and tradition usually means lots of detailed instructions passed on to your children that people get to feeling are second nature to all adults alll over the world they hardley remember their parents passed the information on to them so they don't feel it is necessassry to pass the information on they think it just comes to people though they pass it on to their children. May be you know if honey fungus has killed your tree and so have the sense not to put that tree in your bed, does Brenda Groth know about the funguses that you dont want she seems to be the most experienced gardener. If you read paul stamets it seems that there are a few, a manageable number, that is not too hard to learn and remember.  agri rose macaskie.
Franklin Stone
Posts: 152
1
posted 10 years ago
It's quite debatable whether or not the Honey Mushroom fungus is really "bad". It does produce lots of tasty, edible mushrooms. And there is a growing body of evidence that Armillaria is not as destructive as the logging industry would have us believe.

young Honey Mushrooms by frankenstoen, on Flickr
rose macaskie
Posts: 2134
7
posted 10 years ago
frankensteen great. i suppose when you star somthing that comes from another culture you need to go through the ins and outs of it.
Paul Stamets does have a foto of a enormouse area occupied by honey fungus mushroomm, he thinks it might be a part of regeneration of hte soil but it might not be too cool in a persons orchard. agri rose macaskie.