William Bronson wrote: Just a question,how did you fit the duct so perfectly to the inside of the cinder blocks?

Now that I think about it, I'm not sure how I pulled it off, but I did.   It was tight enough and scratchy enough that I filed the bricks slightly smoother and used veg oil for lube lol.   I've done this round-to-square sleeve idea before.   My compact RMH ember Hybrid used a chunk of scrap duo-therm stainless pipe which was 5" round, I simply bent it carefully info a square shape which came out to be something like 4.2" after it was squared off.   I knew the 5" duct would be smaller than 5" after I squared it, but it was tight.   If I were to do it again, I would use 10" blocks, which have bigger voids, or use two 4" ducts for mass chambers.   Getting the 5" duct into the blocks wasn't easy.   I started sliding individual blocks over the pipe, rather than slide the pipe into the blocks, because space restrictions.  Individual blocks were snug but they went on individually with the help of patience, lube, and a squared duct.  However when I went to adjust the entire tube it was not easy to slide after I added most of the bricks.  Thanks for calling it "perfectly" but it wasn't done exactly perfectly lol, just to the best of my abailities with my given space and materials.   Like I said. If I were to share any lessons learned, it would be use 10" blocks instead of 8", or mortar it all and don't use any duct.   I didn't trust my novice mortar skills to do the entire bench "air tight" so I chose to stick with the duct, same as most people use in the cob/earthen benches.   Now that it's all together in the bench and such, I will probably render parge the outside of the bench, at least the seams to help avoid any shifting, and possibly even pretty it up with paver bricks, borders, or coloured glass/tiles.   There's a lot you can do with a plain boring bench like this.

Also the bricks seemed to funnel shaped openings, slightly larger mouth on one side compared to the other, so when I slid the blocks over the squared duct, I started with the wide mouthed end of the blocks.   If I hadn't filed the blocks edges and voids with the file, the duct might not have fit.   I felt it was necessary to smooth the one void I every block of the top row to accommodate the duct.

I thought it would be cool to have a small TEG cell hiding behind the bell, to power a PC fan, and pump air under the core or through the other half of the mass, or something,   Just ideas and thoughts right now.

Glenn I would have no problem making a simple slender vaccumm attachment for the thorough cleanings.  That's a good idea since I want to use the vaccumm and I have some tight tolerances.   Most conventional wood burning stoves require many tools and attachments, from poker rods to ash shovels and buckets, and even sweeps.   So having one simple vaccum attachment to clean the unit would be fine compared to all the stuff a conventional stove requires.

posted 5 years ago
Thanks bro

I am currently doing my first indoor test fire and I'm really happy.    I was beginning to wonder when I would get it working, but I'm excited to announce that everything is working well.   I just heard a crack noise while I was typing so tomorrow I will have to double check all the concrete blocks and mortar joints.   It might have been the barrel lid making that noise just now since I'm using a lid from another different barrel with no seal but it's working and I'm glad o have this test fire done.  I will definitely have to investigate/inspect the concrete pavers and base when the fire is done.  Perhaps tomorrow.

I still have a few things to button-up but I just wanted to let you guys know that it's working.  Rectangular riser, tight transition, 4" reducer post-mass, large riser/barrel gap, and my chimney is only currently half erected, but it works.   Thanks for all the help and guidance everyone.   I will post some updates perhaps tomorrow

posted 5 years ago
Last night I had filled the match box with dead elm, partially damp from snow and outdoor storage.   The match box really took off in little time when the dampness dispersed from the wood.   The whole unit seemed to roar, and I was sitting on it.   It's so new and exciting to me being able to sit on part of it and how furious the fire roars at times.   Other times it's quiet as a mouse, like in the latest video.    Last night it roared and burned hot and the mass bench got almost too hot to sit on.   I'm not finished yet with this hearth and I believe it could benefit from more mass.  Sitting on the cushions is fine and comfy, and my butt gets warm, but with a layer of patio-stones or something on top of this bench I could regulate the temperature better and increase my thermal mass battery.   It definitely works well with dry fuel, almost too good lol.   I was questioning the concrete blocks because they were getting too hot to hold at the hot end of the bench.   I was amazed and humbled by the power of the dragon.   So I think I should add some more mass to the bench, as I had planned on doing with the pavers for decoration anyway.   I would like to add patio-stones to the top.  They are available in 16x16" and 24x24" and they are less than 2" thick.  I've bought some 24" stones but the 16's might be better.   This will increase the thermal mass and regulate the bench better, and allow more hours of post-fire radiation.  The outside and thru-wall parts of the final exhaust stack are 4" double-walled b-vent.   It's the double walled pipe used in propane fireplace exhaust and pellet stoves.   Inside I'm using the 5" hvac duct as you can see

Posts: 3846
Location: Upstate NY, zone 5
340
4
posted 5 years ago
Have you measured the flue temperature after the mass? I thought that you would want more channel area to absorb heat, and if you had twin channels you would not have such hot spots.
John McDoodle
Posts: 615
Location: ontario, canada
13
I like...

posted 5 years ago
I have yet to measure any stove/flue temps.   I've only monitored the room temps.  I've been busy trying to get a wood-shed made-up from an old 8ft truck box with a fiberglass truck cap.   But I agree, this unit could handle more mass.   I will increase the mass slightly and perhaps install fins on the final flue and/or bell to extract even more heat.   I've found that the mass is just barely warm in the morning from the previous nights fire.   And the exit from the bench does get too hot to touch after only 5 mins of running from cold.   I would run multiple 4" mass channels instead of the one, if I could do it again, but this is working fairly well and I'm happy with it.    The bench gets hot enough that I could add more mass and it would have no problem heating it up.   The top row of bench blocks get almost too hot to touch in about an hour or two.

When constructing this animal, I was worried about having too much mass or extracting too much heat, but I've learned this little 5">4" unit has no problem heating up the mass, no problem in the transition, and no problem running through the wall into a 4" double-wall stack.   I haven't even finished the stack, there's 5' vertical inside before it goes thru the wall, then it transitions into 4" double-wall going through the wall and another 5' vertical section.   So after my core, the gasses go thru a small bell, tight transition, a bench, three 90 degree bends and one of those bends is the external 4" double walled pipe (used on gas fireplaces and wood pellet stoves).

I can add things like more mass, bell fins, final flue fins, maybe a stove-top TEG circulation fan.  But overall I'm more than satisfied with it for my tiny 20x20 concrete earth berm.

Posts: 3454
Location: Southern alps, on the French side of the french /italian border 5000ft elevation
180
posted 5 years ago
John, a nice way to check if you can add more mass, is to add a barrel at the end of the horizontal run, before the chimney, set up as a bell. 1.86m² of extra ISA. If it works, leave it there, add cob around, or bricks or stones, whatever!

It's a bit tight.

Get a barrel with a lid. Drill a hole on the side, to fit where the elbow is, if your horizontal tube sticks out enough. If not lengthen it 4 inches. take off the pipe above the elbow; place the barrel, the elbow back on the end of the horizontal pipe, but 90° from what it is now, so it faces you. Seal with alum tape. Place the lid on top, project the top tube onto it. Drill the lid, fit loosely, make the tube plunge  into the barrel. Attach the top, seal. Light the stove and see what it does. If good your gain! Then add mass around this bell.

The down tube is called a plunger tube.

Satamax Antone wrote:John, a nice way to check if you can add more mass, is to add a barrel at the end of the horizontal run, before the chimney, set up as a bell. 1.86m² of extra ISA. If it works, leave it there, add cob around, or bricks or stones, whatever!

It's a bit tight.

Get a barrel with a lid. Drill a hole on the side, to fit where the elbow is, if your horizontal tube sticks out enough. If not lengthen it 4 inches. take off the pipe above the elbow; place the barrel, the elbow back on the end of the horizontal pipe, but 90° from what it is now, so it faces you. Seal with alum tape. Place the lid on top, project the top tube onto it. Drill the lid, fit loosely, make the tube plunge  into the barrel. Attach the top, seal. Light the stove and see what it does. If good your gain! Then add mass around this bell.

The down tube is called a plunger tube.

Hi satamax
I do have two of these barrels.   The bell on the core was given to me free when I posted a wanted ad online, and the guys gave me two of them identical.   So I could add a second bell post-mass, and that might be great for any fly ash that may travel near the bench, but so far my fly ash has been very minimal, but i would have to seriously consider the second bell and my wall clearances before I decide.   I would simply like to add some more mass and maybe radiation fins to the existing unit.   But I will consider your suggestion since I do have another identical barrel.

Thanks for following and all the helpful input guys

posted 5 years ago
Here's the temperature last nigh, -22C and it's currently -17C.   Super cold wind and weather came outta nowhere lol.   But it's Canada and were due I guess.

I'm also attaching the latest video on this RMH Where I achieved the highest oven temps out of all 3 of my RMH hybrid designs.   This one is definitely the hottest one I've tested with the oven. 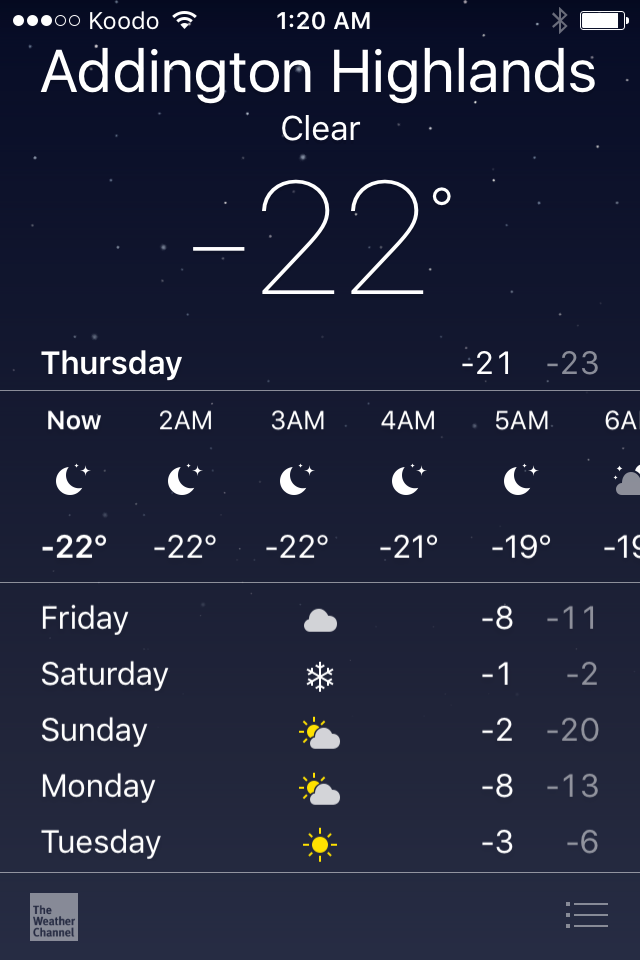 baking veggie pizza on the bell


have a good day, thanks for following