Anyone have any good references for regenerative agriculture and pesticide remediation?

Jonie Hill
Posts: 24
Location: SE Australia
posted 2 years ago
Hi all,
We're seriously thinking of making an offer on 20 acres in a good rainfall area, soils derived from basalt, predominantly W facing (some bits NW, SW, S, N), with at least 1 spring fed dam, 1 other dam which may be spring fed or just runoff from the property.
We have not found much within our budget (or even that is outside our budget but that we like at all), in over a year & a half of looking, even outside of our preferred area.
This property we like, it feels good, has a nice environmentally-minded neighbour to the west (predominant wind direction is from there) and it's in our budget (no debt to purchase & we have the option of borrowing from family to make improvements).
It apparently ran dairy cattle until the last 2 yrs when they grew potatoes & consequently, roundup has been used.  We don't like this, but feel perhaps it's something we have to compromise on.  From what we've found, it's almost impossible to find land that is a) not really steep (and classed as a landslide hazard) b) isn't a bush block, or at least right in the middle of or next to large areas of bush that put you in real bushfire danger c) hasn't been sprayed, unless it's in an area that's really too cold to grow much.  (We want to do mixed fruit, nut, fodder & wood trees on contour with management intensive grazing of a small number of cattle).

I know this kind of question has been asked before, but I'm hoping some of you might have some good references (anything new?) about healing pesticide-affected land with regenerative farming?  I know we'll be able to grow things and improve the soil health, but I am concerned about whether they'll be safe to eat for a long time....though I know it may be no worse than what you buy in the shop (though we try not to buy anything not spray-free or organic).  We would really like to clean up the water on the property too, hopefully to drinking standard at some point, any evidence that this is possible without very costly remediation?
How many of you have compromised on buying land that has had chemicals used on it?  Have you tested soil or water after years of regenerative farming practices, and if so, what have you found??
thanks for any & all thoughts on the topic, it's such a hard one for me to make a decision on...
James Freyr
steward

posted 2 years ago
Hi Jonie! There’s a lot of literature out there on regenerative agriculture, and also some books on mycoremediation, which is using mushrooms to remediate a soil. A quick search on amazon for instance will result in many books to choose from. I see you mentioned that herbicides have been used in the past and dairy cows have been on the land as well. Have you sent a soil sample to a lab for testing? If not, there’s no real good way to know for sure what is and what isn’t in the soil, and this may be money well spent and a  good first step to get a sort of “bill of health” before buying. Some chemicals are much more persistent and others can break down somewhat quickly. I believe that just because poison has been used in the past doesn’t mean the soil is necessarily ruined.

Something as simple as taking mushrooms, any mushrooms, and whirring them up in a blender to make a slurry, and applying this to a soil is one great way to help remediate a soil. Mushroom fungi can break down nasty man-made chemical compounds into individual elements.

Permies has the fortune of having fellow community member Dr. Redhawk contributing, and he has gifted us his knowledge on soil, and his writings can be found here: https://permies.com/wiki/redhawk-soil This is where I recommend to start reading wether you want to grow a nature reserve, grass for grazing animals or grow trees and vegetables for yourself. :)

Jonie Hill
Posts: 24
Location: SE Australia
posted 2 years ago
Hi James, thanks for that reply.  I've read a Lot of stuff in the past, but unfortunately don't have the memory for it all....and seeing as we're under a bit of time pressure, thought people could have some good pointers to narrow my search - I'll look into mycoremediation.
If we make an offer we will make it contingent on some soil & water testing.
Actually I didn't mention about one spot in particular that was concerning, down a slope from one of the fields, by the little stream that comes off a spring, a dam, & runs into a smaller dam, was a patch of muddy soil which was bright orange & had a sheen to it, you know that oily kind of sheen, like if you have petrol in a puddle.  We assume this is herbicide runoff or seepage, what do other people think?  So we guess that it would be good to take a water sample from above & below that point...

As people have said before on the forum, we can't exactly not use any contaminated land as so much of it is contaminated...but struggling to get to optimum health myself (with glyphosate possibly being one of the reasons I'm not there), the decision is a very hard one to make!  But otherwise it's such a lovely property & we can imagine how beautiful it will be in 20 years time....

Jonie Hill wrote:
If we make an offer we will make it contingent on some soil & water testing.

Excellent idea! I hope the tests come back with good news.

Actually I didn't mention about one spot in particular that was concerning, down a slope from one of the fields, by the little stream that comes off a spring, a dam, & runs into a smaller dam, was a patch of muddy soil which was bright orange & had a sheen to it, you know that oily kind of sheen, like if you have petrol in a puddle.  We assume this is herbicide runoff or seepage, what do other people think?

That sounds exactly like a microbial bloom!! In my opinion, I really doubt it's herbicide runoff or seepage. My neighbor has a small pond, and for a while now it's been red/orange with that oily looking sheen on the surface, and that is a hallmark of some sort of algal/microbial bloom. I have a bloom in one of my ponds, but it doesn't have the color that my neighbors pond has, but it does have the sheen on the surface. He has an active herd of grazing cows which stand and pee & poop in the water providing nutrients to support the bloom. My farm currently does not have cows, but did until last year. The conditions get just right and something starts growing, and it tends to happen rapidly, going from regular pond looking to a bloom in a couple days. Blooms will subside when the pond gets cold/freezes.

posted 2 years ago
Desert or paradise 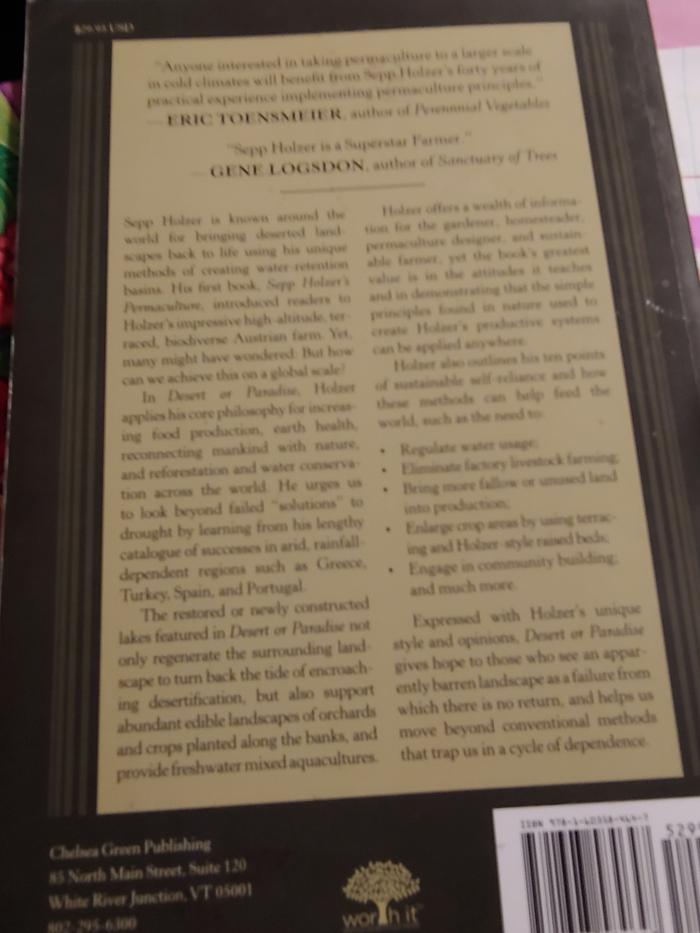 Grady Houger
Posts: 96
Location: Eastern Washington
25
posted 2 years ago
To quickly detect a lands level of contamination can be done by one with a bit too much experience in the dark arts of chemical pesticides. To recognize the signs of stunted growth, and what isn't there. Common to some types of herbicide is a succession of weed species that colonize the bare spot of a strong application.
Some obvious signs are fields with only broadleaf plants or only grasses. A line of totally dead soil near a field gate or barnyard is where a sprayer cleaned out or did a start up nozzle check.
If you can speak softly and ask around you might find the chemical salesman who knows everything about what's been bought and which weeds have been the target. A skilled chemical salesman knows the history of fields in their region so they can supply the industry standard advice of using different herbicides every few years to avoid herbicide resistant weeds.

Each pesticide chemistry has a set of soil and biology conditions it is officially active within. Usually time, rainfall and soil ph are the label metrics. They all break down eventually, but there are a few that can hang around for decades in certain conditions. There are tests, but nothing I've heard of that's going to detect old spray residue. Most tests are designed around detecting prohibited levels of pesticides in hay or grain at the international shipment level. The other test often used by university researchers is taking soil samples, planting a mix of seeds and seeing which types of plant can grow.

To heal soil, what I've found so far is any methods that increase a soils depth, volume, organic matter, and amount of biology will be the processes that break up and metabolize the pesticide molecules. The organic label minimum is 3 years. From what I've heard liking into conventional farmers transitioning to organic systems, having a couple of really successful crops where plenty of earthworms show up is a good indication things are alright. But ultimately one can't know for sure, so it will come down to your tolerance for risk.

Jonie Hill
Posts: 24
Location: SE Australia
posted 2 years ago
Thanks for the thoughts Grady.
I've found a lab in Aus that will test for heavy metals, organo-phosphates & organo-chlorine pesticides and glyphosate separately for AU$630.  Don't know how accurate they are of course, but they do complete testing for organic certification....
We're looking into finding out if there were any spots on the land that weren't cropped, so maybe we could grow veges there while remediating the rest of the land and growing trees...