How long does it take to grow a Wofati grove to build a wofati of modest means?

David Kunkle
Posts: 2
1
posted 1 year ago
I've been attempting to figure this out myself, but since I grew up in Nevada and later Navy took me to San Diego I can't really picture what amount of time needed to grow my own home.

If using softwoods;
Pine as an example would it be possible to buy land, and then plant a sacrificial grove specifically for the building materials. If so what lead time we looking at in an approximation.

If hardwoods are needed;
I have close to no hardwood experience father did cabinet carpentry that was all have retained from childhood observational learning.

If other materials are needed;
In example, the wood duff, straw for building materials, or anything I've not seen from the books/kickstarter videos requirements etc.

My thought here would be regardless whats on what property it would be helpful to understand the lead times so when doing estate planning we can plan groves for expansions or new buildings as children grow and need their own space/ family expansion.

My initial thoughts are at least a 5 if not 10 year lead time may be necessary if using only softwoods, but we could easily triple the time needed for using hardwoods. Is it possible to grow and use Bamboo for some of the material  as in the following image - <

>. As I was able to pick up from the google and the rest of the interwebs some varieties of this black bamboo can grow to the 45 meter mark in a few years, and is used extensively in construction efforts. If bamboo is used with the lumber as an supporting material not a replacement would this speed up the investment time needed to cultivate the needed mass for the home?
Travis Johnson
pollinator
Posts: 4958
1154
I like...

posted 1 year ago
That is an interesting question, and one I have never really thought about because I have a pretty good sized established forest that I would pull my wood from. However, it is an excellent point, and idea: growing a purpose-build forest for a WOFATI. While I do think, "it depends" is a qualified answer, I do have some real world experience growing forest on my Tree Farm, but keep in mind this is in Maine.

Assuming you would use hybred species of trees, the growth time for either hardwood, or softwood, would be about the same for the same sized tree. This would be a type of Popular for hardwood, and most likely Hackmatack for the softwood. In this case, the softwood would be the better choice because Hybred hackmatack is a naturally rot resistant wood. So rot resistant, they use it for making pilings for docks in the ocean.I also have a lot of experience with this tree, having grown 10 acres on my own land, planting it, maintaining it, and having even harvested it, so I feel qualified to give some definative answers.

Hybred hack grows to about 60 feet tall, and is about a foot in diamteter in twelve years time. At the recommended, 10 feet by 10 feet spacing, the yield is about 30 cord per acre. Since a person would be using almost all of the tree to make a WOFATI, I would say a person would need at least three acres of trees to build one, but five might be a better plan, just to make sure they had enough wood. In this case, "all" would mean the trunk of the tree, the smaller tops for saplings, and the limbs for infill. Heck even the needles could be used for insulative duff because a hackmatack is unique in that they lose their needles every winter, so the base of the forest is litered with thick needle-duff.

Knowing how much wood I had in a pile after growing hybred hackmatack for 12 years, I would say 3-5 acres of that tree, growing for 10-12 years, would give you what you needed to build a house that was naturally rot resistant, and with enough size to support a heavy soil load above on some memembers.

Here is a picture of my hybred hackmtack tree plantation at about the 8 year age. 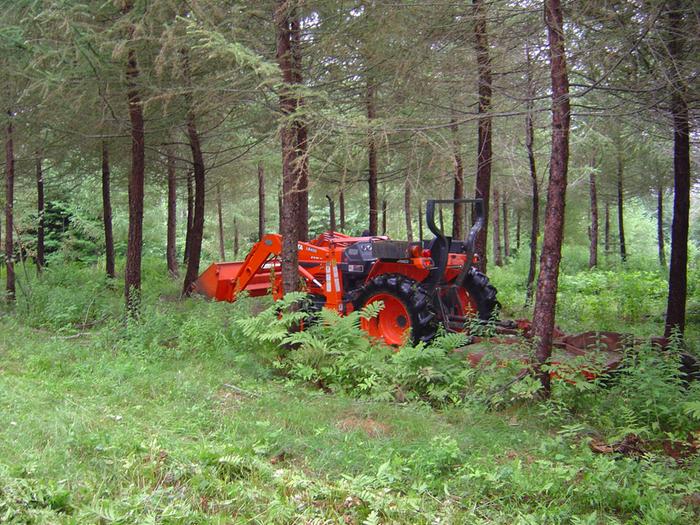 David Kunkle wrote: ... Is it possible to grow and use Bamboo for some of the material  as in the following image - <

>. As I was able to pick up from the google and the rest of the interwebs some varieties of this black bamboo can grow to the 45 meter mark in a few years, and is used extensively in construction efforts. If bamboo is used with the lumber as an supporting material not a replacement would this speed up the investment time needed to cultivate the needed mass for the home? 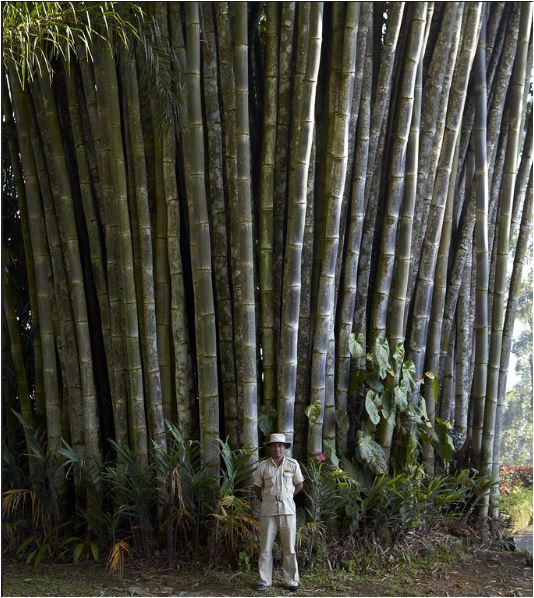 I snipped the image from Flickr for you..."in a few years"? Wow.

posted 1 year ago
Eucalyptus trees would be another option in the right climate. I think they get to be 8 inches in diameter and 100feet high in only 10 years. It is one of the reasons our paper mills are closing, our trees just cannot get the growth that they can in other locations.
Joshua Myrvaagnes
pollinator
Posts: 1507
Location: Massachusetts, 6b, suburban, nearish coast, 50x50, full sun, 40" year-round even distribution
142
I like...

posted 11 months ago
This is a really pertinent question to me as I'm starting a land search, and also seems like for some people it could be a "wrong" question.  What I mean is, part of the idea of making a wofati is the "freaky cheap" aspect, and making use of trees you were going to clear anyway to build (or for cultivation/pasturage).  Certain ideas can be so exciting that then everything starts to look like a nail when really it's not a nail.

So, if you're starting with clear-cut land, having to grow pines, you may be making more work for yourself.  You might do better to buy some trees from a neighbor who's clearing them anyway for a house site...or from a mill that has trees they can't use for commercial purposes for whatever reason...or even straw bale might end up being more consistent with the freaky-cheapness in some circumstances if there are abundant straw bales or you could let straw grow in a year on a pasture that would not grow trees for a long long time.

I'm not speaking from experience or having run any numbers here, just trying to talk in general and to look at the big picture.

Growing bamboo--this could be awesome, or it could be a disaster if it's an invasive bamboo that then has huge costs to destroy.  I don't know enough about bamboo to feel comfortable dealing with living bamboo.  If I run across someone who's growing it who I can trust I can buy or trade for it, but it wouldn't be my first choice to look at growing something so foreign _and_ fast-growing.

I'd love updates from the original poster. . .

I think the main starting question is what's the abundant resource?

If time is an abundant resource (as in, you can wait 20 years for the wofati to be built, maybe because it's mainly for future generations) then planting some trees--maybe hybrid, maybe not--makes sense, or simply letting the land reforest itself however nature does it, could be the path of cheapestness.  If firs are the climax species then that gets tricky, but favoring a little bit by cutting the competitors once a year would be a cheap solution (let's say you can only visit the land for a day a year).  If trees are the most abundant resource or straw or scavanged wood or ... then the situation changes.

If Paul can create the "wofati" concept, then I get to create the "wofati-ish" concept, which is a way of naming something that's distinctly not a wofati and so doesn't confuse the defintion of what a wofati is, but maybe takes some of the most relevant essential principles and applies them to a given situation.  I think we should talk about wofati-ishes here when we're not actually talking about a wofati.

Wofati-ish designs could even include getting a shipping container, piling soil on top in a pitched manner somehow, and adding "eaves" piles of dirt on 3 sides that go down to touch the ground....or maybe taking an existing house and burying it in soil...

Again, part of the idea of the term "wofati-ish" is to steal the most relevant principle from the wofati idea even if it's not a wofati, and part of the idea is to avoid using the wofati term inaccurately to refer to something that doesn't fit the strict wofati definition.  Therefore to ensure clarity and purity of actual wofatis.

That being said, I've got my heart set on an actual wofati at the moment.

In some cases we can have both--build a temporary quas-ati wofati-ish, while growing or regrowing trees for the future house...

Joshua Myrvaagnes wrote: I'd love updates from the original poster. . .

Sorry for not returning to this thread faster. My sincere apologies.

My reasoning for inquiring into this line of questions was my attempt to understand how long it would take to grow the resources needed to make a home, and how large the area was needed so I could develop a plan. My hope is to help my children and their kids plant develop their intentional resources necessary for their own homes, and to provide guidance as needed when they are in need. So later as the resources are growing they can tend with their live stock learning polyculture as a practice, hopefully with enough land to make some forested groves surrounded by silvopasture for each of them to manage themselves.

I'm currently planning the main estate now and hoping to develop furthur plans for the necessary infrastructure for success, while also ensuring I can feed us when I reach retirement and can no longer perform the big labor tasks required for projects.

I like the idea of surrounding the wofati homestead with the forested areas, and the silvopasture outside surrounding the forest. Since it's my ideal area I would surround the property in a raised retaining wall with a dense thorny hedge wall to discourage predators, while provoding habitat for the wild and pollinators. And best of all privacy, productivity, pollination for the free cost of free fifty once established.