Iris as guild members (not including water iris)

Kathleen Corum
Posts: 6
1
posted 2 years ago
With regard to "guilds":  I'm not hearing much mention of iris's... specifically NOT water iris's.  I live in the high desert of Arizona.  I'm interested in building guilds and I do not know what to think about iris's in that context.  They are survivors ... drought tolerant... and persistent.  They'll come back even after a bad year for them usually.  I haven't seen much pollinator support coming from them although I wouldn't totally discount that function.  I do believe we need to be aware of the need for pollinator support here, especially in some seasons.  I've been so focused on edibles, that I haven't paid a lot of attention to flowers and would say in general that I'm not too interested in weedy little flowers ... I'm reconsidering that point of view.  So ... can anyone tell me what they think of iris's as contributors to a permaculture guild?  I'd acknowledge that they can help fight erosion.  But mine this year were very tall and lush and produced an abundance of flowers ... to the point that they're taking over the world and I'm trying to decide how much is too much.  I've moved some to under my fruit trees but I've heard some comments that they compete with the trees (a common 'non-permie' position to take).  I've recently heard that amaryllis provide mulch under trees, but the iris don't die down in that way.   COMMENTS?
Lauren Ritz
pollinator
Posts: 726
Location: Utah
179
I like...

posted 2 years ago
I don't know about using them in guilds. They do spread, roots between six inches and a foot down depending on the variety. So surface mulch might not be a big contributor but I think they would eventually improve the soil as the roots die. If you're working with established trees there shouldn't be much (if any) competition because their roots occupy a different zone. They might work for chop and drop, particularly in the spring after blooming. There is information out there for both phytoremediation and nutrient accumulation for iris, but it's all studies buried behind paywalls. According to a brief search Iris is partially or mostly self-incompatible, so it must be doing something for the pollinators.

posted 2 years ago
I'm including Bearded Iris in my Kitchen Garden and Food Forest just because I like them and they do well here.  I think they could make an effective barrier against creeping weeds if one needs a "purpose" besides beauty.

Iris florentina is the white flowered variant of Iris germanica now classified as Iris germanica nothovar. florentina. It is cultivated as an ornamental plant in temperate regions almost worldwide. It is also grown to produce orris-root, a scented substance used in perfumes, soaps, tooth cleanser, clothes washing powder. Medicinally it was also used as an expectorant and decongestant. It is made from the rhizomes of Iris florentina, Iris germanica and Iris pallida.

I love all iris for their beauty and longevity.  They do have some ability to crowd out other plants...except bermuda grass 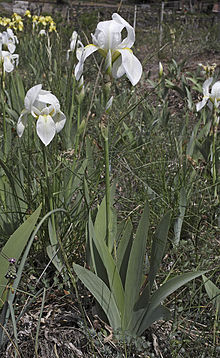