posted 1 year ago
I have raised beds for my veggie garden, and I love to companion plant.  I've spent a great deal of time on the internet trying to figure out the best combinations.  The problem you get with getting information on the net is you don't know how accurate it is, or you don't get all the pertinent information.  This year I planted sunflowers in 3 out of 6 raised beds.  Not knowing the damage I was doing I left the sunflowers to go to seed, because I enjoyed watching the birds.  What I didn't know until reading a post on permies is that sunflowers have an allelopathic chemical that inhibits growth. This has been the worst year I have ever had with my garden, as far as production.  I'm not saying it's the sunflowers fault because everyone I talk to is saying the same thing, so I think it was more a weather thing then the sunflowers.
It is time to ether chop and drop or remove the summer  stuff, and plant the fall/winter plants.  I see tons of sunflower seeds in the soil, so I'm asking for advise to remove or neutralize the allelopathic chemical, so my new seeds will germinate.  I always refresh my soil with organic compost and organic chicken manure, and what ever else I have that I think will help, but now I'm unsure.
My plan at this point is to remove the sunflower stalks.  I think I will throw most of them in the garden pathways to help prevent weeds.  Try to rake up as many seeds as I can and remove them.  I will probably give them to the chickens.  This is were I need the help.  Is there something I should add to the soil in addition to what I normally do to help the soil repair itself.  Should I only plant plants in these beds and put the seed in the others?
I would appreciate any and all wisdom with my dilemma, I don't mind learning the hard way, but after a crummy summer it would be nice to have a little winter success.  Thank you for your time.

brad millar
Posts: 133
Location: Kooskia, ID
36
posted 1 year ago
I’ve never had an issue growing sunflowers with anything. Just plant what you normally would plant. Chop the sunflowers as they come up if you like.
19BE8144-CB9D-4397-8E5B-5CC6A13DB861.jpeg 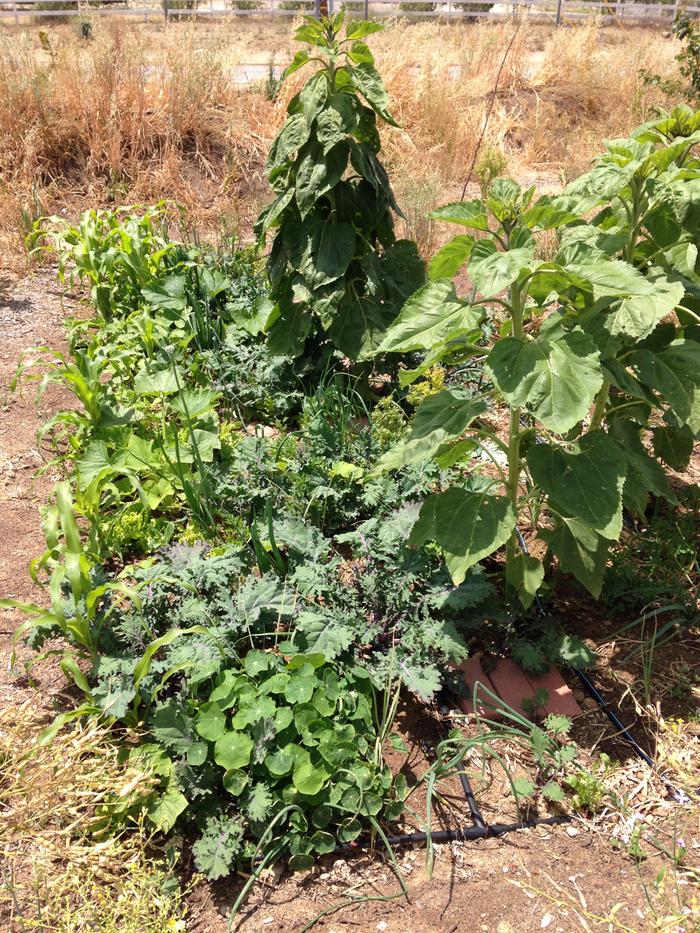 posted 1 year ago
hau Jen, the allopathy of sunflowers is minimal for most plants so I really wouldn't worry about it until you see signs of stunting and then, make notes on what plants seem stunted so you know what not to plant near the sunflowers.

For your raised beds (where you grew them) all you need to do is make additions of mycorrhizae to the roots of the plants you install next, the fungi will do a lot of remediation of any allopathic substances in the soil.
I love that you are adding compost yearly, to get the dropped seeds out you would need to sift all the top 12 inches of soil in those beds, the screen needs to be smaller than a sunflower seed.

The weather of 2019 has changed most of the gardens in most of the world, either no rains that should have come, or too much rain in places where there usually was less rain.
In Arkansas we got our normal Feb. rains but the events were far heavier rain events than usual, and these rains continued up until the end of July where usually they stopped by the end of May or the first two weeks of June.
Almost all fields were saturated and remained that way long enough that most crops were not in the ground until two months past the normal end of planting season for that crop.
The early crops like strawberries were poor because the plants were soggy from all the rains. Tomato vines rotted before they set blooms in many areas and others the blooms didn't show up until July or August.

This year should  be an eye opener for gardeners and farmers because the next few years are most likely to be very similar to this year.

posted 1 year ago
I had no idea about the sunflowers. I usually have some scattered around the garden, the rabbits love to eat them and they make me happy. Right now I have a bed planted with maybe a dozen and the following:
collards
onions (green and globe)
cilantro
dill
sorghum
radishes
lettuce
chysanthemums (which are SUPER happy)
kale
there maybe something else i'm forgetting.
It's been a heck of a year indeed. Good luck as you get ready for the next season!
Travis Johnson
pollinator
Posts: 4958
1154
I like...

posted 1 year ago
Depending on what you have for soil, it could be the sunflowers that caused your demise. They are hyperaccumulators so if you had high zinc, copper, or other heavy metals in your soil, it would have pulled them in to the plant.