posted 1 year ago
Hello. I am looking for a little feedback on my plans for having ducks vis a vie their swimming needs/wants.
I am wondering about what types of containers and what depths (inches, feet) are needed for the average duck to
swim in verse stand in.  I will have two ducks. Probably not a larger breed but a golden hybrid layer or silver appleyard.
My options are typical home bathtub (~ 20 in deep), bisected blue 55 gallon plastic drum (divided either on short plan
or the long plane), something different.
I have seen Geoff Lawton's use of a a tub.
Any thoughts on what is sufficient?

Many thanks for your input.

posted 1 year ago
I have always used those small Kiddie Pools for toddlers. They are cheap to buy, and because of the way ducks foul their water, you will need to dump the water and start fresh every other day or so. You do not want to drain and fill a lot of water in that scenario, so a smaller pool is fine. They are plenty dep for a duck to drink, wash and swim.

Ducks do not have to swim all at the same time, so I have had a dozen ducks to one Kiddie Pool and they were just fine.
Ryan McGurl
Posts: 11
Location: Morehead City North Carolina
1
posted 1 year ago
Have you looked into khaki Campbell ducks? Supposedly they don’t need swimming water.

We haven’t started with ducks yet, but local farmers have recommended cement mixing trays. Sturdier, longer lasting than a pool, and easier to clean.
Jay Angler
gardener

posted 1 year ago
I was given a pair of 50 US gallon stock tanks -
My hubby installed ball valves on both. The one I use one for Muscovy ducks, which free-range, has a "T" leading to two 1 1/4" pipes which I drilled holes in, so when I want to drain the tank, it spreads most of the water nicely, before I have to tip the rest out and rinse. I move this one around the field to "irrigate" the areas that need it. The ducks think the draining process is fun to play in, and love splashing in the water.
The one I use for Khaki Campbells, I eventually installed a coupling and a very long pipe that I can move around to water different areas of my dulcis bamboo patch. The Khaki's are too small and flighty to cope with our flying predator load, so they're in a stationary run. My winter goal will be to add at least a second run, and possibly a third so that I can rotate them through these different areas. As it is now, I have to keep adding mulch and periodically shoveling out the muck and moving it to a compost heap.
Khaki Campbells may not "need" to swim, but they adore their stock tank and often move in to splash before it's even full. I'm a wimp, so dumping the whole tank would have hurt me. A bucket system would work if there were good places to dump water nearby, but the ducks need so much fresh water, the area near their run gets pretty soaked. The new pipe system is much better.

If you can't afford the expense of a stock tank, and don't want anything as flimsy as a wading pool, consider other available free things. It's a balance. I would definitely want something I can tip and clean, but also something that's large enough they can splash in. I do decommission it for the winter due to risk of freezing.

Ryan McGurl wrote:
We haven’t started with ducks yet, but local farmers have recommended cement mixing trays. Sturdier, longer lasting than a pool, and easier to clean.

We use cement mixing trays. They are truly the best portable option I've seen.

Also, ducks love water... if you want them to keep their feathers in good condition and avoid mites etc. water is essential. It's a matter of hygiene not just enjoyment/enrichment.
Beth Johnson
pollinator
Posts: 181
Location: Lewis County, WA
48
I like...

posted 1 year ago
I have two kiddie pools. The were on sale at a local hardware store for about $10. 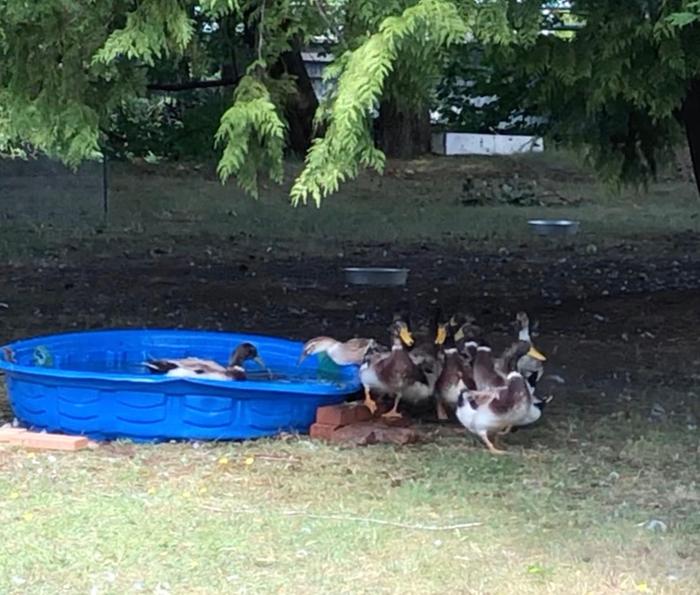 Jay Angler wrote:I was given a pair of 50 US gallon stock tanks -
My hubby installed ball valves on both. The one I use one for Muscovy ducks, which free-range, has a "T" leading to two 1 1/4" pipes which I drilled holes in, so when I want to drain the tank, it spreads most of the water nicely, before I have to tip the rest out and rinse. I move this one around the field to "irrigate" the areas that need it.

Thanks that is helpful. I looked up your tank dimensions. It is 1 foot deep. One of the questions I have been trying to figure out is how deep to make it. The duck legs don't extend too deep underwater it sounds like?
Because of space and being in an already water rich environment I am not inclined to make the tank too large for them (given the space I would love to have a pond...).

Your drainage system sounds useful to consider. I like the mobility of it. Move the empty tank, fill, ducks swim, etc., they fertigate with the water where you direct it.

A parallel question with the water management is how to apply it to garden beds. Perennials is easy, but it sounds like from my reading that even though duck water/manure is not hot like a chickens you still would not
apply it to foliage of your annuals.

The plumbing issue, Jay. Your 1.25" PVC drain does not clog or do you have to filter it? Matter of making the openings large enough?  Wood chips somehow ending up in the pipe might be my biggest worry.

Thank you for the feedback.

We haven’t started with ducks yet, but local farmers have recommended cement mixing trays. Sturdier, longer-lasting than a pool, and easier to clean.

This isn't really true. Khaki Campbells are a bit more petite but need access to open water as all ducks do. Ducks need water for a couple of reasons:

1. Bathe instead of dust like chickens, ducks will typically bathe daily with the correct water access. Ducks use water to preen essentially.
2. Their bills are specialized for aquatic environments and they need to be able to cleanse them with lots of water.
Purity Lopez
Posts: 55
21
posted 11 months ago
I have 12 Runner ducks. As has already been posted, depending on how many ducks you have, they will foul the water so much in several hours that it is unbelievable.  Over the years I have refined the duck bathing venture.  If you are prepared to dump the water after several hours, it will be a good fertilizer/watering tool that saves you money.  I bought a cheap $50 sump pump off of Ebay and attached it to a garden hose.  I move the garden hose around every day.  I placed the wading pools under a tree (and moved them around every few days) so that when I wash them out, the tree gets the water.  Kiddie pools proved to be too cumbersome and they didn't hold up past one summer, and those are getting a little expensive.  However, the used ones can be used to put plant pots in.  This way the left over water from watering is still in the kiddie pool and gets re-drawn up by the plants, minimizing water loss.

But back to the ducks.  I tried the 50 gallon plastic stock tanks.  I started having trouble with the ducks hurting themselves getting in and out and one broke her leg.  So then I had to spend the time digging a hole so I could put the stock tank at ground level.  Again, you can use a sump pump to dump it.

The best thing I've found is the extra large size mortar mixing container at Lowes.  They are moved around easily, are deep enough for them to have some fun and the weaker ducks can still get in and out easily without hurting themselves.  I fill these up daily and move them around to irrigate trees.  I also took old 3' satellite dishes and put them at ground level - my older ducks really like these.

I use this duck water for everything, all veggies, vines, trees, etc.  but my ducks are being fed organic food and no corn in the summer so I've had great success with that.  I taper off in fall and move the duck ponds away from the trees.