posted 1 year ago
Somebody I follow recently turned me on to the Shelter Institute and timber framing.

Of course they're a little biased, but they claim that timber frame is not only stronger, but also better insulating than traditional stick frame construction.


Could anybody confirm or deny this?  I'd love to hear your experience.

Also, they make the statement that people choosing stick over timber usually comes down to cost.
I was wondering, would taking the time to glue up conventional studs into posts be an option?
After all, lumber companies make glue-laminated beams all the time, so...?

posted 1 year ago
I totally believe that timber frames are stronger than traditional stick frames. Stick framed homes are generally put together with 3 inch smooth shank framing nails, which are relatively easy to pull out. Timber framed home, because the timbers are often much larger dimensionally than any 3 inch framing nail, are often put together with very long timber screws. They can also be put together with mortise & tenon joints which are then locked together with hardwood pegs so they don't pull apart. Both are strong under a single vertical stress or point load from gravity. When lateral and lifting forces start getting involved, brought on by high winds, seismic events, and even tornadic winds that want to lift a roof off of a house, the timber screws hold two pieces of wood together much better than framing nails.

I personally would shy away from including glue to the framing of a stick framed home as this will resists normal expansion and contraction from the changes of the season, but nails and screws can allow this subtle movement. Building a stick frame home using 100% screws instead of framing nails would, in my opinion, result in a higher quality structure able to take higher winds before compromise occurs.

As far as insulating, I think there are too many variables as far as types of insulation that could be used, for me to agree with a general statement that one insulates better than the other. Timber frames do have something that a lot of stick framed homes don't have, as far as the framing part goes, and that's thermal mass.

posted 1 year ago
I'll be heading out to Maine here in a few weeks to take one of Shelter's Post & Beam classes, and I'd say they are generally a good source of information. I'll try to answer your questions, but take note it's a huge it depends. The timber frame is just the structural piece of a building and what you do after that has tremendous effect on its strength and insulation.

On strength: Oh boy, strength is one of my least favorite words in construction. Buildings never fail in strength. They fail in deflection. A wooden beam doesn't crush (strength), it splinters apart (deflection). The way that most buildings fail is in shear — kind of like pushing sideways on a house until the lumber deflects and splinters apart. Pat described using SIPs (Structurally Insulated Panels) for strength, which gives you two layers of shear walls (the OSB on either side of the insulation). This is double the shear walls that a traditional stick framed building has. That being said: you can easily have a traditionally framed house built with extra shearing support, or add in steel/concrete moment frames, etc, etc.

On insulation: The big win he's talking about here is using SIPs and having a perfectly uniform building envelope. In other words: >90% of the envelope is made of insulation (styrofoam). The R-value of styrofoam is about 5 per inch, while lumber is only about 1.5 per inch. In a traditionally framed building I believe the building envelope is about 25% lumber, 25% windows, and 50% cavity (insulation). In a SIP building, it's around 5% lumber, 25% windows, and 70% cavity (insulation). When you calculate the effective insulation of a building, you have to multiply the R-value of all your materials in the envelope. So a traditionally framed house would be something like 25% * 1.5 * 6 (2x6 construction) + 50%*5*6 = R-17.25. A SIP house would be 5%*1.5*6 + 70%*5*6 = R-21.5. In practice it's a little more complicated than that, but the overall theme is that when lumber is part of your building envelope (traditional framing), you will lose a lot of insulating power. You're also going to have a much better air seal in a SIP house since there are fewer gaps to fill.

Now back to the whole it depends angle: there are tons of ways to get these same benefits in traditional framing. One easy way is to pull the studs inside the building envelope just like a timber frame. This is usually called a Perfect Wall.


I was wondering, would taking the time to glue up conventional studs into posts be an option? After all, lumber companies make glue-laminated beams all the time, so...?

You're going to need a jointer, a planer, and so many clamps you're going to want to jump off a cliff. You're better off purchasing engineered lumber like LSLs and LVLs if you want to go down that route. You can definitely screw multiple 2x4s together to make up a post to bear load, but you won't be able to use these in a timber frame engineered house since the members need to be solid to handle the bending forces.

posted 1 year ago
You are trying to compare apples with bananas.
The real question may be should be, which one is adequate for my purpose.
If you are storing hay in the roof or just living in a house.
Nails pulling out of stick frames is not a problem, but if you want more security use either glued or galvanised nails. I used galvanised ones

posted 1 year ago
To me there is no real question that a timber frame is stronger, by its very nature, the frame itself is self-supporting, and then the outer sheathing is added, and only adds more support.

But a stick-built home is strong enough.

I cannot remember what year it was, but one year Florida got hit with (3) back to back hurricanes, and the building industry really had to reconfigure a lot of stuff to make things work in Florida. They said to heck with it, and some of the stuff they incorporated to make houses there stronger, now are what they offer for all of us. Pneumatic nails are one such innovation. Gone are the clipped heads and now full headed nails are used. But they also have glue on them. When driven so hard and fast into the wood, that glue softens instantly, and then bonds to the wood after the nail is driven home. If a pneumatic nailer is used to put a stick frame house together, it is not only nailed, it is also glued together at the same time, which I think is ingenious. This is why pallets are so hard to pull apart now. It is actually easier to cut the nails, then to pull them.

As for superior in insulation, a timber frame is superior there, but there are stick-built methods that make a well-built stick-built, better than a crappy-built timber-frame, but also the opposite is true. If a person paid attention to a host of details like limiting their windows, orienting the house for passive solar gain, and that sort of thing, a person with a stick built home will do well. I know because I did a lot of things right in this house, and I got a super-insulated home that only losses 1 degree per day the heat is off. That is pretty darn good.

But a person does not have to have one or the other. My house is stick built, but also framed inside with notched timber frame beams. I feel I have the best of both worlds. 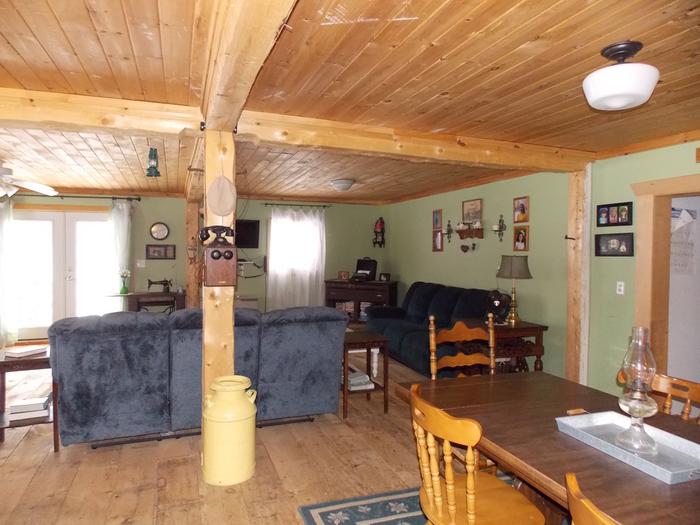 I am not super keen on SIPs for a variety of reasons..

The more natural infill options are not necessarily going to do much in structural terms. So it's down to how well and heavily the building is designed and built.

My tiny house is 2x4 framed, sheathed with 1/2" ply outside and 5/8 ply inside. All screwed. At the midpoint I put a 4x6 cross-beam, just above head height, installed with 1/2 thick steel brackets, heavy bolts, and structural screws.

Due to terrifying unplanned maneuvers when moving it, I can state with confidence that it can survive an extremely serious earthquake combined with 80KPH winds completely unharmed... it is way too heavy to move often, but it is strong.


Meanwhile, I have some farm-grade 'timber framed' structures.. one has been here since at least 1971, yet it has on one side unbraced 6x6 beams with 13'(!!) spans, bearing the roof load of half the 20' wide building... then there is another span of 11' that uses 3.5" square beams instead. The neighours tell me 6' of snow overnight was not unusual, 20 years ago... madness.

The 6x6 posts supporting these beams were so rotten a replacement had to be 3" longer, as the original had *squished* by that much. And the building stayed standing, presumably out habit.

posted 1 year ago
Buildings are kind of an anomaly...in one sense they have this massive amount of stored energy. I mean consider how massive a crane would have to be to try and pick up the average sized house...it would have to be massive, and powerful. And so there is all that energy stored, just waiting for something to give for it to work with gravity and just fall flat.

But yet few do.

There is so much redundancy in a building, that even the most crap-built ones stand up for a long time. I just visited an old Hermit house that has not been lived in for 70 years, and yet it is still standing. I have seen outbuildings at farms standing despite some crazy building methods.

My home is a testament to that, and while I am not trying to convince anyone of how to build, my hybrid home of both being stick-built and conventionally framed, kind of shows how both can be used to make an incredibly strong home. In my case, I have a trussed roof. But the weak point of a trussed roof is the center of the bottom cord. If that was to break, the whole truss would fail. But in my house, I have 8x8 beams under that location, then kept there by beams going to either side. There is no structural reason for those big beams to be there; the truss can span the full width of the room (24 feet) just fine, but I wanted the look of massive hand cut beams, and if ever needed, they are in place. So together, it is a super-strong home.