C. Letellier
pollinator
Posts: 468
Location: Greybull WY north central WY zone 4 bordering on 3
110
posted 1 year ago
Quick explanation I live in a passive solar home built in 1984 that still needed a bit of auxiliary heat.  So last year I added a thermal collector on the west end of the south wall.  One of the results is learning without the propane heater the house needs more air interchange.  So that has me looking at air to air heat exchangers both commercial and DYI.  Now I also find I still need to about triple the amount of active collector.  So it has me asking if I can do both at once?

So if I move to the south wall near the other end of the house I have another upper clearstory  opening window to come in through and bare wall for the collector.  Here is the photo of it with a few lines overlaid onto it.  The red rectangle is where I want to put the collector to heat the incoming air.  The orange triangle is an empty cavity under the stairs where I would like to bring my exhaust air out.  The green rectangles are on 2 of the 4 large clearstory windows that are the primary sun entry for passive solar.  Now having learned how much heat is lost at night while playing collector one of the long term goals is to put insulated sliding shutters over them so picture the green rectangles eventually sliding up and down into the empty area below the window.  And the blue rectangle is a potential suction by solar thermal.  Will get to it last.

Starting next thread to keep the drawing with discussion 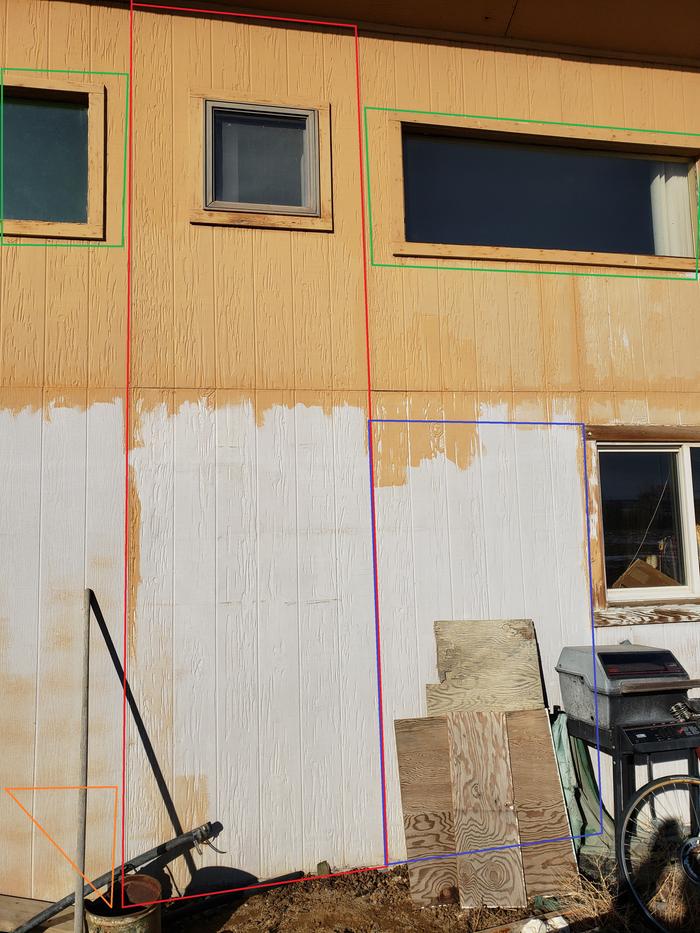 C. Letellier
pollinator
Posts: 468
Location: Greybull WY north central WY zone 4 bordering on 3
110
posted 1 year ago
So here is my thinking.  One of the things that concerned me about the main collector was possibly creating a moisture problem in the wall that it covered.  So that lead me to wanting an air gap here.  In the process I realized it might solve several problems.  If I put the air intake at the top and ran it down the wall behind the collector I get up into fresher drier air than I would have at the bottom.  I might get 15 feet of fall head pressure of my cold column to maybe increase static pressure and or flow.  By having the inlet screen facing sort of down it should be self cleaning.  So here is a drawing of my thinking.  I will have a bit of a constriction problem getting by the window but I think it can be solved with a trapezoidal bump out in the collector backing as it goes by the window..  So the thinking is take the air in 15 feet and let it fall clear to ground level.  Then go back up thru the heat exchanger gathering air from the basement to vent.  Then solar heat it.  If the collector was glazed with a double wall poly-carbonate greenhouse panel I would have roughly 4' x 14" of glazing for collector area which nearly doubles the area of the heating collector.  If I pull the air from the basement floor level and bring it out thru a heat exchanger horizontally and go in high at the inlet and go out low at the outlet.  So at zero outdoors I would potentially have nearly 60 degrees to give up to heat the incoming air.  Of course it won't do that much.  But even 10% is 6 degrees to immediately start lifting the air for convection.

Since the collector does roughly 120 cfm with a 50 degree temperature rise by doubling the collector size and taking the static air lift out of basement off I should be able to roughly either double the flow or double the lift.  If it was 40 below out and I wanted 70 degrees indoors that would mean a 110 degree rise needed to break even.  100 of it should be able to come from the collector and if I can get even 10 degrees from the heat exchanger I should have 120 cfm pushing into the house hot.  At warmer outdoor temps I should actually heat the house and not just break even.  The system should drive completely passively.  The air out of the basement is rising 8 ft while going from roughly say 50 to 60 degree to outdoor so that should drive the convective loop too.  Now there will be some losses too.  The air is turning 4 to 5 90 degree corners to get in the house.  Will that eat all the gains from the vertical column out outdoor temperature air?  Or maybe even eat more and come out with a net loss in volume for doing it?

Now in the photo the blue rectangle is where I might get a little more.  If I spill the exhaust air that is already still warmer out and heat it with another nearly 4 foot wide collector panel before exhasting it I could have another nearly 8 feet of rise sucking on the outlet.  Now this is completely passive but expensive.  I could put a fan and solar panel in cheaper.  But this should be maintaince free till the glazing needs replacement.  So food for thought.  Which is the better answer?  Fan and solar with replacement at say 20 years or polycarbonate with replacement at unknown age.

And that brings us to the final thing.  How to build the actual heat exchanger?  Currently I am thinking doing 3 or 4 long oval pipes by wrapping thing aluminum flashing in tall flat ovals.  If its volume is the equivalent of 1 foot thick by 3 foot high by 4 feet across that is 12 cubic feet.  So the outbound air would have just 6 seconds of exposure to the inbound air with the conductivity of thin aluminum in between.  If each oval blade was 24 square feet would  either 72 or 96 square feet of aluminum be enough?  Does someone have a better answer that is cheap and easy?
Collector.JPG 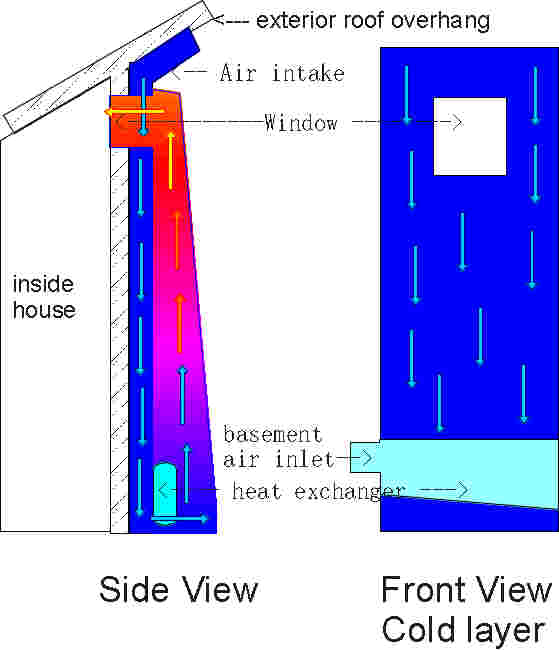