Seed starting for this years garden

posted 1 year ago
What is everyone starting for this years garden? Last year I started everything WAY TOO EARLY. This year I waited and am only not beginning to look at seed starting.

I'm going to have watermelon, cantaloupe, tomatoes and peppers grown the entire year in the greenhouse. This is a first for us and I'm REALLY excited about it. I'm just not sure otherwise. There are things I want to grow but a lot of them fail over and over. The root veggies will be fine but I don't need to start them early. Debating cabbage (bugs being the killing issue every year for that). I planted noodle beans last year straight into the ground and they didn't grow. So not sure if I should start them early or not. Lots to decide.

posted 1 year ago
good grief you are earlier than us I won't be sowing anything until March, I could sow onions in late Feb and peppers but I've decided it costs too much to keep the lights on so it's better to buy onion sets and skip the peppers they don't do well here anyway.

posted 1 year ago
I can't wait to get started ether.  My daughter bought me a plastic green house for my birthday, and I never got it up.  I will put it up this weekend and try starting some of my veggies and flowers in there to get an early start.  I will grow watermelon, cantaloupe, zucchini, yellow squash, tomatoes, peppers, and others.  I was very lucky I was at a store that sold seeds in late summer and I saw this man go by with a handful of seed packets, and he said "I was told these were free" and the clerk said yes.  So I went to check it out and they were removing them and said they have to throw them away, so they were going to just give them away, but some one posted it on social media and now they must throw them in the garbage.  The worker smiled at me and said it would probably take her a while to do it and I could take what I wanted.  I was going to be selective, because I didn't want to be a pig so to speak, but since they were going in the garbage and it was just 1 other lady and myself I grabbed a few handfuls.  So I have lots of seed.  I do plan on sharing with my family and friends, but it is cool I don't have to buy many seeds this year.
I was thinking I would see if there were any non profit community gardens in our area this year and make a suggestion to the company to donate the seeds to them.  I understand they can't sell out of date seeds, and also understand why they don't give them away, some one needs to buy the seeds next year, but to throw good seeds in the garbage when people are going hungry is an all to common crime in America.  I just wish these big store would think of stuff like that. Donating seeds and food you can't sell, but still good to non profit is a win win.  They get what they need and the company gets a tax write off and good PR.  Sorry didn't mean to jump on my soap box.
Can't wait to design my spring garden and get started.  I love to play in the dirt!

M. Phelps
Posts: 267
28
posted 1 year ago
it will be a while before i get veggies going for the spring
however i did start germinating a bunch of palm and banana seeds and some have started to sprout
some may take over a year to sprout... 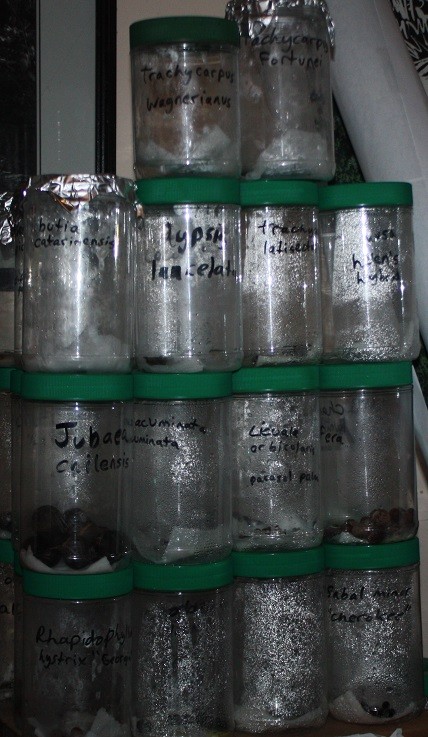