posted 2 years ago
You are probably most familiar with Ernie and Erica Wisner for their decade-plus of permaculture work, specializing in rocket mass heaters and related appropriate technology.  Ernie and Erica's workshops always start with introductions and fire science, to help build resilient communities.  This work has taken us to mountains and deserts, across borders and overseas, where we have had opportunities to work with many remarkable people.

Ernie Wisner's background and knowledge go much deeper in the maritime world.  On boats from infancy onward, Ernie's first 30+ year career was mostly on the seven seas: as a fisherman's kid, Navy ABE, ocean explorer, and unlimited-tonnage merchant marine seacaptain.  The "seven seas" are of course all connected; the whole thing is one system, a vast and massively changing one, and Ernie's family has sailed most of it since Noah was a babe.   They have records of Wisners in the maritime provinces before the arrival of the Mayflower; of a Wisner with letters of mark from King George; and the name Wisner (Veis-Neer) appears in the Viking sagas as well.
Ernie's personal career as a sailor started in childhood, first being dumped in a fishhold for a toddler playpen (a clean empty one, his dad's boat had two so he could take the toddlers along).  Ernie earned enough money working his dads' and other fishing boats to buy his own commercial salmon troller at age 14, and focused on small-volume, high-quality catch such as salmon trolling and sushi-grade tuna.  When he was old enough, he joined the Navy and served four years on aircraft carriers as an ABE.  Later, he returned to school for a Bachelor's degree in botany, specializing in bryology: bryophytes are nonvascular plants (such as algae, mosses, lichens, and liverworts - and almost all types of seaweed, a useful foundation for coastal ecology surveys).

Ernie was deeply interested in sustainable ecosystems management and traditional life ways, but most of his working career was based in conventional, modern industrial practices and professional training.  A moment of clarity in the early 1990s shook him up.  This was before polar swims were common; corporate morale-boosters could still argue to multi-generation Arctic sailors that there was some controversy about climate change warnings, and that producing what people need and want was more important than worrying about the consequences.  Then Ernie's exploration fleet navigated all the way north - to the pole - in open water, with no ice breakers.  Seeing the disturbing retreat of sea ice, and discussing what he saw with other longstanding Arctic families, Ernie realized that the Arctic was warming in unprecedented ways (at least, as far back as local knowledge could bear witness for the past 5000 to 10,000 years).  He started a lifelong quest to find work that wasn't self defeating, to protect his beloved waters if it meant fixing the whole landlubber mess to do it.

This commitment led to a series of conversations around the world, and recurring phone calls to the local natural building school in Ernie's hometown of Coquille, Oregon.  Expatriate Welshman Ianto Evans' work to revive earthen building for maritime climates, and to help people get off the treadmill of corporate wages and debt, seemed like another piece of the puzzle to Ernie.  Although at the time he was comparatively wealthy, he knew it wasn't likely to last.  He had watched fishermen work all their lives to pay for children and ex-wives they rarely saw, and end up retiring to a trailer on a patch of dirt they could barely afford.  He joined the Cob Cottage team in 2004, serving a two-year apprenticeship and service as cook and site caretaker.  During this time he and Kirk Mobert (Donkey) became fast friends while experimentally testing hundreds of troubleshooting prototypes for the expanded Rocket Mass Heaters book (Evans/Jackson).
The rocket stove work, and the relevance of natural building to sustaining coastal communities, seemed like an answer to his lifelong concerns.  Reduce carbon output, so that reefs and shellfish can thrive.  Help people to gain financial and physical independence, so they have more choice in their lifestyles, including spending less of their income on industrial fuels if they don't love being part of that problem.  Help off-grid homesteads thrive, so the homesteaders and gardeners can put down roots and develop that sense of caretaker connection with their patch of dirt.  Ernie's "ownership" is not specific to any one patch of soil - he is not a gardener or horticulturist, but can spend hours observing a single wood-ant nest, or decades as a caretaker and hunter-gatherer across the vast realms of sea, sky, and rainforest "reefs" of wild coastal greenery.  Our work with fire science has underlying goals of helping people to get to know not just symbolic vocabulary, but a working feel for the physics, fluid flows, and temperature gradients that drive massive weather systems and ocean currents, and the artfully balanced flows of heat and smoke in efficient masonry heaters and chimneys, and in efficient and well-ventilated homes.

I came along in 2006; we met in Portland, OR at the Village Building Convergence, a week that ended with Ernie suffering a devastating permanent injury in a car-vs-bystander collision.  As he watched his athletic and able-bodied careers vanish, we started rebuilding a path forward and he put his recovering energies into a teaching and mentoring role.  We taught our first workshop together that same year; worked well together.  Were married in 2008.  We spent a few years trying to combine boatbuilding, rocket mass heaters, and other types of workshops; but then with our move to the inland Okanogan Highlands, the rocket mass heaters became the main focus of our business for about seven years.  Working with regional and international teams such as Wheaton Labs, Regenerative Design Institute, Shikari Trackers' Guild, TrackersEARTH, Local Living Project, DreamSeeders, Uncle Mud, Straw Bale Studio, and many others, we helped build hundreds more prototypes, and dozens of full-scale installations.  We also collaborated with the Permies forums and other permaculture networks to contribute to digital resources, and served thousands of clients and collaborators with plans, consulting, and on-site project leadership.
As we had hoped, our own technical manual (The Rocket Mass Heater Builders' Guide, 2016 New Society Press) has helped thousands more people to succeed in building their own rocket mass heaters - sales have just passed 10,000 copies this year.  It means we don't need to be on the road as much, and when we do, we get to take our workshops and conversations to the next level and help with projects that continue to advance the development of appropriate uses and clean-burning alternatives for solid fueled heaters.

And it leaves us time to reflect on our original priorities: a livelihood compatible with life on earth.  Sometimes we follow the science - doing more to support climate change mitigation, coastal disaster relief, or public information.  But on our best days, we leave the rationalizing arguments to others, and explore ways to actively participate in and support healthy culture: local knowledge, livelihoods with deep roots and a long memory for sustainable, adaptable traditional skills, deeply connected to the living world.

We have been working our way back toward Ernie's maritime roots these past couple of years, because life is short, and his bucket list includes prototyping permaculture guilds for sea vegetable gardening, working with (and eating a lot of) sustainable seafood, and passing along nautical traditions and lore that he received as other sailors' living legacies.   As I've shopped and cooked with this sea-bear, I've come to describe him as basically an Arctic marine mammal, and he's been housed in inland zoos for a long time now.  It's time to return him to his natural habitat.

We'll be posting more about that here, and on Ernie's Facebook and our websites, in the coming weeks and months.  We appreciate everything that the Permies community has done to support our efforts thus far, and hope you'll enjoy the "Coastal Repatriation" phase.

For now, here are a series of images to share Ernie's work, and some links to support it in various ways. 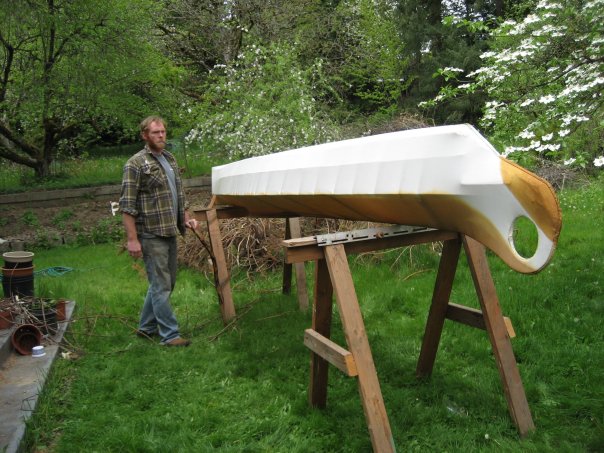 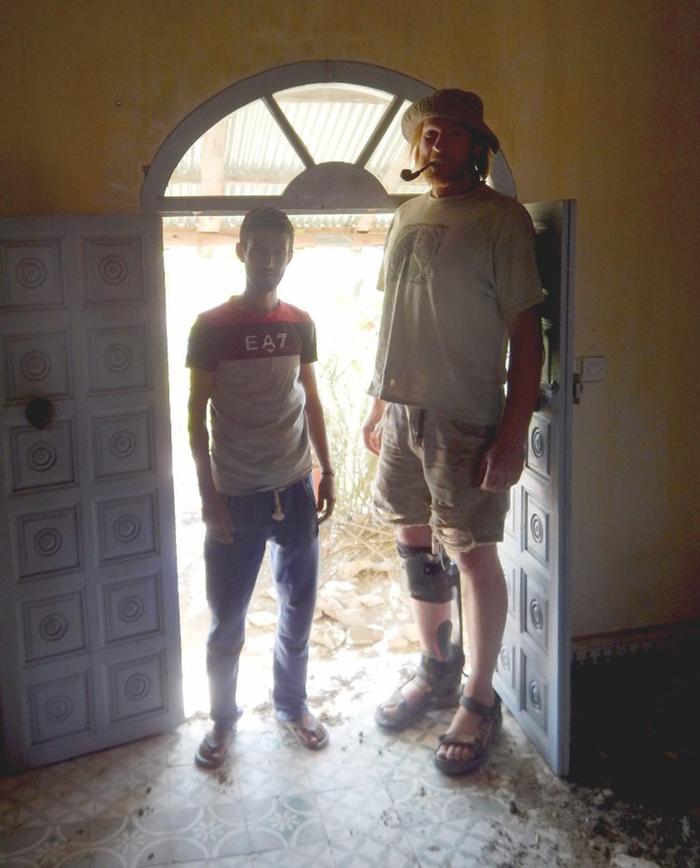 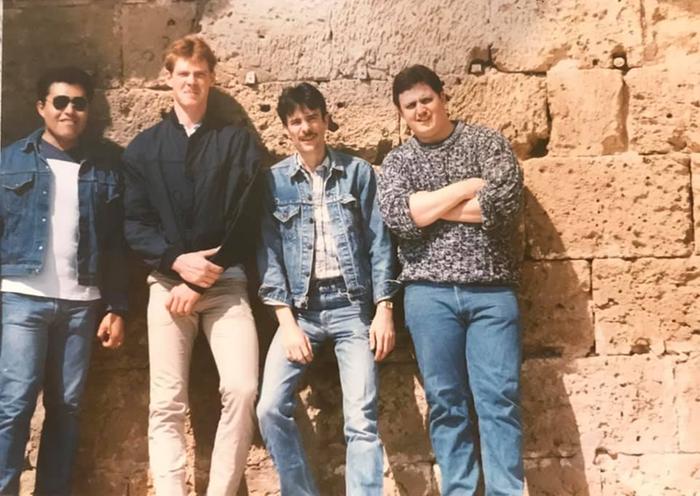 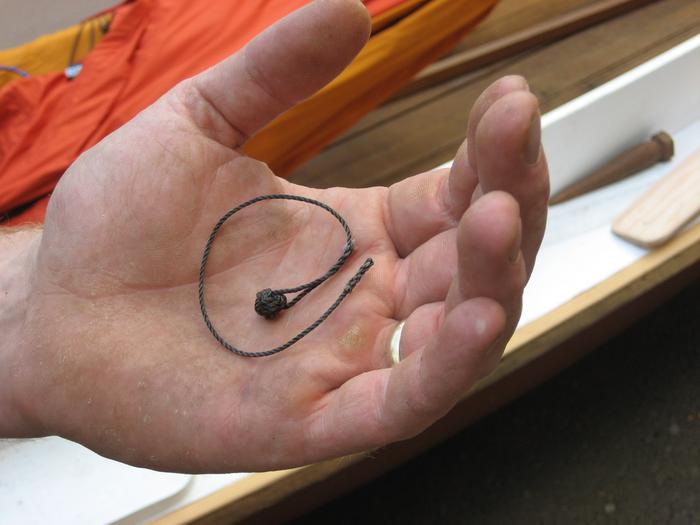 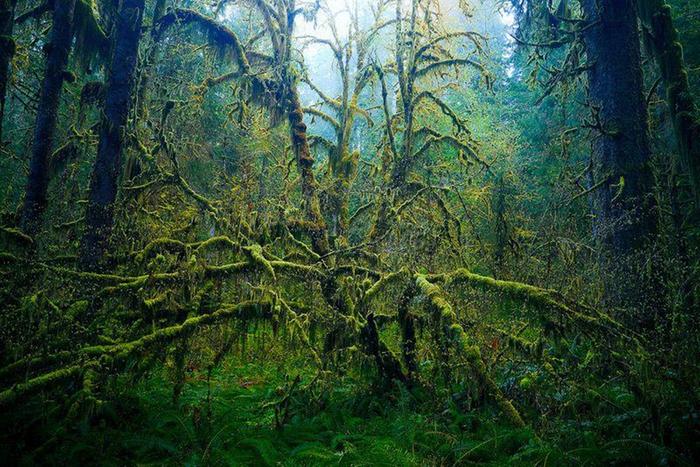 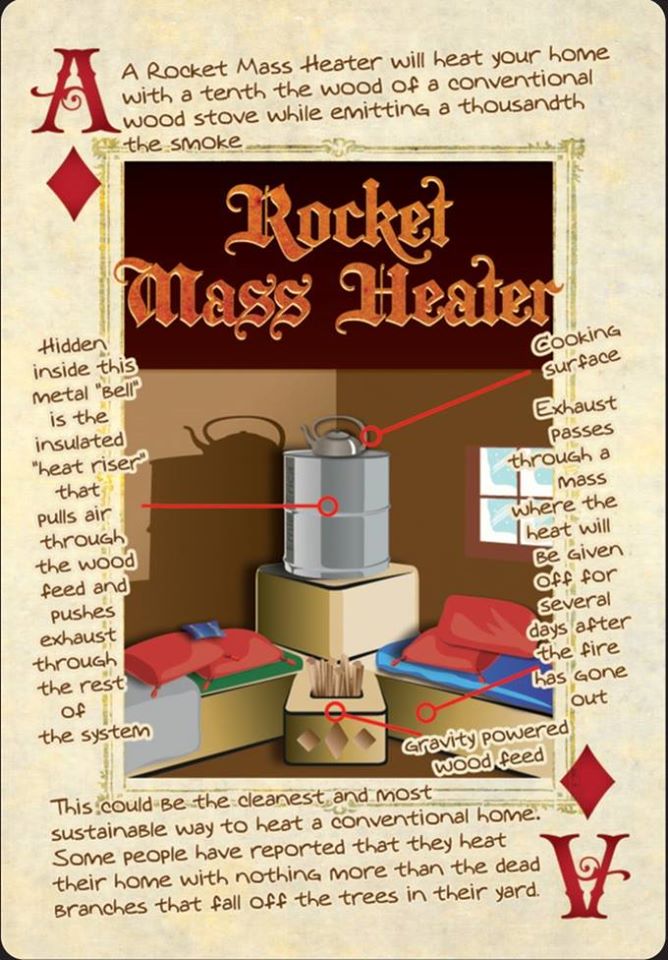 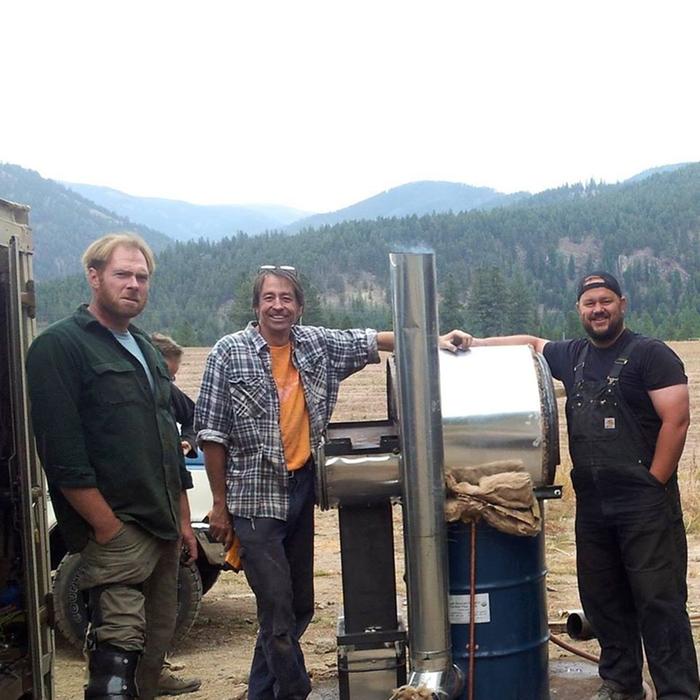 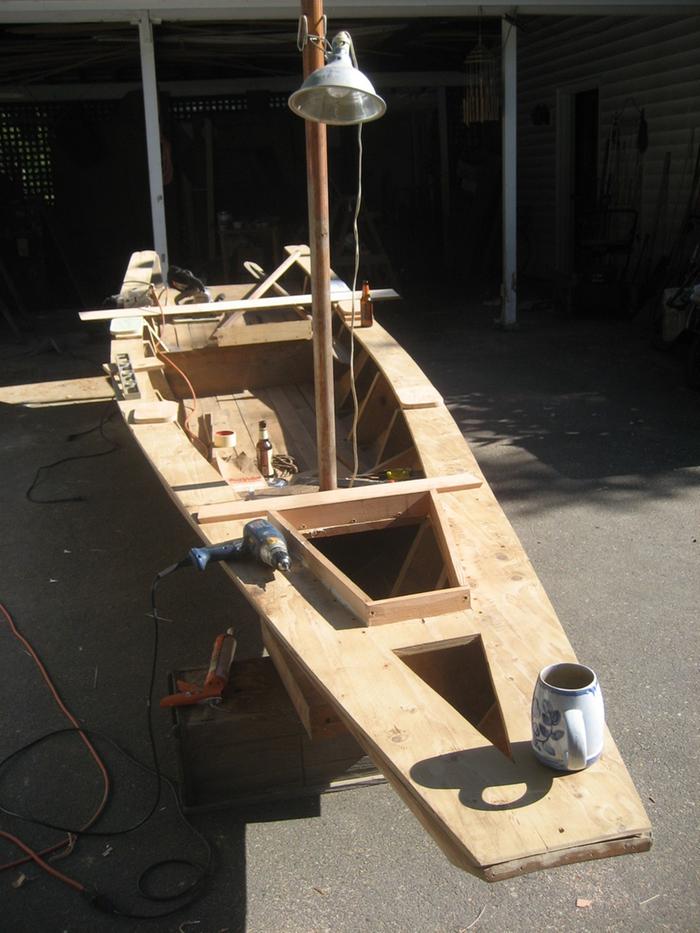 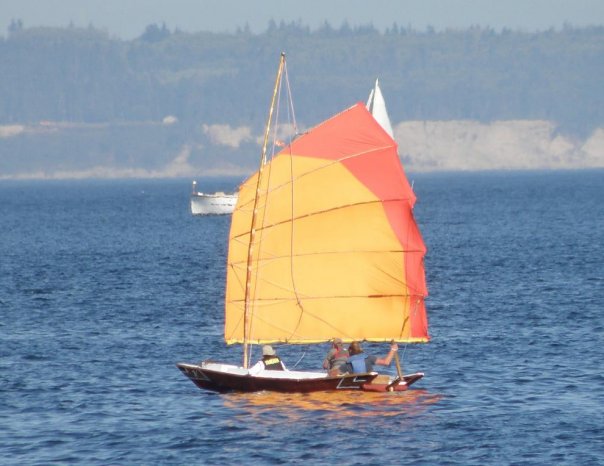 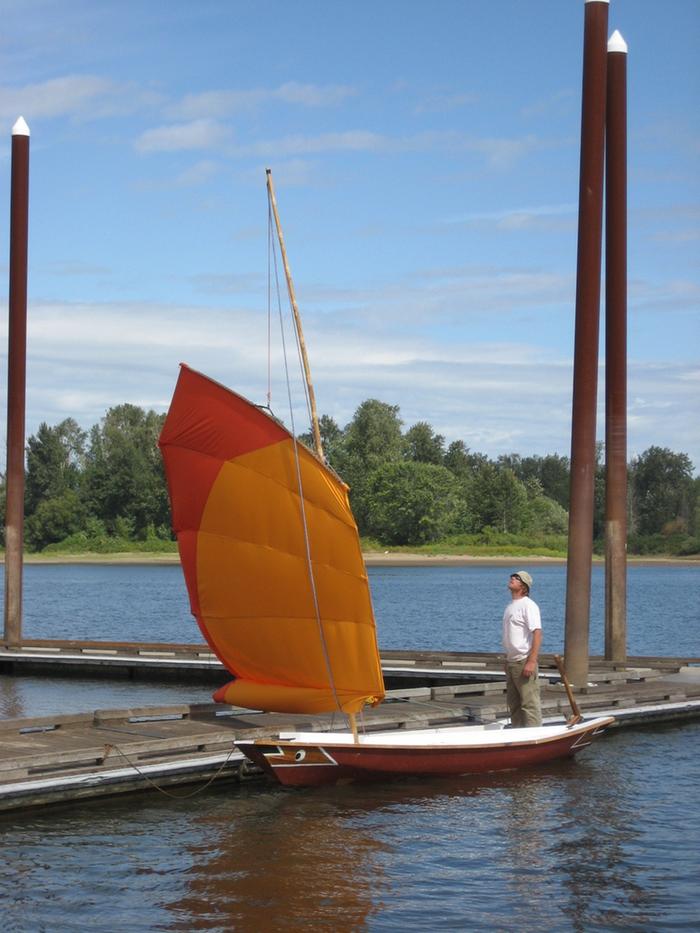 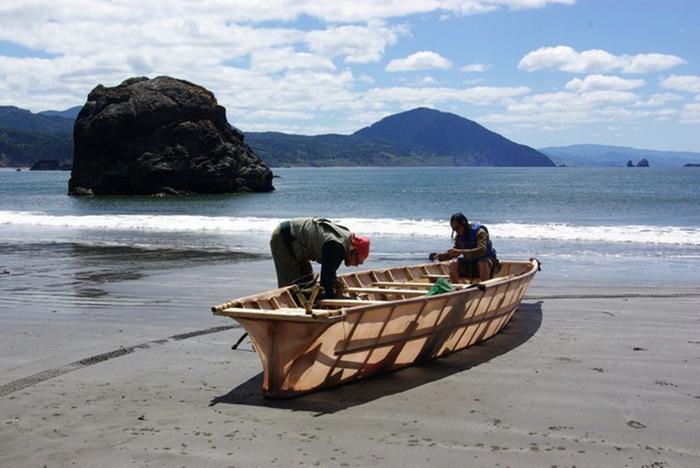 posted 2 years ago
Thanks for sharing Erica.  Ernie (and you) have done so much that its hard to grok it all.  I hope the move back to the coast is going well and that you and the sea bear are settling in.  I look forward to whatever lessons this next phase produces.