Posts: 24
posted 12 years ago
Am thinking of the utility of making a concrete block structure (rebar reinforcement) single skin with an outer skin of straw bale, all on top of a concrete pad. This way I get the benefits of the straw insulation with concrete as thermal mass on the right side of the insulation plus a nice and strong wall to hold a sod roof.

Thomas
SC
Leah Sattler
Posts: 2603
55
posted 12 years ago
you would definitly have to have some moisture barrier between the block and straw or i would think you would have condensation problems, but I think it could be made to work.

Posts: 24
posted 12 years ago
Water penetration problems. Presumably this would be solved in the same way that strawbale construction handles this problem (low and generous eave overhangs and masonry foundation).

Would a damp proof layer be compatible with straw bale? or is it necessary to let the material "breath" to prevent decomposition.

Hunting around on cob on the web, I found references to light straw-clay. This sounds interesting to me as my land has plenty of clay but little sand. What do you think of building up the concrete block then slip forming (one side needs the form now as the other side is concrete block) up the outer clay/straw?

I am not sure how troublesome the shrinkage would be. Presumably ties to the concrete block might create enough sheer stress on the shrinking clay/straw to induce cracking. The corners of the structure might be a nightmare necessitating a circular construction.

posted 12 years ago
Having lots of mass on the inside and insulation on the outside seems damn smart.

(and, yes, I know that the word "but" negates everything you just said - but it works here!

Concrete?  Gak!  Even a utility shed out of concrete seems lame.  And while concrete is pretty cheap, apparently it's eco footprint is pretty damn nasty.  And not exactly working with the environment.

And now for the straw bales bashing segment of this post ....

If you are gonna travel this path, I wonder if you might be able to do something very layered.  Maybe ferro cement with a layer of straw and then a layer of plastic and then a thick layer of soil.  If the straw decomposes or gets squished so flat that it does nothing for insulation - oh well.  You tried.

But even still .... that is starting to sound a lot like an Oehler structure.  And wouldn't an Oehler be easier, cheaper and look way better on the inside?

Rob Alexander
Posts: 53
Location: Furano, Japan
2
posted 12 years ago
Have you considered using rice husks for your insulation?
(Obviously being near a rice producing area is going to influence this.)
You would use it as an infill (or in sacks stacked like bricks and then render).
As opposed to strawbales, rice husks are not sensitive to moisture and rarely rot, they're fire-resistant, free, and millions of tonnes of it is wasted each year.
..but if you're nowhere near a rice field..

Susan Monroe
Posts: 1093
Location: Western WA
8
posted 12 years ago
"...concrete block structure (rebar reinforcement) single skin with an outer skin of straw bale, all on top of a concrete pad. This way I get the benefits of the straw insulation with concrete as thermal mass on the right side of the insulation plus a nice and strong wall to hold a sod roof."

It sounds like overkill to me.  I don't think the thermal mass will be of much use unless sunlight hits it and is absorbed.  In the shade, wouldn't it always be cold in winter? What would be heating it up?

What part of the country are you in? California?  Minnesota?

Do you really want a sod roof?  I had always heard they are high-maintenance and they leak.

Sue
Posts: 24
posted 12 years ago
The shelter would be south facing, glazing on south face. This thermal load would require concrete on the interior. I am taking permaculture principles to heart, wanting to make the system as self regulating as possible.

I know a lot of energy goes into making portland cement, but it only has to be done once. The same could be said of pozzolana, but, hey, it outlasted the Roman Empire.

The insulation is a little trickier. Hence my query about use of straw bale as insulation material. The conventional material would be glasswool or polyurethane foam. Since this would have no structural strength I would have to go and build some sort of frame to support the glass wool and water proof siding, and how enduring would that structure be?

Now....straw bale, on the other hand, may deteriorate over time, but could be replaced without too much energy expenditure.

I do like the idea of using light straw/clay. These materials could be obtained locally. It has been mentioned that moisture may be a problem. I think this can only be solved by generous overhangs on the eaves and placing the straw on a concrete base. I am going to have to check this part of the design does not interfere with the passive solar requirementon the south face. I am quite far south (Virginia/NC border) so an over hang will be needed anyway.

Thanks for all the thoughts, keep em coming!

Thomas,
NC
Rob Alexander
Posts: 53
Location: Furano, Japan
2
posted 12 years ago
Is the concrete going to be supporting load?
If not, building codes get more relaxed and concrete isn't the only thermal mass on the block.
Dark colored floor as thermal mass?
How about a tamped earth floor then?
http://www.grisb.org/publications/pub11.htm
http://www.dancingrabbit.org/newsletter/Newsletter0701-floors.php
Hope it helps.

1. In California at Emerald Earth I saw quite a few hybrid cob/strawbale structures that were working well. They basically had the N, E, & W walls made of strawbale and the south wall made of cob. This makes a lot of sense since you want your thermal mass on the side where the sun shines. If you plan to have a lot of south facing windows then you could put cob above below and between them as well as using a dark colored concrete floor an/or a trom wall to absorb heat behind. Either way, it seems to me that there isn't much point to having thermal mass on the north wall (unless you wanted to heat it hydronically or something).

2. Here on Orcas Island, WA we had a cabin built from old warehouse floor decking from Seattle. Insulationwise, we basically had 4 inches of wood. It got a bit chilly and didn't hold the heat well. To increase our insulation we threw a 2x4 stick frame up on the outside of the building and did light clay straw with a earth plaster finish. It has performed wonderfully. It is holding heat much better. We've even been so bad as to neglect getting back to the final lime plaster for water protection, but it hasn't been damaged in 3 years since the eaves are adequate.  Basically, unless it gets really cold in NC in the winter, I would evaluate how much insulation you actually need. The light clay straw went up really quickly & was a pleasure to work with. I've included a picture below. 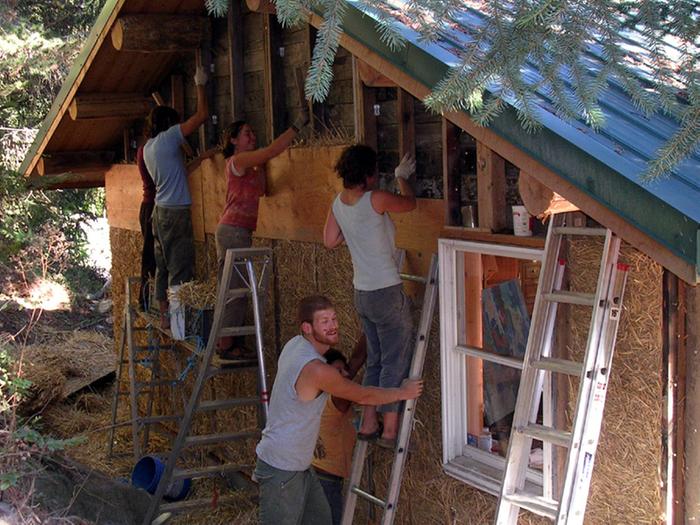