bruce Fine
Posts: 818
24
posted 1 month ago
my well water is less than perfect and have been exploring water filter choices. there are so many options I'm suffering from information overload. I don't like the necessary evil of plastic, so one thing that is important to me is getting a filter housing that is stainless steel. the next thing is just what filter cartridges that are organic as well as efficient and long lasting. many housings that I see advertised are not for a universal filter design but are specific to a brand design. best would be a universal filter design. it would probably be best to have at least 2 filter housings. the first with spun cotton or paper filter to get out the solids the next an anti bacterial or carbon block design to polish the water. ive had nothing but bad expensive experiences with under counter RO units and since there is no salt in the water its not necessary for the water in my well.
I only want to do this once and don't have money to waste.
John C Daley
pollinator
Posts: 1383
Location: Bendigo , Australia
88
I like...

posted 1 month ago
If you have suspended solids in the water, the best thing is a large water tank, at least 10,000L to allow time for settlement to occur.
Then use a pressure pump to move the water to the house.
You may not need a filter after that.

posted 1 month ago
What do you all think of this product.
https://napleswaterfilter.com/products.html

Sounds like you're mostly dealing with some sediment stuff?  A cloth filter and charcoal will indeed address the issue.

And yeah, plastic is a problem.  They are almost all plastic.  But then, at least for me, so are the pipes from the well and in the house, if not in the well itself.  I was intrigued and sniffed around again and found that Harmsco makes big stainless filter bodies for pools and such but - and I'll cover this in a second - require cartridges.  I'm sure they could be "improved" with a hacksaw to deal with buk carbon in some form, but that seems extreme.  Maybe look on ebay ... I saw many Harmsco filters there.  Penguin filters, a division of giant PentAir, looks like they sell a stainless filter body but its just "wrapped" in stainless.  : (

The thing that bothers me about all of the systems I found is the filter element.  I understand that using highly artificial and engineered components makes it possible to produce an engineered product  that will filter 1 micron, or 10 microns, or whatever your need.  But I don't like the disposable nature of them, the proprietary design of some, etc.  I used to have a lot of fish tanks and the filters were so simple - a cannister with baskets in it that the water flowed through. Details varied, but generally there was a layer that encouraged mechanical separation, a layer that captured stuff still in the water, and a carbon layer to pull dissolved things out.  I'd really like to have that in a home, whole-house filter.  I could use fancy fiber in it, or compacted wool or cotton.  I could make my own carbon and use it too.

I once spec'd out a modified water softener system as a whole house filter.  I was going to pack the tank with carbon, nothing else.  Figured it would probably be good for two years.  I don't have those specs or a source anymore...  The thing I never figured out an elegant solution to was how to filter the house water without needlessly filtering hose bib water.

The solution S Benji posted looks neat ... probably overkill ... but the company provides no details on how to change out the filter medium when the time comes.  I fear they probably just toss the whole assembly and, in the name of "service", provide you with a new pre-assembled unit (and a big bill).

posted 1 month ago
S Benji's offer may be cleaned with a backwash, similar to some pool filters.
After all the disruption with the back flow of water, the larger particles settle to the bottom and the fines at the top.
Very clever stuff.
Irrigators use filters with discs that have small groves, the groovess come in different sizes to suit what you are trying to keep out,
they are cleaned simply by pulling them out and washing them.

It might be that you only need the Ozone Disinfection, with the contact tank that settles the particulates, such a setup would simply things 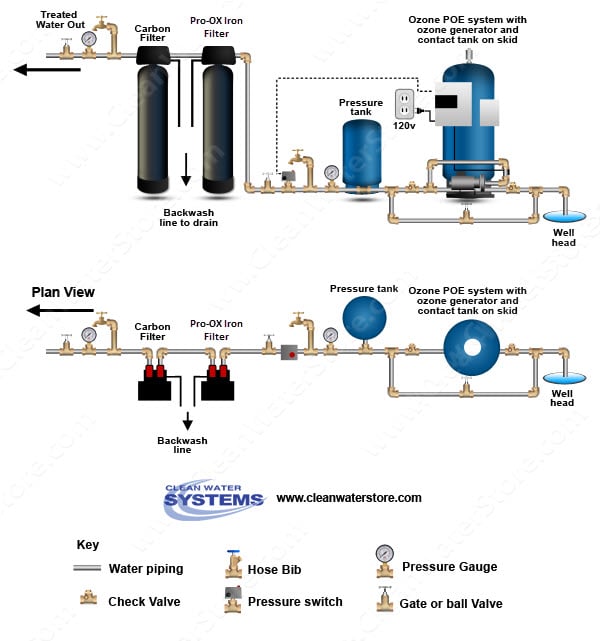 Eliot Mason
pollinator
Posts: 279
Location: Beavercreek, OR
67
I like...

posted 1 month ago
Bruce, I feel like we're not moving in a helpful direction here.  Could you please tell us more about the "less than perfect" well water and your intended use?  Is there a particular contaminant that you need gone? On re-read of your original post I can't tell if you're looking for a solution at the kitchen sink (or kitchen counter?) or the whole house.
S Bengi
pollinator
Posts: 3113
Location: Massachusetts, Zone:6/7, AHS:4, Rainfall:48in even Soil:SandyLoam pH6 Flat
318
I like...

bruce Fine
Posts: 818
24
posted 1 month ago
I really like what Naples water filter has put together, I'm not so sur they are in business anymore. they don't respond and don't answer phone. it seems they worked on a model as culligan does with water softeners you pay by the month and they service unit on a regular basis.
I'm not sure what's in the water. right now its clear but once the rains start it gets muddy. I know there is way too much calcium in it. when I use it in stainless  tea pot in month or two there is considerable calcium build up in pot and I have to soak build up with vinegar at least twice before its clean.
I remember one time after heavy rains for a week there was so much clay in it there was 1/8" build up in bath tub in just running water till the hot water came out. that only happened once. but much of year its cloudy or brown.
water is used for everything but drinking cold right now.
I suspect that there is bacteria in it that has caused me problems so I no longer drink it unless boiled first.
I need to have it tested but not by county or state. don't want it on record if it comes up contaminated.
my neighbor next to me about 3000' away had 180' well drilled and they pay about $1000 year for filtration not sure what's in it but its not drinkable without elaborate filtration.
across the street they had well drilled, not sure how deep, and they have a natural artesian that flows by itself, with excellent water that needs no filtration or softening.
my first plan of action is to get a sample to a lab and find out what's in it now that I'm motivated to get it figured out.
bruce Fine
Posts: 818
24
posted 1 month ago
I gotta say thought. its far superior to well water in my previous Florida house. that water was poisonous and so much salt in it faucets would last at the most 2 years and the sulphur was really nasty.
its nice just to have fresh water after living with that
Eliot Mason
pollinator
Posts: 279
Location: Beavercreek, OR
67
I like...

posted 1 month ago
Bruce:  Wow, that's much further down the water scale than "less than perfect"!  What you had before must have been non-potable!

Calcium - removing that requires a water softener.  They're a pain and I always hated dealing with the water softening vendors, but keeping calcium out of the pipes makes everything else work better.

Sediment - some sort of mechanical filter, either one that can be backflushed (per John) or a filter media that captures the sediment and is occasionally changed.  You've got options here, but the critical thing is that removing sediment is essential to making downstream elements work well.  I recently had the (dis)pleasure of rehabilitating a mobile home that had been on a bad well - many of the pipes were completely clogged with clay sediment and water pressure couldn't force out the plug and I had to replace the pipes. Not fun. Also, had to clean the tub and shower with a brillo pad attached to a random-orbit sander.  The electric water heater's lower element seemed to be in a layer of mud ... took forever to flush it out.

Bacterial & ??? - yeah, get a test here.  Getting a true anti-bacterial system (such as an Ozone or UV system, as S. Benji has pointed out) is a significant bump in the cost of the system so better to know what you actually need.  Its also possible that there are other contaminants and those require a totally different approach (carbon, absorbing resin, R.O. membrane) and wouldn't be affected by UV or ozone.

And finally ... it might be worth exploring a new well.  If you could some how find that artesian water table your neighbor enjoys ... might be better to spend $ there than $1000/yr on filtration.

p.s. your experience with H20 in FL explains why so many of the water softener & RO companies seem to be based in FL...
John F Dean
gardener

It is not clear to me what you mean by "less than perfect" in your original post. Has your water been tested?  What were the results?

Robert Clark
Posts: 1
posted 1 week ago
Now I’ve only had Fleck softener in operation for a couple of months. But so far it has been working perfectly. I did have to call the seller during installation with a question about water being retained in the salt tank (my previous softener was a Sears and it never had standing water in the salt tank like this one does. The person I talked to was extremely helpful as well as pleasant to talk to. He also walked me through the program cycles (his help was actually more helpful than the YouTube video I watched). Our water is moderately hard. This softener might have been a little overkill, but I prefer that to struggling with equipment that can hardly keep up. Fleck softener