David Livingston
pollinator
Posts: 4328
Location: Anjou ,France
245
posted 6 years ago
I am impressed . How is the performance ? I would like to buy one

Does the hot water still work ?
What is the estimated power output ?

Posts: 3443
Location: Southern alps, on the French side of the french /italian border 5000ft elevation
175
posted 6 years ago
Hi Erika and David.


Performance Wise, t's rather similar to an original range, as for the cooktop. May be a smidge underpowered, as a standalone with a stubbey chimney. But with the 11m of chimney i have now, it' a monster. I love itn from boiling to simmering, everything is doable. But the oven is shit! I've transformed it into a bell, and filled it with firebricks. As well as the tray space bellow. It needs bricks piled up all around to accumulate the heat. And would be best followed by a bell. Also, treating the whole innards as a bell oven could be done too. Cutting the original oven, and tray storage, building a brick bell lining all around the Inside walls. Using this as an accumulating oven. That could be done too. Or else, use the firebox as an accumulating oven, as per this latest thread.


And a nice range make, is this one.

I don't know how the side door batch would work as an oven, but this could be possible.

David. The one i have used is a "Coste" , cheapish steel construction, which is pretty easy to cut through. for implementing the different parts.

With Vortex and Patamos, we've discussed the subject too.


Where i was sugesting a Broken riser, as per Matthewwalker's invention. Which would go to the front and side. The top part of the riser is slanted instead of straight. This could help with longer burning time, so less soot. Better burning and mixing.

If you end up buying one on leboncoin, i'll try to "see" what is possible and help you from affar. I live in the alps, and never go to your side of France.

Erika, i haven't goten round to find a testo sniffer to test it!

Posts: 3443
Location: Southern alps, on the French side of the french /italian border 5000ft elevation
175
posted 6 years ago
By the way, i'm planning to find another bigger one, to try some of thoses latest refinements

posted 5 years ago
This thing is awesome! Great concept idea

I'm curious, What materials did you use for the burn box and riser? Are they custom made/cast or store bought?

I'm curious, What materials did you use for the burn box and riser? Are they custom made/cast or store bought?

Store bought. There's two makers which were doing that sort of stuff in Italy.

Landini and Tona. Landini seems to have discontinued their range.

In the US, i can't remember who did any of this kind of stuff. There was a thread at donkey's, stating the potential suppliers. For round, you can always turn to schiedel. And for anything square, use bricks and pizza slabs. Or check foundry supplies.

As for the outcome of this one. Warms the place madly, but it's a pain in the ass to load/refill. Primary air isn't big enough. Primary heat extraction is real big, as is the stir fry possibilities when hot. Barely any storage of heat at all. But plenty of leftover heat to recover further. Oven was crap. Filled it with bricks.

If you're into ranges

Not pure rocket. But they seem to work. And you could do a proper rocket with that look too.

posted 5 years ago
So the burn box and riser are made of ceramic or fired clay I'm guessing? What exactly is schiedel? I'm located in Canada

John McDoodle wrote:So the burn box and riser are made of ceramic or fired clay I'm guessing? What exactly is schiedel? I'm located in Canada

Well, it's fired clay with grog in there. May be a lesser proportion than a firebrick tho. Schiedel is a german brand.

Carefull, thoses crack with heat. Once or twice. And then move around as needed when the stresses are taken out.

You'll have to do a bit of research

F Styles
Posts: 455
Location: climate zone 6b
3
posted 5 years ago
Satmax this is very interesting build. what temps do you get inside the oven? why do you think you are not getting the temps in the oven do you think its the door seal?

i know that in my system i got a 50 F to 75 F temp increase in my oven by tightening my door and seal. what i did was modified the oven cleaning lock to lock the door tighter on my oven door and made sure the oven seal was making good contact.

leaving my oven inline does decrease the heat through the mass bench so i am thinking of designing a partial 50 gal barrel modified to fit on the top of my bell with insulation lining it and being able to bake inside that instead. i just wont be able to cook on top and bake at the same time like i can now.

Posts: 3443
Location: Southern alps, on the French side of the french /italian border 5000ft elevation
175
posted 5 years ago
F Styles. I didn't even measure the temps of the oven. I can't cook anything in there before 2 or 3 hours of running. Originaly, this was a coal range. And the oven would be in direct contact with the firebox, which is not the case anymore. And the movement of the gases around the oven isn't enough to warm it up to cooking temps fast enough to be of any use. I would bake in the flat, before i could bake in the oven. Now, the bottom plate of the oven has been removed, and there's firebricks sitting on a grid, with some air space between them. And they're still warm the next morning.

F Styles
Posts: 455
Location: climate zone 6b
3
posted 5 years ago
if you think you could use the oven as a bell to cook in, do you think its possible seal it enough around the door to create sufficient draw for the RMS to heat to cook with?

i have two wood cook stoves and this interests me in a way i need to do enough research to build one to bake with and heat with.

posted 5 years ago
I have an early 1900s shacklock Orion coal range nz built legendary ovens. I want to fit something similar to it. The oven in mine relies on flue gasses to heat rather than direct heat from the fire box. Do we think this should work to make the oven hot. Also it has a huge cast iron heat exchanger ( 25kg of cast iron) to heat water. I was thinking 4 to 6 inch batch box heat exchanger mounted just below the top or riser to heat water for some radiators throughout the house(4 of them) then past the oven. The oven is all cast walls except the rear wall that's going to be 6 mm plate. Then pass the gasses through a short section of flue in a bench to heat a seating area for our dining table. The installation document states minimum flue size of 6" but 7" is optimal, but I probably won't be using the original flue outlet I'll be passing the gasses out the bottom right-hand side just below the oven there is 3 inch clearance all the way round the oven I think I'll have to make the flue exit a rectangular to round connector has anyone done this before if not does anyone have any hints or tips to keep it flowing right.
DSC_0038.JPG 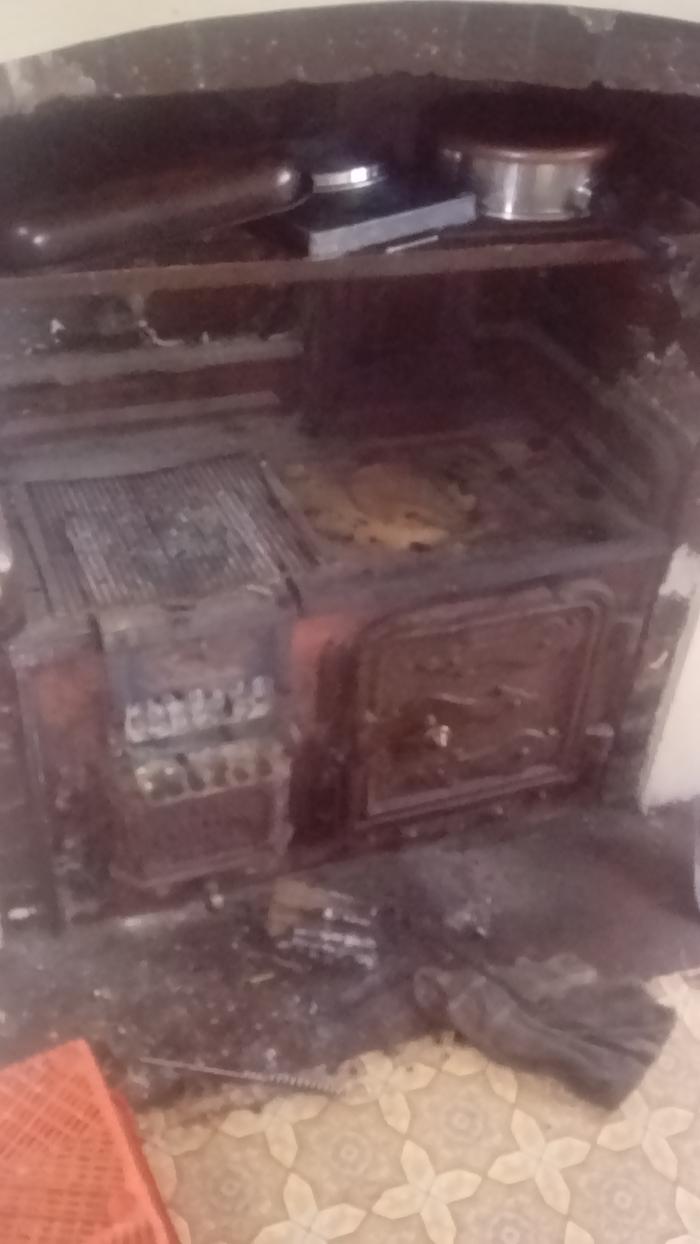 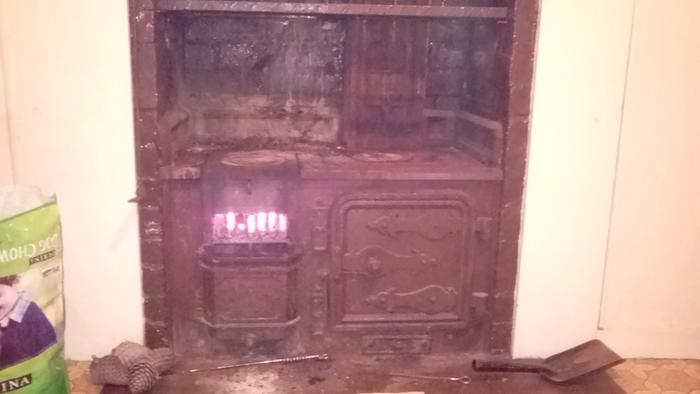 Posts: 3443
Location: Southern alps, on the French side of the french /italian border 5000ft elevation
175
posted 5 years ago
Russel, i don't know about your range. Never seen one of those.

The first thing i want to warn you about, the feeding is a pain on my range retrofit. I'm working on two solutions; but since i have tons to do. It's not progressing at all for the moment.

The size of the firebox is limited, to to the riser's height. Which obviously can't extend past the cast iron. Except if you make the oven above, and exit in the oven. That's one of the solitions i'm envisioning. Bleck or white oven in a brick bell next to the range, the flue gases hit the oven first, then pass under the cast iron cooking plate. Mind you, this is not verry good for frying.

Next solution, using the cast iron plate as the top of the firebox. Good for frying. Then it goes into the oven, and passes back under the other part of the cast iron cooking top for slow cooking. Then can heat a bell or a bench. But that's another part.

Another solution i have envisioned, with Indipendenteenergy, the vertical batch. Where the batch rocket is transformed again, into a J, but with a bigger feed tube, and a port, to add turbulence. With a top obviously. I don't know if a feed tube cast iron top would do for cooking. Check my workshop heater, for the batch box cast iron top plate. One detail, if using the vertical batch arangement, cross air feed should still be used.

The top plate dropped once or twice. With seemingly no ill effect. No smoke into the room. So i think it's possible to raise it to feed the stove.

Another thing which could be your solution, matthewwalker's riserless cores. Unknown territory for me so far.

One thing, i think it's always better to scrap the range, and just keep the important parts. Like doors, cast iron top etc. And build from bricks. Another thing. Carefull, they're soo ^powerfull, that they can overhgeat your house.

posted 5 years ago
I have 1.2 m of height to play with in the original firebox and ash pit on the left of the unit. When you look at the pictures the oven door is in the right the little rectangular panels around beside and below the oven are ash clean outs these are in the flue gas path around the oven
Satamax Antone
gardener

Russell Dinning wrote:I have 1.2 m of height to play with in the original firebox and ash pit on the left of the unit. When you look at the pictures the oven door is in the right the little rectangular panels around beside and below the oven are ash clean outs these are in the flue gas path around the oven

Remember, it's no fun to kneel to feed the stove. On the range retrofit, even stacked on four bricks, the top of the firebox is at 40cm from the floor or so. Besides of that, off you go, get started!

posted 5 years ago
Cheers for the advice I'm going to lift the base of the stove off the floor on a brick foundation somewhere between 200 and 300 mm so that should make loading easier but I do like matt's riserless core too might see if I have the room to shoehorn that in there.