John Young
Posts: 80
17
posted 1 week ago
Background: I have about seven acres on a hill, mostly sloped, and the only nut trees existing on the property are oaks (mostly chestnut oaks) and some hickories.

So I had ordered 25 native sweet pecan seedlings from the TN state nursery earlier for $50, which arrived recently. I guess I had assumed that the seedlings would have been grown from seed, but what I received was actually 26 rooted cuttings. I guess for the price I can’t complain, but it certainly wasn’t what I was expecting. I also had no guarantee that these cuttings (genetic clones) were not all from the same tree, which would be bad to not have two types for pollination, and I didn’t want to wait 10+ years to figure that out.

I decided to order two pecan trees that were from named varieties to ensure that I had at least one type 1 and type 2 tree on the property, however after doing some searching I found that because of the available discounts and free shipping at certain order amounts I could actually order 10 for about $110 versus paying about $45 for two, thus I ordered 5 Elliot and 5 Creek. I picked these mainly for their disease resistance. In hindsight I probably should have ordered four different cultivars, two of each type for additional diversity, but that is water under the bridge now. I expect the new trees in a week or two.

I had been working on clearing out a spot (mainly overgrown remnants of an old pasture field) to repurpose into a pecan “orchard” but I was too disenamored with the current rooted cuttings to plant them in that cleared and prepared real estate. I plan to plant all the named cultivars there on an approximate 40’x50’ spacing. Note this lot is moderately sloped to the south, which I think will help reduce shading in the 40’ north-south dimension. I am not trying to maximize yield, just want them healthy and not overcrowded. At those large spacings I still probably can’t get all 10 of them in the space available, so I will have to plant them closer or find other homes for the ones left. I am very open for suggestions on this topic.

After some consideration of what to do with the 26 rooted cuttings I received from the state, I ended up interplanting them in a section of woods sloped to the west that had a handful of large oak trees but quite a bit of secondary growth from spaces left by many dead pines. I put those trees on very roughly 30x30 spacings, some closer and some further as I was trying to space them around existing trees. I will thin out some of the closest secondary growth to allow them a bit more light, but they are going to have to largely fight for themselves in the existing forest, I am not clearing any large areas.

I figure the trees in the woods will do whatever they do, I am not expecting to harvest a meaningful crop from this area since I will have the more formal orchard spot to focus on harvesting. Anyway attached is a picture of the 26 rooted cuttings soaking in a bucket before they were planted in the ground. 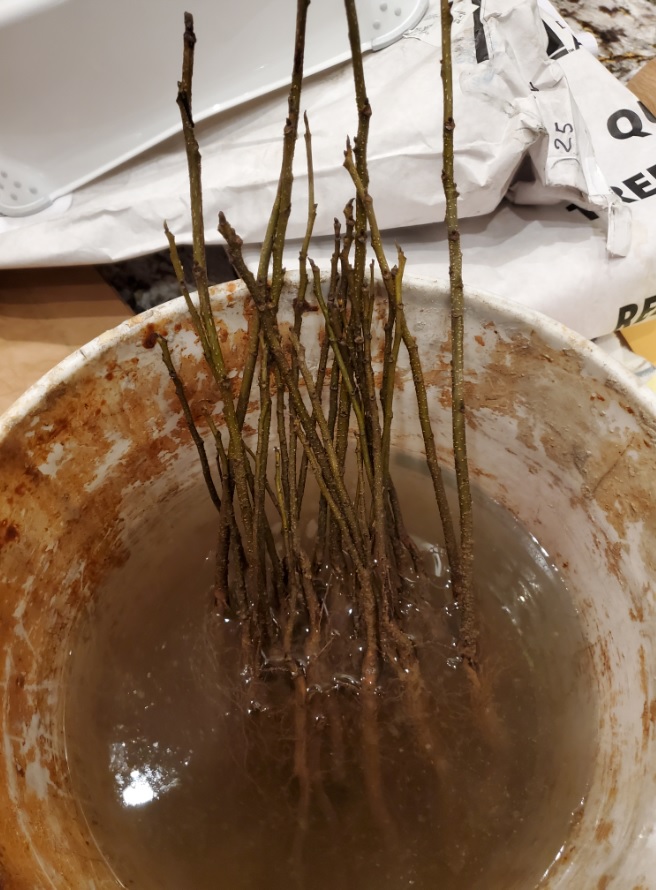 posted 1 week ago
Good luck! I've planted a few pecans myself, nowhere near as many as you. I wish you luck on your orchard!

Where did you order your Elliots from?
John Young
Posts: 80
17
posted 1 week ago
Jamin,

Thanks, I can’t really say I intended to have so many pecan trees, but it is what it is at this point. I ordered the Elliots and Creeks from www.plantmegreen.com, they seemed to have good prices, a decent variety, and lots of information. That said there are lots and lots of places selling trees.

John Young
Posts: 80
17
posted 1 week ago
The other nut tree I am working on propagating are Chinese chestnuts. I liberated them out of the road under a mature tree this past fall. I chilled them in the fridge for 90+ days in a hummus/soil mixture, and then planted them in plastic containers. I put the containers on a display stand a friend saved for me from his work, which set in my windowsill nicely. I have seven seeds, which I have planted between six containers.

The chestnuts promptly sent out root shoots, which came out the top and turned down. About a week and a half later they have started sending up sprout shoots.  I have a flat-ish spot picked out to transplant them into come spring, as I know they will outgrow these containers rapidly. 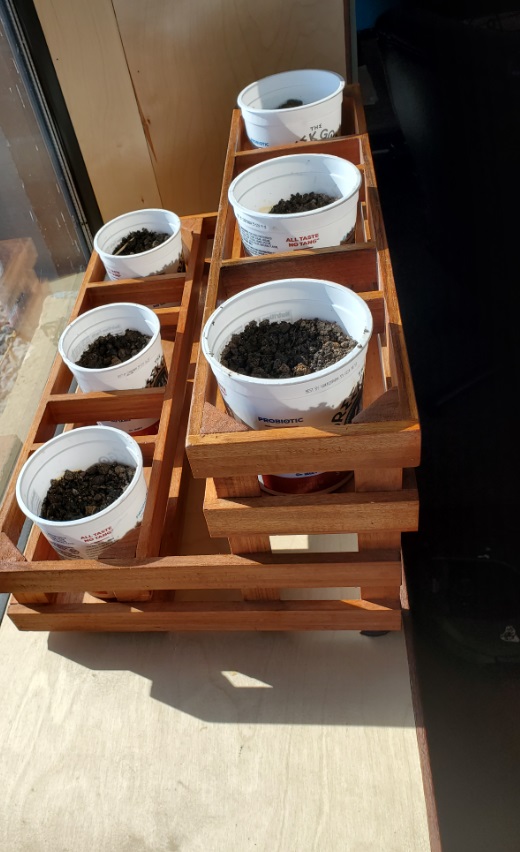 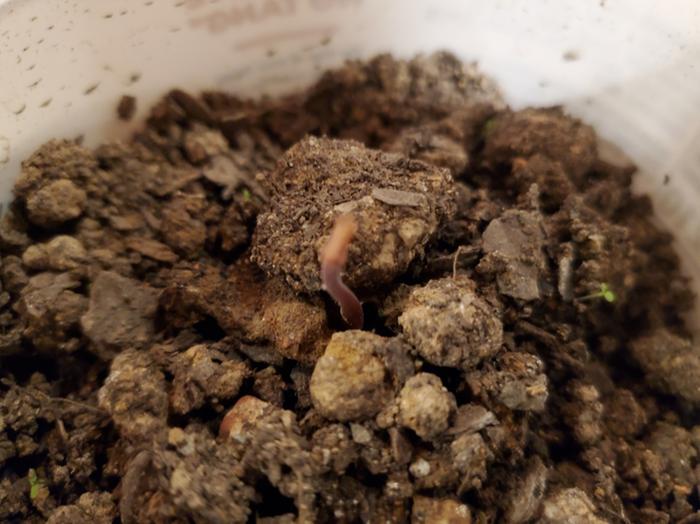 greg mosser
pollinator
Posts: 386
Location: the mountains of western nc
91
I like...

posted 1 week ago
pecans are notoriously hard to take successful cuttings from, almost always with really low success rates...i don’t understand why a state nursery would use that technique when growing from seed is almost foolproof. i’m curious what evidence of being cuttings you saw? hard to make out anything in the pic.

Threw me for a loop as well that the pecans would be cuttings. I don’t claim to be an expert, and that was the only picture I had and they are now all in the ground. I am attaching a zoomed in version of that picture.

I will also describe what I saw though, the evidence I saw that made me believe they were cuttings was that they tapered and the trunk got larger as they went down even past the “root line”, with the largest diameter at the very bottom of the “roots” which ended on a cut flat bottom. (whole thing looked exactly like the end of a branch cut off.) The “roots” were all tiny feeder sized roots attached radially around the bottom 8" of much  larger central straight “root trunk.” You can make out the tiny roots in the picture. The root trunk was up to ½” diameter on a plant only 16” long including the roots. There were no medium sized roots, only the small ones. There was no tap root. The root trunk height from the bottom was relatively consistent at the same depth from the bottom of the cut end to where the root to trunk transition occurred. (Like they were all stuck in something to make it root.)

If it was a seedling, they certainly cut the taproot off. It still did not look to me like a normal but trimmed off root system but I will defer to those more knowledgeable than me in pecans if what I am describing could be a seedling with the root system cut off past 8".
Pecan-Roots.jpg 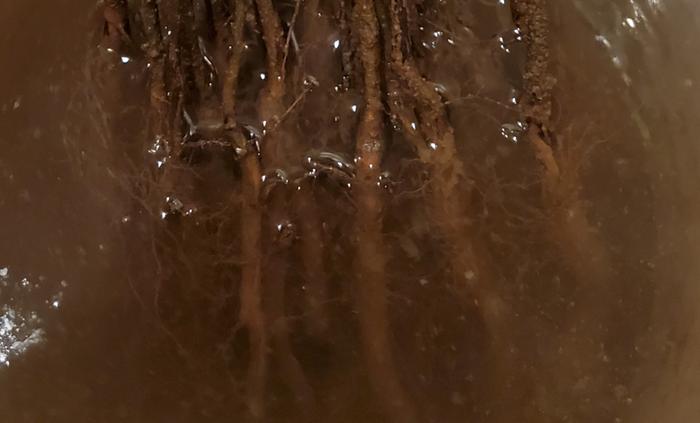 John Young
Posts: 80
17
posted 6 days ago
I am finishing up some of the clearing work in the location where my pecan “orchard” is going. While most of the site being an old field was clear, there were some trees just above the field, mainly smaller or damaged ones, that had to go which are now cut and drying to be processed into biochar.  Basically, the trees I was not willing to remove define the borders on two sides of the “orchard” with a ditch on the bottom and the property line on the east side.

My current plan is to space the trees 45 foot north to south, which is along a south facing hill. The trees will have 60’ clear east to west, which is from the property line to existing tree canopies. I can fit about 8 pecan trees at this spacing.

The soil in this area needs some work. Like most of my soil, it is mostly clay devoid of any life or nutrients. My strategy is to heavily amend around the trees initially to buy some time, and build up the rest of the soil over time.

My current plan is to:
run the subsoiler on the entire area to the extent possible to bust up compaction,
attempt to pull out the stumps and cut the stubborn ones flush,
re-subsoil and heavily amend the soil in the area directly around the trees (3’-4’) with some better topsoil or amendments prior to planting,
mulch the same area around the trees heavily with wood chips after planting,
plant annual ryegrass and crimson clover on the remaining portion of the orchard with intention of building that soil up over time.

Over time I would plan to chip and drop the cover crops, gradually add amendments to that area, and increase the wood chip perimeter around the trees yearly. This plan is because I don't have enough amendments to amend the entire area yet and if I don't amend at least some of the soil I am fairly confident the trees will not thrive/survive.

John Young
Posts: 80
17
posted 4 days ago
The Chestnuts in the windowsill continue to shoot up faster than I anticipated. The tallest shoots are already 6" high. My current plan is to buy some caps that will fit on a 4” pvc pipe to create some extra tall nursery pots, as I am sure the tap root has already hit the bottom of these yogurt containers.

I was able to finish mulching the initial 26 pecans that I planted in the woods yesterday.

I continue to plod along with my cleanup activities in the spot that is to become the pecan “orchard.” 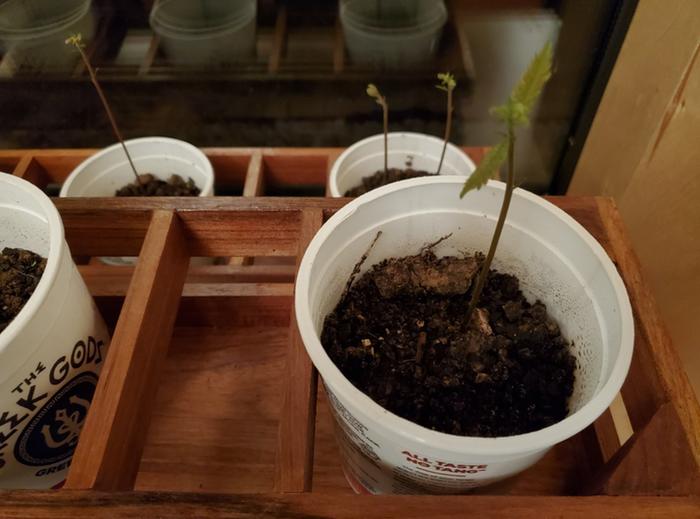 John Young
Posts: 80
17
posted 2 days ago
So I repotted the chestnut trees today, as I had predicted the tap roots had already hit the bottom of the yogurt containers. I made my own containers out of sections of Sch40 PVC with removable rubber end caps (Ferncos) to form some 18" tall "pots." That should give the tap roots room to grow until spring. I tried to get the tap root going down as I repotted the plants. I plan to reuse these containers for tree starting in the future, they should last a very very long time.
Chestnut-Sprout-5.jpg 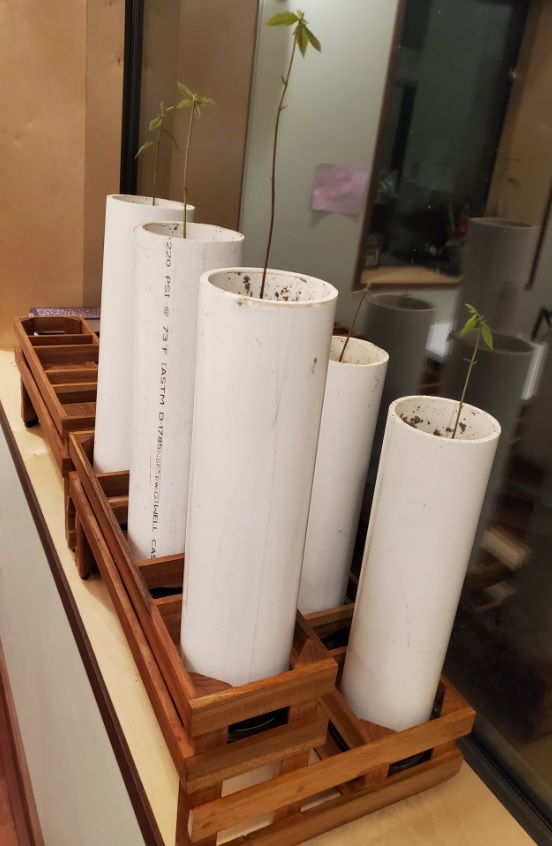