posted 1 year ago
I'm not quite sure how our paths had never managed to cross before, but serendipity recently led me to finally make contact with someone who seems likely to become a bit of a hero of mine. And hopefully a firm friend too.

It started completely by accident when my mother died unexpectedly and covid travel restrictions meant that I was unable to return to the UK for the funeral, or to the clear the house so the keys could be handed back to the housing association. I put out a plea for help among my friends, and one of them said

"Why don't you ask Ru? He'd probably store a few bits for you in return for clearing the rest to sell for his tree-planting charity in Kenya."

It seemed such a perfect solution. How could I resist?

I can't begin to tell you how awesome he's been holding my hand remotely for the house clearance, but there's so much more to this amazing man. 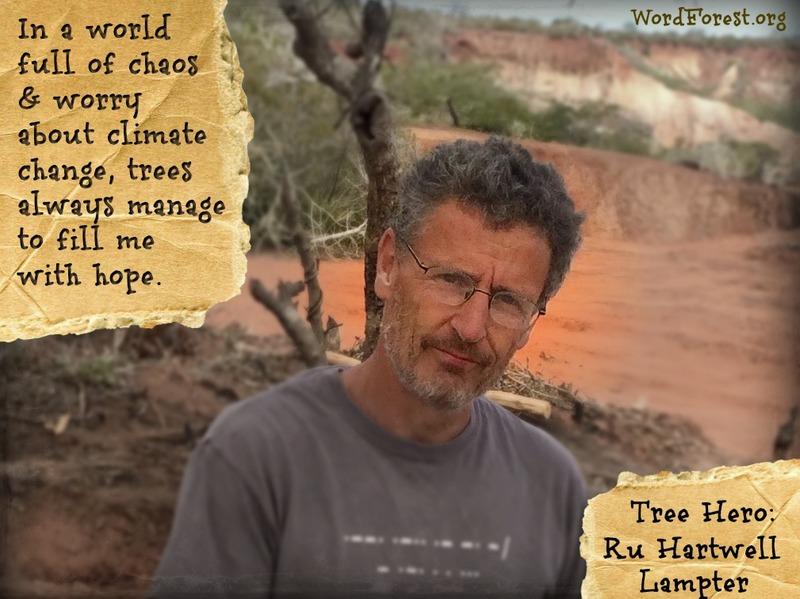 In it, he encourages us to think about where the 'stuff' in the tree comes from and to consider it as essentially solidified, living atmosphere, having used light to create naturally occurring organic polymers, not dissimilar to plastic.

He then takes us on a brief history of atmospheric CO2 concentrations, pointing out the dramatic drop in CO2 when trees appeared and explains how much became locked up in coal during the carboniferous period.

He encourages us to explore the possibility of switching our diets to include more food from trees - "treefood".

The blurb for the video has this to say...


Ru Hartwell is a maverick forester from Mid-Wales who has been planting trees to remove carbon from the atmosphere since 1983, at which time he was sometimes referred to as ‘that climate change nutter up in the mountains’. He helped to set up the national reforestation charity, Size of Wales and currently runs the Community Carbon Link, a forestry project connecting Wales and Kenya that has so far put in 3/4 million trees. In 2006 he was the first person to come up with the concept of planting trees to absorb air travel emissions so has some familiarity with the controversy surrounding ‘carbon offsets’. He believes that if we can shift our conception of what trees are, we can unleash their tremendous absorptive potential and so take advantage of our biggest ally in the battle to stop the planet overheating.

Ru is the director of Carbon Link


Since 2008 Carbon Link has been helping ordinary people and businesses in Wales (and further afield) take more responsibility for our climatic impact by supporting carbon draw down initiatives with a partner community called Boré in Coast Province, Kenya.

So I immediately researched a little deeper and found a website about the Boré Forest Centre in Kenya.


We have been collaborating since 2007 on a range of sustainable development initiatives. Over that time 550,000 trees have been planted, 40 acres of indigenous forest protected, 3 class rooms built, 4 nurseries and a community water supply established.
​
Tropical trees play a crucial role in regulating planetary temperatures so our overall project mission is to work together to create a sustainable development model that generates employment and a range of other economic benefits for the community of Bore which enable them to protect rather than consume their local forest resources.
​
By helping our Kenyan partners conserve their forest we are doing our bit to keep the atmosphere healthy for everyone.

Here's a couple of videos...

I love this one of everyone helping to move the young trees in whatever way they can to be planted. Gotta love the donkey cart...

This video is a more recent update from just a few weeks ago.

For anyone in the Lampeter area in Ceredigion, Wales, here's a link to his Climate Shop.

And if anyone happens to need a house clearance I can heartily recommend getting in touch with him for that too.

posted 1 year ago
For anyone living locally, the shop is in the old post office in Lampeter and  can accept any donations from people wishing to turn their unused gear into trees/carbon.

The shop is  doing brilliantly so far and took just under £5,000 in the first 3 weeks, and that doesn’t even include my mum's mobility scooter which hasn't sold yet. That’s enough to plant 25,000 trees down there in Kenya.