posted 11 months ago
This post is to detail two generations of fava selection and the improvement that can be made in that time.

My starting seeds were of the Extra Precoce A Grano Violetto variety from Baker Creek. Here's how the plants looked that first year: 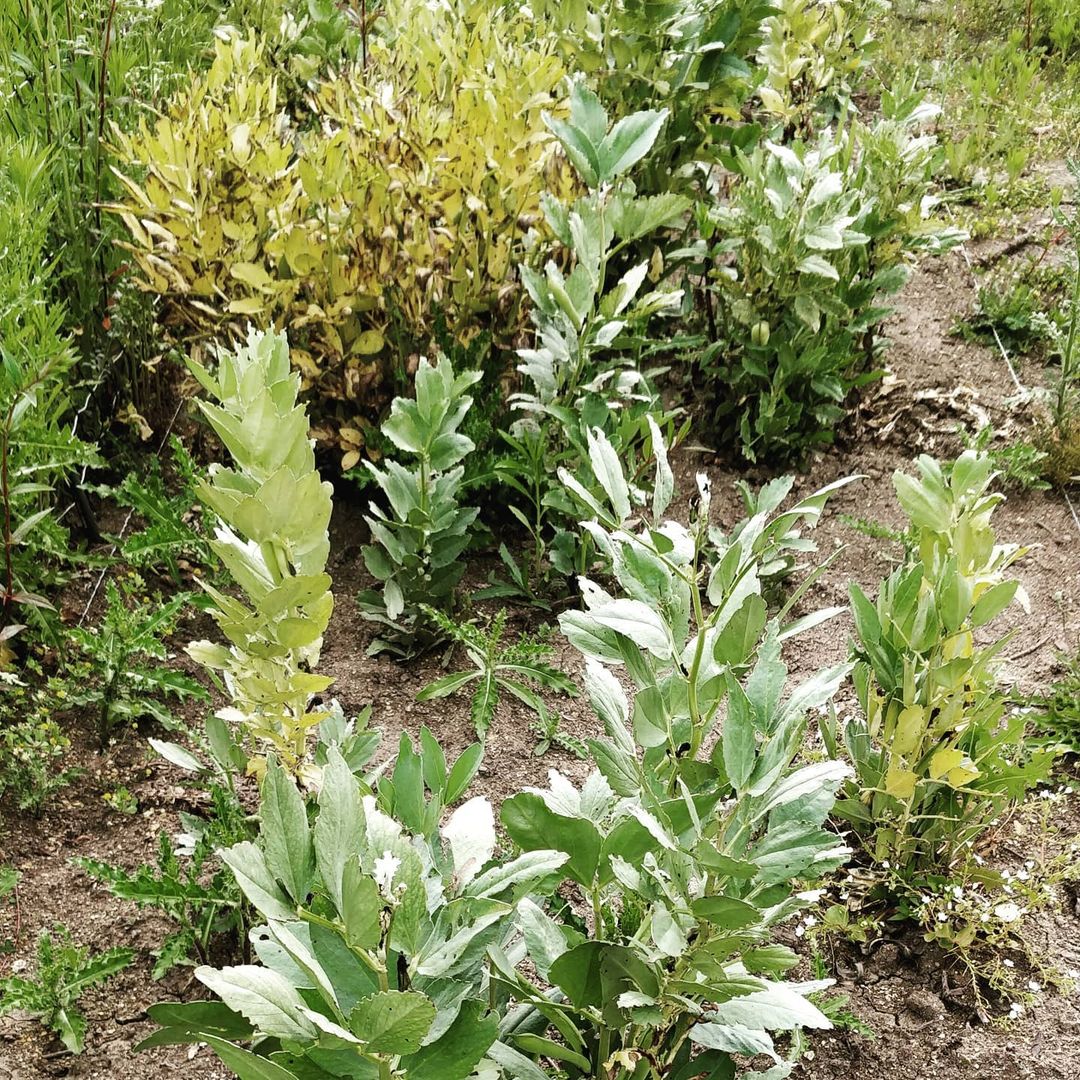 There was a lot of variation in plant vigor. As well, we had an especially cold and wet spring which caused many things to succumb to fungal disease. You can see a fair bit of yellowing in the plants pictured above (apparently irrespective of their vigor). Here's a closer example of how disease presented in the favas: 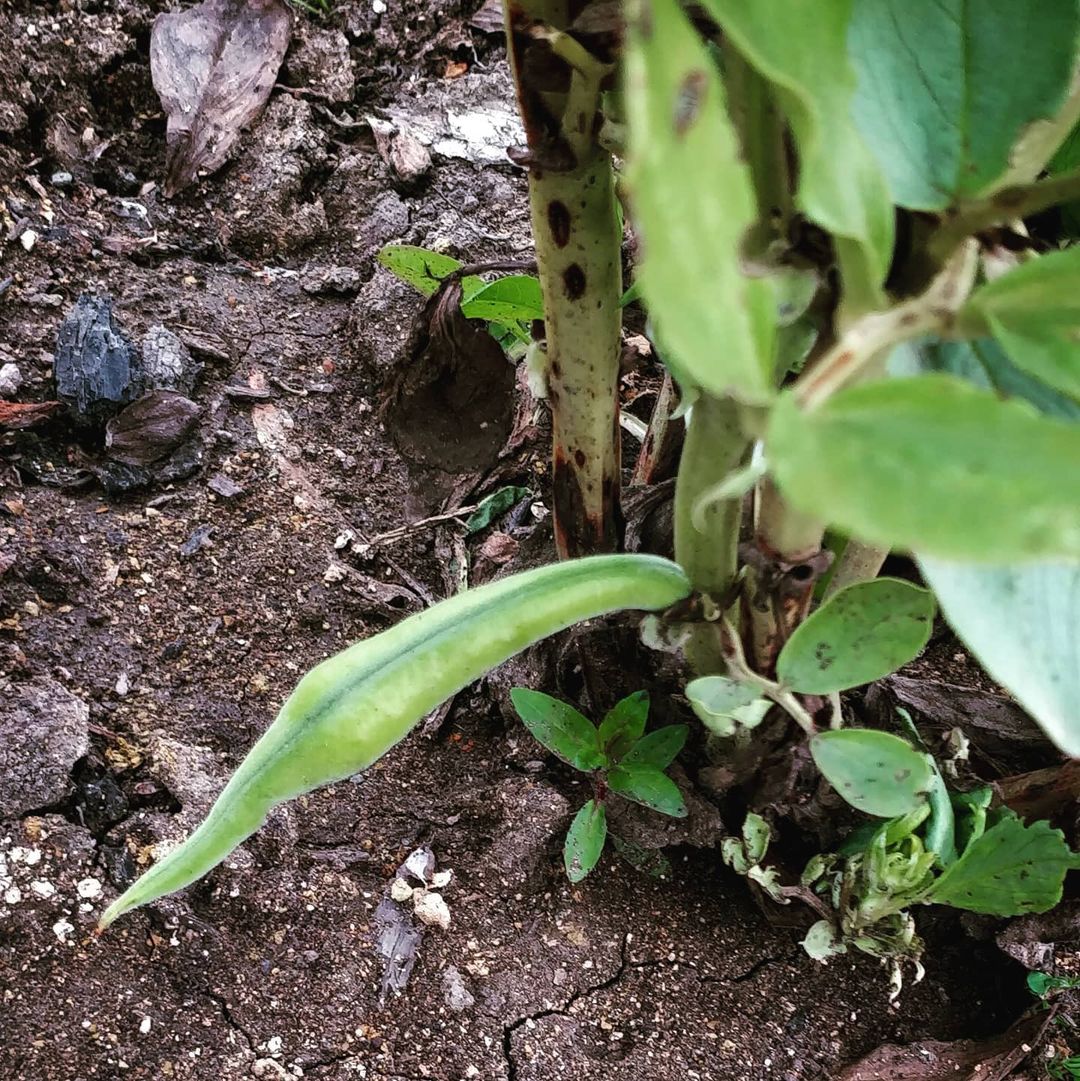 I did not want to excessively limit the gene pool so I let the plants self select and collected seeds from all of the plants that managed to produce regardless of how the plant looked. Plants that did better simply produced more seed and contributed more material to the next generation.

Here is a subset of the seeds I collected: 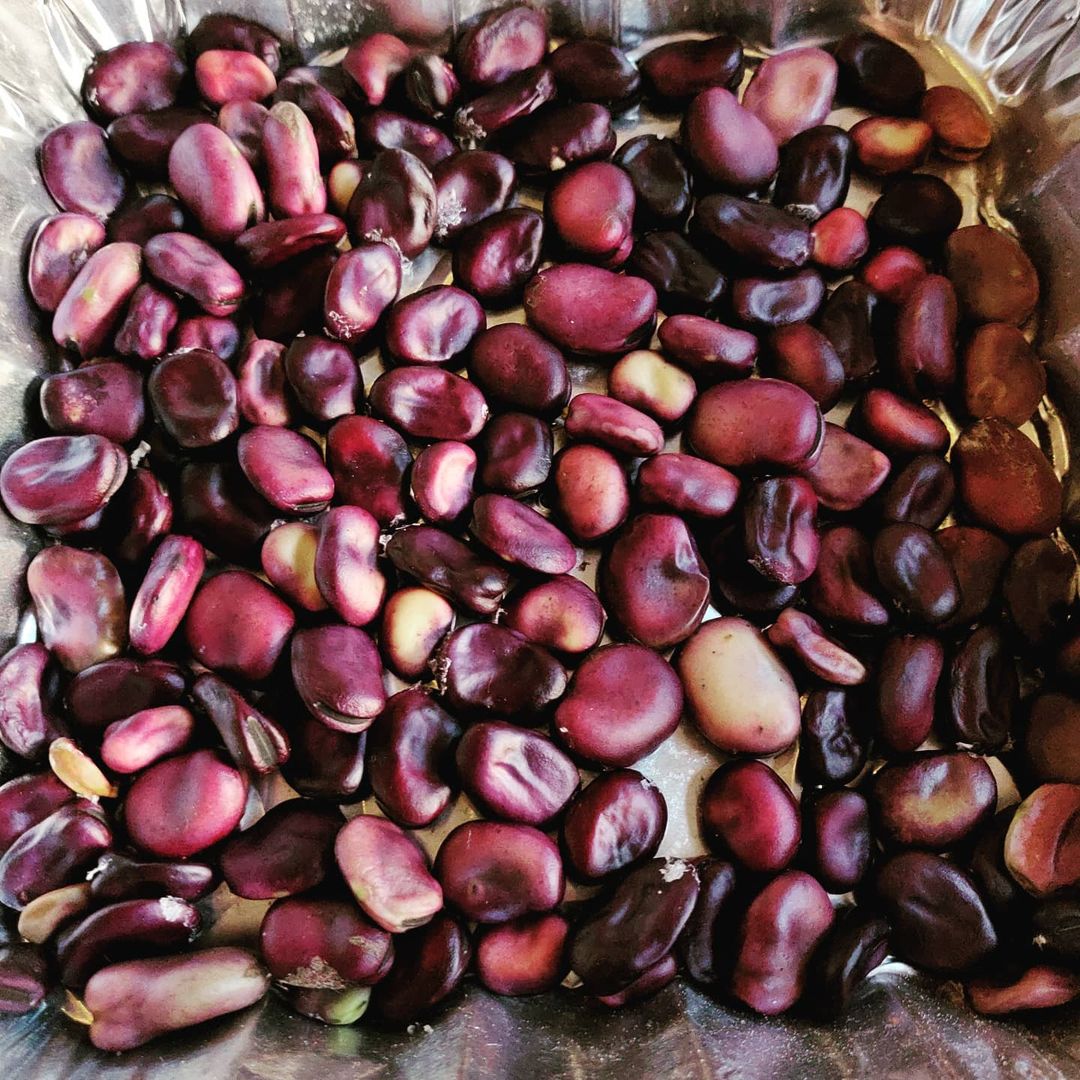 I did not freeze the seeds (more out of negligence than intention) and weevils soon began to emerge. I used the opportunity to preferentially plant seeds without weevil damage in the hopes that the reason was genetic rather than just dumb luck. 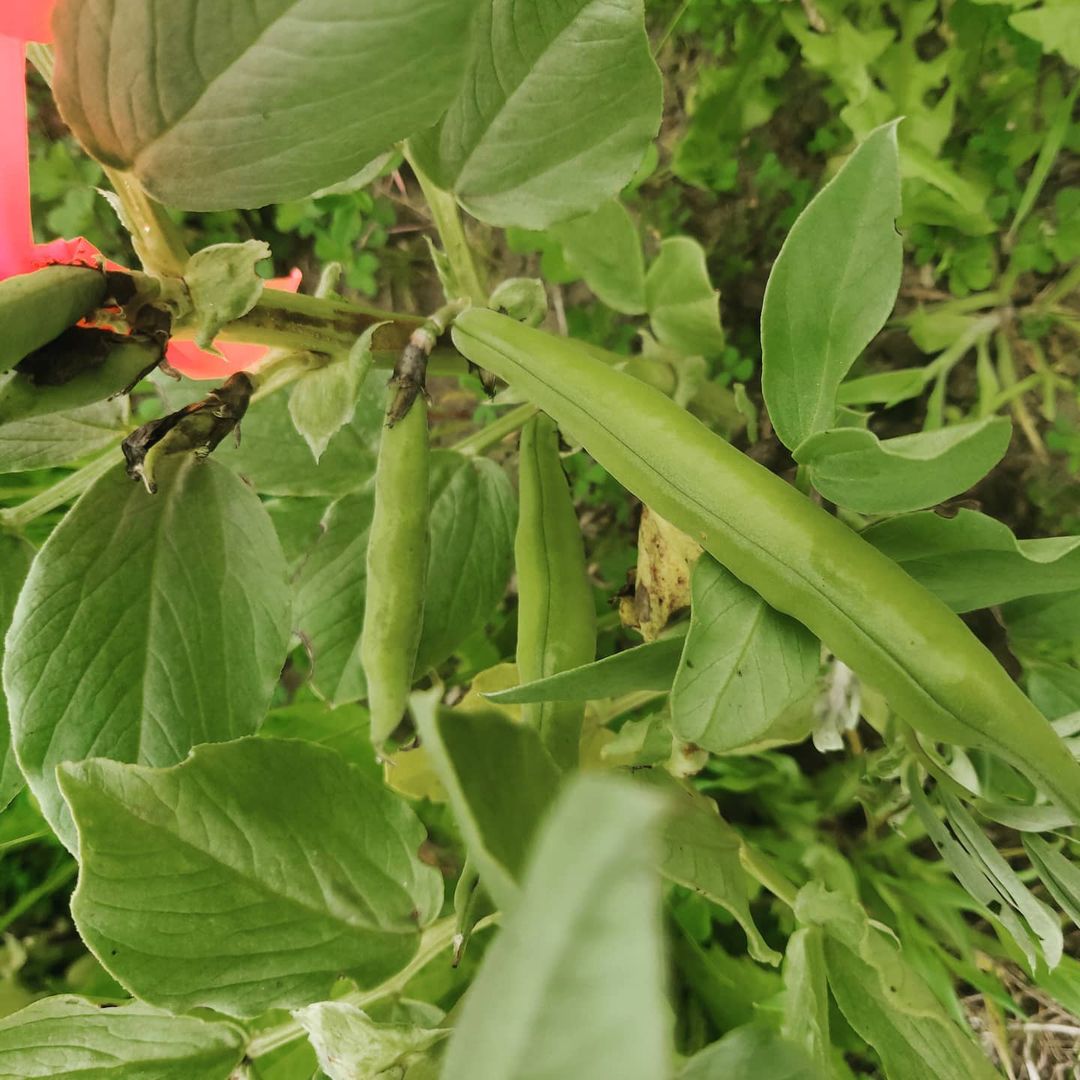 The above image shows the result. This season was entirely different from the last, heating up and drying out especially early, and then proceeding with 179 days without measurable rain. The plants on average were more vigorous (though flowering was about 5 weeks later compared to the previous year) and showed very limited fungal disease.

I flagged the plants which were earliest to produce out of the entire planting but ultimately ended up disregarding that selection since those plants also produced the vast majority of the total seed collected. Instead I ended up shelling them by hand and selecting all of the beans that came from pods with 4 or more beans. There was a lot of variation in the number of beans per pod, with many only managing to mature 1 or 2 beans. 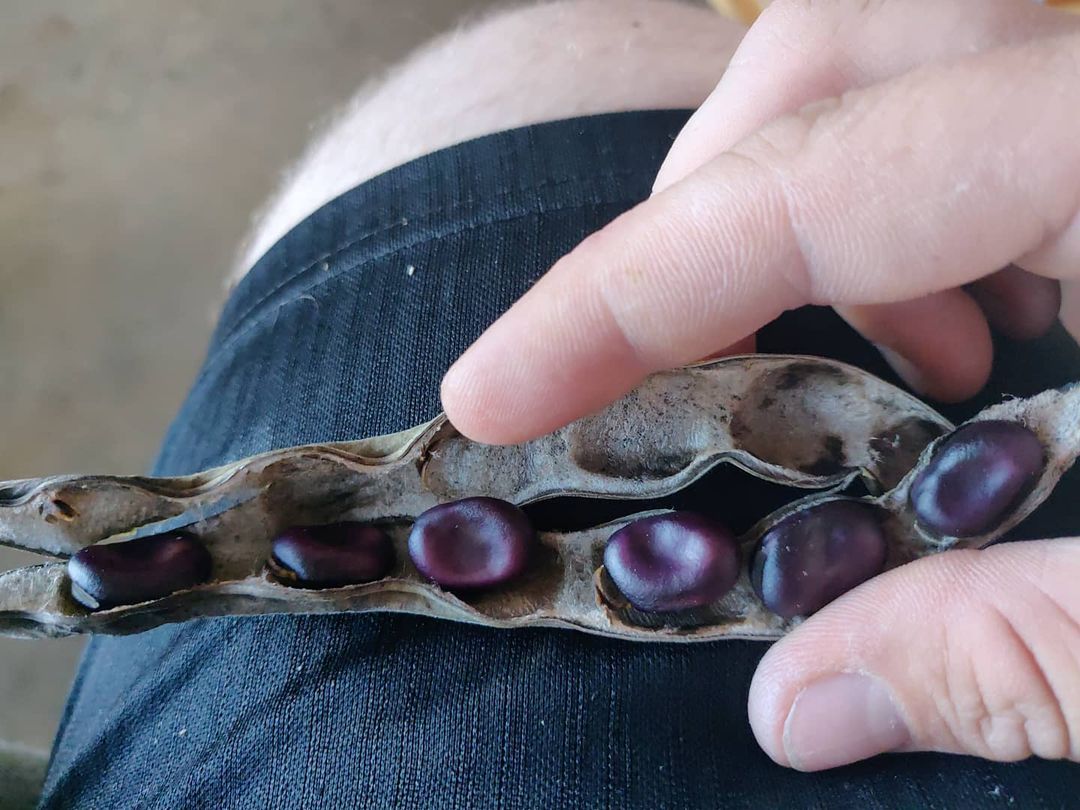 The beans from pods with 3 or fewer beans went into the freezer to kill the weevils in preparation for consumption as dry beans. This time I intentionally left the seeds I intended to plant out and awaited the emergence of the weevils. Here are seeds with obvious holes left by the weevils on the left and seeds without holes on the right: 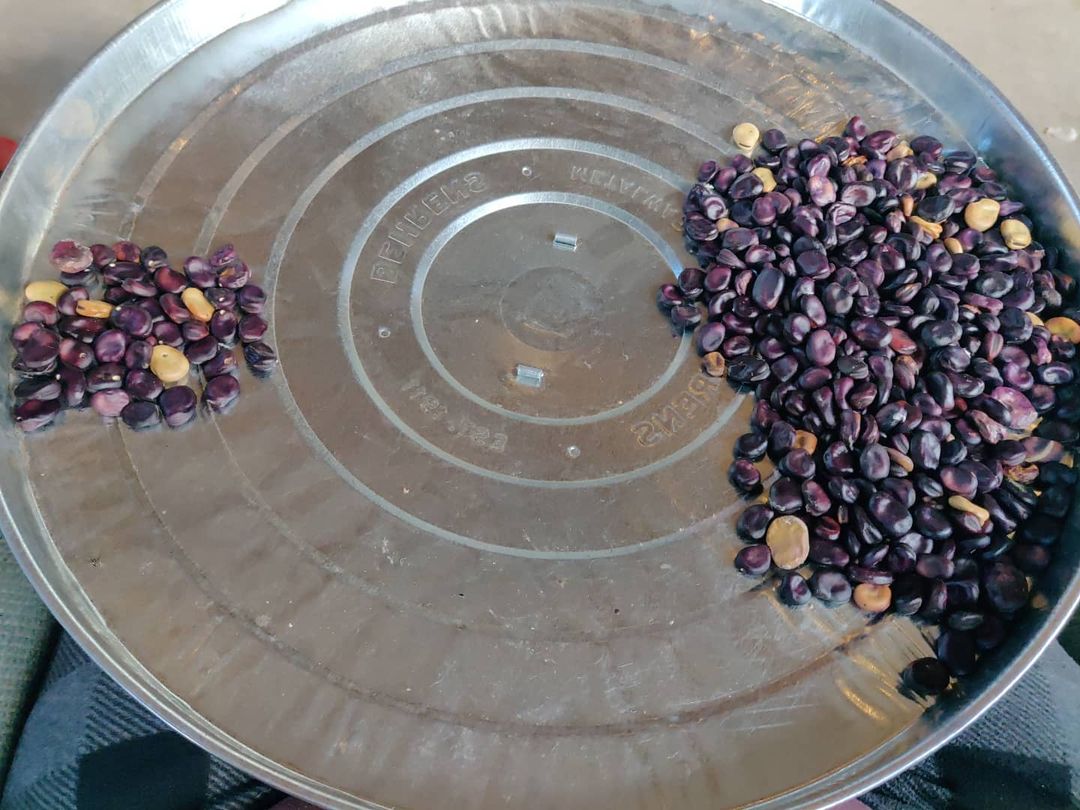 As you can see, there are a great many more beans without damage than beans with damage.

I then proceeded to inspect the remaining seeds for less obvious signs of weevil damage. 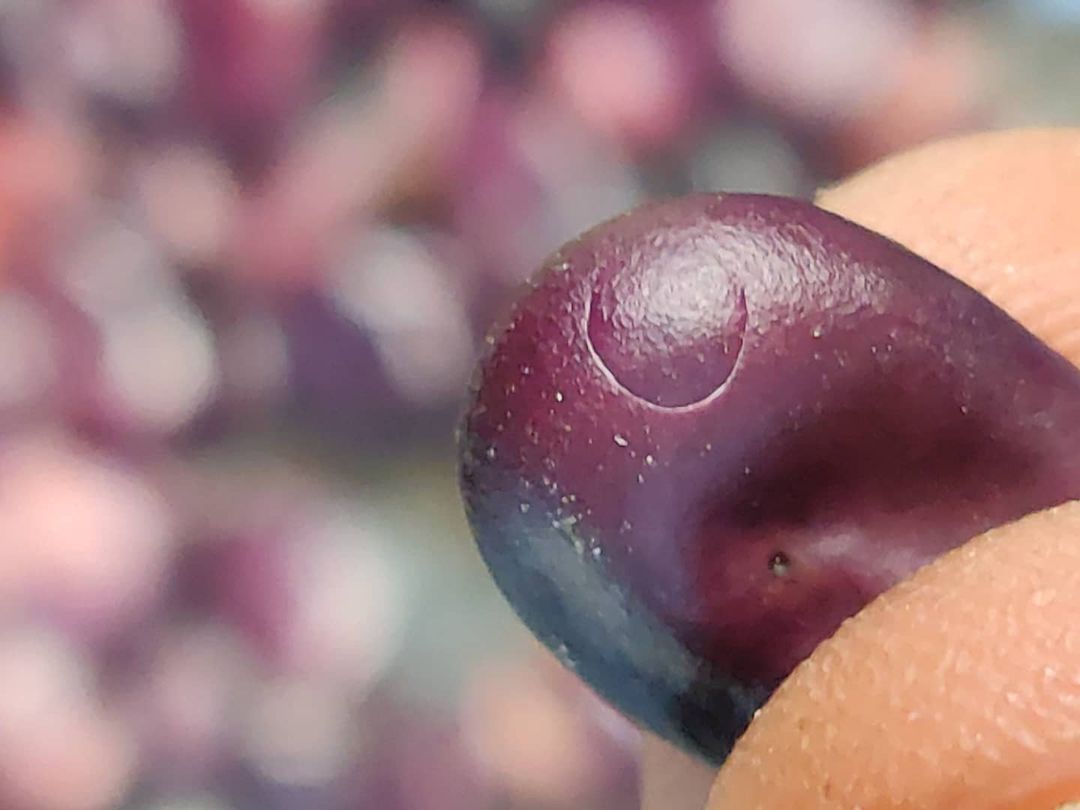 Weevil damage typically presents as a raised circular area that's generally easy to spot under good lighting, though sometimes the circle isn't as neatly defined. With practice you can catch the way the light hits the bean in a weird way that indicates that a weevil is inside. To confirm weevil damage, simply press on the spot in question with a toothpick or similarly pointy object. The area will generally give without much pressure, though sometimes a little extra force is necessary. This not only identifies the weevil contaminated seeds but also eliminates the weevil inside. The additional culls are on the left with the remaining seeds on the right: 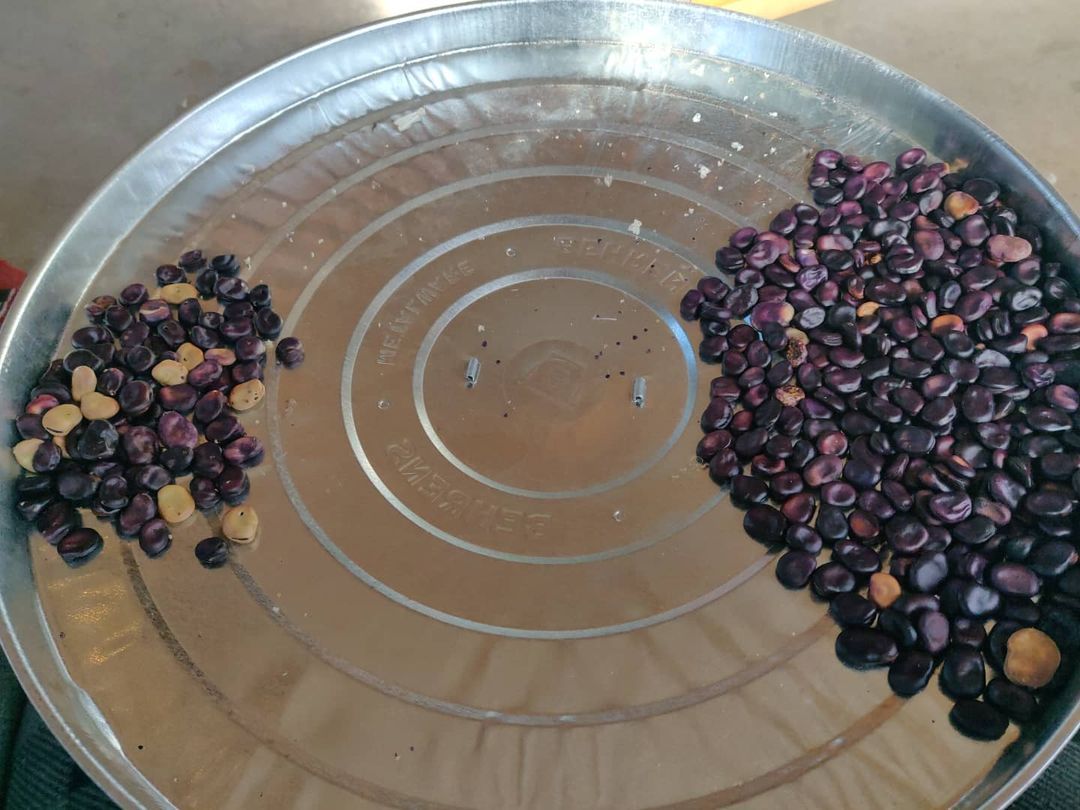 After that I selected the best 200 seeds from this generation for replanting. I primarily excluded seeds with less ideal shapes, textures, and colors which may have indicated the presence of disease or maladaption to my site, as well as showing preference for larger seeds over smaller seeds. This was the ultimate selection from this generation (again, on the right): 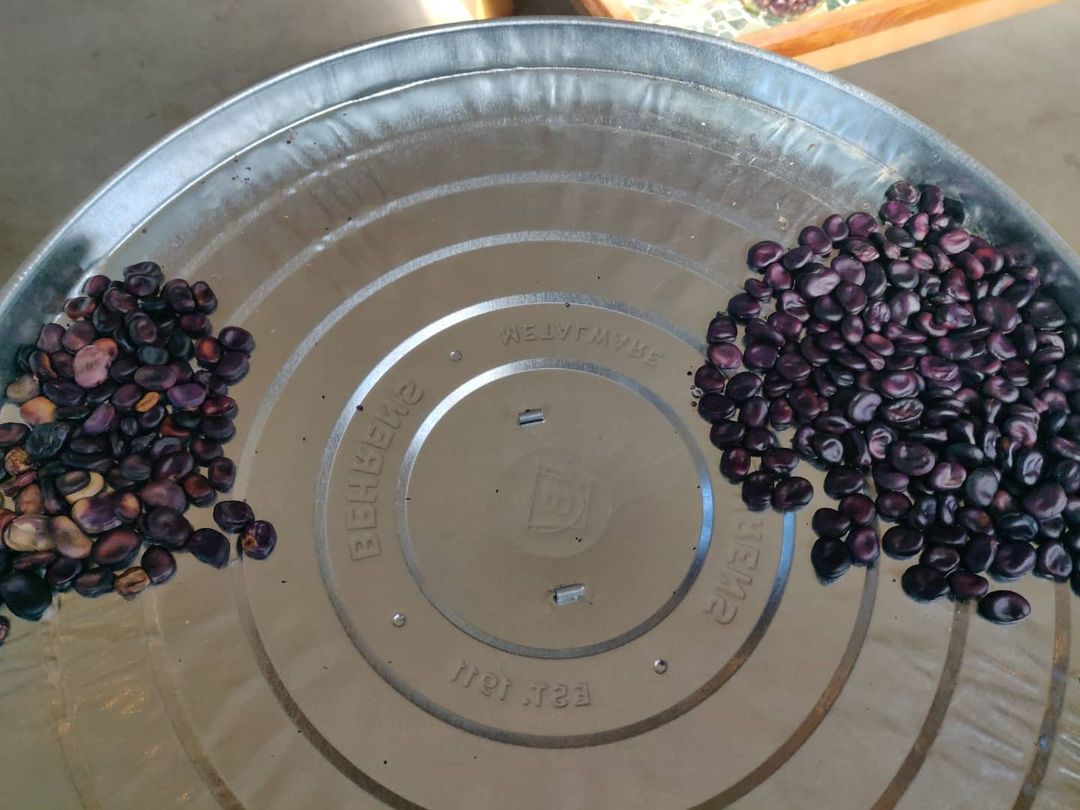 In addition to the 200 seeds selected from this generation, I also added an additional 56 seeds from those remaining from the previous generation just to keep from excessively limiting the gene pool. It may not be as apparent from the following photo, but there is a significant difference in the quality of the seeds from the newest generation to the previous generation. However, I was still able to find 56 seeds without obvious weevil damage with maybe half a dozen of those with less obvious signs of weevil damage. 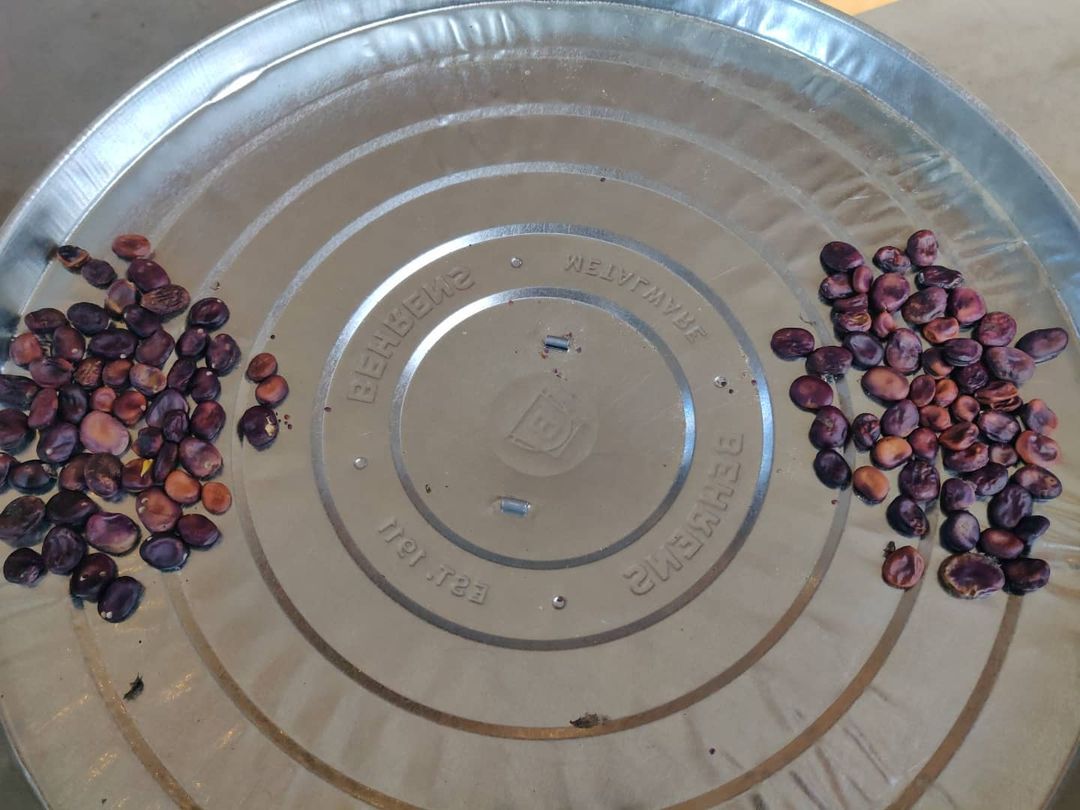 The beans taste great when picked fresh and pan roasted with no need to remove the skins: 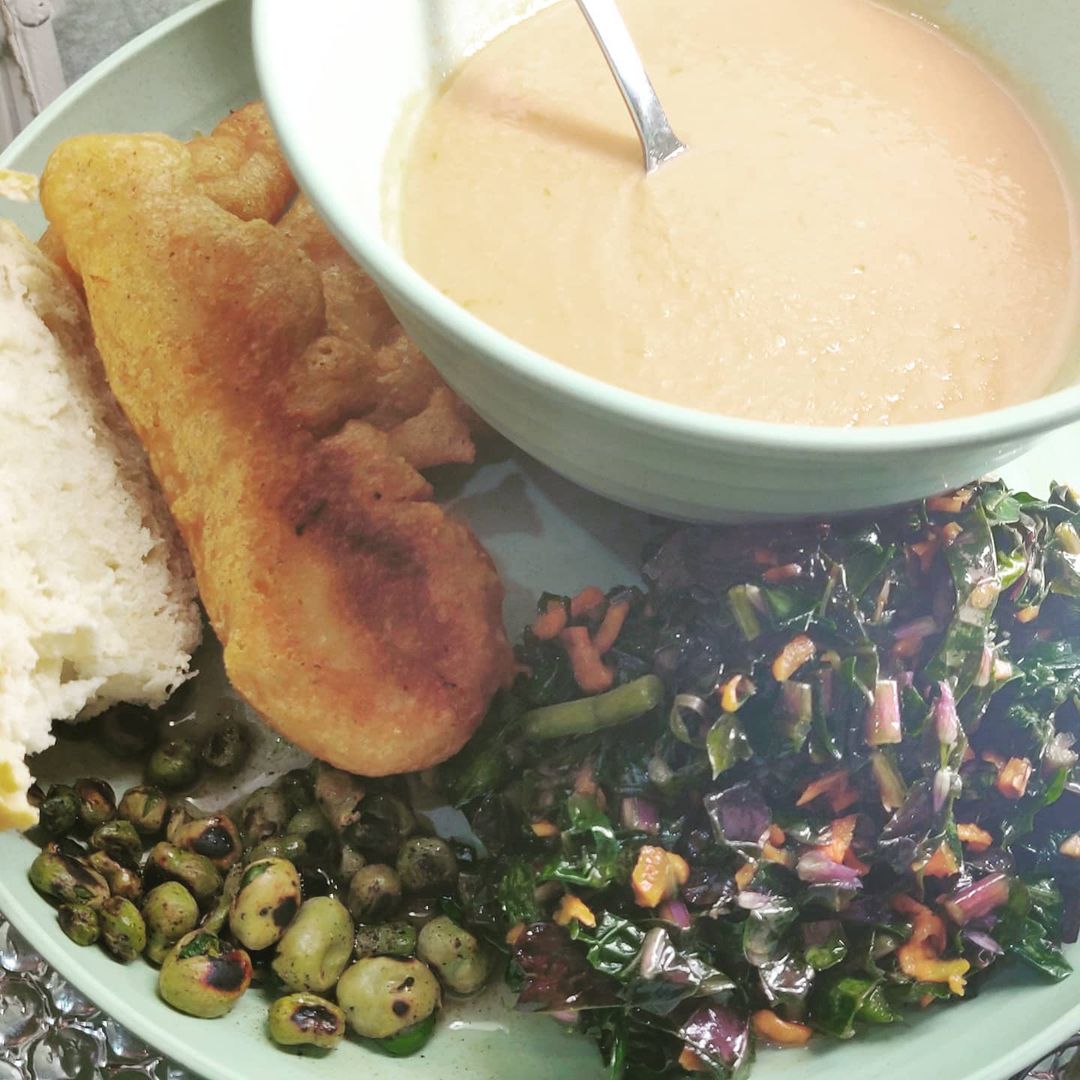 The dry beans are nothing to write home about, though perfectly fine to eat. This coming season I'll be continuing to select for production as well as selecting plants on a case-by-case basis for flavor.

I'm trialing a CSA this year for seeds from the various landraces I'm working to develop for our area. Thanks to Jennifer, my first CSA member, I was able to add 22 new varieties of plants to my breeding projects from bioregional seed suppliers, including 3 varieties of locally adapted favas.

The first variety I was able to add  was Cambridge Scarlet: Since favas, unlike many other legumes, depend on pollinators for fruit set, and since favas show relatively little variation in flower color, I wanted to add this variety to the mix and see if the red flowers could attract a different subset of pollinators and thus potentially improve yields. They are reported to have small to medium seeds, which runs contrary to my current intentions, though I'm not opposed to small beans if they prove to have superior culinary qualities.

The next variety I've added is Gold AKA Elio, originally from the Peruvian Andes: It does appear that the seeds for this variety may be carriers for some disease, judging by the dark spots in the picture (my seeds are arriving later this week and I'll be able to confirm whether they have the same spots.) I gravitated toward this variety because the bright color made a nice contrast to my existing purple beans, as well as the dry beans being described as making "delicious hummus" which indicates that they could help in my goal to improve the flavor of the dry beans. This variety is described as producing 12-20 pods, which far outpaces what my plants have been producing thus far, and beans around 1 inch across, which fits my quest for larger seeds. Additionally, the swirl pattern on the seeds is absolutely gorgeous and I'm hoping that the swirl pattern can transfer to the other colors of beans in successive generations, though I'm unsure what genetics underlie that pattern.

In addition to the above varieties which were added through the support of CSA members, I was also offered a selection of Andy's Broad Bean from another wonderful Permies member. In addition to the beautiful bright green color, Andy's broad bean is described as productive and an excellent dry bean, which could also be a boon toward improving dry bean flavor in my existing project. As well, pictures from one supplier indicate that Andy's Broad Bean could be a purple-podded variety (or at least dry down to a darker color), a trait that I've really come to appreciate in peas because it makes them easier to find and harvest.

All in all, this is looking to be my best season for favas yet and I'm looking forward to seeing what these new varieties can add to the mix.

I'm new here but I do enjoy chatting with other gardeners, so Hello!

I never get to the bean stage of Favas as I like to eat the greens. Pulling off leaves when young or snipping the tops as the plant grows is easy for sure. Simple to clean, just rinse off with water, pat dry or let air dry, and then skillet fry with a little butter. Add garlic and green onions if you like.

The nutty taste is wonderful! Does anyone else do this? Next growing season give it a try if you haven't!

I'm new here but I do enjoy chatting with other gardeners, so Hello!

I never get to the bean stage of Favas as I like to eat the greens. Pulling off leaves when young or snipping the tops as the plant grows is easy for sure. Simple to clean, just rinse off with water, pat dry or let air dry, and then skillet fry with a little butter. Add garlic and green onions if you like.

The nutty taste is wonderful! Does anyone else do this? Next growing season give it a try if you haven't!

I take the tips off when the first pods have set, they have a lovely taste similar to peas, much nicer than spinach in my opinion. Maybe I should grow a crop just for tips, I saved over a kg of seeds a couple of years back so I certainly have enough.

Bill Taylor
Posts: 9
6
posted 11 months ago
We use the tender leaves and flowers in a salad mix.  Taking only 10-20% leaves enough energy for bean production later which was important in CA.  Here in zone 5 in wet summer Massachusetts bean production is very low so it seems leaf and flower production is the main deal.
C Lundquist
Posts: 98
Location: Seattle, WA
42
I like...

posted 4 months ago
I've started to grow favas again, and grew 3 varieties the first year and let them all cross freely. The second year I had a lot of poor growth similar to your first year and rogued many out. This year the plants all look beautiful. I'm afraid I've gotten a mix with smallish seeds, and would like to add some bigger varieties into the mix in coming years. The red and purple colors you have look wonderful!

Favas are my main cover crop now, and because of my limited space, many of them need to be removed right now so I can plant squash and tomatoes. They haven't set seed yet, so I'll be eating their tips instead! So yummy!

Little house with a big garden in the city!
"It is no measure of health to be well adjusted to a profoundly sick society." ~ J. Krishnamurti