when it rains it pours..

Brenda Groth
pollinator
Posts: 4437
Location: North Central Michigan
29
posted 12 years ago
the first two pictures are where we graded the soil to drain away from our house and our son's..where we buried the pex between us for the new hot water boiler last November..and hadn't gotten it replanted to lawn for Katelin to play on.

well the first two pictures are before seeding to grass.. 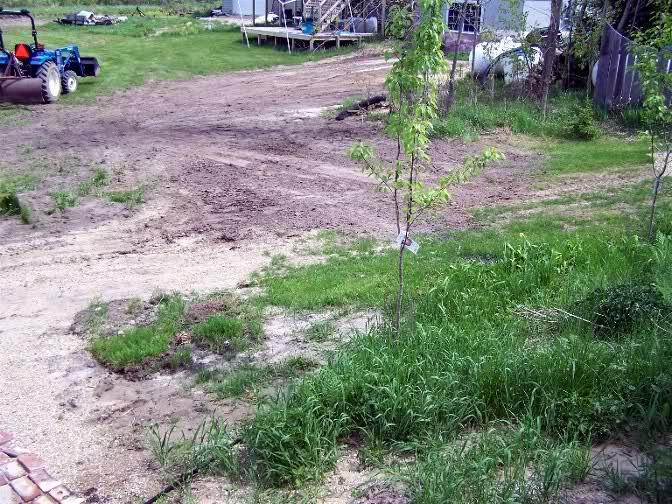 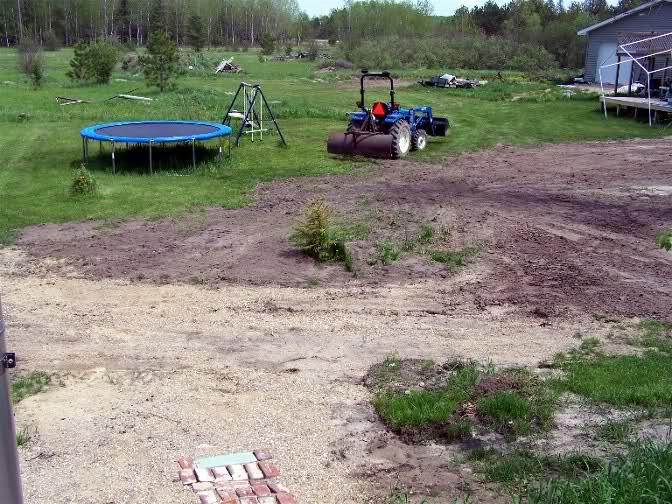 so then we went and bought 47 pounds of grass seed and most of it went in that one spot between us an Joel..and some other in a few other places that needed patched..

we got 2 bales of spoiled hay and put down over it on Monday and watered it well to set it in ..

and then nature struck...the next two pictures are from 10 am yesterday until 10 am toady..our rain guage is full, the water is no longer just standing..but running downhill..and hopefully all the grass seed will not end up in the pond. 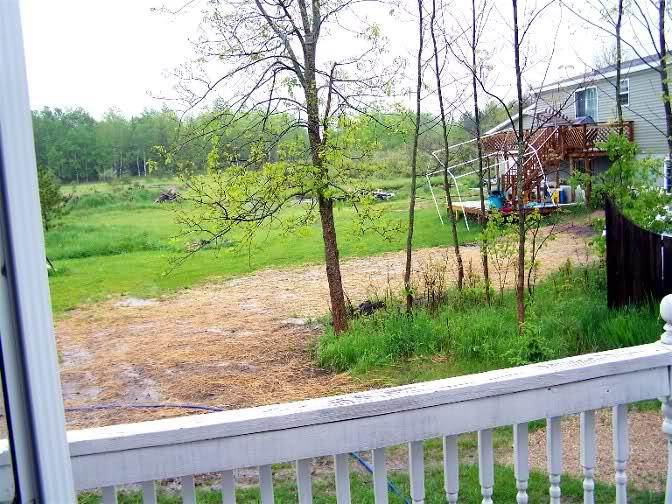 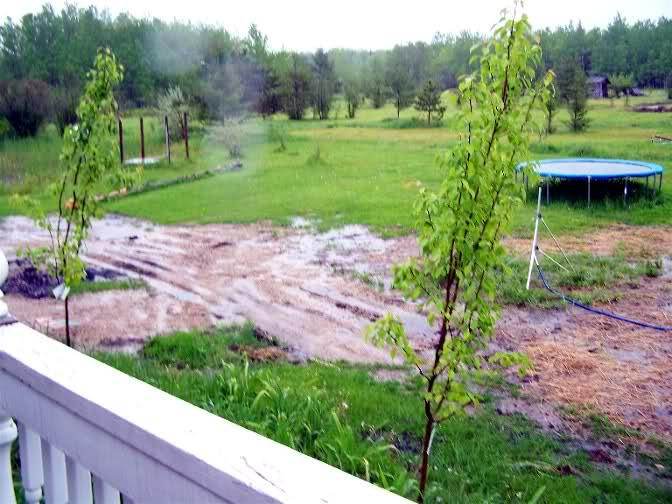 Joel was smart to say, let's not seed the area in front of the furnace shed (where it is gravel and there is no hay down) as we'll be driving over that area when we finish building the furnace shed (north side wall and addition not done yet)..cause if we had we would have likely lost all the seed anyway.

hopefully if any runs off Joel's side where the hay is..it will land in the unseeded place and seed it..and maybe there will be enough that stays with the hay and seeds his place ok.

we have rain forcast for every day except Friday through next week Tuesday.

sure didn't expect this much..they said "off and on isolated showers all week"...duh..

in the first two pictures i was standing on the rear deck next to the furnace shed, looking toward Joel's place..you can see where he is going to put a walkout from his basement (where the 4x6 window is now)..a small grove of ash trees between us and him just leafing out and in some pictures you can see a few of my baby pear trees on that side of the property..and 2 baby spruce trees we are babying in the lawn..trying to keep from killing with all the construction.

that big log is one we drug over from the field to cut up for firewood..before the chainsaw quit..but we'll get it done now that we have a new chainsaw..no gas yet.

the posts and deck by the pond are coming out..we don't like them there...was going to hae an arbor over it..but changed our mind..blocked too much of the view from Joel's place so it is coming down and getting moved out..when we can GET TO IT.

the brick path is also coming out ..right now it is a bridge to nowhere..we put them in to have a solid footing to walk up and down the hill while we were working on the pex there..and the hillside..but don't have any use for it now..as it leads to the railing on the deck now.

ins co made us put the railing up.

Brenda Groth
pollinator
Posts: 4437
Location: North Central Michigan
29
posted 12 years ago
as of today we have had rain every day for 6 days..one day it almost made it with no rain..rain coming in tonight now for the next 2 to 3 days..then they say a break and more rain for another few days.

Posts: 37
Location: Western Washington
posted 12 years ago
Usually it's those of us here in the Pacific Northwest who complain about the rain.

In fact, I was doing that (can you say "major whine") just a couple of weeks ago.

Heck, I had a fire in my wood stove no more than two weeks ago!

We're having a run of really nice weather right now.  In fact, the last two or three days have bordered on being a little too hot (a little muggy, too).

C.
Brenda Groth
pollinator
Posts: 4437
Location: North Central Michigan
29
posted 12 years ago
today's forcast is for 14 days of cold weather and most of those days rain..when I say cold weather that is nights in the 30's and day times in the 50's..until at last June 14 according to weather channel.

grass has been in the ground 7 days, rained last night..rained htis morning..more rain for a few more days..no sprouts yet..probably could use some sunshine for germination

haven't checked the "crops" yet, they are in the back garden, and that is a long walk "in the rain" but last i check none of the monday seeds last week, have sprouted so far..probably a good thing with the frost in the forcast

Posts: 66
posted 12 years ago
whatever happened to the grass seed? 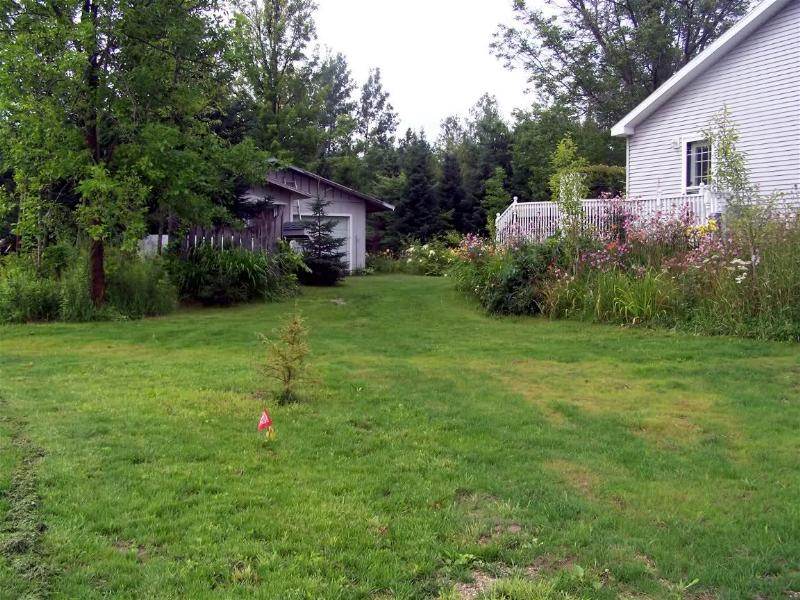 this area turned out really pretty good, it has been mowed now twice but there are still some really sparse areas esp up by the woodboiler building (2nd photo)

we had an addition that we had to add to the woodboiler building so we still had an area we hadn't graded yet..we just started grading and landscaping that area this week..still needs work..here are two photos of that area that will still be seeded before fall

we buried a french drain in this area also to pull water away from our foundation and under our newly built shed addition and to the pond..

I'll post a new thread on our addition to our woodboiler ..a woodshed..not done yet but getting there.

Posts: 37
Location: Western Washington
posted 12 years ago
You have a wood boiler?  How do you like it?

My son is trying to talk me into looking into getting one but it seems like I remember hearing/reading not so good things about them.

I'd love to hear some first hand accounts (maybe a new thread about it?).
Posts: 37
Location: Western Washington
posted 12 years ago
For crying out loud.  I didn't see your thread "Our adventure in wood boiler land."

(Somebody really needs to pay better attention.)
Brenda Groth
pollinator
Posts: 4437
Location: North Central Michigan
29
posted 12 years ago
well only heating with it for part of last year it was a trip..a lot to learn..and we learned a lot late..and we also didn't have wood that was properly cut for a boiler..but for a smaller stove..(short and split)..so hopefully we'll have a better year this year..and hopefully we won't have as bad a winter..as our winter last year was the worst winter in 30 years..maybe more..

posted 12 years ago
Brenda, your place looks beautiful! Thanks for sharing the "after" photos! I can't tell from the photos though it looks like your lawn is fairly short...do you mow at 3" or have you tried that?

Brenda Groth
pollinator
Posts: 4437
Location: North Central Michigan
29
posted 12 years ago
the grass you are seeing is very tiny baby grass..barely been mowed at all..just enough to keep the weeds in it from gaining ground..

in most of our yard the grass is so thick you can barely cut it with a lawnmower..but this new grass will take a while to fill in and grow..it was just seed earlier this summer and it hasn't had much of a chance..although i do think it will make it..just fine.