our adventure into wood boiler land

Brenda Groth
pollinator
Posts: 4437
Location: North Central Michigan
26
posted 11 years ago
Well this is a sequel to the other thread on this forum "when it rains it pours"..in that thread we were putting in grass seed where we had buried the pex from our house and woodboiler buildinig to Joel's house across 150 ' of lawn.

well that part is coming together fairly well (i updated that thread).

When we put in the wood boiler, we had normal firewood, split to stove size pieces as that is what we had been heating with, so it was a new experience, a learning experience that we are still going to be learning on again this fall.

WE are heating 2 houses and a large pole barn (son's) with our wood boiler..and we have to send his hot water 200 ' to his pole barn and 150 to his house..as well as to our house..so we ended up going through 40 cord of firewood last year.

If we had had it cut wood boiler stove size and not split we would have probably used much less wood, and had we know how to regulate it better..we were putting it in and building the shed in a Michigan November winter..so it was a hurry up and learn and finish fast thing.

well we put up a "temporary north wall" on the shed as we not ony didnt have time to finish, we quickly realized we were going to need more room to store firewod so we would have to put an addition onto the wood boiler shed to store more firewood..so this summer we have been just starting to get that woodshed addition built..here are some photos..in the "when it rains it pours" you can see the grading we are just getting done and the french drain we put under where we were to build the woodshed addition..so i won't go into that in this post... 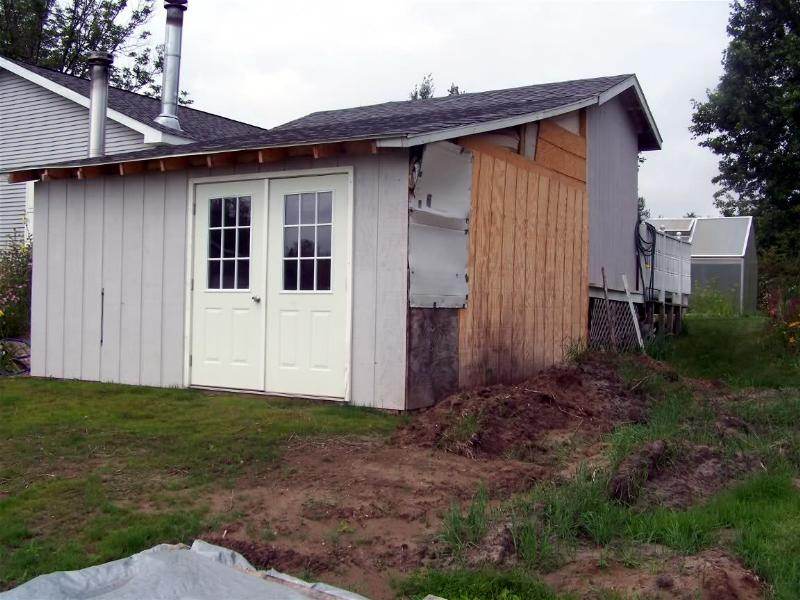 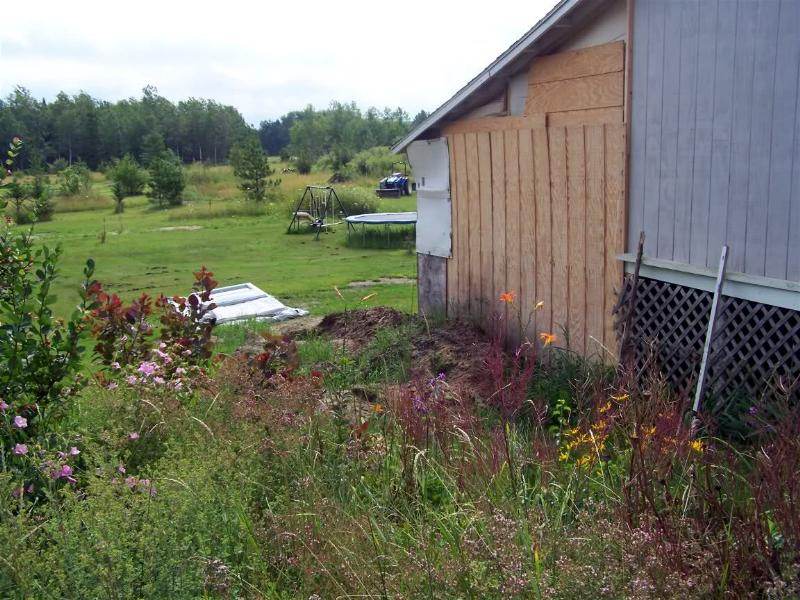 here is a photo of the woodboiler addition we put up in November, and the unpainted wall is the temporary North wall we put up quickly to keep the snow out..but that was never finished last year..just tacked up..the buildinig you see to the right of it up on the deck is our old woodshed 8x16 that we used to kee pour fireplace wood in..the new building is on the ground level beside it and is 16 x 16 with the wood boiler on the south side of it and steps running up to the deck where the old shed and new shed meet...we no longer keep wood in the upper shed as it would be too hard to get the wood in and out of it..so it is a utility shed now. 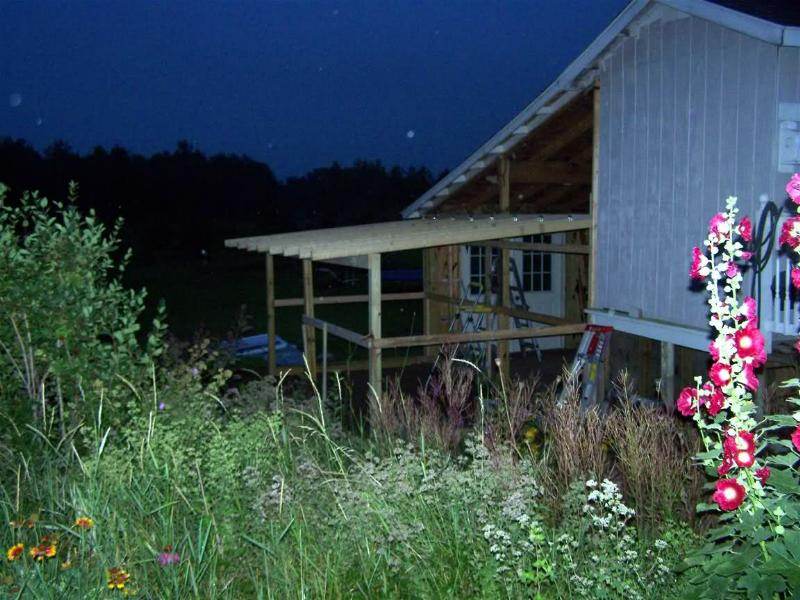 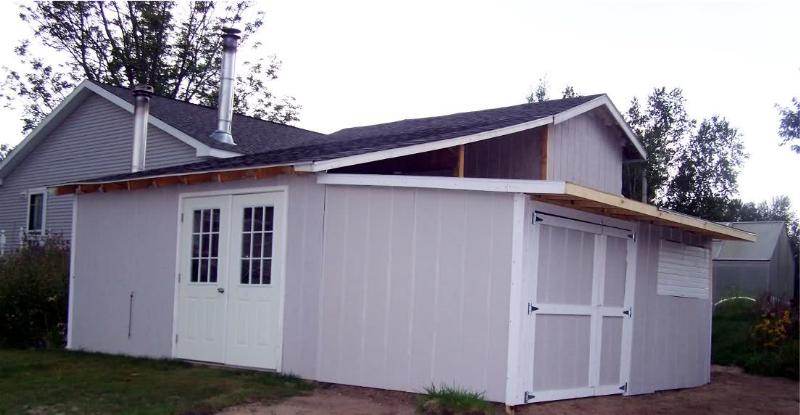 Well this is as far as we have gotten with the addition to the wood boiler building now..this is a good shot cause you can see the original buildinig up on the deck behind the wood boiler building we put in in November last winter with the double doors on the east side..and the addition that we are putting on the north end of the wood boiler building...simply for holding firewood..i put in a sideways hatch that lifts up and can be held open with a hook..that you can stand in the truck or on a trailer and throw wood through to that end of the wood shed building..and then there are double doors ..one smaller than the other..that can be opened wide enough to bring the tractor bucket through with loads of firewood from our woods or from a pulp load pile we are cutting on.

and then the bucket can just dump it inside the building..

i made the right door smaller..that one will be the most used of the 2 parts of the double door so the larger one is held by a barrel lock at the top..when the doors are both open they will not interfere with the wood hatch that is lifted up on the right..so all areas can be open if we have a big load of wood going in at one time.

we still have to put the felt and shingles on the roof, flashing and siding up on the triangle shape area above the addition..where the temp wall had been..and a lot of painting yet..etc..but we should have a dry area for wood by the end of the month.

this is also the area that is being regraded and seeded yet this fall (if we have time with wood still needing to come in to the shed)..and it has been pouring rain here again..so as the original post said..when it rains ..it pours..we have standing water everywhere now and more coming down !!! thank god for tha french drain

That is keeping the stove burning 24/7.

Taking into consideration I would only be heating the one house and my winters are (in a normal year) milder than yours, I wonder how much wood I could be expected to burn?
Brenda Groth
pollinator
Posts: 4437
Location: North Central Michigan
26
posted 11 years ago
we have heated with wood for 38 years..we used to average 12 to 13 cord a year with our various wood stoves we have had over the years..last year was the worst winter here in over 30 years..so i'm assuming it was making it worse..we probably also used propane as well as we didnt get the wood stove even going until in November..and we ran out of wood in about March or April...we could have heated longer if we had had wood..


we are hoping to try to cut that amount in half this year by cutting the wood in larger pieces and not splitting it..