Posts: 228
10
posted 8 years ago
So I'm quite interested in the wofati concept. I have a perfectly serviceable house, but I would like to make some climate controlled storage, and also a home office/studio that was away from the main house.

Wofati (as I understand it) would also provide protection from the only real natural danger we face around here: bushfires.

Here's the thing - I live on pastureland (so what trees I have, I can't cut down), and I also live on a (essentially) flat floodplain.

I saw an architecture show recently where an "eco" guy was using wooden I-beams, which he said were extremely strong by weight of wood. Also, because they can be made from young trees, because there is no significant width of grain timber required. Apparently the centre section, which is a fibreboard product, is made without glue.

The next problem would be what would happen if things flooded. Presumably I would need to raise the "floor" level so that the dirt under the 'roof' stayed dry.

Or am I fundamentally chasing the wrong technology here?
Jay C. White Cloud
Posts: 2413
46
posted 8 years ago
Try earth bag technology if you want something new, otherwise as a traditional folk architecture consultant, I would go with adobe system of some type. What was the vernacular architecture of your region?

Posts: 228
10
posted 8 years ago
My region only appeared in the early 1800s, so we got English architecture.
Jay C. White Cloud
Posts: 2413
46
posted 8 years ago
Then I would look at vernacular architecture from regions of the world similar to yours. Adobe, rammed earth, sod, and the like. If you had considered shipping in LVLs, which I strongly would not recommend using, could you not import Gum or Euc timbers from someplace near by? If shipping is inhibitive, then the above methods are your best bet. Let us know how it goes.

How high would you need to to go to get above the 100 year flood level? Could you build a mound or terrace that would put the floor of your structure well above flood level?

Apart from aesthetic and philosophical considerations, you could build with engineered lumber rather than logs. You could even use steel or reinforced concrete, I suppose. Use what is available and affordable.

If you have a lot of straw available, you might want to consider using it, either by itself or as straw-clay. Put thick stucco or a thin cob wall on the outside, plus a thick green roof, and you could reduce the danger from wildfires a bit, though I would not pretend to say it would would make it fireproof, as some wildfires burn very hot and that heat can penetrate several inches into the soil (a wildfire a little South of here last Summer was burning trees a couple of feet into the ground. It also reduced my sister-in-law's cabin to ash and cracked the slab, and it was located 50 yards beyond the edge of the trees.)

Posts: 228
10
posted 8 years ago
Hi Andrew, probably only a couple of feet. I guess I'm thinking that short of getting 'clean fill' from outside, I'd be digging a lot to get all this dirt together.

That being said, engineered timber is a renewable resource, and much more efficient (grams of wood per weight of load bearing) than natural timbers, so I don't think it's a bad way to go. There's an energy input of course, but I suspect it's nothing like what would go into steel or concrete.

I'm thinking of building a 'Wofati mini' (perhaps only 4' high) and using it for storage and research.
Andrew Parker
pollinator
Posts: 519
Location: Salt Lake Valley, Utah, hardiness zone 6b/7a
5
posted 8 years ago
When you say 4' high, is that the height of the floor above grade or the height of the total structure? If I was going to be moving substantial amounts of dirt around anyway, I would go for a full-size structure.

Sounds like your property badly needs a pond. That should give you the dirt to make the platform, berms and green roof.

To get some ideas on how to build a wofati in the plains, search for earth lodge, pit house, round house, grubenhaus, grub-house, burdei, zemlyanka.
Erica Wisner
gardener

posted 8 years ago
If your area is not woodland, there's quite a bit of passive-solar design both traditional and modern that's worth looking at. Both desert and island building styles will use less wood than traditional forest structures. One surprising way to find similar climates is to look at your region's primary products, and then look at competitors who grow the same things elsewhere.
For example, Oregon grows most of North America's hazelnuts, and Turkey grows most of the world's hazelnuts. That's not a place I would have guessed was similar, but now I can look there for ideas. Looking to culturally similar regions, or places that people go for similar vacation experiences, can also be informative. Some building styles depend on cultural practices (like how many generations live together, or sleeping sitting up, or removing shoes + eating on the floor, or needing an indoor loo so your neighbors can't murder you in the dark on the way to the outhouse) that might not be universally applicable.

I posted this in the main Wofati thread and thought I'd add it here too.
WoFaTi is a Woodland concept, but these turf houses are used in more open country. I guess if you can grow sheep, you can probably grow one of these (and build a sheep-proof roof...).

The re-creations are using plastic only for repairs/restoration. Traditional waterproofing is birchbark between two layers of soft, cushy soil - very similar to the cardboard-protected plastic idea. More birchbark is used on top of that if available, and the sod above acts like a kind of heavy windproof net to divert some of the water and hold everything in place.

Check out the wall drainage systems, air gaps for preserving timber, footings & drainage for the poles, and living walls - not just a sod roof, but sod 'fur' down the sides. 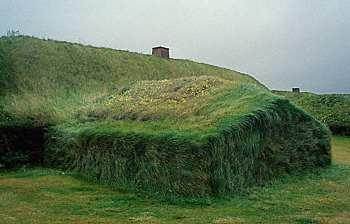 These are reputed to last about 30 years - might be more if they had access to decent birch-bark nowadays, or more practice laying and controlling the drainage. 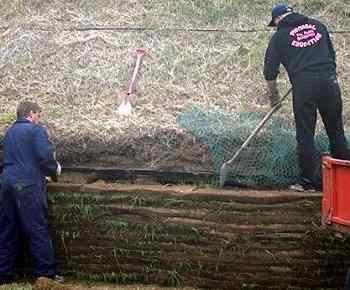 The writer also says the 10th century version was much more comfortable than the 19th century Iceland turf houses - he's done overnights in both.
Ready to move in? 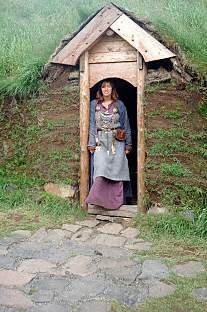 Turf grass isn't something I see in my mental picture of Aussie landscapes.... don't bring my name into it if you get caught on night-time raids on local golf courses...

My mental image of traditional Aussie shelters includes bark lean-tos and caves; I think that's mostly American movies talking. I wouldn't be surprised if there are more sophisticated traditional shelters that have been destroyed or ignored due to prejudice during colonial times. The 'legendary' aborigine just toughs it out, but the 'legendary' North American savages and the actual archeological evidence from the Mound Builders, "root cellars" of New England, or Northwest long-houses are comparable to most of the contemporary Mesoamerican, Middle Eastern, and Northern European building achievements in similar climates. Just not a lot of castles; I guess we opted out of the Iron Age or something, but we're making it up now.
Well worth researching - there might be one lone, unpopular archeologist or cultural anthropologist who could tell you a wealth of detail about appropriate traditional design. In the absence of historic evidence, take a good look at the oldest local houses for hints about placing features like eaves, porches, etc.

I checked you web site out, and you have a beautiful grass land. Erica's suggestion would be very suitable for a structure that is not only traditional, and durable. If done well can last many generation and be comfortable at the same time. I did see some nice trees in the back ground in some of you photos, so you could do timber framing, but you have mention you don't care for that.


The aesthetics of 'natural' timber are lost on me - I like right angles That being said, engineered timber is a renewable resource, and much more efficient (grams of wood per weight of load bearing) than natural timbers, so I don't think it's a bad way to go. There's an energy input of course, but I suspect it's nothing like what would go into steel or concrete.

I haven't been able to put a finger on it yet, I know of more folks from the land "down under," that don't care for large timber architecture. I even have folks I know, Peter and Isabelle Harwood of http://www.timberframes.com.au/ that mention how difficult it can be to get folks to understand the craft and it's benefits. Most "Wofati," are earth, stone and timber, just as the founder, (Mike Oehler) intended them to be. Now as far as "right angles," are concerned most Asian timber frames are nothing but "right angles," they don't use oblique bracing only horizontal bracing because of all the seismic activity, (and I think they are like you and I, preferring right angles.) Now I must admit, I am biased, I specialize in Asian timber framing, I like "right angles" more than obliques and I tend to go with the originators of a craft. I must completely disagree with your assessment about engineered wood. The industries behind them "hype," the sustainable/renewable aspects way beyond the truth of it, they are not stronger than most log or timber truss assemblies, and we haven't even gotten into their "carbon footprint," or energy to produce them, which is closer to steel and concrete than you might think. Also, in your part of the world, you have some of the strongest timber, (grams of wood per weight of load bearing) in the world.

Posts: 228
10
posted 8 years ago
Most Aussie timber is a bloody nightmare to work - probably why we enjoy burning it so much

The rationale for a small 4' ceiling "root cellar" structure would be that it would require a fraction of the earth to be moved around, and also require less timber strength due to the reduced span, whilst providing practical experience in building these things, and allowing me to assess how well the theory works in my climate, etc.

Thanks for the turf house photos Erica - I have seen a similar approach used in a DVD on pig stalls, to provide some solar insulation. 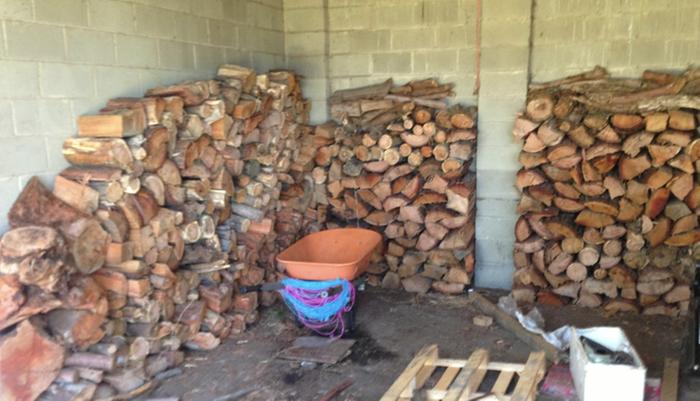 Andrew Parker
pollinator
Posts: 519
Location: Salt Lake Valley, Utah, hardiness zone 6b/7a
5
posted 8 years ago
While checking for references on "burdei", I came across an interesting ebook on the subject, Ukrainian dug-out dwellings in east central Alberta. It is an interesting read, if you have some time.

Romanian bordei could be very spacious and nicely finished. Here is a series of photographs of bordei at the Castranova Village Museum.

The Bordei Project is an attempt at reconstructing a bordei village in Romania.

Roofs could be pitched or arched or flat, and covered with sod, clay, thatch, or a combination. The pits could be less than half a meter or over two meters deep, depending on soil conditions and severity of the winter.

The design was developed on the steppes thousands of years ago and was used widely until about WWI and sporadically after that, so I guess there is something to it.