posted 8 years ago
Hi all,

Wondering if folks know about resources for finding drought tolerant cultivar of white clover for use as a low growing perennial groundcover?

perhaps there are other leguminous plants that grow similarly to clover?

Good sources of seed? or name of cultivars that people have worked with?

garrett lacey
Posts: 72
Location: Edmonton Alberta
12
posted 8 years ago
I did some research on this, and I seem to recall birds-foot trefoil and subterranean clover being possible candidates. Black medic would probably work quite well if you could find its seed in any quantity.
Leila Rich
steward

Posts: 3999
Location: Wellington, New Zealand. Temperate, coastal, sandy, windy,
105
posted 8 years ago
I grow several clovers. It's a wonderful plant.
The variety commonly known as 'Dutch white' is drought-tolerant in my climate, and great for paths as it's low-growing.
Just be careful in bare feet; the bees love it!

Also been researching this.

here's a place that seems to have it all, and even sells seeds properly inoculated.
Grow Organic Bulk Seeds

here's a general list of what I am aiming to try.

it's ok, probably advantageous, to make even your groundcovers a polyculture.

lots of these would make good chicken forage.

posted 8 years ago
Hello one and all, I will try to replay to each of you individually, since you all gave me so much good fodder for conversation.

Garrett:
We have native birds-foot trefoil (Lotus nevadensis) which I have endeavoured to find and save seed from. It is very hardy plant! grows out in what I call "no mans land" kind of conditions. However, broadcast seeding been very unsuccessful... any success with that?

From what I observe, it only grows on our property in open field conditions. It may be that it prefers a certain kind of soil biology? So I anticipate it's use be naturally restricted to more open Savannah areas.

Subterranean clover seems like a good crop for dry exposed soil conditions as well. Perhaps it would be useful in the annual garden for a path mulch. I will try and track down some seed.

Leila:
Thank you for the referral to Dutch White clover. That is one of the primary white clovers I have been able to find with any reference to drought tolerance along with growing in the understory. It is on my short list of things to move forwa with.

Paul:
It is my expressed intentions to develop a polycultural ground cover. What I am wanting to experiment with is the use of clover as a low-growing ground cover to snuff out the sorts of plants I want less of, without directly shading the plants I do want. Currently I primarily use Dryland Ladak alfalfa as the herbaceous layer legume. Because it is so hardy and it is easy to find seed seed. But it does not provide much help decreasing plants population I do not want. 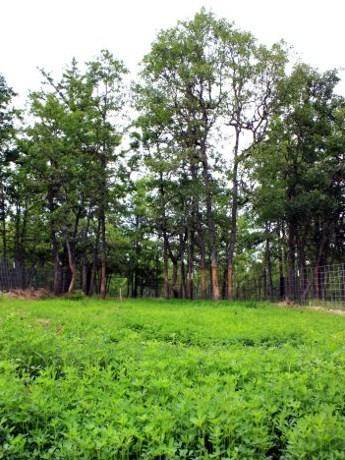 This is Ladak in its first year growing in late spring. This patch was established first as a monocrop with the intention of mob-grazing it in spring while broadcast seeding to allow the animals (sheep) to punch the seed into the moist soil.


In a lot of areas I seasonally let pigs forage in the understory. this somewhat helps destroy weeds, but it also created enough soil disturbance to ensure the weeds continue to germinate. What I want is more "weeds" that the animals like to eat, so the grazing pressure is more even. Plants like tumble mustard (Sisymbrium altissimum), and Yellow Dock (Rumex crispus) are common but very unpalatable to animals. And of only marginal use to me. 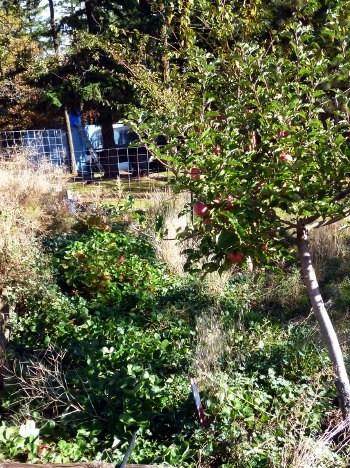 This is a young row of apple/pear. Strawberries are growing in the center of the image against the terrace wall (which you can't really see because the strawberries are so big!) Alfalfa based polyculture is on either side of the picture. You can't see anything else because of the tumble mustard (the brown stuff) is so thick despite having been continuously pulled out and cut back throughout the spring. Hence why I am looking for some kind of weed suppression. The mustard very competitive, not very productive in terms of leafyness, it sucks up nitrogen, and hardly anything likes to eat it, particularly when dry.

What I would like to try in an area is establish a good mat of clover, and then punch wholes in the clover and plant a mix of annuals and perennials like:

These are already plants that do well in certain areas. It is just a pain in the butt to have to weed so much in the spring and summer in order to allow the annuals to thrive.

Thanks for sharing your insights, it has given me some things to go ahead with.

The alfalfa field looks wonderful.
Where do you buy this particular strain of alfalfa?

Also, did you establish the field without irrigation?

I think perhaps you shouldn't worry about weeds if you are going to be spot planting more human-centric growies.

If you sheet mulch a nice buffer around your new plants (releasing more alfalfa nitrogen locally), then once its well rotted you can throw a little more topsoil on it and reseed it with your mix, without the weeds.
Then the clover, etc, will help keep a weed-free buffer around your food plants.

Just theorizing. I have not tried this specific idea yet but have seen others use it successfully.

posted 8 years ago
The field was established without irrigation. through the summer it thinned out a bit, with plants dying back. As time goes on each individual plant will be getting bigger.

I purchased the seed from the local grain silo's farm store. It is the dryland non-irrigated alfalfa that is grown for hay around these parts. Mid-Columbia Producers is the name of the company/coop that technically owns the store (and several other grain silos in the mid-columbia region). That info is only relevant if you are in the region though.

Andy Reed
Posts: 85
4
posted 8 years ago
Clover, by itself is a very poor groundcover.
Most clover is pretty tough, and once established will survive droughts. The most drought tolerant clovers are the ones with the smallest leaves, the smaller the leaf the better the drought hardiness. However drought hardy does not mean good competitor. Alfalfa is drought hardy, but does not compete well.

You obviously have rich soils if dock and mustard are your weeds, If you can get NZ clover it's probably the best developed for N fixation and toughness.
Leila Rich
steward

Andy Reed wrote:Clover, by itself is a very poor groundcover


Andy, could you explain more? I've got lots of the stuff, and I'm pretty sure it would be happy all on its own if I let it, but I make it share!

andrew curr
Posts: 288
Location: Deepwater northern New South wales Australia
1
posted 8 years ago
Trophey White clover and its history is a good story of how we could /should breed plants
Basicly a collection of naturalized white clovers from our district and bred at our local ag station
unfortunatly PBR"s sold to glossy brochure seed producers

we have to forest our farms and farm our forests

Travis Campbell
Posts: 46
Location: North Idaho
7
posted 3 weeks ago
This is something I have been looking into lately and from my research Kura (caucasian) clover seems to be the most drought tolerant perennial clover. It also has the benefit of being extremely tolerant to heavy grazing and mowing short because it has creeping rhizomes and is able to spread that way. There is also a Kura/White Clover hybrid called Aberlasting which seems to have the drought and grazing tolerance of Kura clover and the seedling vigor of white clover because one downside of pure Kura is it seems to be difficult to establish from seed as it requires specific conditions and no competition from weeds.

Another option is crownvetch which is also a drought tolerant spreading legume but it is a bit taller than most perennial clovers similar to alfalfa. It was commonly used as an erosion control plant in the past and seems to compete better with grasses than clover. It is now considered somewhat invasive and is used much less than previously, however for our purposes it probably could still be very useful.

posted 3 weeks ago
Travis, thanks for reviving this topic.  I think Dutch White Clover is a great option for drought tolerance—by me it always stands up to the driest weather.  Your hybrid sounds even better.

I have seen Crown Vetch used as an ornamental and as long as it was mowed around it never got out of control.  Actually my eccentric neighbor growing up tried to get his entire (small) front yard to get covered by a few crown vetch plants.  Though it did spread it never took over the yard and later was easily brought under control by mowing (I mowed his yard).

I would think that if it were being grazed on an at least semi regular basis it would not get out of control.  My neighbor wanted it to grow out of control but it wouldn’t do so.