Joel Hollingsworth
pollinator
Posts: 2103
Location: Oakland, CA
9
posted 11 years ago
In a thread on asparagus, and as part of a larger effort to plan for a new property, Jennifer asked what crazy plan of mine seemed more feasable now that I know some grapes fruit in rich soil.

The basic idea is to have a maze of waist-high or taller garden beds, edged with woody species, tall enough that the paths between them form a network of chicken paddocks.

Early on, this would start by planting a careful pattern of shrubs, vines, and a few trees (especially along the north side), and building a garden wall in hugelkultur style with a framework of pallets, and filled with municipal wood chips and garden waste, all topped with soil from inside the perimeter.  The area inside would be planted with grains and pulses where allowed by more permanent plants.

Once the earthen wall was complete (high and deep enough to contain the chickens and their noise), and enough feed was stored away, a chicken coop could be built inside.  Pallets or wickets would be used to define several paddocks, usually between double rows of woody plants, leaving a "moat" that the chickens have perpetual access to just inside the outer wall.

As time went by and organic matter became available, hugelkultur walls would replace (or just bury, if that's easier...) the pallet/wicket barriers.  In some places, wickets or other temporary barriers would remain appropriate, but the area available for intensive gardening would increase as paddock productivity increased.  Ideally, garden wastes and pests could easily be thrown into the current paddock or into the moat from where they were picked up.  Used mulch, chicken waste, and picked-over garden waste would naturally be a significant source of material for new bed construction, and some height would come from digging down into the soil under the paths/paddocks.  The new beds would also presumably allow some of the woody plants to root from the side.

As the edges of the raised beds, pigeon peas are an obvious choice, and it's nice to know grapes might also be appropriate.  With a fairly wide path, foliage from these can be mostly trained away from the surface of the raised beds.  Some locations would need a shade-tolerant species like beaked chestnut.

I would want a lot of wood chips or twigs on the paths, and so purslane and white clover seem like good candidates for chicken forage.  It might also make sense to build a little curb near the wall, in which to cultivate forage plants that don't stand up to traffic or break through mulch so well.  As Paul has mentioned, plants can also be added up the sides.

I'm toying with the notion of super-productive biomass plants as part of the system, especially early on...maybe a 55 gallon barrel full of giant knotweed.

This idea has been bouncing around in my head for months, it's good to see it typed out.

rose macaskie
Posts: 2134
7
posted 11 years ago
I like the idea of a english permaculturist who has a really pretty red pond weed that you can use as mulch. My father had a pond and the things that grew in it, reeds i think, tended to start to fill it up so that if you can see the plants that fill up ponds as usefull as mulches it puts a positive side on their invasiveness.
My chinese article talks of using the scat of the fish as manure and i have an google article that talks of how very much fish farming, really big fish farms, poison rivers both because of the excessive quantities of fish scat and because of the insecticides you have to use to prevent the fish getting fish fleas and other health problems, more evidence that factory famring creates too big an impact on just one bit of country and the need for farming to be divided into small farms. So using the manure from the fish for the land is seems to be a good idea. agri rose  macaskie.
Brenda Groth
pollinator
Posts: 4437
Location: North Central Michigan
26
posted 11 years ago
be very careful with the giant knotweed..it can take over huge areas of property..as we had a problem with it here.

it is fairly tasty..but the dried stems really were fairly useless although ours did grow about 15 ' tall.

i think your plans sound really sensible other than the knotweed..

you can start your grapes with cuttings, we have done that here..esp if you have a grape you really like.

also your beds sound like they would be really good for gross feeders like coles and curcurbits..they really love the compsoting and rotting materials..

i have been building up areas for berries with a similar method of decyaing wood, paper, cardboard, weeds, leaves, grasses, etc..and they are doing very well...this is on top of an area that had at one time been overfarmed badly..and was hardpan and nutrient poor.

Posts: 1596
Location: Cascades of Oregon
91
posted 11 years ago
I've started something similar to what you have described but living a in a cooler climate I have altered the heights of my raised beds.  Starting at 1 foot on the southern edge of my garden space  and the following ones increasing in height as they get farther north. The highest bed at four feet is against a fence that refelcts and protects that last bed.  Additional beds are being filled with compost and are brought on line as they are filled. I keep all beds the same size 8ftx3ft so all coverings are the same size and  a movable rabbitt hutch can be placed over any bed as they go out of production or are empty and need to have compost added.
Chickens run free between the beds.
Berries are along the fence that surround my garden space on all sides but the North side.
I am considering doing the same in my new green house increasing the height of the beds and increase the thermal mass with the additional soil. My supposition is that more light to the plants in the higher beds if they are higher than those in front.
Perhaps using the deeper northern most bed as a chimney for a rocket mass heater.

posted 11 years ago
Joel.... can you show a picture of your complicated notion, it sounds very interesting.

Uniform-sized beds do make sense for cold frames or animal tractors.  It doesn't get very cold here, and I'm more inclined to use wickets and ramps rather than confine animals to the plot, so I'm hoping I can get away with oddly sized and shaped beds.
maze.PNG 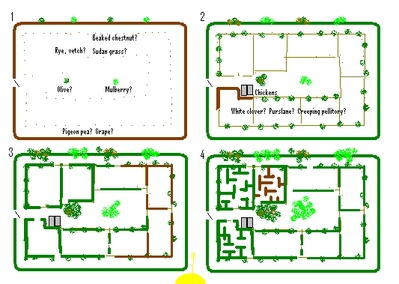 rose macaskie
Posts: 2134
7
posted 11 years ago
brenda groth, i have a vine i want to take cuttings of, how do you do them? thanks rose. agri rose macaskie.
rose macaskie
Posts: 2134
7
posted 11 years ago
My brother in laws  John Seymour organics book, i don't have to cross cheque what i say, as i write  so this is from memory, says that raised beds  should be narrow the right size for you to work them from the paths comfortably. the right side from the right side and the left side from the left side of the bed.
He says that both the old french market gardeners and the chinese ones used raised beds that they kept very high in nutrients always covered with plants, no leaving the bed fallow, to grow vegetables. Full of cabbages and corn salad in winter . These people grew all the vegetables for the towns, and were able to grow a a great quantity in a small space because of their highly fertilised composted raised beds, of course in the old days people drove in horse drawn vehicles so there was lots of horse manure and the chinese use human manure, so near a city was a place were a lot of manure was availiable.
He is talking about your organics, permaculture, growing vegetables close to each other and not leaving bare bits of earth except he points out that this is also the chinese method or french old and spuper efficient method of growing vegetables. No leaving  the erearth fallow just lots of manure,or bare because its winter and you are not growing much it is better for the earth to be covered so plant somthing anyway anything you grow serves for compost.
In the book I have he is writting for people with small gardens so the permaculture ideas fit in with how to feed yourself in a small space ideas.
Having small beds you can work from the sides without having to step on them is not only for comfort, it is so you don't compact the earth plant slike light lose earth.  agri rose macaskie.

You seem like a thinking person for sure... I admire that
Jami McBride
gardener

posted 11 years ago
Great pic Joel.  I love your idea -

To make sure I'm following you....

The areas 'moats' where the chicken's will roam will be planted with chicken forage, and have a walking path running through made of wood chips.  What about their digging, what if they kill-out an area, or an area goes barren for some other reason - this is a common problem when chickens are kept in restricted areas.  So how are you planning to keep ahead of the chickens

And the plant beds will have some kind of movable fencing to keep chicken's out - right?

An organized free-rang set up to be sure.
Are those mazes in the front beds on the last picture for the chickens?  Or is that something else I'm looking at?

Joel Hollingsworth
pollinator
Posts: 2103
Location: Oakland, CA
9
posted 11 years ago
The moat is just within the outside wall, and I'm expecting it would go fairly barren.  Deep mulch is about the best I can do for that.  The major point is to slow the spread of some species into (or out from) the garden, especially invasive plant species.

I might also give them perpetual access to a keyhole-shaped path toward the center, although the more I think about it, the more I favor putting the coop just inside the moat.

The remaining paths would be closed off by movable fencing to allow vegetation to re-grow.  The idea is that the foot traffic would be light enough to not harm the plants much.  Paths like this (which even stand up to machinery) would probably appeal to chickens, for example, although they're irrigating more than I'd want to:

The maze-looking structures would be arranged to give a maximum area of raised bed, and a minimum area of path.  I imagine cuttings and weeds from a bed could make up for the lack of forage from the area it was built over, so reducing the area of forage shouldn't be a problem, but planting a few rutabagas would help if the need arose.