Hanford and the Columbia water shed.

Landon Sunrich
pollinator
Posts: 1703
Location: Western Washington
22
posted 8 years ago
So this isn't meaningless drivel - but neither is a discussion about subsidies - so I guess this belongs in this forum


I heard a story the other day on NPR about the Hanford Nuclear Site on the upper columbia in WA state. As this happens to be my home state this issue is near and dear to my heart (as are subsidies I spent some time in a place called Egypt so if anyone ever wants to talk about that disaster... )

Those who are not familiar (and let me stress here, I am only familiar with Hanford in the most general of terms - having grown up here but never going out of my way to read up on it) :

Hanford was one of the first (the first?) reactor in the united states it was built in the Early 40s and was used produce plutonium for the first atomic bomb. Needless to say there is a mess. How big a mess? I don't know - let's discuss (!)

So what I hear on the radio is - they're going to try to bind the radio-active elements with phosphates. and I'm just wondering aren't phosphates what causes massive algea blooms and 'dead zones' in the ocean? Could there be a fungal solution?

Just milling around thoughts. Both Idea's and worries. It seems the great task of my generation, if we are brave enough to take it up, is going to be to clean up after the mess our parents and grandparents generation made while trying to preserve what we've inherited. So I'm trying to be informed and thinking of how to move forward. I mean its great to pan your own little lot of paradise but what does that mater if the rest of the world keeps slipping towards ecological oblivion right?

I would consider this a "general conversation" thread as long as we don't go to far out there.

John Elliott
pollinator
Posts: 2392
91
posted 8 years ago
Landon, there is no fungal solution. In fact there is no biological solution, the radioactivity at Hanford needs to be removed from the biosphere completely.

Unfortunately, being the first plutonium production reactor that was built, they really had no idea what they were in for as far as how to dispose of the nuclear waste. Now that waste sits in tanks, and they try to think of how to get it pumped from leaking single wall tanks into double walled tanks, and then if they fail, where can they put triple wall tanks, and.......oh, it's a mess.

The best way I can think of is for them to set off a nuclear device 2000' down (or more if the geology is right), make a huge cavern with the explosion (like was done in Operation Plowshare), and then pump all the high level waste into the hole. Hope that the geology is right and that it will stay there for a few million more years.

The problem of nuclear waste is one of being painted into a corner. There is just no way to get out of that corner without making more of a mess, somehow, somewhere. Chernobyl is one corner, Fukushima is another, Hanford is a third. At least the radioactive material is mostly contained at Hanford unlike it is at the other two. For those, there is only the Sneferu solution -- put one of these on top of the mess: 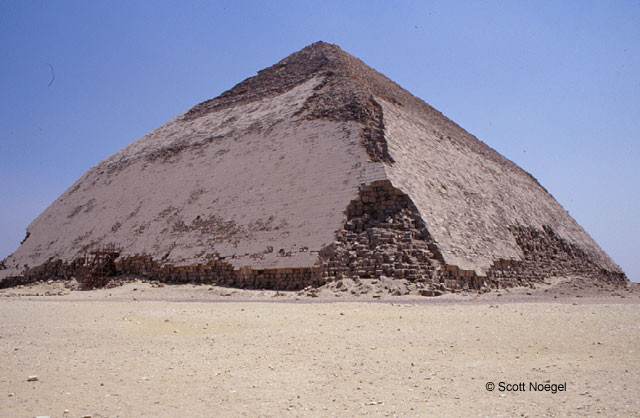 posted 8 years ago
Thank you for bringing this up... I've been wondering why everyone isn't freaking out about Fukushima.... too many other things to worry about?
John Elliott
pollinator
Posts: 2392
91
posted 8 years ago

pal lane wrote:Thank you for bringing this up... I've been wondering why everyone isn't freaking out about Fukushima.... too many other things to worry about?

But you have less to worry about. Who was it that said "If there were four corners to the world, Belize would be in one of them"?

There is not a whole lot the rest of the world can do about Fukushima except watch. I'm sure that after they have tried and failed a number of times, the Sneferu solution will occur to them.

John Elliott wrote:Landon, there is no fungal solution. In fact there is no biological solution, the radioactivity at Hanford needs to be removed from the biosphere completely.


^
Rats. I was watching this Paul Stamets talk the other evening and he was talking about 1) using oyster mushrooms in saltwater to clean up oil spills and 2) black mold in Chernobyl I swear he mentioned something about Fukashima as well. I was having thoughts as I drifted to sleep about using mushrooms to accumulate radioactive heavy metals, composting that, growing metal accumulating ferns on top of that, feeding those to more mushrooms, et cetera until reaching maximum concentration of radioactive isotopes - and then throwing the whole mess of it down a deep mine shaft and... - yeah - concrete and lead capstone.

So I presuming that there is radioactive sediment which accumulates in pockets along the headwaters of the Columbia. Perhaps trapped in silt behind dams? I mean I presuming here so I guess I'm asking - it's not in hanford.govs FAQ

Also the lead engineer (or whoever) they where interviewing spoke of 'binding the radio-active elements with phosphates' and he didn't sound all that enthusiastic about it. Any idea what he was talking about?

I'm learning to use my search bar I swear!

John Elliott
pollinator
Posts: 2392
91
posted 8 years ago
The good thing at Hanford is that the seeps and leaks of radioactivity are small compared to the volumes of the waste in the tanks. So if you do have to mycoremediate or phytoremediate (pick up the stray radioactivity with mushrooms or plants), you won't have a lot of material to dispose of. And yes, it does need to be thrown in a very deep hole and capped rather permanently. The bad thing is that the volume of waste is so large, that what is a small percentage seep is still a LOT of radioactive material.

As far as I know, the seeps have not collected in silt behind dams, they are in plumes that start at the tank farm and head to lower elevations. There are seeps of tritium from the Savannah River Site, but they are not considered problematic, since the time it would take for them to reach the Savannah river is several half-lives, so the radioactivity will be gone. Unfortunately for Hanford, their seeps are moving faster than the half-life, so that is why they worry about it reaching the Columbia river.

"Binding radioactive elements with phosphates" is a way to slow down their movement, but having their movement stopped just confines the radioactivity in one place. What to do then? Rope it off with radiation warning signs? It's still in a place where it can irradiate plants and animals, which if they ingest these radioactive phosphates, can continue to spread the contamination. To get rid of the contamination permanently, you have to dig up that phosphate, put it in a deep hole, and cap it.

Landon Sunrich
pollinator
Posts: 1703
Location: Western Washington
22
posted 8 years ago
Thanks John. I'm going to continue to read about this as well as what the state governments plan is. I may revived this thread at that time.