nit ti
Posts: 4
posted 6 years ago
hello. i have a small area, about 10' to 4' width and 16' long.
by north wall, grass growing around it.
its summer here in israel.
i want to try permaculture technichs and grow edibles.
where to start? what technichs can i use? what to do with the soil? should i try hugelkultur or somthing else?
thank you very much! i will be glad to add more info.
John Polk
steward

You didn't say where in Israel you are located, but the land is typical Mediterranean climate.
Lovely climate, but not enough rainfall in the summer growing season.

For arid regions like this, buried hugelcultures seem to work best. Rather than build a mound 3-4 feet above ground, if you dig a trench underground, and fill it with the logs, this will tend to collect the seasonal rains, and store much of it for later use in the dry months. Keeping the entire thing well mulched will help to keep the moisture in the soil from evaporating into the air.

I once started a small food forest in the northern part of the country - the 'banana belt' (Mt. Carmel) which received much more rain than other parts of the country. We received +/- 30 inches per year, but I know other regions get half of that. And we got none from around May through September.

I didn't know about hugelculture at the time, but I had some berms and swales I built on contour. They collected and stored a lot of the rains, which the plants could use during the drier months. It also prevented the precious water from running off into the Med. Things grew well along these catchments, but I can imagine they would have done even better if I had buried wood into them.

Bare soil is your biggest enemy in that climate. Always keep it covered with either ground cover crops, or mulch. Water is much too valuable to let evaporate into the atmosphere. The more you can keep within the soil, the more the soil microbes will grow, and they are the key to a healthy soil.

nit ti
Posts: 4
posted 6 years ago
thank you!!! its very helpful!
im in the south of isreal, in the northen 'negev', 3 km from the mediterranean sea.
it does make more sense to me to dig and bury and not making a very raized bed.
ill read more about it, should i google 'hugelkultur' or it has another name?
so besides that all i need to fighure is what to plant? how should i start doing that?
i understood i should wait to september and then there are lots of things i can plant.

Posts: 7926
Location: Currently in Lake Stevens, WA. Home in Spokane
317
posted 6 years ago
If you go to the Hugelkultur forum here on permies, you will find a wealth of info.
https://permies.com/forums/f-117/hugelkultur

Yes, the temperatures right now are pretty high for transplants and seeding. Your winters should be mild enough where most things should work. If you can find some seeds for low growing legumes (such as clovers), they are very useful. They collect nitrogen from the air, and put it into your soil. Chop it at ground level, leaving the roots to die and decompose in the soil. Adding as little as 3% organic matter to your soil will double the amount of moisture that your soil can hold! Water is too precious to let either run off, or drain through your soil.

As Sepp Holzer points out: Every living thing on earth is 70% water. Once you have managed your water, you're 70% done.


בְּהַצלָחָה
Aljaz Plankl
Posts: 386
11
posted 6 years ago
Not really a small garden, but i hope i can help you.
We've done a sunken biomass garden in a sub-mediterranean climate with 800mm rainfall, raining mostly in winter time, in summer almost no rain.
It's close to 100m2 surface dug a meter deep with machine.
Then we placed down a lot of biomass - twigs, branches, rotten poles, lots of goat bedding (shit and straw).
Then chunks of grass/soil and on top of that clean soil + compost.
It was planted right away with salad mixture without mulch.
Other beds were heavily mulched with goat bedding and seeded with zucchini seeds in individuals holes in the mulch, later also planted with seedlings of tomato and others.
Goat bedding mulch is great as it's not dry mulch but has lots of moisture which really is important for summer time.
Garden surface is half a meter below original surface area, paths are as close to garden surface and they also have biomass, the whole area is biomass filled, so in winter time this area will get plenty of water acting like a sponge and hopefully helping the garden in summer.
Wind is another factor that dries the garden.
On north we have a forest windbreak, on north east, east and west side there is windbreak made out of biomass and material that was extra (stones, rocks, soil etc.)
We also planted mounds with shrubs and trees (edibles and pioneers) for extra windbreak.
What we are also doing is planting trees on west berm so we shade the strong afternoon sun, so plants can go to rest a bit early.
We like the results!

Another idea i like is this one (drawing, text is in slovenian but you will get the idea).
Diggin as deep as possible, making berms on both sides and using trench filled with mulch for growing area in summer.
Planting is done as deep as possible.
Berms are acting as water flow function, windbreak.
Also here we can't grow winter veggies inside the trench as it's to wet, so we can use the berms.
Berms can be also hugelculture, they work great here in winters. 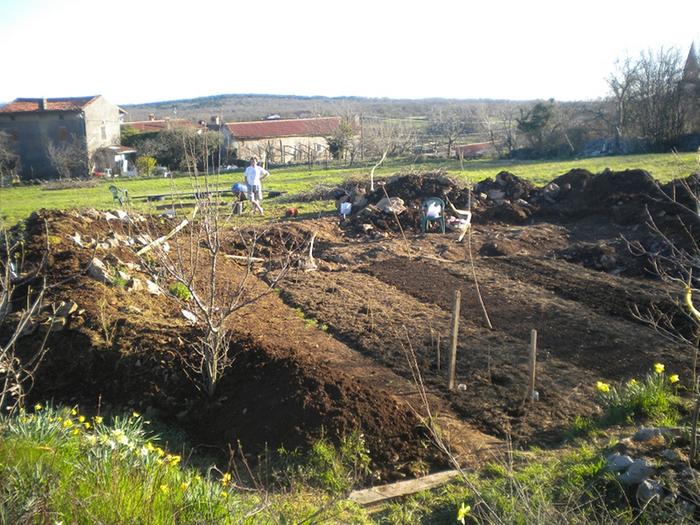 I hope you'll have many years of enjoyment and nutrition from your fine beds!

Best, TM
Renate Howard
pollinator
Posts: 755
Location: zone 6b
16
posted 6 years ago
You may like to look up "wicking beds" as well, you can combine hugelkulture and wicking beds to get the best from both worlds. And since it is so close to your house, also look into greywater, if you have enough of that then water may not be a problem. I second - make sure you have no bare soil - keep it covered!
nit ti
Posts: 4
posted 6 years ago
thanks everyone!!
the problem with grey water is that its not my house, its my parents house.
1. so, im thinking about half buried half raized hugulkultur, i can't dig really deep there.
i have accses to : hay and cow manure (dairy farm) , i could find wood, and garden waste.
2. wicking beds looks cool, i think i won't put the plastic sheet under the soil, the buried wood will help not loosing the water right?
3. you guys think i should try the underground watering pipe like in wicking beds? is it to keep the water from evaporating? will it be effective without the plastic under the soil?
4. how to start finding out what to plant?
Brenda Groth
pollinator
Posts: 4437
Location: North Central Michigan
25
posted 6 years ago
the fact that it is on the NORTH wall makes it a partially shady garden...I don't know much about israel's plants..but I do know that on the north side of my home things grow so much better when we are having the kind of drought we are having now..they are still green and lush with no rain and no water..so you are fortunate that is where you'll be gardening.

place your sun lovers out on the farthest north areas, so they can get some morning and evening sun, and your shade tolerant plants closer to the walls..like greens, lettuces, etc..

you also could grow some vines up from the farthest sides toward the house to give you a nice cool shady spot to sit outside in the garden as well, grapes grow well there don't they ? and Kiwi??

Terri Matthews
Posts: 523
Location: Eastern Kansas
20
posted 6 years ago
How cold is your wet season? Can you plant something when rainfall is due? In California, where I grew up, some farmers raised lettuce during the winter to sell.

Where I live NOW we get very dry summers, but the rest of the year is moist. Some farmers plant wheat in the fall because it will grow in the fall, survive the winter, and start to grow again in the spring. By the time it gets dry the plant is close enough to maturity so that it does not matter.

Other farmers grow corn, and they plant it as early as they dare. Corn has deep roots, and the roots can go deep for the water.

Most vegetables here need to be watered. Asparagus is an exception: it yields far better if it is watered but once the plants are large it can take care of itself. I hear that there is a variety that will go dormant when it is too dry, and then grow again when it rains.