Julie Bernhardt
Posts: 83
Location: Indianapolis, Indiana
4
posted 7 years ago
I have been planting fruit trees and berries in my suburban yard for the last 13 years. When we moved in it only had a chemical treated lawn with 2 trees, a pin oak and a silver maple. Both of these trees are very large. The yard would flood around the maple from run off that came from a field behind us. the septic didn't work which was all in our empty back yard. We redirected the septic with 2 long fingers that went from the back yard around the house and along the side of the front and ending about 20 feet from the silver maple. We built a berm around the yard to deflect the run off and added a lot of soil to raise the overall height of the area. The septic feeds the maple on the south side. I have some elderberries growing near the trunk on the west side and about 20 feet east of the trunk on the berm is a couple paw paws, spice bushes, crab apples and small evergreen bushes that are just under the canopy edge.

Is there anything I can plant under a huge silver maple closer to the trunk?
I cannot afford to remove it and my husband wants it because it shade the house.
It's shady but grass grows well most of the time under it until late summer dry period when it thins and on the east side where there is shade from the small trees on the berm in the morning and shade from the maple the rest of the day the grass was thin so I just spread mulch. This area is damp sometimes also from the septic.

I have planted the berm that edges the yard with fruit trees and bushes for wildlife and put in a recirculating stream along one side. I still have a lot of open spaces. I planted 2 sassafras trees but after 8 years they are still small. They are about 25 feet north of the silver maple and are now at the edge of the tree's canopy. I could remove them if necessary since they have trunks only about 4 inches diameter.

I have been adding trees but not in regards to guilds. I just under planted with daylilies, hostas and wildlife bushes to feed the birds. I would like to turn the area into a food forest but I don't know what I can put near the maple that would survive.
Julie Bernhardt
Posts: 83
Location: Indianapolis, Indiana
4
posted 7 years ago
Was this a stupid question, a difficult question or am I just not welcome here?
I asked this question at another permaculture site and didn't get any response there either.

Surely I'm not the first person that wanted to build a forest around a not particularly desirable tree or two that were already there.

The grass is doing well so I can just leave it lawn.

Emily Brown
Posts: 61
Location: Maine
11
posted 7 years ago
Hi Julie, thanks for bumping your thread so that more people could answer. I highly recommend this resource:

You can do a search for a shade tolerant tree or shrub with high edibility rating in your zone. I did a quick search for zone 6 and it said that there were varieties of pears, plums, peaches, cherries and many berries among other things that will thrive in full or partial shade where you are. You might also want to look at edible climbers.
Julie Bernhardt
Posts: 83
Location: Indianapolis, Indiana
4
posted 7 years ago
Thanks for answering. My concern is not so much for the shade as the competition from the roots. Silver maples are thirsty trees that should grow along rivers instead of suburban yards. The roots grow dense matts . I used to have hostas in sunken pots under it and the roots grew through the mulch and down into the pots and after a few years still choked out the hostas
I was going to cut out some dead and thin some lower branches a couple days ago but I found a humming bird's nest so I'm going to wait and trim it about a month from now.
Alder Burns
pollinator
Posts: 1601
Location: northern California
208
posted 7 years ago
I would consider woodland ephemerals. These are perennial or bulbous plants that do most of their growing early in the spring, before deciduous trees leaf out, and then die down and are dormant from midsummer on. Thus they make use of the sunlight and the moisture before the tree really kicks into full growth. A visit to a mature deciduous forest in your area will show you some adapted species....things like trillium, bloodroot, dogtooth violet, and so on come first to mind. Some of these plants are important medicinals (ginseng and goldenseal, for instance) and edibles (violets, ramps, spring beauty and others). As an aside, many common spring bulbs are also adapted to this situation (things like daffodils, grape hyacinths, etc.) provided the soil doesn't flood frequently. If the spot is quite soggy in the spring you could consider plants adapted to that, like skunk cabbage, possibly fuki?
minyamoo metzger
Posts: 19
posted 7 years ago
Hi Julie.
I had some of the same questions as you as I also live in Indiana, and have a couple maples in my yard.
my quest led me to southeastway park.
I noticed the maples had few things growing under them, a couple tiny grasses (I don't know the names of ANYTHING) and some little rosemary looking things.
While walking around I came to the conclusion I liked the dirt and cool feel under the trees.
so knowing mulch holds water I simply mulched under mine.
No boarder (there is none in the wild) and make sure you leave plenty pf room from the base of the trunk to the start of the mulch.

I didn't go all super deep with the mulch, I'm a slow and steady type, planning to use my techniques over multiple seasons instead of doing a ton of work using a ton of resources all at once.

I'm looking forward to all the leaves, limbs, and maple syrup from my maples, also just outside their perimeter is the best grass in the whole yard.

Another technique I employ on my maple in my front yard is to let the grass grow tall about 3 feet around under the maple, about 2 or three times a season I cut it down, I also throw many of the fallen limbs inside this perimeter.
I am trying to use this to build up a mulch layer without ever importing anything.
The trees really bring in the water and sun, they also bring in the bugs, worms and things that eat them. The more you let them keep, the better of they'll be.
That's why they live hundreds of years when we don't ef with them.
Julie Bernhardt
Posts: 83
Location: Indianapolis, Indiana
4
posted 7 years ago
Thanks. You both have given me things to think about. I do have a few woodland plants under other trees like jack in the pulpit, ginger and trilliums. tree just under I was afraid the maple would just choke them out so I never tried them there, I did have a few daffodils there a few years ago but they stopped coming up. I have a thick layer of mulch about 5 feet out around the trunk. I also throw the fallen limbs back under it. I dump my kitchen scraps there too sometimes.
I was hoping I could plant some type of fruiting trees or bushes maybe 10-15 feet from the trunk but still under the canopy. I was concerned that the tree's roots would still choke out new trees. I have a couple sassafras trees just under the canopy edge and they are growing very slowly. From what I've read they are fast growing trees.

It's really good to hear that someone else around here is interested in this type of landscape. I live about 7 or 8 miles from Southeastway park. I used to set up a table for Indiana Wildlife Federation at Bugfest. I haven't done that for a couple years now though.

Jessica Gorton
Posts: 274
Location: Central Maine - Zone 4b/5a
26
posted 7 years ago
I have two huge maples (my firewood guy says they are silver maples, but I only have his word on that at this point) in front of my house almost on the road. The house is back maybe 30 feet from the road, the maples are about 20 feet apart and both are just 5 feet or so off the road, the road is 2-3 feet above my yard and it slopes down almost immediately, though the ground around the maples' trunks is very mounded at this point. When I say huge, I mean it - they dominate the front yard, and most of the street around them. The house is 223 years old, and they are close to that. They are pretty spectacular trees, and I'd like them to be around for a while.

But, I'd also like a bit of a privacy hedge along the road, if possible. So my plan is to sheet mulch with newspaper and then hay, grass clippings and leaves this summer and fall. Then over the winter, as I prune and collect some wood, I'll lay it down on top of the mulch, and then create a hugel bed in late winter/early spring. In it, I'd really like to plant some edible hedge plants - I can get free highbush cranberries from a neighbor, and I'd like to try some hazelnut as well, maybe juneberries or elderberries. I'm hoping that by creating the hugelkultur I can give the transplants something to grow in before the newspapers break down and the maples start competing. I'm also really hoping that doing this won't hurt the maples - I won't be disturbing their existing root structure, just adding soil on top of it. I don't know that I'll get much in the way of production from anything I plant under there, it gets pretty shady in the summer...but we shall see.

Here are a few pictures to illustrate: 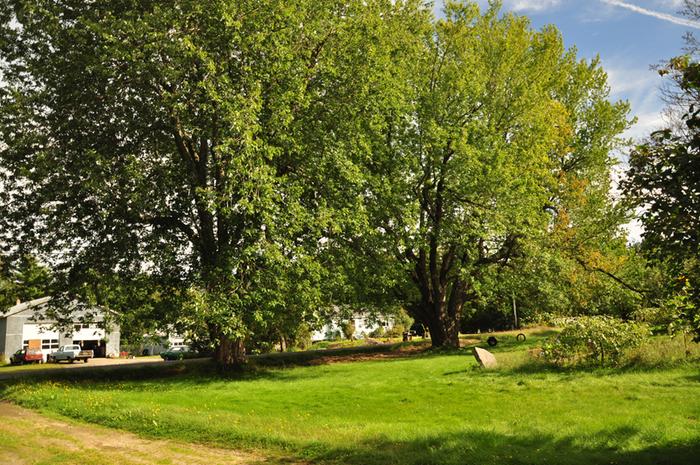 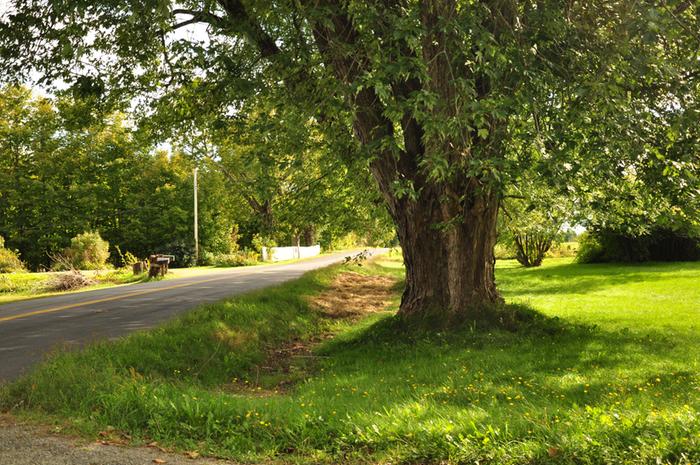 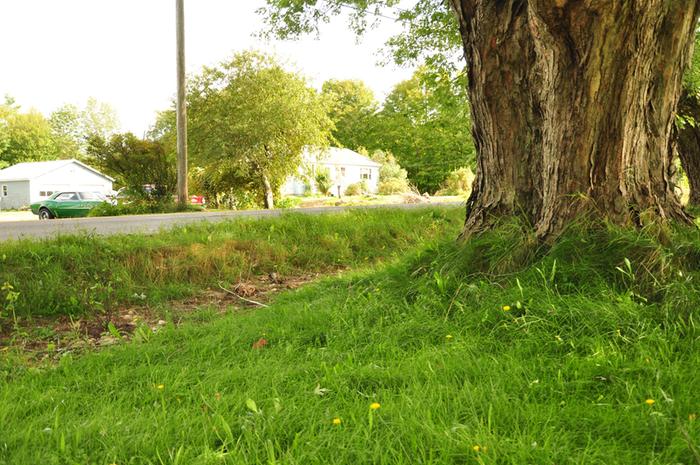 John Smelser
Posts: 1
1
posted 1 year ago
I know the original post is very old... but I still thought to make a response... by way of saying what CAN BE ACCOMPLISHED under these trees if they are all you have to work.

posted 1 year ago
You can also tap Silver Maples to make Maple Syrup.  With big Silvers like in this post you can also get almost as much sugar in the sap as with Sugar Maples in a stand.

Julie Bernhardt
Posts: 83
Location: Indianapolis, Indiana
4
posted 1 year ago
This is how it ended up. Elderberries do very well here and its ringed with daylilies and daffodills.
9EC4D693-8EEC-4DB5-9DA2-4F8E3AA05DBE.jpeg 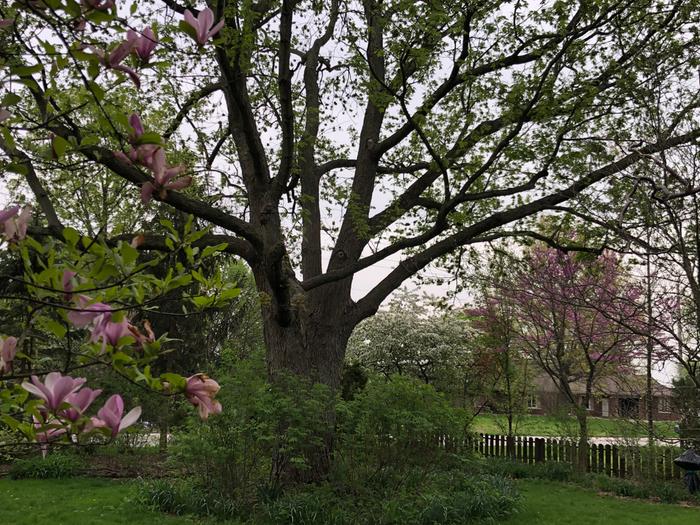