Landon Sunrich
pollinator
Posts: 1703
Location: Western Washington
22
posted 7 years ago
So I noticed that fresh doug fir cones are often sticky with sap. So I stole some. I put um in the bag with the last of my white chantrels (which keep pretty well even with no refrigeration btw) and I'm shakin' um up a couple times a day.

posted 7 years ago
More info for me Landon ! I am not sure where you are going with this.

Landon Sunrich
pollinator
Posts: 1703
Location: Western Washington
22
posted 7 years ago
I am hoping the spores of this mushroom (which grown in association with this tree) will stick to the cones and when I plant them and try to get them to grow, they'll both grow together

posted 7 years ago
OK, I am a little slow on the uptake. I am with you now. Sounds like a very creative idea. Let us know how it works out!

But really it was one of the simplest silliest Ideas I've had in a long time. Just "Wow these are sticky - I bet things stick to them"

I would love to get back to y'all and let you know how it works, but I'm guessing it will be at least 15 years until I see fungal fruits if it does. I'm going to try planting them near the one 95 year old one on my property.

I was doing some research today because I hate going out most particularly on days like today. You know, hot sunny ones. I'm just not made for those sort of conditions.

I found out that Doug Fir (or Psuedotsuga Menziesii as the white man want's me to call it) is NOT a shade tolerent species. So I plan to plant them on the south west facing edge about 15 feet from a large Doug Fir, 25 meet from a medium/young maple, and avoiding the shade of what may be the oldest lastest Pacific Yew in my region (that's not quite true - but almost) There are also a good stand of Hemlocks - a shade tolerent conifir which is quickly dying a becoming desiesed because in the last 15 years the neighbors have taken all their trees out, they've lost their community, and are now getting full sun. They may end up coming down and being replaced by fir as well if I could get the money up for it. But I unfortunitly need to worry about paying banks and insurance agents and all the others who are conspiring against the Yeti.

So yeah. Ask me again in 20 years and maybe I'll have an answear for you. Hopefully it wont involve loosing the only place I've ever truly cared about.

Apologies for the poor spelling, I have no right mouse button to click and the red line of scolding is telling me a bunch of stuff isn't spelled correctly, but I can't do the quick thing and auto correct it - so sorry.

Landon Sunrich
pollinator
Posts: 1703
Location: Western Washington
22
posted 7 years ago
Well this happened about a week ago. What kinda fungus? WHO KNOWS!? but it does subjectively look like a forest floor fungus and not a counter top mold to me. Man... someone might make a whole lot of money on this idea and 'snot gonna be me. What a world 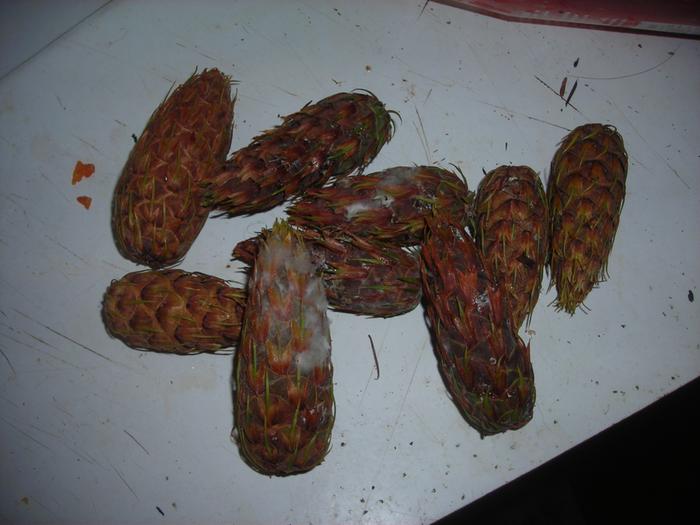 John Elliott
pollinator
Posts: 2392
88
posted 7 years ago
Looks like mycelium, but even if you put it under a microscope, there will be painfully little to get a species ID from. About all you can do is look for clamp connections and see if that narrows it down any. Fungi are best identified by their fruiting bodies (mushrooms), then by microscopic study of spores, but when all you have is a tangle of mycelia, you're pretty much SOL.

And it's not a silly idea. If you plant those cones in some rich dirt, you could get germination and then next spring when the weather warms up, you have a seedling that is already pre-inoculated with its mycorrhizal partner and both are ready to grow like a weed.