Anyone Build a Jolly Roger?

Building a Pyrolyzer for Biochar production. The Jolly Roger Ovens (JROs) seem most promising before getting into large masonry units. I've attached a file with the design. The basic difference with this JRO variant is the addition of a double barrel to the lower stage. So I'm calling this the JRO-d.

Welcoming any thoughts to this or a better spot on the forum to post this. 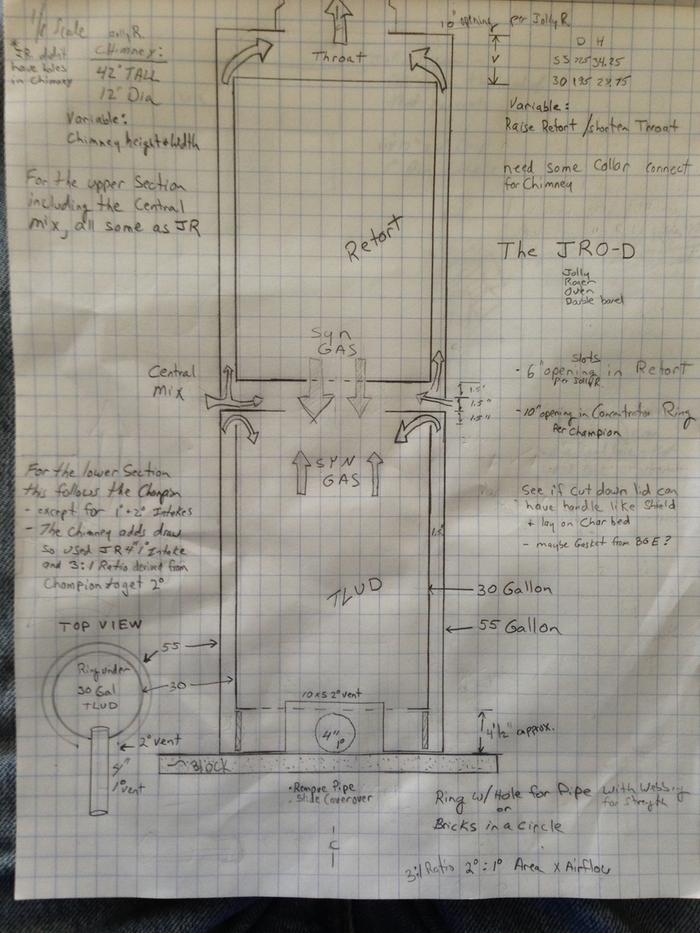 posted 7 years ago
James White : For every one this is a busy time of the year, but it has been three weeks, do you have some pictures !?!! Big AL !

James White
Posts: 7
posted 7 years ago
Hello Al- Thanks for posting. I have the 30 gallon drums (heavy duty thicker steel) and should have the outer 55 gallon drums this weekend.

I'll post pictures. I wasn't sure if there was any interest.

posted 7 years ago
J.W. : O.K., I know what you mean about heavier barrels, start there and tell us how you made out cutting them ! And save a pattern ! Big AL

James White
Posts: 7
posted 7 years ago
Absolutely I will document everything. I'd like to have discussions about primary and secondary airflow ratios, etc.

I'd like to see how low a temp I can apply to the top Retort. Lower temp char with more oils left = bacterial food.
Morgan Morrigan
Posts: 1400
Location: Verde Valley, AZ.
posted 7 years ago
a commercial charcoal making insert

Peter Robinson
Posts: 3
posted 6 years ago
I think that the solution to the carbon dioxide problem that is killing the earth with the greenhouse effect and subsequent global warming; is as follows:

Grow trees, which takes carbon out of the atmosphere. Some of the wood can be burned, which is a carbon neutral process in that you are returning the carbon back to the atmosphere.

Some of the wood can be made into charcoal, ground up and mixed with the soil or put into lakes and the ocean. My chemistry is about 60 years old but I can't think of a way to burn (oxidize) the charcoal once is is ground up and mixed with soil or water. Carbon CAN be oxidized by burning or adding the necessary chemical compounds. My question is, "Are there any natural processes that will oxidize carbon?" A further advantage is that carbon absorbs whatever it is in contact with. The finer the particles of carbon the greater the surface area and thus the greater the absorption of other materials. The masks for tear gas have activated carbon in them to absorb the tear gas. I am certain that there are many active things in the soil or water that can be absorbed by adding carbon to the soil and water.

I have about 8 acres of my farm where I can grow trees as an energy source and to perhaps convert the wood into charcoal, grind it up and mix it with the soil on the farm.

Blake Wheeler
Posts: 166
Location: Kentucky 6b
3
posted 6 years ago
It's all a carbon neutral process Peter. Anything that removes carbon only removes it until it dies. Global warming is a weak theory, and the avoidance of supporting scientists to debate others shows that clearly. It's a cycle, one of which the earth has been through numerous times and has survived just fine. Expecting things not to change is folly. I'm not saying people shouldn't take steps to limits environmental damage, but I am saying the greenhouse effect is bunk.

Can't say I support dumping charcoal into the ocean either. Yeah, it's only a drop in the bucket, figuratively and literally lol, but I doubt it would end well in mass scale. The simple fact is even the "experts" don't understand what's going on well enough to not warrant skepticism.
Peter Robinson
Posts: 3
posted 6 years ago
When something dies the residue is carbon and other minerals. To convince me that growing something that then dies is carbon neutral, you would have to show me that the carbon is then oxidized to form carbon monoxide and or carbon dioxide. The oxidation takes place by burning with oxygen or by decomposition by biological activity.

On the subject of global warming.... 98% of the scientists have the opinion that global warming is real and a threat to the survival of mankind. It is my opinion that the remaining 2 % are paid by the organizations that want to continue to burn fossil fuels or are ill informed and hope to make a name for themselves by taking a position that is contrary to the majority.

I am 79 years old and I remember the clear skies of 1940, when you could see for hundreds of miles. I am a private pilot and from 10,000 feet, looking down, the earth is relatively clear but when you look horizontally you realize that you are looking through pea soup. I flew from Phoenix to Mazatlan, Mexico. It is 770 miles. For the first 400 miles the air was cloudy with pollution. When I was over Mazatlan, the air was crystal clear. Cabo San Lucas, Mexico was 204 miles away and there was not a trace of pollution in the atmosphere. The only comparable view I have had, has been to look at photos taken from orbiting space ships.

Incidentally, I am a scientist. I have a bachelors and a masters degree in engineering and all of the course work for a PhD from Stanford University. I was awarded 5 US Patents for my inventions when I was a staff scientist at Motorola Semiconductor Products in Phoenix, Arizona. In 1970 I chose to leave Motorola and to buy my farm in Camp Verde, Arizona.