J.D. Ray
Posts: 110
2
posted 7 years ago
I've just finished my Sketch-Up design for a Managed Intensive Grazing setup for pigs and poultry. Since I'm designing for the future, it's an untried design. I invite advice and criticism. I might as well, it's the Internet.

The description on the 3D Warehouse page gives an overview of the system I have in mind, though here's a copy of the description:


Managed Intensive Grazing (MIG) setup for pigs and chickens. Central pig sty is fixed, providing eight gates for allowing hogs into various pasture areas. Fixed cross fencing provides four paddocks, 100 feet on a side each. Design allows ten pigs 5000 sq. ft. (half a paddock) of grazing for two weeks, completing one lap around the yard in sixteen weeks. 100 chickens rotate around a paddock, 2500 square feet per week, four weeks in one paddock, then rotate into area pigs vacate. Management of paddock rotation is such that chickens enter a space where pigs haven't been for two weeks, allowing parasites to die and forage to re-grow.

J.D.
J.D. Ray
Posts: 110
2
posted 7 years ago
Some stills attached for those of you without SketchUp. 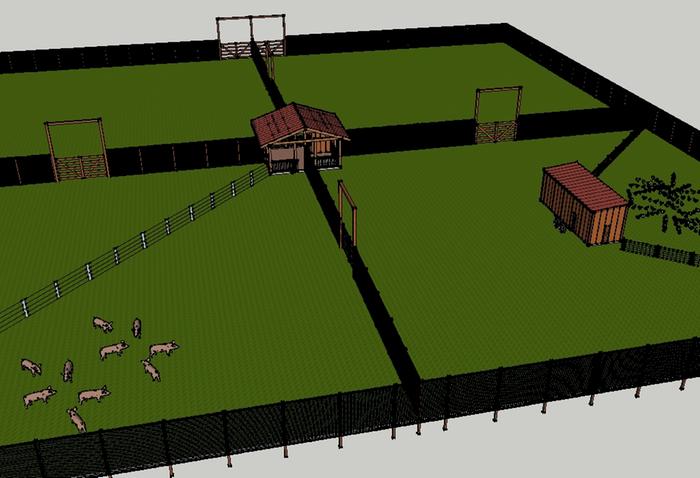 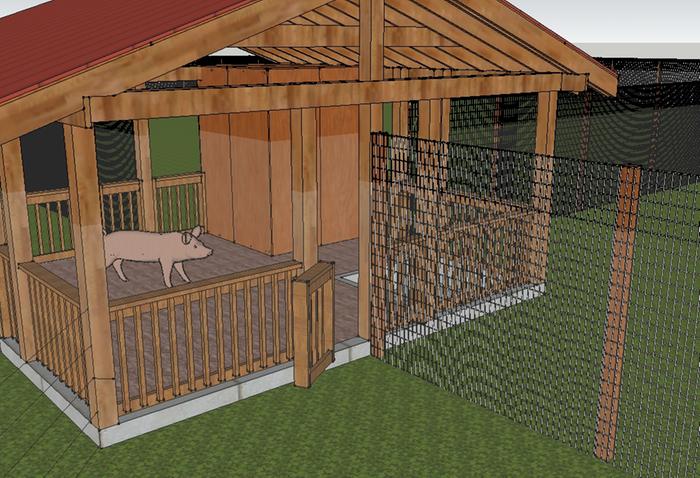 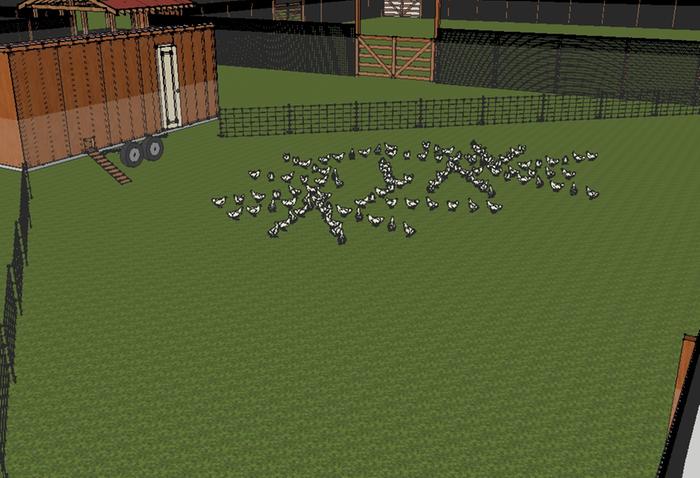 Walter Jeffries
Posts: 1114
Location: Mountains of Vermont, USDA Zone 3
63
posted 7 years ago
I wouldn't make it so complicated. We co-graze our pigs and poultry. They interact fine.

Is the very tall fencing for the pigs, the chickens or to keep predators out?

J.D. Ray
Posts: 110
2
posted 7 years ago
It's for predators. One thing I haven't drawn in (because it's seriously difficult in SketchUp) is a net that would stretch across one entire quadrant (quarter acre). They can be had for a couple hundred bucks, and are light enough (~40 lbs) to be moved regularly. That ends up being the reason for the complicated fencing.

Does it seem like the general plan of rotation should work? I've been reading a lot about forage crops lately, but most of the info seems to be targeted at large, commercial operations that have goals different from mine. It's still valuable info, but the conclusions aren't that helpful. On the upside, it looks like the same forage plants for pigs and chickens work out.

Thanks for the feedback.

J.D.
Bob Blackmer
Posts: 32
Location: East Greenwich, Rhode Island
1
posted 7 years ago
Locating your gates in the corners will make herding pigs easier. Most times they will follow you to the next paddock, especially if you have food, but not always and there are sometimes stragglers. Those stragglers are always the fastest and most wily too. Or so it seems.

Seeing as the chicken house is movable, I think the pig house should be too (huts on skids). Its more tractor work, but it eliminates the idea of a "sacrifice area" (the high traffic area near the center of your wagon wheel design). This does a few things.

Each time the house gets moved back into a paddock its placed in a different area, so the area of high impact is moved allowing the previous spots more time to recover. This leads to a more productive paddock seeing as most "sacrifice areas" end up being significantly less productive than the rest of the paddock.

Secondly, "Sacrifice areas" tend to take more labor and inputs to avoid problems for parasites and disease. Avoiding them helps with the problem.

Also, no need wait to move chickens behind pigs. Unless the pigs took it all down to dirt which they shouldn't have.

All of these suggestions have other things to consider, ( ie; time for management, money for inputs) so make a design and management plan that works best for you.

I just realized that with this design, moving the gates for the pigs really isn't necessary, seeing as you would already have a funnel at the center to move pigs though. That being said I don't favor of the central house design, so I would move the gates for easier management.
Peter Ellis
Posts: 1536
Location: Fennville MI
60
posted 7 years ago
Listening to Salatin talk about his grazing program, he brings the chickens in behind the cattle after three to four days, because he wants the chickens to break the fly life cycle. Gives time enough for fly eggs to hatch, and then the chickens eat the larvae before they pupate into flies. A two week break would allow the flies to complete their life cycle without interruption and the chickens would not get that nutrition.

The central sty seems "efficient", easy to access from all paddocks. But then I think about a small area that is being used by the pigs 365 days of the year for several hours out of every day, and that doesn't sound like it is going to be a very nice place. Making the sty movable and shifting it around the paddocks with the pigs seems less destructive to the land, even if it is somewhat more work.

I don't have any personal experience yet, so use appropriate quantities of salt

J.D. Ray
Posts: 110
2
posted 7 years ago
I'll look into the lifecycle of a fly and see what I can integrate here. I didn't realize it was that fast.

The entire idea behind this system was for finishing hogs, so they wouldn't be in there for an entire year. Instead, they'd do one or one and a half laps around the system, then get slaughtered, after which the sty would sit fallow for several months waiting for next year's batch of weaners. Mind you, this system is really for small producers, and not really designed to be efficient for large-scale growers like Salatin or our own Mr. Jeffries.

Thanks for the input, though. I am thinking about a good way to make the sty portable. My first set up will be much less complicated than the very permanent sty drawn here, primarily just a 12x12 shed roof with rails and gates on the side (no wallow, no storage room, no concrete foundation). After letting a single batch do a lap around, I'll see how the land fares, how the pigs fare, and what the condition of the sty is. From there, I'll make a determination about how to move forward.

JD
Johnny Niamert
Posts: 268
Location: Colo
3
posted 7 years ago
Do you have a recommendation for me wanting to learn SketchUp better? Any youtube series or anything else?

I have some experience with 2d cad, but can't seem to figure this out on my own very well. I've only played with it for a short bit.
J.D. Ray
Posts: 110
2
posted 7 years ago
Give this one a shot. It gets you the rudiments of using SketchUp. From there, it's a lot of repeating things on a variety of scales.

BTW, if you're doing any sort of complex drawing, make everything a component. You'll thank me later. Also, if you want to do anything at the level of developing a model at the level of each board or other small component, observe the value of the scale tool rather than making each component you want a different length or something unique. You can PM me for tips if you get to that point.

I really like your pics but what you've done isn't Managed Intensive Grazing (MIG), its really the wagon wheel approach. I think there are some diagrams in the PDM and definitely several threads here on permies. No need to reinvent the wheel, so to speak.

MIG puts many more animals into a small area - it's also called MOB grazing, and rotates them quickly.

J.D. Ray
Posts: 110
2
posted 7 years ago
Thanks for the tip. There are so many terms, it's hard to keep them straight.

Walter Jeffries
Posts: 1114
Location: Mountains of Vermont, USDA Zone 3
63
posted 7 years ago
Mob Grazing is just one extreme of Managed Intensive Grazing. The proposed system would fit within the realm of MIG and can be used either at the Mob Grazing level or lower as desired. Breaking it into additional cells would give more flexibility. The wheel is merely a layout, not a "Not MIG" situation.

Wes Hunter
pollinator
Posts: 525
Location: Missouri Ozarks
76
posted 6 years ago
Someone correct me if I'm wrong, but you shouldn't have to worry about flies on your pigs, and therefore about fly larvae in the pig manure, so rotating the chickens after the pigs isn't going to do anything in that regard.

I'd just let the chickens have the run of the whole shebang. They'll pick through the grain that passes through the pigs, saving a good deal in feed costs if your stock numbers are appropriate.

In general I'd concern myself with a temporary solution to get started, so you can try out the design for a while before committing to a permanent or semi-permanent building. I often find myself tweaking things here and there, and sometimes making major changes, and I'd frustrate the heck out of myself if I started every project with the permanent solution I thought was best at the time.
Walter Jeffries
Posts: 1114
Location: Mountains of Vermont, USDA Zone 3
63
posted 6 years ago
Flies are a reality. Whether you have pigs, sheep, cattle, goats, chickens or no livestock at all. Flies exist. Having chickens reduces the fly population dramatically for a radius of about 1,000'. Livestock manure is a great food for flies. If there is food there will be more flies. Chickens break apart the manure patties and eat the flies. We don't buy commercial hog feed or commercial hen feed nor do we buy grain. They get almost all of their needs from the pastures in the warm weather. In the winter the chickens eat pigs.

Wes Hunter
pollinator
Posts: 525
Location: Missouri Ozarks
76
posted 6 years ago
Fair enough. I was referring to flies whose larvae is passed through an animal's digestive tract, which seemed to be what was being discussed above, and I've never noticed that with any of my hogs. (Of course, I could just be flat wrong.) Cattle are another story, of course, which to my understanding is why Salatin times his cattle and chicken rotations the way he does--so the chickens scratch through the cow pies and eat the fly larvae before they hatch, not to consume adult flies that are attracted to the manure.
J.D. Ray
Posts: 110
2
posted 6 years ago


Walter, can you expand on this?

JD
Walter Jeffries
Posts: 1114
Location: Mountains of Vermont, USDA Zone 3
63
posted 6 years ago
Chickens get to eat pigs in the winter. Each week we take pigs to market. There are meat scraps left over. The chickens get those. This replaces their summer diet of insects which is part of what they eat on pasture. The chickens also eat hay, same as the pigs, hay replaces their summer pasture forages. Not as good but it gets one through the cold season.

R Scott
pollinator
Posts: 3653
Location: Kansas Zone 6a
117
posted 6 years ago
Do you do anything to the pig scraps to prep them or let the chickens do all the work?

What do you do with the scraps in summer?