The Sun and Cardinal Direction Construction

posted 7 years ago
I've noticed, when I lived in different houses, that rooms facing the sun 70% of the day received way more heat than that of rooms facing opposite. Later I learned that this is a simple and er... obvious thing to conclude, because the sun beat on that surface for far longer than the one opposite. This also allowed about two hours of passive heat keeping the room warm during the night, even when the air was circulating.

So that got me thinking about how I would go about building my Dome Home, a design for a house which I discovered to be vastly superior to more traditional ones, but also requires a lot of forward planning and careful construction(once the 'earth glue' is in place, there's no turning back!).

The design for my future home will have some semblance to this floor plan: 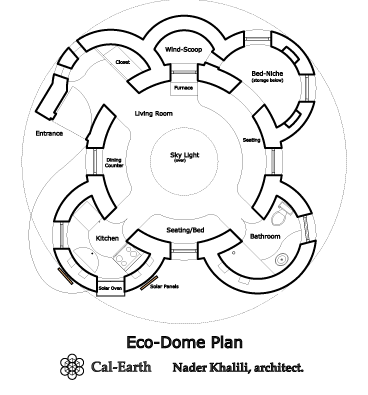 Though the model I saw on YouTube was a bit smaller than I really want my house to be. It will probably be as much as 1300 square feet. With enough upper room for a second floor.

Not exactly a tiny home, but this is going to be more or less the type of house I plan to grow old and die in, and probably give to any progeny I would leave in my wake. The dome design and fireproof materials would yield a very simple to maintain but highly effective dwelling space that could feasibly accommodate an entire family and provide maximum protection from the elements, and other possible threats. I plan to incorporate modern architecture with ancient techniques, either building directly inside a forest or at the edge of one.

Along with this dome design, I intend to have Solar Energy being harnessed in as many ways as possible. This means either a solar farm adjacent to the structure, and/or solar panels built-in directly on top of it. Also, I take advantage of the proper cardinal alignment with the sun to provide proper lighting in the house, as well as adequate heat during the cold days, should I desire it(I handle below 30'F surprisingly well. Probably my hairy legs...).

The roof of the core structure, I'm thinking, could have a grid of windows passing over where the sun should arc over the sky, or at least as accurate to the sun's path as possible, to provide the kind of lighting I would need. I can't draw it up that fast, but imagine a dome with a slice of windows arcing around it, facing where the sun passes the most at an angle. Or an icecream scoop with a different flavour arcing in a thin slice with the round curvature.

With this arc of windows will also come four to six steel reflective blinds, for when we don't need that much light/heat.

My main question is: Does this make sense to people who are a lot more familiar with solar techniques than I am?
Thank you

"I'm useless, but not for long. My future is coming on."
"Earth turns to gold in the hands of the wise."

Brian Knight
Posts: 554
Location: Asheville NC
8
posted 7 years ago
Domes are appealing for their energy efficient shape and resistance to high winds. Some of the other benefits mentioned are not intrinsic to only domes. There are many more downsides in my opinion; Cost and difficulty to construct, awkward furniture placement, extremely poor resale. One of the most common construction defects, flashing is hard enough on a flat surface. I can only imagine the difficulty of getting it right on a rough surfaced curve. Arcs, curves and circles are expensive and often have negative psychological effects when combined with our dwellings.

Perhaps most importantly is the downside relating to your question. Round homes are not a good fit with passive solar design. One of my senior design projects in college was a model that was a half circle with the flat side facing South (North in southern hemisphere). You want a relatively long portion of the shape of the home to face due south or as close to it as possible. This makes it easier to get the 9-12% south facing window to square foot ratio that most passive solar designs aim for.

The problem with arcs and circles facing south is that only a portion of the south facing windows are getting sun during the day. A cloudy morning or afternoon could result in only half the gain that an un-curved plane of windows would see. If the arc is very slight then a well performing design is possible. Fl is fairly far south and having a less than perfect design may work just fine.

As for the pictured Eco-dome's passive solar performance, I think the one window would have nearly an unnoticeable benefit.

Jennifer Wadsworth
Posts: 2679
Location: Phoenix, AZ (9b)
194
posted 7 years ago
One of the things to remember about the sun is that it is at a different angle in the sky during different seasons. Here in the northern hemisphere, the sun rises in the NE in mid-summer, arcs fairly high in the sky overhead during the day, and sets in the NW. During mid-winter, on the other hand, the sun rises in the SE, is at a fairly low angle in the sky during the day, and sets in the SW. Just now exaggerated the sun's height is in the sky is dependent upon the latitude you live at.

The upshot of all my blathering is that the sun does not rise, set and arc across the sky in the same location every day of the year (unless you live on the equator). Therefore, windows placed to "catch the sun" need to be placed to capture the sun in at a particular time of year (probably winter to capture passive heat gain). Also, if you plan to build "in" a forest, your solar panels will have to be at some distance from the house and the forest to capture that light. OR the trees that shade the south side of the house will have to be cut down - which would be counter productive if your goal was to live amid the trees.

While I enjoy domed ceilings and roofs, architecturally speaking, I've found for myself (and I am admittedly sensitive when it comes to spaces) that too many round/curved edges make me ....edgy. I feel very unsettled - perhaps because there are no beginnings and endings in "round" and therefore I find it hard to be settled and centered. During the first PDC I took - we took a tour of some alternative architecture. One of the places we went was a large church that was made up of three connected, round, domed buildings. I became so agitated during that tour that I had to step outside several times and just breath. Finally I gave up altogether and just waited for the rest of the students to come out. Only one other person had a similar reaction to mine, although several were surprised that they didn't like the feel of the building more. A couple of people really liked it. I can't even drive past that building without cringing. (but hey, I'm a freethinker so perhaps there were other forces at work to repel me from the building??